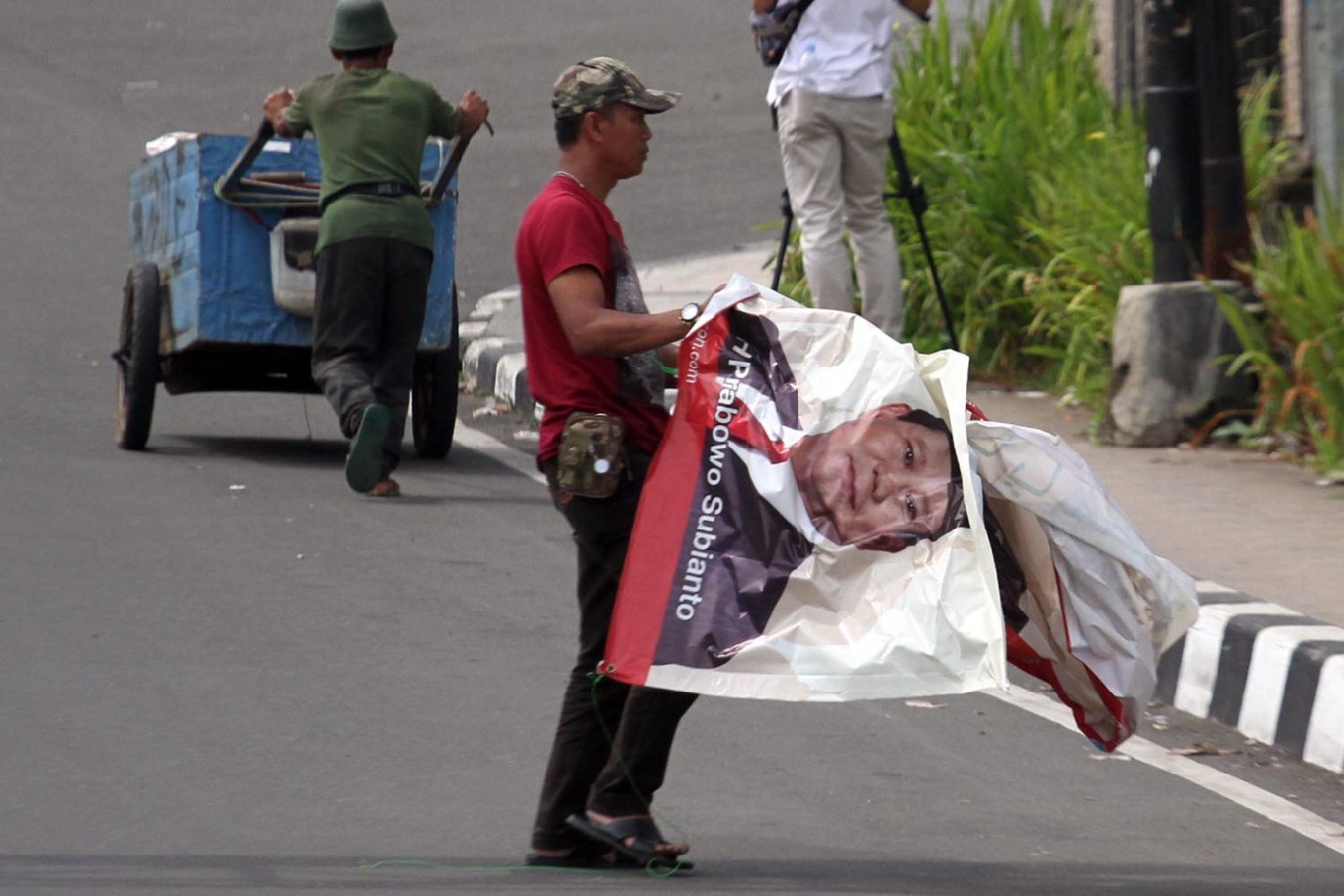 President Joko “Jokowi” Widodo has called for equal access to future COVID-19 vaccines and has urged countries to work together and set aside any rivalries to tackle the pandemic in his first address to the United Nations General Assembly (UNGA).

World leaders sent prerecorded messages to be played at the annual assembly that began on Tuesday, amid more than 31.7 million confirmed cases and more than 975,000 COVID-19 deaths worldwide according to Worldometer data.

The president urged nations to cooperate and take “a win-win approach” to tackling both the health and socioeconomic effects of the pandemic.

“A vaccine will be a game changer in the war against the pandemic. We need to work together to ensure that all countries have equal access to a safe vaccine at affordable prices,” the President said in his address, which aired on Wednesday morning Jakarta time.

His address echoed concerns other countries expressed at the assembly, with many nations seeking assurances from developed nations that they would commit to maintaining open access to future vaccines, fearing the rise in “vaccine nationalism”.

The General Elections Commission (KPU) needs to be “bold enough” to disqualify any candidate pairs that did not comply with the health COVID-19 protocols during the preliminary stages of the regional elections, said deputy chairman Saan Mustopa of House of Representatives Commission II in Jakarta, broadcast on Wednesday at the Denpasar Forum 12.

“[Do not hand down] mere administrative sanctions. If necessary, disqualify candidate pairs that continuously violate the COVID-19 health protocols,” Saan said, reiterating that imposing sanctions would prevent candidate pairs from mobilizing mass rallies that would increase the risk of COVID-19 transmission and new clusters.

On the same occasion, KPU commissioner Hasyim Ashari said that the electoral body was still drafting administrative sanctions for candidates that violated the health protocols.

Prosecutors on Wednesday named Attorney General S.T. Burhanuddin and former Supreme Court chief justice Hatta Ali in their indictment against prosecutor Pinangki Sirna Malasari, who is accused of aiding graft convict Djoko Soegiarto Tjandra while he was a fugitive from the law.

Pinangki is being tried at the Jakarta Corruption Court on charges of money laundering and bribery for allegedly accepting US$500,000 in bribes from Djoko in exchange for her help in securing his acquittal from the Supreme Court.

Prosecutors said in the indictment that Burhanuddin and Hatta appeared in Pinangki’s action plan for securing an acquittal for Djoko, who was a wanted fugitive at the time. The two have denied any involvement in the action plan.

The Corruption Eradication Commission (KPK) ethics board has issued a written warning to Yudi Purnomo, the head of the KPK employees union, for spreading false information.

KPK Supervisory Council (Dewas) chair Tumpak Hatorangan Panggabean said that the board had already found that Yudi had committed an ethics violation, but was reluctant to comment on the specific sanction.

“The decision has been made and that is the board’s authority. Dewas had nothing to do with it,” Tumpak said on Wednesday as quoted by Tempo.

Yudi had spread information on social media regarding the return in February of former KPK commissioner Rossa Purbo Bekti to his original institution, the National Police, for unspecified reasons.

Experts and academics concluded at a forum on the development of Indonesia's democracy that Indonesian democracy had deteriorated at an alarming rate over the past five years through the first term of President Jokowi, due to an "elite-led assault on the democratic institution”.

The experts said that although Indonesia deserved praise for its liberal democracy, which rated higher in democratic quality than India and only lagged behind countries in Northeast Asia like Japan and South Korea, it had stagnated in recent years and had in fact begun to regress due largely to efforts by certain members of the political elite to sabotage democratic institutions.

Eve Warburton of the National University of Singapore’s Asia Research Institute and Thomas Power from the University of Sydney’s Indonesian studies department said that the full-on assault on democratic institutions occurred toward the end of Susilo Bambang Yudhoyono’s second and final presidential term in 2014 and at the outset of Jokowi’s first term.

"In 2014, a consensus emerged that, although reforms had ground to a halt, although democracy was considered stable and when Jokowi was elected, he was expected to protect that status quo ... the past five years have seen mounting evidence that democracy is eroding at a pace not too many people had predicted," Power said at Tuesday’s forum, which marked the virtual launch of Democracy in Indonesia: From Stagnation to Regression?, which he coauthored with Warburton.

Domestic economic growth in the third quarter is projected to contract by 2.8 to 1 percent. With this, a recession is almost guaranteed and is just waiting to be announced officially. With the recession, there is potential the Jakarta Composite Index (JCI) will drop below the 4,500 level this month. In addition, the stock market is still haunted by various negative sentiments ranging from increasing COVID-19 cases to the panned Bank Indonesia (BI) Law revision.

Nevertheless, the JCI is projected to rebound and will close at around the 5,000 level by the end of 2020. Panin Sekuritas research head Nico Laurens projects that the JCI will rise to the 5,364 level by the end of the year despite pressure from the pandemic and rising US-China tensions.

Investors are advised to be cautious in managing their portfolios by taking a wait and see approach or a buying on weakness approach. Long term investors could use this opportunity to purchase defensive stocks in the telecommunication sector or to purchase stocks with high rebound potentials from the banking sector. Also, investors should diversify their portfolio with less-volatile instruments, such as bonds.

Global trade activities have started to rebound in the third quarter. According to the United Nations Conference on Trade and Development (UNCTAD), the number of port calls around the world increased to 9,265 in early August after facing a slump since March. China has seen the highest growth with 4.1 percent year on year and a rise of 44 percent in port calls for August compared to April.

To maintain surpluses in our trade balance, Indonesia needs to aggressively look for new potential trade partners. Besides, Indonesia should also ensure the success of ongoing trade deal negotiations, such as the Indonesia-EU Comprehensive Economic Partnership Agreement (CEPA), and Indonesia-Turkey CEPA, which are estimated to be completed by the end of 2020.

Bank Indonesia (BI) deputy governor Dody Budi Waluyo explained that the Indonesian economy was more resilient now than compared to the monetary crisis in 1997-1998 and the global financial crisis in 2008-2009. Dody was optimistic that Indonesia would recover soon as long as Indonesia could maintain the fundamentals by boosting consumption and continuing with debt restructuring.

Nevertheless, Dody also reminded that uncertainties remained high and that the recovery was not distributed evenly across all sectors. As of Sept. 15, BI had injected Rp 662.1 trillion (US$44.63 billion) in liquidity into the banking system through quantitative easing, including monetary expansion and relaxation of statutory reserve requirements.

Meanwhile, Indonesian Employers Association (Apindo) chairman Hariyadi Sukamdani said the sectors most impacted by the COVID-19 pandemic were land transportation, tourism and micro, small and medium enterprises. He predicted that the COVID-19 would affect 30 percent of workers in the formal sector, hence he advised the government and the House of Representatives to speed up the passage of the job creation omnibus bill into law to attract more investment.

Financial technology (fintech) firms are cooperating with banks and other companies to provide public services, including by helping disburse the government’s COVID-19 relief package, says an association leader.

“That is one way we could see fintech playing a very big role, especially when everything is going digital because of the pandemic,” Adrian said at Jakpost Fintech Fest, a virtual discussion held by The Jakarta Post.

The government has set aside Rp 695 trillion (US$46.9 billion) for COVID-19 relief efforts, although only 36 percent of the budget has been spent. Investree is also taking part in the government’s e-procurement program, which seeks products from small and medium enterprises (SME) for state procurement. The government expects to spend Rp 700 trillion in the procurement.

E-wallet company Ovo, which has seen 150 million downloads of its mobile app, is working with state-owned electricity company PLN to disburse the government’s electricity subsidy to more than 100,000 families, said Natasha Ardiani, the company’s vice president of lending services.

Pelindo III, for example, will build two ports in Nusa Tenggara: one in Gili Mas to connect with the Mandalika special tourism zone in West Nusa Tenggara and another cargo port in Labuan Bajo in East Nusa Tenggara.

The Transportation Ministry’s sea transportation director general, Agus Purnomo, said that currently Indonesia had 636 ports spread all across the country, but that only three ports could accommodate large vessels for export-import activities: Tanjung Priok in Jakarta, Tanjung Perak in Surabaya and Belawan.