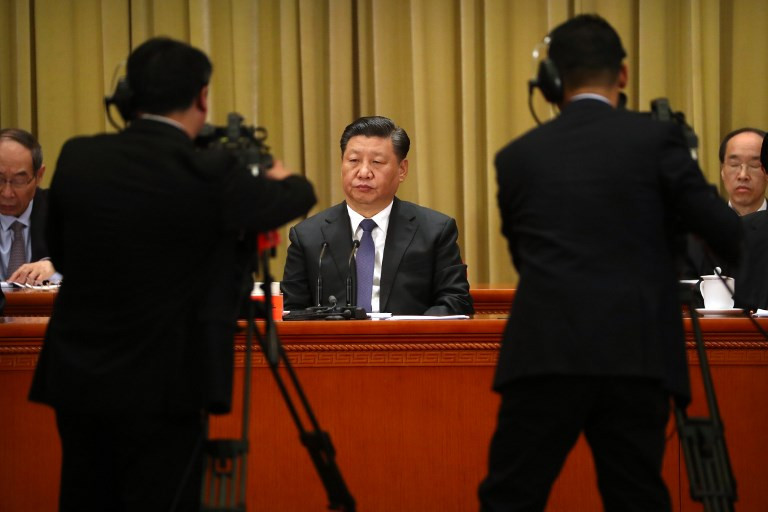 China's President Xi Jinping listens to a speech during an event to commemorate the 40th anniversary of the Message to Compatriots in Taiwan at the Great Hall of the People in Beijing on January 2, 2019. Taiwan's unification with the mainland is (POOL/AFP/Mark Schiefelbein)

Indonesians perceive China as the dominant power in Asia, but they also view this development in an increasingly negative light, according to the latest study by the Indonesian Survey Institute (LSI).

China’s dominance increased sharply from the same survey in 2016, when the US and China were both considered equally influential in Asia — each by 24 percent of Indonesian respondents. However, China’s growing dominance also came with negative public sentiment, mostly related to political and economic factors, with China being perceived as an economic threat, according to the survey.

The negative perception toward China in 2019 was largely influenced by political partisanship in the presidential election that year, when supporters of presidential candidate Prabowo Subianto accused incumbent President Joko “Jokowi” Widodo of being “China’s lackey", according to the survey. The idea was believed by 13 percent of respondents in April 2019.

The Corruption Eradication Commission (KPK) supervisory council has agreed to issue search permits for KPK investigators within 24 hours after the permit is requested. The agreement was reached during a meeting at the KPK building on Tuesday.

“We have agreed on the procedure to issue search permits. We want to make sure that the procedure will not slow the KPK’s work,” said KPK supervisory council chairman Tumpak Hatorangan Panggabean after the meeting.

Once a permit is issued, the council will not interfere with the antigraft body’s work, including in developing and executing the search strategy, Tumpak said.

Lawmaker Guspardi Gaus of the National Mandate Party (PAN) said the KPU might lose the public’s trust due to the bribery case, therefore he asked the poll body to work harder to regain public confidence.

Election Organization Ethics Council (DKPP) chairman Muhammad told the House hearing the council would start examining the bribery case on Jan. 15. He said he would make sure Wahyu turned up for the ethics council hearing, which will decide whether Wahyu had breached the KPU code of ethics.

Indonesian Democratic Party of Struggle (PDI-P) politician Hamka Haq said the party’s decision to name Harun Masiku a replacement of the deceased House legislator-elect Nazarudin Kiemas had followed a mechanism in the party’s central executive board.

“We [the party executives] held a meeting and agreed upon Harun’s appointment considering his expertise in the field of international economics,” said Hamka. Harun was the only legislative candidate considered for the seat left vacant by Nazarudin, according to Hamka.

On a different occasion, General Elections Commission (KPU) chairman Arief Budiman said all KPU commissioners unanimously approved the appointment of Riezky Aprilia, who secured the second-highest number of votes in the April 17 election behind Nazarudin.

Attacks on journalists increase in 2019 with rise in doxing, cyberattacks: LBH Press
The Jakarta Post, p.5

Throughout 2019, the Legal Aid Institute for the Press (LBH Pers) recorded not only an increasing number of incidents of violence against journalists, but also observed new types of attacks such as cyberattacks and doxing. While 71 cases were recorded in 2018, LBH Pers identified 79 in 2019.

LBH Pers executive director Ade Wahyudin said on Monday that journalists were increasingly becoming the targets of online attacks for stories they had published. Some have even become victims of doxing, while many others have had their social media accounts hacked.

LBH Pers has provided legal assistance to some journalists, but others have seen their cases progress very slowly or stall.

The Attorney General’s Office (AGO) detained on Tuesday five people for allegedly being involved in alleged fraud and corruption at ailing state-owned insurer Asuransi Jiwasraya.

The suspects have been charged with “unlawfully or intentionally enriching oneself or another person or corporation causing state losses” as stipulated in articles 2 and 3 of the 2001 Corruption Law.

The government is set to replace the mechanism for providing liquefied petroleum gas (LPG) subsidies to a direct mechanism so that only the poor can receive such subsidies.

Energy and Mineral Resources Ministry downstream oil and gas director Mohammad Hidayat said on Tuesday that the government would use a direct mechanism so that only poor households could get the LPG subsidy.

Mohammad said the new mechanism, the details of which remain unknown, will be in place by the second half of this year as part of the government’s program to gradually reduce the subsidy in the state budget.

Last year, the government spent about Rp 58 trillion (US$4.24 billion) to subsidize the 3-kilogram LPG canisters, which are allocated for poor households.

This year, the government only allocated Rp 50 trillion for the LPG subsidy.

The regulation, which will lower the maximum value of tax-free imported goods sold through online market places, will take affect beginning this month.

Finance Ministerial Regulation No.199/2019 sets the maximum value of non-taxable imported goods at US$3 per shipment, far lower than the current $75. The new regulation will take effect on Jan. 30.

With the revision, total taxes that have to be paid will be only 17.5 percent instead of the previous 27 percent.

“This is to create a level playing field for domestic products, which mostly come from small and medium industries, and imported products,” Customs and Excise Directorate General international and inter-institutional customs director Syarif Hidayat said in a written statement on Tuesday.

However, the new import tariffs will not be applied to bags, shoes or garment products, which will be subject to normal tariffs, as the government is trying to protect local producers, he added.

In a bid to improve ease of doing business in the country, the government is set to issue 12 sets of regulations from various ministries at the end of January.

The Investment Coordination Board (BKPM) investment climate development acting director Yuliot said on Tuesday that the government was preparing 12 sets of regulations that would make it easier for people to conduct business in the country.

The regulations will come from various ministries, including the Finance Ministry, Energy and Mineral Resources Ministry, Law and Human Rights Ministry and the Manpower Ministry.

Indonesia was ranked 73rd out of 190 countries in the World Bank’s 2020 Ease of Doing Business index, far below other ASEAN countries such as Singapore (2nd place), Malaysia (15th) and Thailand (27th).

Yuliot added that with the new regulations the government hoped the country’s ranking could be raised to 50th next year.

RI’s economy to slightly recover in 2020
The Jakarta Post, p.8

Indonesia’s economy is expected to perform slightly better in 2020 on the back of improved commodity prices and easing external pressures, economists have said.

In its latest Global Economic Prospect report, the World Bank forecast Indonesia would book 5.1 percent GDP growth in 2020 and 5.2 percent in 2021. The figures were 0.2 percent lower than in its June 2019 projection.

Global growth, meanwhile, was set to pick up by 2.5 percent this year, higher than the 2.4 percent projected for 2019, driven by higher growth in emerging markets and developing economies, amid recovery in global trade and investment.

Indonesia’s economy grew 5.02 percent in the third quarter last year, the latest data available, constituting the slowest growth in more than two years. Consumer spending, which accounts for more than half of GDP, stagnated while investment cooled, and exports slumped.

This year, the government expects to achieve 5.3 percent growth as stipulated in the 2020 state budget.