Jakarta collects Rp 1.1b in fines as end of PSBB transition looms 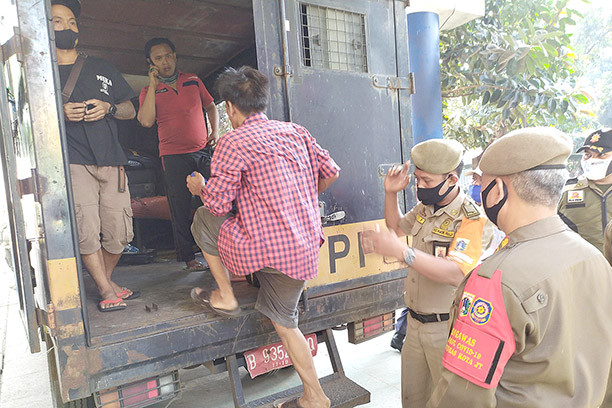 Round ‘em up: Officers from the Jakarta Public Order Agency and Jakarta COVID-19 task force detain local residents for not wearing masks at Kramat Jati Market in East Jakarta on Saturday. The officers also detained street vendors and people without ID cards for questioning and COVID-19 testing.(JP/P.J. Leo)

Jakarta collects Rp 1.1b in fines as end of PSBB transition looms
The Jakarta Post, p. 2

The Jakarta administration is amassing a significant amount of money from city residents who seem not to care about flouting COVID-19 health protocols, as the capital approaches the end of the extended transition from large-scale social restrictions (PSBB) on Thursday.

The number of violations of the protocols in the capital has shot up since the city started relaxing curbs and allowing businesses to reopen on June 5.

The Jakarta Public Order Agency (Satpol PP) said it had collected fines amounting to Rp 1.1 billion (US$78,571) from businesses and individuals that ignored health protocols during the transition up until July 24.

Of that figure, around 60 percent, some Rp 664 million, was collected from the 4,094 individuals caught without masks in public, while the remainder was sourced from businesses and arts and cultural performances that failed to follow the necessary protocols for operations.

Bobby claimed to have been in touch with several religious organizations, including Muhammadiyah and Al Washliyah. “Rather than approaching, we came to clarify commitments to collaborate with each other in improving the conditions of the region and the people in it,” he said.

In addition to garnering support, Bobby is looking to build a coalition of supporting parties, which include the Gerindra Party, the Golkar Party, the NasDem Party, the National Mandate Party (PAN) and the United Development Party (PPP).

The government is limiting the formation of new institutions and agencies so that the recent downsizing, where President Joko “Jokowi” Widodo disbanded 18 government agencies to simplify bureaucracy and alleviate budget restraints, will not have been done in vain. Moreover, even if new institutions have to be born, their main tasks and functions must only be to accelerate the achievement of state targets.

Administrative and Bureaucratic Reform Minister Tjahjo Kumolo said on Tuesday that there were still too many institutions. Therefore, the ministry must reevaluate each of these institutions and see which ones must be merged so that the bureaucracy is maximized.

The COVID-19 task force has called on workplaces to implement WFH policies, following reports of increasing numbers of coronavirus clusters in offices.

An epidemiologist in the COVID-19 task force’s team of experts, Dewi Nur Aisyah, said workplaces should implement a full or partial WFH policy to prevent further infections among workers.

“If we look at the current conditions, all workplaces that are able to apply a WFH policy should start doing so,” Dewi said during a webinar on Wednesday, as quoted by kompas.com.

“Even if workers must come in for work, the capacity must be limited to only 50 percent, so it is easy to maintain distance,” she continued.

Another strategy workplaces could implement, Dewi said, was to divide workers into different work shifts to prevent crowding during office hours. The provision requiring workplaces to limit staff numbers to 50 percent of office capacity is already stipulated in Gubernatorial Regulation No. 51/2020 on the “transitional” period to the “new normal”.

The regulation also requires businesses to develop systems to regulate the distribution of working days, working hours and work shifts.

Oligarchy can harm democratic societies. For example, in the regional heads elections, those who hold power and large capital are often sought out to sponsor candidates. As a result, candidates who are elected in the contestation tend to lean toward policies that benefit the elite and overlook human rights.

“The political process that is influenced by oligarchic practices will produce leaders who only work for the elite. As a result, there will be a disregard for human rights,” said National Commission on Human Rights (Komnas HAM) external deputy chairman Amiruddin on Wednesday, in a webinar titled Oligarchy in the 2020 elections.

The head of the 2020 regional elections monitoring team, Hairansyah, said that Komnas HAM had received many reports of human rights violations involving local administrations, such as agrarian conflicts, control of natural resources and the environment as well as the neglect of indigenous peoples’ rights.

The government has officially announced a working capital loan guarantee totaling Rp 100 trillion (US$6.6 billion) until next year for corporations in labor-intensive industries that do not qualify as state-owned enterprises and small and medium enterprises to accelerate industrial recovery.

The government has appointed Indonesia Eximbank as the guarantor and PT Penjaminan Infrastruktur Indonesia (PII) to provide loss limit support for the working capital loans that will be provided by 15 commercial banks, amounting to between Rp 10 billion to Rp 1 trillion.

Although they appreciate the initiative, industry actors are still worried about banks’ commitment to distribute the loans as the manufacturing sector has a high bad debt ratio. Similarly, banks have echoed the same concern and will likely take precautions in distributing the loans despite the government’s guarantee.

Coordinating Economic Minister Airlangga Hartarto said of the program, “If corporations bounce back quickly, then the national economy will recover soon.”

The sharp increase in confirmed COVID-19 cases has made businesses worried about the prospect that large-scale social restrictions (PSBB) will be reimposed, particularly in Jakarta.

The relaxation of measures has resulted in new transmission clusters, including 90 clusters found in office areas. The COVID-19 task force also designated Jakarta as a red zone on July 26. Only two days later, Jakarta broke a new record of 577 new confirmed positive cases.

Although the transition phase for Jakarta’s PSBB is due to end today, the average positivity rate remains above 5 percent. Jakarta Deputy Governor Ahmad Riza Patria said the Jakarta administration had been taking measures in response to the increasing number of COVID-19 cases.

Three possible scenarios have also been considered for the future of PSBB, including reimposing PSBB and extending the transition phase. “If the cases continue to rise, there is a possibility to return to full-scale PSBB,” he added.

Meanwhile, businesses are afraid that the reimposition of PSBB measures could hurt the economy. Economic activities are necessary to prevent further recession and having to lay off more workers. “What’s needed is consistency in implementing health protocols,” said Indonesian Employers Association vice head Shita Widjaja Kamdani.

According to National Economic Recovery Task Force head Budi Gunadi Sadikin, managing public health is currently the priority for the government. Should it succeed, business activities will return and the economy will grow again.

The recent surge in gold prices could be a boon for Indonesia, despite the economic risks that loom behind the spike in demand for the safe-haven commodity.

The price of bullion touched its highest level ever on Tuesday, with investors rushing to park their money in safe-haven assets, as concerns grow about a second wave of the coronavirus pandemic and its impact on the global economy.

Gold futures have soared nearly 30 percent this year to US$1,941 per ounce, beating the previous record of $1,921 in 2011, with the bullish rally kicking off earlier this month, Reuters data show. Several analysts project the price of bullion to top $2,100 this year because of the continued uncertainty around the pandemic.

The price of gold sold by Antam jumped 2.5 percent to Rp 1.02 million ($70.1) per gram on Tuesday from a day earlier. The stocks of the company, traded on the Indonesia Stock Exchange (IDX) under the code ANTM, have also risen more than 19 percent in the past month on the back of the gold price rally. However, the company’s stock price slipped 0.69 percent to Rp 720 apiece on Tuesday session, with the price dropping 14.3 percent so far this year.

The stocks of mining company PT Merdeka Copper Gold, traded under the code MDKA, have also jumped 32.6 percent in the past month.

PT MRT Jakarta started the construction of the Rp 22.5 trillion (US$1.5 billion) Bundaran HI-Kota segment of the Jakarta MRT line on July 24 with the project expected to be finished in 2025 and could be ready to launch in April 2025.

The construction of the HI-Kota segment would take longer than the first segment because the entire segment will be built underground and the land is not stable, and even subsiding. “So, this second phase of development is more difficult than the first phase,” Wiliam said.

27 new industrial estates to be built by 2024
Koran Tempo, Economy and Business page

The government has set a target to build 27 new industrial estates by 2024 to facilitate foreign investment with 29 foreign investors planning to invest in Indonesia in the first half of this year.

Meanwhile, Industrial Estate Association chairman Sanny Hidayat revealed that in the first half of this year, Indonesia’s industrial estates received investment commitments from 50 investors, 29 of whom are foreign investors. They include 10 investors from South Korea, seven from Japan and three from China. The others come from different countries.