Jakarta gears up for inauguration 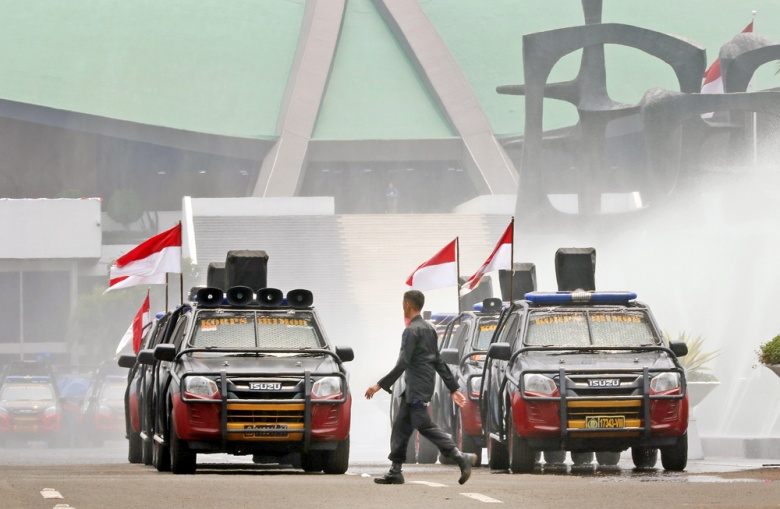 High alert: Police vehicles equipped with tear gas guns are seen at the House of Representatives/People’s Consultative Assembly compound in Senayan, Central Jakarta, on Thursday, ahead of the inauguration of President Joko “Jokowi” Widodo and vice president-elect Ma’ruf Amin on Sunday. Some 30,000 security personnel will be deployed on the inauguration day.(JP/Dhoni Setiawan)

GENERAL NEWS AND HEADLINES
Jakarta gears up for inauguration
The Jakarta Post, Headline

President Joko “Jokowi” Widodo will officially begin his second term this Sunday and the inauguration ceremony promises to be a global affair. Several world leaders are expected to attend, including from ASEAN countries, Australia, China and the United States.

Presidential Secretariat head Heru Budi Hartono told journalists at the State Palace on Thursday that preparations were underway to welcome dignitaries who had confirmed their attendance.

According to Heru, the foreign dignitaries are to be ferried to and from the location of the ceremony using 18 Mercedes-Benz automobiles as requested by the Foreign Ministry.

“For security purposes, they will be backed by the President’s security detail [Paspampres] from [Soekarno-Hatta or Halim Perdanakusuma] airports,” he said.

Presidential Chief of Staff Moeldoko said there would be a larger deployment of Paspampres than usual. Security will be tight for the VVIP guests and the former Army general has suggested that the public respect the proceedings by not staging any demonstrations on the day.

Hundreds of students from 18 universities across Jakarta, Bogor, Depok, Tangerang and Bekasi staged a rally near the Presidential Palace in Central Jakarta on Thursday. The students, who were grouped under the National Association of University Student Executive Bodies (BEM-SI), urged President Joko “Jokowi” Widodo to issue a government regulation in lieu of law (Perppu) to annul the controversial revisions of the Corruption Eradication Commission (KPK) Law.

Students have held a series of rallies since September to prevent the House of Representatives from passing the contentious revisions of the KPK Law. Demonstrations in Jakarta and several other cities have continued until now. Yet, it is speculated that the protests have been undermined through several measures, including a police ban, approaches to university leaders and bribes.

Jakarta State University Student Executive Body (BEM) leader Abdul Basit said students had been offered money if they refrained from rallying ahead of the presidential inauguration on Oct. 20.

“We refused [the offer]. We believe that holding a rally is more urgent to make the President issue a Perppu,” said Abdul. He declined to identify the people who offered the money.

The performance of the government of President Joko “Jokowi” Widodo and Vice President Jusuf Kalla in political and security affairs has received a considerable level of public appreciation. Regardless, the public also demands that Jokowi further protect civil liberties and human rights in his second term.

A survey conducted by Kompas between Sept. 19 and Oct. 4 found that as many as 64.3 percent of respondents were satisfied with the performance of Jokowi and Kalla’s government in political and security affairs. A previous survey in May 2019 showed the satisfaction level was only at 62.1 percent.

Institute for Policy Research and Advocacy (ELSAM) deputy director Wahyudi Djafar said the increase in public satisfaction might have been caused by the diminished political tension in the country following the 2019 general elections. The relatively peaceful elections might have also created a sense of political stability and fulfilled people’s political rights.

Regardless, the public still wants a guarantee for civil liberties, which will play a decisive part in strengthening the government’s social capital in the 2019 to 2024 term. Threats to freedom of expression and opinion that have recently emerged will potentially erode the public trust in the government and democracy.

While the controversial revisions of the Corruption Eradication Commission (KPK) Law became effective on Thursday, the antigraft body is operating as usual. KPK spokesperson Febri Diansyah said the commission would continue its law enforcement activities even though they might be not as stringent as they had been.

According to Febri, there are at least 26 points in the revisions that could potentially weaken the KPK, including limitation of the KPK’s wiretapping activities and revocation of the body’s authority to issue travel bans.

Febri said the KPK would establish a team to facilitate its adjustments to the new KPK Law. “It’s to minimize harm resulting from the revisions because a number of the KPK’s authorities have been diminished,” said Febri.

With two years in office behind him, Jakarta Governor Anies Baswedan claims that Jakarta is a better city under his administration, but city councilors and experts say there are many things that Anies has to achieve in order to prove his leadership qualities.

Anies claimed that he had run 14 flagship programs this year as part of efforts to realize Wajah Baru Jakarta (the New Face of Jakarta), a catchphrase he introduced as an umbrella program to differentiate his policies from those of his predecessor. The programs were among the 23 pledges he made during his campaign, which included welfare card distribution, affordable staple food and efforts to protect women and children.

Regardless, experts have questioned the basic pledges that Anies made, including the one related to clean water availability in the city. Anies said in February that his administration would take over tap water management from the private partners of city-owned tap water company PD PAM Jaya, but this remunicipalization has since gone off the radar.

Suryono Herlambang, an urban expert from Jakarta-based Tarumanegara University, said the highlight of Anies’ achievements seemed to be the consequences of his political approach: to encourage public participation and collaboration.

"An approach that requires a longer process and time before being able to be implemented in the field," he told The Jakarta Post.
BUSINESS AND ECONOMICS NEWS AND HEADLINES
Govt raises 2020 UMP reference by 8.51 percent
Kontan, headline; Bisnis Indonesia, p.3

The Manpower Ministry has raised the provincial minimum wage (UMP) reference by 8.51 percent for 2020, a slight increase from 8.03 percent this year.

The calculation of the minimum wage was based on Government Regulation (PP) No.78/2015, which is opposed by labor unions. Under the regulation, the increase is based on national inflation and economic growth rates, which was recorded at 3.39 percent and 5.12 percent, respectively, as of September.

In its circulation letter issued on Oct. 15, the ministry allows regional administrations to set higher minimum wages in their respective regions, but administrations that wish to do so have to get a recommendation first from the provincial Wage Council.

Confederation of Indonesian Workers Unions (KSPI) spokesperson Kahar S. Cahyono urged governors to start discussing the 2020 UMP, which had to be set on Nov. 1, with the Wage Council. Kahar also urged the governors not to use Government Regulation No. 78/2015 as their reference in calculating the wage adjustment.

Merpati Nusantara Airlines will focus its operations on cargo services after a consortium of 10 state-owned companies led by Garuda Indonesia agreed to revive the state-owned airline, which was shuttered in 2014 because of financial problems.

Garuda Indonesia spokesperson M. Ikhsan Rosan said that Merpati would be operated to tap growing opportunities in the cargo business in the eastern part of Indonesia.

Under the cooperation scheme, Merpati will initially operate airplanes owned by Garuda Group, while other SOEs included in consortium will use its services.

For an initial step, Merpati would use three Boeing 737 airplanes to carry cargo, one from Garuda and the other two from Citilink Indonesia. The three jets will be converted into cargo aircraft.

Merpati’s income from the operation will partly be used to pay for the airplanes borrowed from Garuda Group. If the revenue stream is stable, Merpati can use its own airplanes, which have to be repaired and recertified first.

Founded in 1962, Merpati ceased operations in 2014 after the state-owned airline was strangled by mounting debts to several parties, including several SOEs.

In 2018, the commercial court accepted the airline's debt postponement petition (PKPU), which allowed it to reschedule the payment of its debts worth Rp 10.9 trillion (US$773.17 million).

Indonesia is all set to make halal labeling mandatory for consumer products and services from this week, but the high cost of securing the license and absence of clear guidelines mean millions of local producers are still without certificates.

The compulsory labeling will first apply to food and beverage products and services from Oct. 17 before being gradually expanded to include drugs, cosmetics and other consumer goods, according to the nation’s Halal Certification Agency (BPJPH). But a large number of small and medium companies are struggling to meet the rules without help from detailed technical guidelines, the Indonesian Food and Beverage Association (GAPPMI) said.

For the smaller companies, the cost of securing the license can be a burden and the BPJPH has asked the Finance Ministry to subsidize micro and small businesses. They should be paying no more than Rp 1.5 million to secure the halal certification, compared with up to Rp 7 million for large firms, Sukoso, head of the agency, said.

The government has yet to detail how it plans to subsidize small and medium enterprises and how it will treat products without the halal label. That is posing a challenge even for producers who have met all the criteria for halal labeling but haven’t been able to secure certification, said GAPPMI chairman Adhi S. Lukman.

The Trade Ministry intends to revise 18 ministerial regulations, 11 of which are on exports and the rest on imports, to bolster exports and investment.

Trade Minister Enggartiasto Lukita said on Thursday that the 18 regulations are mostly related to export and import activities. He further said that the revisions are needed so that companies in the country can more easily export their products overseas.

Enggar did not explain which regulations would be released shortly but stressed that the next administration would carry over the task to revise the regulations.

SMI president director Edwin Syahruzad said most local administrations still relied on funds transfers from the central government and locally generated funds (PAD) to finance their development projects because of a lack of awareness of other funding options.

As of September this year, he said on Oct. 10, SMI’s outstanding loans to regional administrations totaled Rp 2.73 trillion (US$192.9 million), up 87.42 percent year-on-year (yoy) compared to the same period last year. Despite exponential growth, the figure accounted for only 4.67 percent of the company’s overall outstanding loans, which totaled Rp 58.48 trillion as of September 2019.

Edwin said only a few local governments had taken advantage of other financing opportunities provided by SMI and that most used the funds to build roads and hospitals. The regional administrations that have taken out loans from SMI include Manado in North Sulawesi and North Penajem Paser regency in East Kalimantan, which will host part of Indonesia’s new capital.