Jakarta reinstates PSBB, but less strict than before 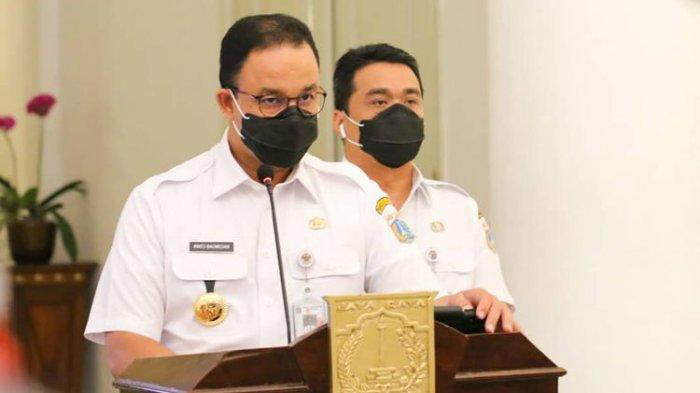 The Jakarta administration has decided to reimpose large-scale social restrictions (PSBB) starting on Monday, but the measures are more relaxed than when they were first implemented in April, leading experts to doubt the policy will bring down cases or deaths in the capital.

Jakarta Governor Anies Baswedan said at a press conference on Sunday that the measures would last for two weeks and could be extended.

Workplaces in 11 essential sectors — including health, food, energy, communications, finance, logistics and daily needs retail — will be allowed to remain open at 50 percent of capacity, while private companies outside these sectors as well as government offices must implement work from home policies and allow no more than 25 percent of their employees to work in the office at the same time.

Some of these restrictions are more relaxed than the first time the city imposed the PSBB in April, when all places of worship had to be closed, malls and markets were allowed to open only for essential daily needs and nonessential companies had to get an Industrial Ministry permit to operate.

Masdalina Pane of the Indonesian Epidemiologists Association (PAEI) expressed doubt that the measures would reduce COVID-19 transmission, saying that now, with new cases reaching the thousands, all people in the affected areas should be required to stay home.

The government announced that the Indonesian Military (TNI) and the National Police would be deployed to help enforce large-scale social restrictions (PSBB) in the capital. COVID-19 handling and national economic recovery committee chairman Erick Thohir said on Sunday that the military and police forces would conduct an operation so that people would adhere to the health protocols.

Erick further said that the military and police personnel would not only be deployed to public places but also in office buildings to help provincial level authorities enforce COVID-19 protocols. Workplaces in nonessential sectors must allow no more than 25 percent of their employees to work in the office at the same time.

Deputy National Police chief Comr. Gen. Gatot Eddy Pramono said the police would help enforce sanctions applied in each province. In Jakarta, for example, it would enforce sanctions stipulated in Gubernatorial Regulation No. 79/2020, such as fines and social work.

Hospitals in a number of cities neighboring Jakarta are starting to get overcrowded. In Tangerang, for example, 90 percent of 323 beds in COVID-19 referral hospitals are occupied, said Tangerang Health Agency head Desiriana Dinardiyanti. “Meanwhile, intensive care unit beds are all occupied,” Desiriana added.

Desiriana added that the Tangerang Health Agency had been coordinating with several hospitals in the regency to increase their bed capacity. She said the agency was also planning to open isolation facilities to house asymptomatic COVID-19 patients.

As the number of confirmed cases and fatalities from COVID-19 continues to rise, the government has prepared an apartment tower from the former Kemayoran athletes village — now an emergency hospital for infected patients in Central Jakarta — to house asymptomatic coronavirus patients for isolation, a top official said on Saturday.

Doni also said that the government was preparing two-star and three-star hotels to isolate asymptomatic COVID-19 patients. Moreover, he called on the COVID-19 referral hospitals to immediately release patients whose conditions had improved to free up isolation beds for other patients.

The West Java administration has offered Jakarta health authorities to transfer COVID-19 patients to hospitals in the province once the capital’s healthcare system is overwhelmed due to a spike in confirmed cases. West Java Governor Ridwan Kamil said he had conveyed his offer to his Jakarta counterpart, Anies Baswedan, during a recent virtual meeting. The hospital occupancy rate in West Java, currently the province with the fourth-largest coronavirus case number nationwide, stands at around 35 percent.

The government is under pressure to put the 2020 simultaneous regional elections on hold as confirmed COVID-19 cases in the country continue to surge.

The National Commission on Human Rights (Komnas HAM) and experts have said the government’s insistence on holding the elections on schedule will put election organizers, voters and candidates at risk of contracting the deadly disease.

As of Sunday, or three months ahead of voting day, the number of COVID-19 cases in the country had reached 218,382. On Thursday, daily new cases hit a record high with 3,861.

Komnas HAM commissioner Hairansyah said the government would violate the right to life, the right to health and the right to safety – all of which are guaranteed under the Constitution – if it decided to press ahead the elections on schedule.

These concerns were amplified when the Elections Supervisory Agency (Bawaslu) found that 243 prospective candidates had ignored health protocols by bringing large entourages to register their candidacies at the local offices of the General Elections Commission (KPU) from Sept. 4 to Sept. 6.

Despite wide criticism, Jakarta is going to enact its second period of large-scale social restrictions (PSBB) Monday. However, the rules will not be as strict as the first PSBB period.

Some businesses that were initially worried about the PSBB even appreciate this move as it shows a concrete step in managing the pandemic while maintaining business sustainability. National COVID-19 task force spokesperson Wiku Adisasmito supports the Jakarta administration’s policy and hopes that this will bring down the infection rate and save healthcare workers. Jakarta’s neighboring regions will also adjust to cooperate with this policy.

Nevertheless, the reimplementation of PSBB will still put some pressure on the economy, making the recession in the third quarter unavoidable. Economic recovery is predicted to start in the fourth quarter along with a fall in infection rates and increase in household spending.

Businesses to slow down operations during second PSBB
Kontan, headline

The reimposed large-scale social restriction (PSBB) is dilemmatic for businesses. Without it, the pandemic would be prolonged and slow their businesses. On the other hand, PSBB will also have an impact on their business performance.

Therefore, along with the PSBB implementation, businesses can only hope that the government is also truly committed to mitigating the effects of the COVID-19 pandemic. The commitment is essential to maintain people’s purchasing power and ensure economic activities, especially as Jakarta contributes to 70 percent of Indonesia’s economy.

As a response to the PSBB, hotel industries might choose to close due to the low occupancy rate to save on operational costs, while food and beverage industries are concerned about the possibility of low demand since dine-in will be restricted again.

“Public’s purchasing power is dependent on their income, which is affected by PSBB. This is our concern,” said Indonesian Food and Beverage Association (Gapmmi) chairman Adhi S. Lukman.

Reducing production capacity might also be the option if retail stores are forced to close. For the ceramic industry, this might lead to more layoffs, said Indonesian Ceramic Industry Association (Asaki) chairman Edy Suyanto.

Analysts are holding on to their estimate for the Jakarta Composite Index to achieve 5,300 to 5,550 by the end of 2020. They remain optimistic because Jakarta is implementing large-scale social restrictions (PSBB) that are moderate and will only be imposed from Sept. 14 to Sept. 27.

Jakarta Governor Anies Baswedan issued Gubernatorial Decree No. 88/2020 to reintroduce PSBB for two weeks, but with different rules from the initial PSBB. He said the PSBB implementation would be more moderate this time because the government would allow malls and 11 economic sectors to remain in operation. However, if any positive cases are found, the business site must be closed for three days.

Senior economist Faisal Basri said the government should focus on mitigating the spread of COVID-19 because economic growth would not improve if the death toll as well as positive and active cases continued to increase. He also recommends the government prepare adequate cash aid for poor people, not only those whose incomes were under Rp 5 million (US$336.16) but also farmers and fishers.

BNI Sekuritas technical analysis research department head Andri Zakarias Siregar predicts the JCI to be around 5,550 by the end of the year. He recommends the commodity sector because gold and metals such as nickel, copper and tin technically still have room for increase. In addition, metal mining and crude palm oil (CPO) because they were not affected much by the previous PSBB.

Furthermore, on the banking side, state-owned Bank Mandiri vice president director Hery Gunardi predicted the PSBB implementation would not significantly affect it since it is only applied to Jakarta. Private lender Bank Central Asia (BCA) president director Jahja Setiaatmadja said banks as well as micro, small and medium enterprises (MSME) had learned from the previous implementation of PSBB and were prepared.

The Jakarta administration’s plan to reintroduce the large-scale social restrictions (PSBB) to prevent the healthcare system from collapsing is likely to hit small businesses hard. The provincial economy already contracted 8.22 percent year-on-year from April to June.

Jakarta residents’ mobility was down 23 percent at retail and recreation locations, 16 percent at workplaces and 38 percent at transit stations on Sept. 6, compared to the start of the year, according to data from Google.

Shinta Kamdani, the deputy chairwoman of the Indonesian Employers Association (Apindo), projected the retail, public transportation and service sectors to feel an “immediate impact”, while other sectors might see less severe declines.

According to Indonesian MSME Association (Akumindo) chairman Ikhsan Ingratubun, of around 600,000 MSMEs in Jakarta, most of them sell food and beverages and they are expected to get hit the hardest as a result of the PSBB’s reintroduction.

To lighten the impact of the pandemic, the government reported on Sept. 2 that it had spent 42.14 percent of its Rp 123.46 trillion (US$8.31 billion) budget on a micro, small and medium enterprise (MSME) stimulus. The stimulus comprises debt restructuring, a loan interest-rate subsidy and Rp 2.4 million in productive social assistance for non-bankable micro enterprises.

E-commerce players are anticipating a spike in online sales during the large-scale social restrictions (PSBB) reintroduction that starts today. Homegrown e-commerce platform Bukalapak CEO, Rachmat Kaimuddin, said the company has prepared the technological infrastructure and optimized features to support activities on the platform.

Learning from their experience from the first PSBB, Bukalapak vice president Kurnia Rosyada said the number of micro, small and medium enterprises (MSME) had increased significantly by around 20,000 sellers every week. Sales traffic was the highest during prime time, after regular office hours, which is after 7 p.m.

E-commerce platform Tokopedia is also experiencing the same thing. The company saw 2 million new sellers since the beginning of the year. In addition, Tokopedia vice president of corporate communications, Nuraini Razak, said there was a particular sales pattern during the pandemic, such as an increase in the sale of comfortable stay-at-home clothes in the fashion segment.