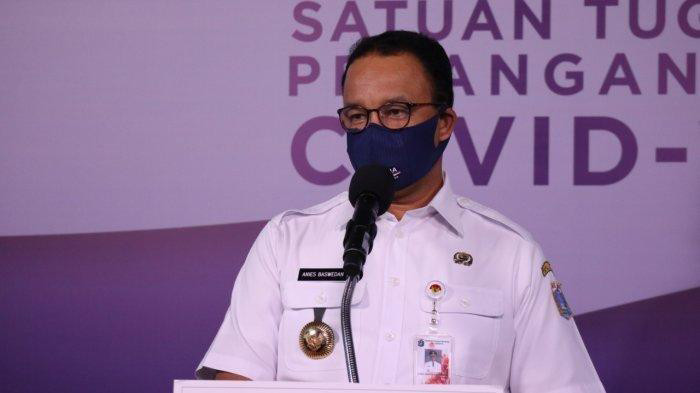 Jakarta Governor Anies Baswedan has once again relaxed large-scale social restrictions (PSBB) in the capital, starting another transitional phase on Monday despite the more than 1,000 new COVID-19 cases confirmed daily.

The transitional period will last at least until Oct. 25.

Anies said the decision was based on the number of daily new cases, the daily mortality rate and the trend of total active cases, which has flattened during the past few weeks, as well as an increase in hospital capacity for COVID-19 patients.

During the transitional period, workplaces in 11 essential industries — including health, food, energy, communications, finance, logistics and daily needs retail — will be allowed to operate at full capacity, while nonessential businesses may allow up to 50 percent of their employees to work at the office.

Restaurants will be allowed to serve dine-in customers at 50 percent of their maximum capacity, while houses of worship are also allowed to reopen.

Anies said that during the new transitional PSBB, businesses that were allowed to open must record each visitor in a physical or digital guest book to assist in contact tracing of positive cases.

“The situation is urgent given the massive public outcry,” Susi said on Sunday.

Susi also questioned the legitimacy of the law because of the minimal public participation during the deliberation process.

Susi said the President’s commitment was the main requirement of the Perppu issuance. The President, Susi added, should ensure that the House would pass the Perppu if he decided to issue one.

The Constitutional Court is expected to maintain its independence and neutrality in regard to the newly passed Job Creation Law. A number of parties have expressed concern over the court’s independence given that President Joko “Jokowi” Widodo had asked the court to support the issuance of the omnibus law earlier this year.

The court has assured observers that it will remain impartial and transparent in addressing requests for judicial review of the law.

Constitutional Court spokesperson Fajar Laksono said the court would allow anyone to file a request for a judicial review with the court, including labor groups. The court, Fajar added, would then process the requests according to regulations.

A number of parties have said they will file judicial review petitions, including the Confederation of Indonesian Trade Unions (KSPI), the National Welfare Movement (Gekanas) and the Indonesian Workers Union Federation (FSPI).

The Education and Culture Ministry’s Higher Education Directorate General issued a circular on Friday calling on university students not to take part in protests related to the controversial Job Creation Law and asking university leaders to promote the newly passed law.

The letter also asked university leaders to help promote the contents of the jobs law and encourage academic studies of the law.

It also instructed lecturers not to encourage their students to join or organize rallies and urged parents to ensure their children were carrying out at-home online studies.

The ministry's higher education director general, Nizam, said the letter reminded universities to ensure the health and safety of people on campus but said students who chose to take part in the protests would not be sanctioned.

The West Papua National Liberation Army (TPNPB) has confirmed it was behind an attack on members of the government’s joint fact-finding team (TGPF) in Mamba village in Intan Jaya regency, Papua, on Friday.

“For us, the TNI killed Pastor Yeremia [Zamambani]. We oppose a Jakarta-sanctioned investigation team that will only make us the scapegoat. That is why we opened fire,” Rimba told The Jakarta Post on Friday.

According to the TNI’s Joint Defense Area Command III (Kogabwilhan III), the shooting occurred on Friday afternoon as the fact-finding team was returning to Sugapa after conducting an investigation in Hitadipa district.

In response to the suspicion of and opposition to the TGPF team, Kogabwilhan III’s Suriastawa said the team would conduct an open investigation so that members of the general public could monitor its progress. He added that the TNI’s involvement in the fact-finding team was necessary because military personnel had witnessed the incidents.

Businesspeople have sought to defend the recently passed Job Creation Law days after 11 ministers did so, claiming that the regulation will uphold labor rights and will address high labor costs and productivity issues.

Indonesian Employer Association (Apindo) chair Hariyadi Sukamdani said on Friday that issues preventing businesses from employing more people formed the background of the drafting and deliberation of the omnibus law. He said the legislation aimed to redress a long-term decline in employment.

“In the span of 17 years since Law No. 13/2003 on labor was passed, a significant decline in employment has taken place,” he said in a virtual discussion held by the association. “This is in contrast to the growth of our workforce, which has increased by more than 2 million people every year.”

Aloysius Budi Santoso, the APINDO representative on the jobs law drafting team, said the law would uphold workers’ rights, such as maternity and menstrual leave. “If there is any article that is not included in the Job Creation Law, then it still refers to Law No. 13/2003 on labor,” said Aloysius, who also serves as chief of corporate human capital development at diversified conglomerate PT Astra International.

Article 33(6) states that mobile network operators (MNOs) can cooperate to use a frequency spectrum for implementing new technology and/or shift the use of radio frequencies to other MNOs after getting the central government’s approval. The article provides flexibility and a legal basis for MNOs in utilizing and shifting radio frequencies.

The previous Telecommunication Law No. 36/1999 did not provide the rule for frequency sharing and only mentioned in a supporting government regulation that radio station licenses could not be transferred without the minister’s approval.

MNOs welcome the new regulation on telecommunications as they believe that it could improve the telecommunication industry. The government has stated that it will discuss the supporting regulations of the Job Creation Law this week.

The government is granting several tax relaxations in the Job Creation Law and Law No. 2/2020, from reducing income tax from dividends to slashing income tax for issuers with a large amount of free float.

In the new law, the dividend will not be taxed if it is reinvested in Indonesia and meets certain criteria, such as a requirement that the reinvested dividends should at least 30 percent of profit after tax. Previously, the government provided a tax stimulus for corporations, reducing the income tax to 22 percent until next year, down from 25 percent. For issuers with 40 percent free float, there will be an additional 3 percent income tax discount.

CSA International president director Aria Santoso said the stimulus would help issuers’ financial performance as their budgets could be reallocated to cover other expenses, such as operational expenses.

The newly passed Job Creation Law brings certainty to business in Indonesia as it simplifies time-consuming and complex licensing processes. Regional governments have the authority to grant licenses, but the central government will take over if the process exceeds a certain time limit.

Airlangga added that the Job Creation Law would accelerate the growth of micro and small enterprises (MSE). The country has 64.19 million micro, small and medium enterprises (MSME), 75 percent of which are in the informal sector. It is hoped that many of them will become formal entities because the law has removed the minimum capital requirement to form a Perseroan Terbatas (PT) legal entity and the minimum membership to build cooperatives. Halal certification costs will be borne by the government.

Indonesian Chamber of Commerce and Industry (Kadin) deputy chair Shinta Kamdani said the Job Creation Law would bring confidence to businesses as it would resolve overlapping regulations between the regional and the central government. She said the law would integrate online single submission (OSS), which supports single gate licensing.

The Energy and Mineral Resources Ministry has said that non-tax revenue from the coal and mineral sector would not be affected by a royalty relaxation established by the Job Creation Law. The ministry’s communications bureau head, Agung Pribadi, said, “We will not get royalties from coal, but we will get more from other products.”

Article 39(2) of the Job Creation Law gives fiscal relaxations to businesses willing to downstream or process their commodities. The government’s commitment to provide the relaxation is supported by Article 128A(1) of the Coal and Mineral Law, which is followed by Article 128A(2) that says activities adding value to coal will be subject to no royalties.

However, Center of Reform on Economics (CORE) Indonesia researcher Yusuf Rendy Manilet said the lost non-state tax revenue from royalties was high, especially considering exports were likely to increase as the economies of destination countries improved. “Rather than losing potential revenue from royalty relaxations, it would have been better to keep going and find another way to boost downstreaming,” Yusuf added.