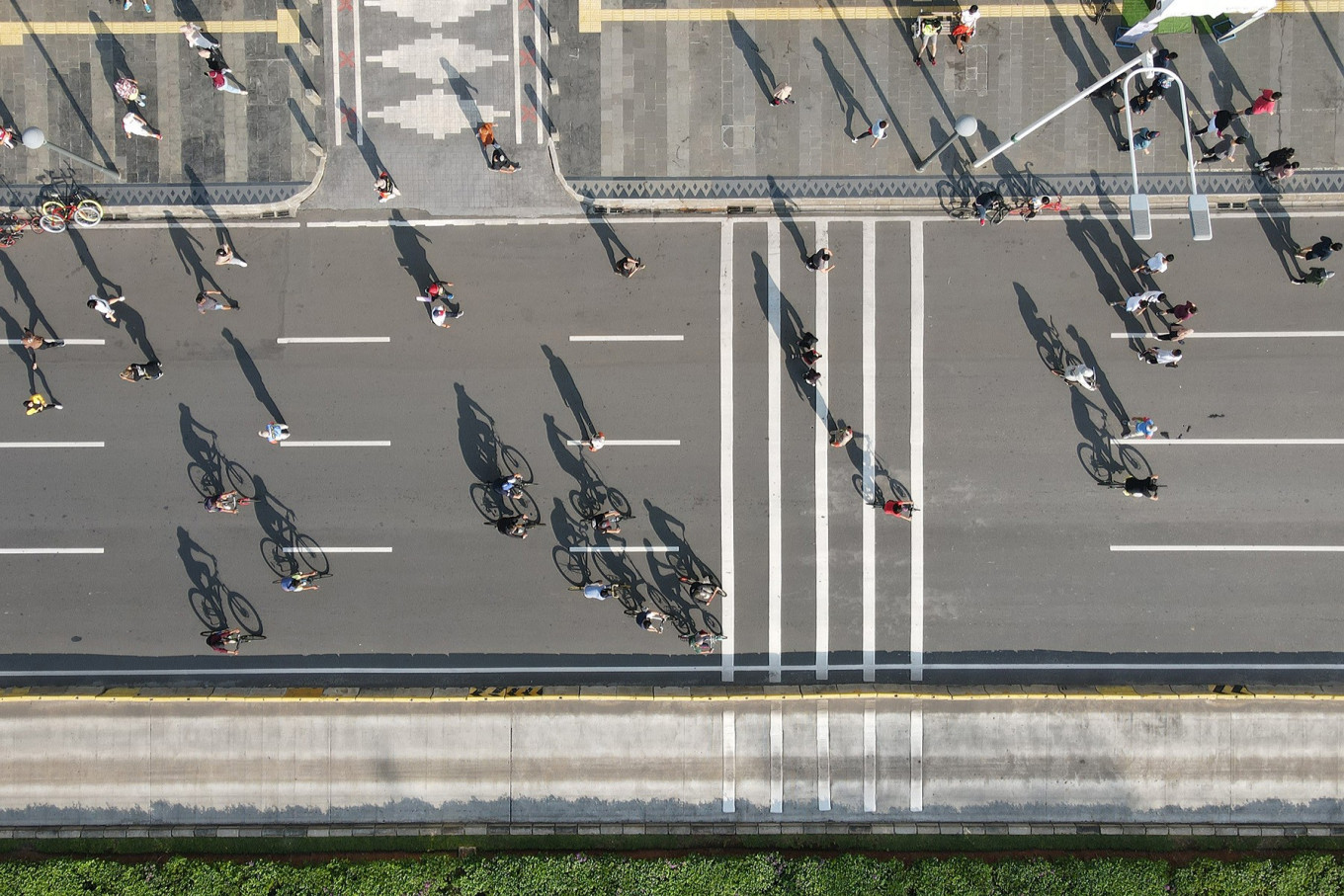 Lack of public discipline and a relatively high reproduction number (R0) have led to Jakarta Governor Anies Baswedan’s  decision to extend the transitional large-scale social restrictions (PSBB) phase in the capital until July 16.

“The decision was made after we reviewed the first stage of the transitional PSBB, which has been enforced in Jakarta since June 5,” said Anies during a virtual press conference on Wednesday.

Based on the evaluation, it was decided that there were three aspects of the capital’s health protocols that still had to be improved in practice, namely wearing face masks, regularly washing hands and keeping physical distance.

“Jakarta’s R0 is still 1.0, which means that one COVID-19 patient still can transmit the virus to another person. COVID-19 transmissions are successfully curbed when our R0 is below 1.0,” said Anies. The governor added, however, that in general the capital’s incidence rate (Ir) was under control.

The House of Representatives has crossed out dozens of bills from its 2020 National Legislation Program (Prolegnas), as supported by its commissions and party factions.

Supratman explained that the removal of numerous bills from the Prolegnas was largely due to the COVID-19 pandemic, which requires most of the House’s attention. Baleg is waiting for the government in case the latter also wants to remove other bills from the 2020 Prolegnas.

Bambang added that compared to his predecessors, Jokowi indulges the police the most. During former president Susilo Bambang Yudhoyono’s administration, for instance, police officers who held duel positions were mostly employed in other security-related institutions, such as the National Narcotics Agency (BNN) and the National Disaster Mitigation Agency (BNPB). “However, in Jokowi’s era, police officers have penetrated non-security sectors as well,” said Bambang.

To date, there are at least 30 active police generals and retired police officers posted in sectors other than security and law enforcement. Eighteen of them hold various positions in ministries, seven in nonministerial bodies, four in state-owned enterprises, two in independent associations and the remaining two posted as ambassadors.

A number of regions across the country have already imposed a similar ban -- South Kalimantan’s Banjarmasin, East Kalimantan’s Balikpapan, Bali’s Denpasar and Jakarta’s satellite city of Bogor in West Java.

“In general, business players support this policy, but indeed there are some who have asked for it to be postponed,” Jakarta Environment Agency head Andono Warih said in a statement on Tuesday. “This policy actually reduces their cost of providing single-use plastic bags.”

The policy, he said, was instrumental in reducing plastic waste disposed of at Bantar Gebang landfill in Bekasi, West Java -- the end point of Jakarta’s waste, which may only have one year left before reaching its maximum capacity.

The Jakarta administration has disseminated the policy to the managements of 85 shopping centers, more than 2,000 convenience stores and 158 traditional markets across the city, as well as the public, Andono said.

The policy -- Gubernatorial Regulation No. 142/2019 -- takes effect six months after its issuance on Dec. 31, 2019. The plan to issue such a regulation had been in the pipeline since 2018. It was put on hold as Anies wanted to include a provision on substitute materials to replace plastic bags.

The undetected return of Djoko Tjandra, a fugitive in the high-profile Bank Bali corruption case who has been sought by the Attorney General’s Office (AGO) since 2009, to Indonesia must be investigated. Poor coordination between government institutions is reportedly the main cause behind several notorious fugitives’ successful escapes.

Not only smooth coordination, speedy and well-orchestrated intelligence exchanges between institutions is also important in arresting high-profile fugitives, considering the extensive networks and flow of information that the fugitive often possess.

Djoko’s undetected return to Indonesia was affirmed by his attorney, Andi Putra Kusuma, during a press conference on Wednesday. According to Andi, Djoko filed a case review against his conviction with the South Jakarta District Court on June 8. The graft convict, however, failed to appear at his first hearing. Andi further added that he was unaware of his client’s whereabouts and how he was able to enter the country without detection.

Previously, Attorney General ST Burhanuddin said Djoko had returned to Indonesia about three months ago. Meanwhile, contradicting claims made by Burhanuddin, Law and Human Rights Minister Yasonna Laoly said there had been no indication of Djoko’s return, saying a thorough examination of immigration data had shown no record of his return.

Indonesia's purchasing managers' index (PMI) remains behind other Asian countries' even after it climbed to 39.1 in June, increasing from its lowest level of 28.6 in May per IHS Markit data. The figure, being below 50 in the index, shows that Indonesian manufacturing is still contracting.

Malaysia and Vietnam have recorded PMIs above 50, with 51 and 51.1, respectively. Both countries reopened their economies earlier than Indonesia, with Vietnam doing so after successfully decreasing its COVID-19 cases compared to Indonesia's later reopening, which is occurring amid continued increases in COVID-19 cases.

IHS Markit chief economist Bernard Aw said the survey data showed that although the PMI decline had slowed compared to April or May, the decrease in sales and production output was still significant, and that factories still faced pressure from high production costs.

Meanwhile, Indonesian Textile Association (API) chairman Jemmy Kartiwa revealed that the relaxation of large-scale social restrictions (PSBB) had driven up demand, but only among downstream businesses. Demand for textiles is still low because the public's purchasing power has not recovered.

Industry Minister Agus Kartasasmita said the government was optimistic that stimulus packages would help accelerate growth of the manufacturing industry. He argued that Indonesia has a lower PMI compared to other Asian countries because it reopened its economy in June, later than other countries.

Institute for Development of Economic and Finance (Indef) economist Bhima Yudhistira projected that the manufacturing sector would still be under pressure until the end of 2020, with a PMI of around 40 to 45, still below the normal expansion figure of 50.

The disbursement of interest subsidies for micro, small and medium enterprises (MSME) has been very low, at 0.06 percent of the total budget. One possible cause is the requirement for MSMEs to have a tax identification number (NPWP) to benefit from the interest subsidy.

The government has budgeted Rp 123.46 trillion (US$8.2 billion) in interest subsidies for MSME debtors with debts of below Rp 10 billion. And yet, in April and May, only Rp 74 billion had been disbursed, or only 0.06 percent of the total budget.

MSME Association chairman Muhammad Ikhsan Ingratubun blamed the low distribution on the government’s requirement for MSMEs to have an NPWP to benefit from the subsidy. He contended that many MSMEs did not have NPWPs and did not want to register to get an NPWP because of fear of future complications with their taxes. “They are afraid that they would be busy with their tax returns. They see it as a trap,” he said.

Finance Ministry tax office public relations officer Hestu Yoga Saksama explained that the requirement for MSMEs to have an NPWP was only intended to net more taxpayers, and not to check their tax records, and therefore the MSMEs should not be too concerned about the requirement.

The tax office has targeted to net 2 million new taxpayers through the program. According to the tax office, only 4 million MSMEs – out of 62 million – have an NPWP. And worse, only 2.3 million actively file tax returns.

The State-owned Banks Association (Himbara) has revised its loan growth target to between 1 and 5 percent this year from its initial target of between 6 and 13 percent as state banks have been leveraged by the government fund placement totaling Rp 30 trillion (US$2.1 billion).

This target is higher than the Financial Services Authority’s (OJK) banking loan growth target of 0 to 2 percent this year, compared to the initial target of 10 to 12 percent.

Himbara chairman and Bank BRI president director Sunarso said, “We are optimistic that we will see positive annual grow in 2020. Last year, banking loans grew 6 percent. This year, loans will also grow positively. BRI itself has projected that the loans will increase by 4 to 5 percent this year.”

He explained that optimism over loan growth this year was boosted by the government’s placement of funds in state banks, totaling Rp 30 trillion, from which banks would multiply to Rp 90 trillion in the form of loans to their customers until the end of this year.

The loan extensions by Himbara members will be segmented depending on the banks’ specialization. BRI, for example, will target micro, small, and medium enterprises (MSME), BTN will target the residential sector, BNI will target the export-import sector, while Mandiri will have broader target sectors, including transportation and tourism.

Relaxation of PSBB yet to drive up demand
Kompas, Economy and Business page

Many local governments, including Jakarta, have relaxed their large-scale social restrictions (PSBB) policies, and yet, the relaxation has not yet driven up demand for goods and services, as reflected in the June inflation.

According to Statistics Indonesia (BPS), the June inflation rate stood at 0.18 percent and was driven mainly by the volatility of food prices, rather than increasing demand. The basket of food price increased 0.77 percent, and this contributed 0.13 percent to the 0.18 percent June inflation rate – far higher than the 0.01 percent contribution of core inflation elements and 0.04 percent by government-controlled utilities.

BPS chairman Suhariyanto acknowledged that the relaxation of PSBB policies had not been reflected in the June inflation. “Maybe we will see its impacts in next month’s inflation rate,” he said.

Indonesian Institute of Sciences (LIPI) economic researcher Latif Adam said that the PSBB relaxation was meant to drive up consumer spending and demand, and yet, it was not reflected in the June inflation rate, meaning more needed to be done to drive up demand.

Experts warn against complacency on FDI
The Jakarta Post, p. 1

Business associations and experts have welcomed the government’s announcement on the relocation of foreign-owned production facilities to Indonesia, a positive sign for the slowing economy amid the pandemic. However, they also warned that regulatory reforms would be needed to improve the country’s ease of doing business.

President Joko “Jokowi” Widodo announced on Tuesday that seven foreign companies had confirmed plans to relocate production facilities to Indonesia, mostly from China. The move, which will include South Korean industrial conglomerate LG, is estimated to bring US$850 million to the country and potential employment for 30,000 workers, according to the Investment Coordinating Board (BKPM).

“This is a great development for Indonesia as we’ve been waiting for foreign investment to arrive in our country. We have to realize these [investment] commitments,” Shinta told The Jakarta Post in a phone interview on Tuesday.

Indonesia has booked a 9.2 percent year-on-year (yoy) decline in foreign direct investment (FDI) to Rp 98 trillion ($6.8 billion) in the first quarter of 2020.

The Indonesian Employers Association (Apindo) also welcomed the President’s announcement but warned against government complacency on the ease of doing business for companies that had already established their manufacturing facilities in the country, said chairman Hariyadi Sukamdani.

“The government shouldn’t only cater to investors invited to the country but also maintain those who are already operating [here],” he said in a separate interview on Tuesday.