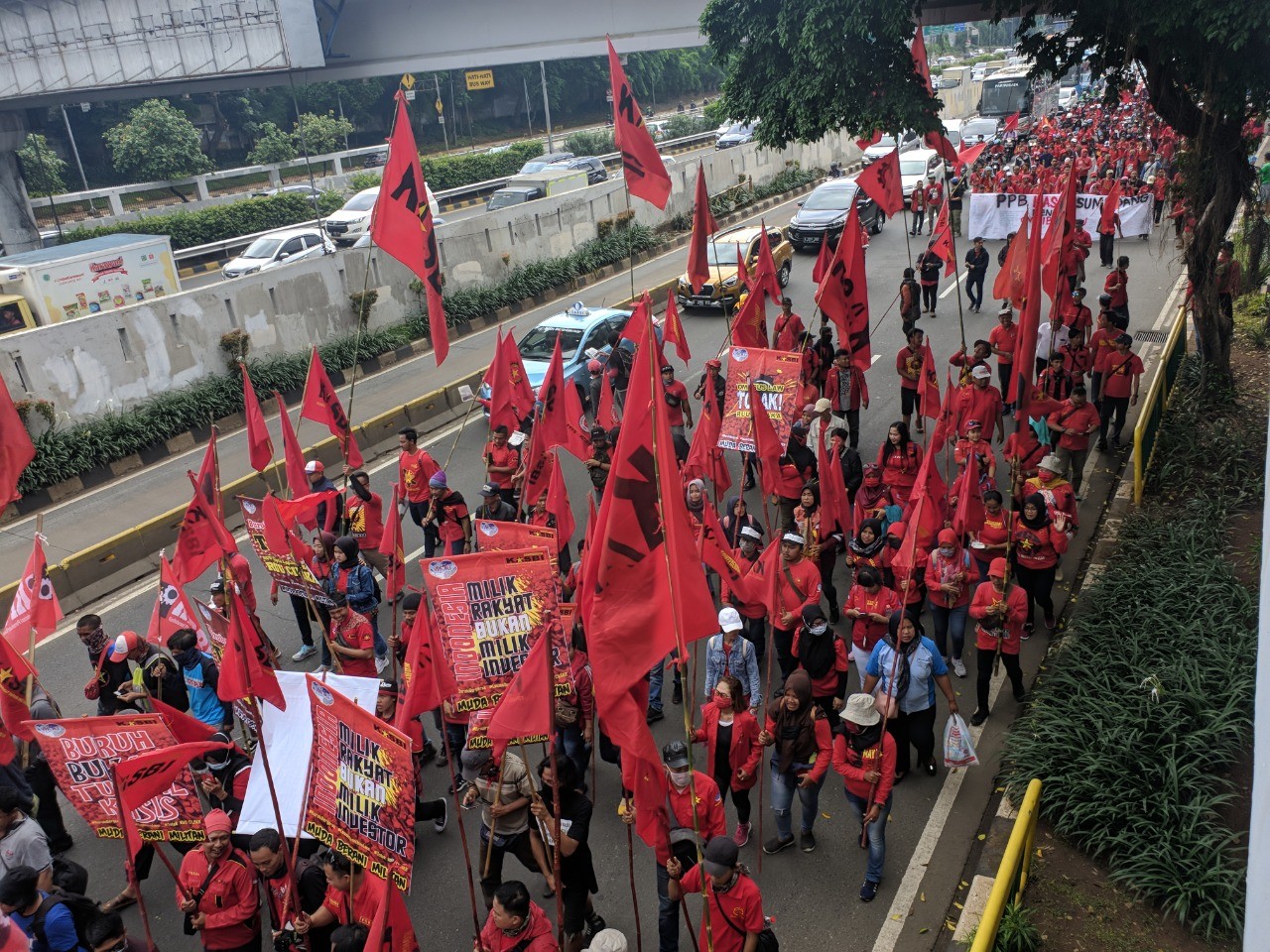 Labor unions march toward the House of Representatives Building in protest of the omnibus bill on job creation in Jakarta on Jan. 13, 2020.(JP/Moch. Fiqih Prawira)

An omnibus bill on job creation, a draft of which was submitted by the government to the House of Representatives for deliberation last week, has been subject to more criticism. Regional autonomy and constitutional law experts said the bill would potentially concentrate power in the central government. This was indicated by the amount of power the central government would acquire, including its authority to revoke local regulations, should the bill get passed.

Regional Autonomy Watch (KPPOD) executive director Robert Endi Jaweng said his party found a number of articles in the omnibus bill on job creation that would transfer power from local administrations to the central government, referring specifically to Articles 162 to 168.

“This is an example of power recentralization to the central government,” Robert told Tempo on Sunday.

Call for transparency is mounting as the House of Representatives (DPR) will soon begin its deliberations of a recently submitted draft of an omnibus bill on job creation. Many have urged the House to involve the public in the deliberation process to ensure an unbiased perspective is applied to some of the omnibus bill’s controversial articles.

Political expert Ujang Komarudin of the Al-Azhar Indonesia University said the mounting demand was the result of a lack of transparency during the government’s drafting of the omnibus bill.

“It [the drafting of the omnibus bill] has not been transparent since the beginning. There were no attempts to educate and inform the public [regarding the substance of the omnibus bill], and it turns out that the bill is not favorable toward labor groups,” Ujang said.

The National Nuclear Energy Agency (Batan) has asked residents of the Batan Indah housing complex in South Tangerang, Banten, to remain calm after finding high levels of radiation within the complex. The authorities said residents should not panic because they were handling the incident, adding that it was unlikely that the radiation had come from a nearby nuclear reactor.

"Residents can carry out activities as usual, as long as they do not enter the area that has been marked as contaminated. If managed properly, exposure to this radiation will not endanger the residents," agency spokesperson Heru Umbara said in a statement on Saturday.

Heru said Batan was currently in the process of cleaning up the exposed area and had collected 52 drums of soil and vegetation from the locations. The cleanup process, Heru said, started on Feb. 12 and would continue until early March.

He added that the team would soon conduct a radiation test known as “whole-body counting” on residents who lived in the exposed area to measure their bodies’ radioactivity levels.

The government has been carrying out the 2020 population census (SP2020) since Feb. 15, yet a majority of people, according to a survey by Litbang Kompas, are still unfamiliar with the SP2020. Meanwhile, those who are aware about the population census, which is being conducted online for the first time, are worried about the security of their personal data, which they will provide for the census by filling out an online form.

Statistics Indonesia (BPS) executive Nashrul Wajdi said BPS would ensure the security of people’s data as it was cooperating with the National Cyber and Encryption Agency (BSSN) as well as several other information and technology experts in securing its census webpage.

Nashrul said the agency had predicted that the online census would face public resistance. In this regard, it would also employ the traditional method of doo-to-door visits in conjunction with the online census.

The National Commission on Human Rights (Komnas HAM) has decided to categorize a 2014 tragedy in Paniai, Papua, in which five civilians — four of them students — were shot dead by alleged security personnel in a case of gross human rights violations. The decision was made during Komnas HAM’s plenary meeting last week.

“After thoroughly studying and discussing the Paniai case, we decided by acclamation that it is a severe human rights violation,” Komnas HAM chairman Ahmad Taufan Damanik said in a written statement on Sunday.

Komnas HAM said it had submitted its investigation documents to the Attorney’s General Office (AGO) on Feb. 11 and hoped the case would be processed as soon as possible.

The government has prepared a number of trade remedies to protect the domestic market from unfair competition from imported products following the coronavirus outbreak.

Since the beginning of this year, the government has conducted a number of investigations of possible antidumping and subsidy practices to support certain imported products.

“Through trade remedies, we are protecting domestic industries, so that their products can be competitive not only in the domestic market but also in the export market,” Bachrul said.

In addition to pursuing trade remedies to protect the domestic market, the government is also providing support for products that face similar trade remedy allegations from other countries.

The government managed to protect export value of US$1.8 billion from possible trade remedy measures from other countries in 2019, the highest since 2014.

Those are the views of multilateral agencies such as the International Monetary Fund (IMF) and the U.S. Federal Reserve Board and also from Chinese authorities.

For Indonesia, the impact of the coronavirus outbreak will be felt in the tourism sector as well as in exports and imports. However, the impacts on Indonesia will be a lot less than the impacts on Singapore, Vietnam, Thailand, Taiwan and Hong Kong.

The IMF described that the impacts of the coronavirus outbreak on China would be like the V curve, in which the Chinese economy would go down fast but would recover fast. But it added that it was too early to make a prediction on the impact on China’s economic growth. China has targeted to grow by 6 percent this year.

Meanwhile, US Fed Governor Jerome Power said that US economy was currently strong, with solid growth and employment creation, and could withstand the impacts of the coronavirus outbreak.

The job creation omnibus bill, already submitted by the government to the House of Representatives, will likely continue to be debated, as some consider it too pro businesses, laying out the red carpet for both domestic and foreign investors.

For example, the omnibus bill will remove Article 100 of the 2010 Horticulture Law that limits foreign investment in the horticulture industry to 30 percent.

The omnibus bill will also erase Article 30 of the 2004 Fisheries Law to allow foreign-flagged fishing boats to catch fish in Indonesian water, as long as a minimum of 70 percent of the crew is Indonesian.

Ahmad Redi from Tarumanegara University noted that the omnibus bill would attract investment into the mining sector, but that it lacked focus. In the existing mining regulations, the government gives priority to state-owned companies, but the omnibus bill removes this priority.

The government plans to open up almost all business sectors to foreign investment and issue a positive investment list in an omnibus bill on job creation.

According to a draft of the bill obtained by The Jakarta Post, all business sectors will be open to direct investment, except those declared prohibited from such activity or those that can only be handled by the government.

The prohibited areas are narcotics, gambling, chemical weapons, ozone-depleting substances, coral extraction and fishing for endangered species based on the Convention on International Trade in Endangered Species of Wild Fauna and Flora (CITES).

The sectors that can only be handled by the government are those related to public services or defense and security, such as the primary weapons defense system, state-owned museums, as well as flight and sailing navigation systems.

Further details on the investments will be established in a presidential regulation, the bill states.

Currently, the government maintains a negative investment list (DNI), in which it regulates business sectors that are open, prohibited or open with certain conditions to foreign investment.

“If the language in the draft refers to foreign investment and the promised changes in the DNI are real, it would be welcome news for investors,” American Chamber of Commerce (AmCham) Indonesia managing director Lin Neumann told the Post on Saturday.

Neumann said there were many sectors such as health care, education and medical device manufacturing in which openness to 100 percent foreign ownership would draw major interest from American companies. “The real key will be if the government continues to move away from protectionism toward openness.”

Finance Ministry Taxation Director General Suryo Utomo said the government was ready to take the risk to attract more investment in a time of global uncertainty so that Indonesia’s economic growth would stay at 5 percent.

The taxation omnibus bill will reduce income tax rates for various kinds of income including reducing the corporate income tax to 20 percent and lowering by 3 percent the tax on publicly listed companies, income from dividends and interest rates.

The government has projected that the various tax reductions would potentially cut government revenue from income taxes by Rp 80 trillion.

“To compensate for the losses, the tax office will expand the bases of taxation as well as the number of taxpayers,” Suryo Utomo said.