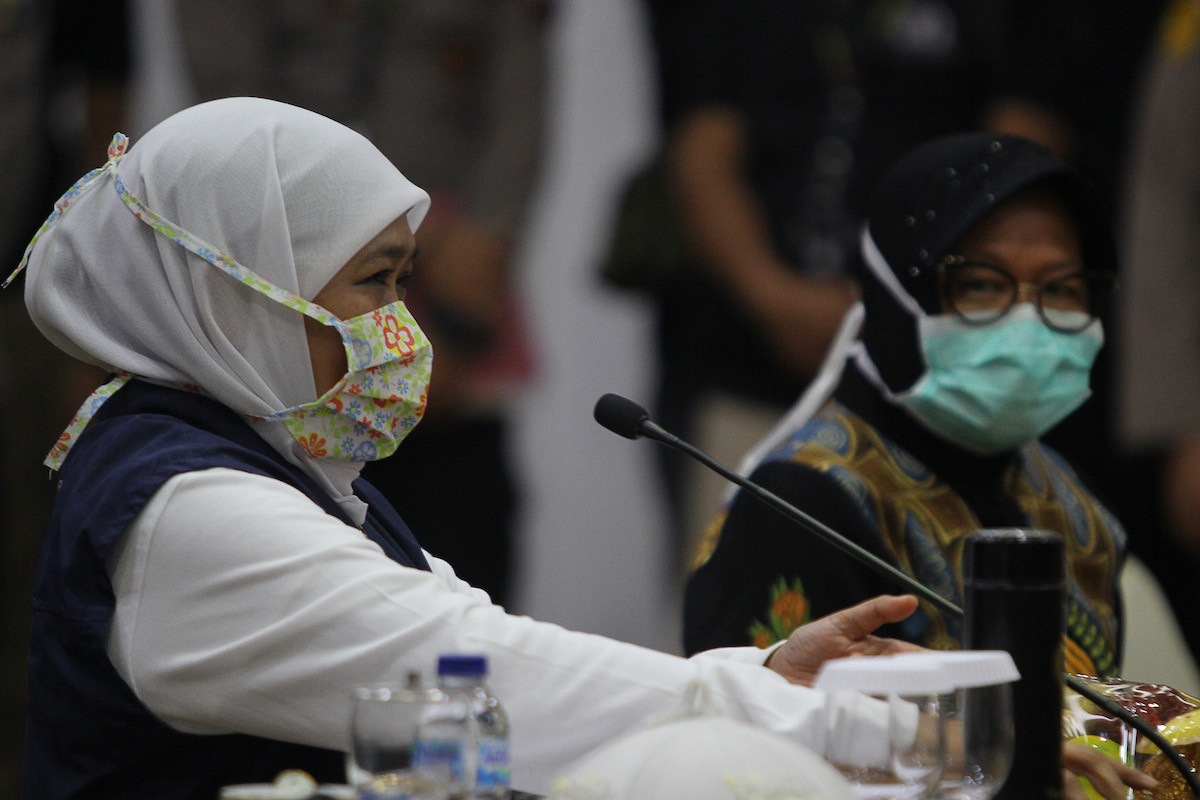 “The President gave instructions to uphold discipline. Indeed, there should be sanctions, whether fines or administrative. [Sanctions] are needed to increase public discipline, accompanied by the efforts to keep the economy’s wheels turning,” Khofifah said.

According to Masduki, Ma’ruf and Doni agreed that santri (Islamic boarding school students) who had not yet returned to pesantren were to refrain from doing so. “If it is possible, do long-distance learning,” he said.

Ma’ruf has also requested that only pesantren in “green” and “yellow zones” hold face-to-face instruction and that strict health protocols be put in place. Masduki added that pesantren were expected to administer routine polymerase reaction tests (PCR), in coordination with the local COVID-19 task force.

The National Police’s Criminal Investigation Department (Bareskrim) chief, Insp. Gen. Listyo Sigit Prabowo, has said that he will crack down on officers who were proven to have been involved with longtime fugitive and graft convict Djoko Tjandra, who is still at large.

Previously, the Indonesia Police Watch (IPW) released a statement claiming that Tjoko’s travel permit had been issued by Bareskrim through the civil servant investigators Coordinating and Oversight Bureau. Listyo then formed a joint team to investigate the alleged individuals involved in issuing the permit.

“If this is proven, I will take decisive action against the individuals involved. This is to maintain the spirit of the institution,” said Listyo.

The government expects the House of Representatives to finish deliberating the omnibus bill on job creation by late August or early September, Coordinating Economic Minister Airlangga Hartarto said on Tuesday. He added that lawmakers had finished deliberating “half of the chapters” in the bill. “The government is seeking to conduct structural reform through the omnibus bill on job creation,” Airlangga, who also serves as Golkar Party chairman, said in a virtual presser held by the European Business Chamber of Commerce (EuroCham) in Indonesia. “[The omnibus bill] will be a big push for Indonesia’s economy and help it transform as the fundamental problem we face is hyperregulation,” said Rizal Affandi Lukman, deputy for international economic cooperation at the Office of the Coordinating Economic Minister.

Taiwan-based Cathay Life Insurance, a subsidiary of Cathay Financial Holdings, is preparing to increase its ownership of PT Bank Mayapada Internasional (Bank Mayapada), the bank’s executive says. The publicly listed insurance company now owns 37.33 percent of Bank Mayapada, making it the bank’s biggest shareholder, followed by PT Mayapada Karunia Corporation, which owns 26.42 percent of the total shares. “They do have a desire to increase their ownership as part of their long-term strategy. In regard to the number of shares, what the composition of ownership will look like and when, are still being prepared by Cathay,” Bank Mayapada president director Hariyono Tjahjarijadi told The Jakarta Post on Monday. The Financial Services Authority (OJK) has reportedly given Cathay the green light to acquire 51 percent of the bank’s shares or more, which will make Cathay the majority shareholder.