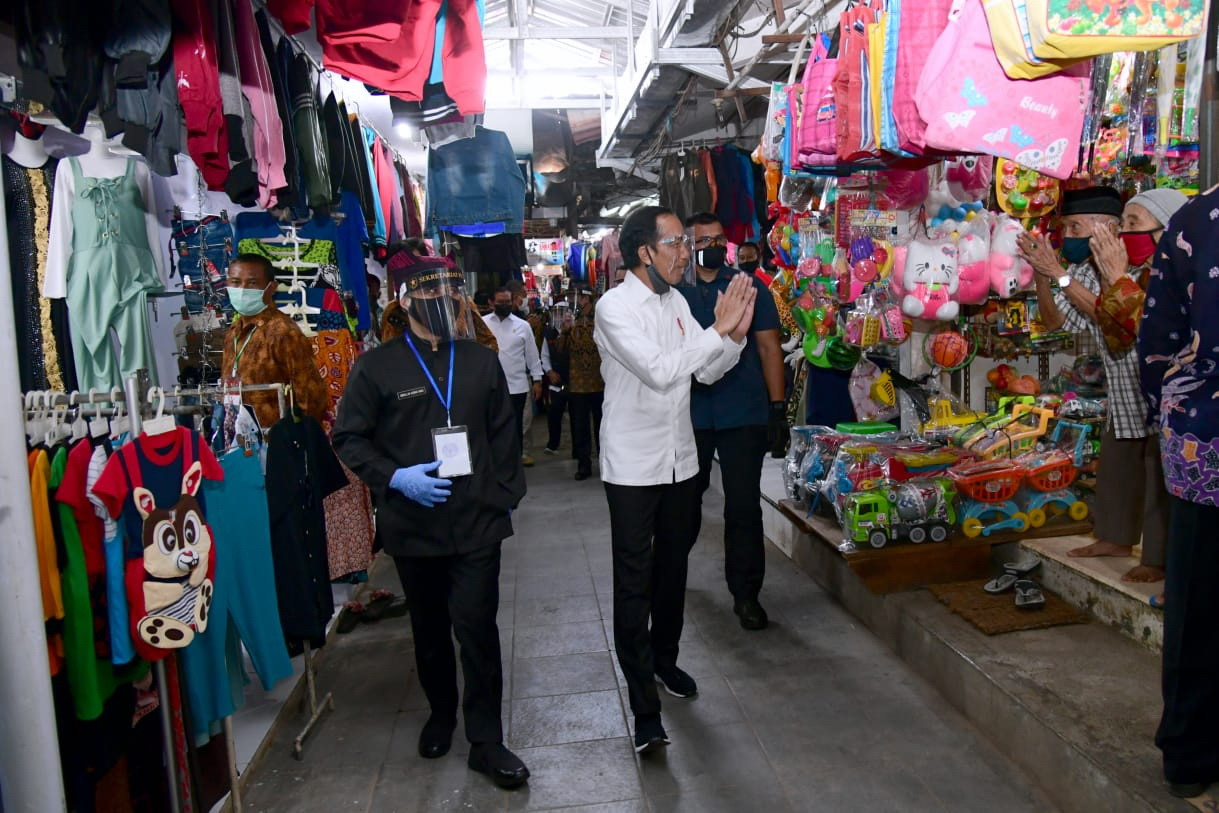 President Joko “Jokowi” Widodo has urged the East Java administration to decrease the rate of COVID-19 transmission in the region within two weeks.

On Thursday, Jokowi visited Surabaya and its neighboring cities in East Java, which have become the country’s COVID-19 epicenter after Jakarta. It is his first regional working visit as the government transitions into the so-called “new normal” period.

“I demand integrated and serious controls from all institutions in the region […] so we can handle and lower the number of confirmed cases […] within two weeks,” the President said during a visit to the East Java COVID-19 task force headquarters in the Grahadi Building in Surabaya.

The President urged COVID-19 task forces at the provincial, regency and municipal levels to cooperate and coordinate to contain the spread of the disease in the region.

On Thursday, 247 new COVID-19 cases were recorded in East Java, bringing the total official case tally to 10,545. The province is now slightly behind Jakarta, which has recorded a total of 10,600 cases.

Jokowi said East Java was currently recording the highest daily numbers of new COVID-19 cases of any province in the nation. “However, what keeps us optimistic is the fact that the region also has a good recovery rate, at 31 percent.”

As the COVID-19 pandemic triggers not only a health crisis but also an economic one across the world, President Joko “Jokowi” Widodo has reaffirmed that he will pursue a well-balanced approach that focuses on both. “We cannot push ahead with regard to the economy while putting the brakes on our health care at the same time,” said Jokowi during a visit to Surabaya, East Java.

Jokowi urged his ministers and regional heads to adopt a balanced approach that did not solely focus on either economic or health concerns. “I have always reminded governors, regents and mayors that accelerating or halting the economy and health care accordingly amid the pandemic is a delicate matter,” said Jokowi.

The number of COVID-19 infections in Indonesia continues to rise. On Thursday, 1,178 new cases were recorded, with most of the new cases found in East Java (247 cases) and Jakarta (196 cases). The total death toll has increased by 47 to 2,620. Meanwhile, the number of recoveries has also increased exponentially by 791.

A survey conducted by pollster Saiful Mujani Research and Consulting (SMRC) on the government’s “new normal” policy found that the policy had gained more support from informal, low-educated workers with below-average income. The survey found that the policy was supported by 83 percent of those with an elementary education, 83 percent of workers with an income of around Rp 1 million (US$70,77), 90 percent of ojek (motorcycle taxi) drivers and 84 percent of part-time laborers.

In the past decade, the dynamics of gangster operations in the capital city has experienced only little change. An unnamed police officer said well-established players such as John Kei from Maluku group, Thalib Makarim from Flores group and Hercules from East Timor group were still dominant players in the country’s gangsterism.

According to the source, even if the leader of a gangster group gets arrested, this does not mean that the whole group would automatically disband. “They [members of gangster groups] would wait for the right opportunity [to reassemble again]. In the case of John Kei, what happened was that his followers reconvened upon his release from prison,” said the source.

Back in 2012, John Refra, the real name of John Kei, received a 12-year sentence for the murder of PT Sanex Steel director Tan Harry Tantono. John was released in December 2019 on parole after completing two-thirds of his sentence. He was recently rearrested for allegedly masterminding attacks in two places that claimed a life and injured two others.

The source added that new players in gangster operations across the country had emerged, yet the police have identified these new players as affiliated with old players such as Hercules. “However, when they [the new players] got arrested, they did not want to admit their affiliation with the old players,” explained the source.

Association of Elections and Democracy (Perludem) executive director Titi Anggraini has scrutinized the absence of a stipulation prohibiting military and police officers from voting in a draft revision to Law No. 7/2017 on general elections. The prohibition was originally stipulated in Article 200 of the law.

“The prohibition [of military and police officers from voting] cannot be found in the draft revision of the Election Law being deliberated at the House of Representatives,” said Titi during a virtual discussion on Thursday. Titi hoped that the absence of such prohibition was only due to the drafters’ carelessness and had not been deliberately omitted.

Head of House Commission II, Ahmad Doli Kurnia, declined to give further clarification on the matter. “I will not comment on each article in the proposed revision, especially in regard to the military and the police because it is a sensitive matter for us lawmakers,” said Doli.

After investigating nearly six months, the Attorney General’s Office (AGO) has named 13 asset management companies and an official at the Financial Services Authority (OJK) as suspects in the corruption and money laundering case surrounding state-owned insurer PT Asuransi Jiwasraya.

Jiwasraya is alleged of mismanaging the investment of its premium income from its JS Savings Plan in multiple assets. As a result, it failed to pay out Rp 16 trillion (US$1.1 billion) in matured policies in February to policyholders.

“Despite being named as a suspect in the case, we haven’t arrested the OJK official as yet,” Hari said at a press conference on Thursday.

Hari announced that 13 asset management companies had also been named as suspects in the case. The companies allegedly caused losses of Rp 12.35 trillion to the state, 73.46 percent of the Rp 16.81 trillion in state losses that Jiwasraya’s mismanaged investment had incurred from 2008 to 2018, according to the Supreme Audit Agency (BPK).

The 13 companies named as suspects in the Jiwasraya case are:

Indonesia is headed toward a recession, with the economy expected to experience consecutive contraction in the second and third quarters, respectively by minus 3.8 percent and minus 1.6 percent.

In its World Economic Outlook 2020, the International Monetary Fund (IMF) further revised its projection for Indonesian economic growth from 0.5 percent to minus 0.3 percent this year.

President Joko “Jokowi” Widodo acknowledged that the latest IMF report reflected the challenging times for Indonesia and the world. “Yesterday, I received information [about the IMF report] that the global economic crisis is real, and we will all experience it,” he said.

State-owned banks BRI, Mandiri, BNI and Bank BTN have received combined funds of Rp 30 trillion (US$2.12 billion) from the government to stimulate the real sector.

Deputy Finance Minister Suahasil Nazara said that the fund was disbursed to the four banks on Thursday, and that banks could use it immediately. The banks were expected to triple the fund to Rp 90 trillion through corporate lending and loan schemes for micro, small, medium enterprises (MSMEs).

Suahasil said that the fund was intended as a “booster” to accelerate recovery in the real sector during the easing of the large-scale social restrictions (PSBB). He promised that the government would increase the amount of funding if it proved effective in stimulating the real sector.

He added that the banks were free to decide how to use the fund, as long as it was for the purpose of stimulating the real sector and not for other purposes such as buying government bonds or foreign currency. The fund could be used as debt restructuring, working capital loans or other means to stimulate business activities.

“Banks better understand their debtors, their needs and the conditions in the field, so therefore, we are leaving [the decision] to the banks,” he said.

Former finance minister M. Chatib Basri said that the government’s fund placement of Rp 30 trillion in the four state-owned banks was not an urgent need, as the banks had enough liquidity.

Chatib instead pointed to falling demand as the problem in the Indonesian economy. The government should therefore use the fund to stimulate demand through facilities like social assistant programs, instead of pushing the banks to extend loans to the real sector.

Once demand had recovered, Chatib said, the government could encourage banks to extend loans to businesses to boost productivity.

“Don’t be like China, where production was boosted on resuming economic activities. But no one is buying [the products],” he cautioned.

Indonesian Chamber of Commerce and Industry chair Rosan Roeslani shared Chatib’s view, saying that banks, especially state-owned banks, were benefiting from shifting third-party funds from small banks to big banks, so they did not need additional cheap funds from the government.

The recent rise in gold prices hit a new high during Wednesday’s trading of $1,769.1 per troy ounce for August delivery, the highest since 2012. Although the gold prices have been corrected since then, they remain high.

Goldman Sachs said that demand for gold had increased by 600 tons this year and predicted that gold prices would reach $2,000 within 12 months.

SGMC Capital CEO Massimiliano Bondurri also expected gold prices to rise to near $2,000 per troy ounce by the end of the year.

Meanwhile, HFX International Berjangka chief commissioner Sutopo Widodo said that investors were rushing to gold due to the global economic uncertainties that have driven down returns on most investment instruments.

When the global economy was in crisis, investors tended to run to safe havens such as gold and the US dollar, said Sutopo, who expected gold prices to stay at above $1,750 per troy ounce this week.