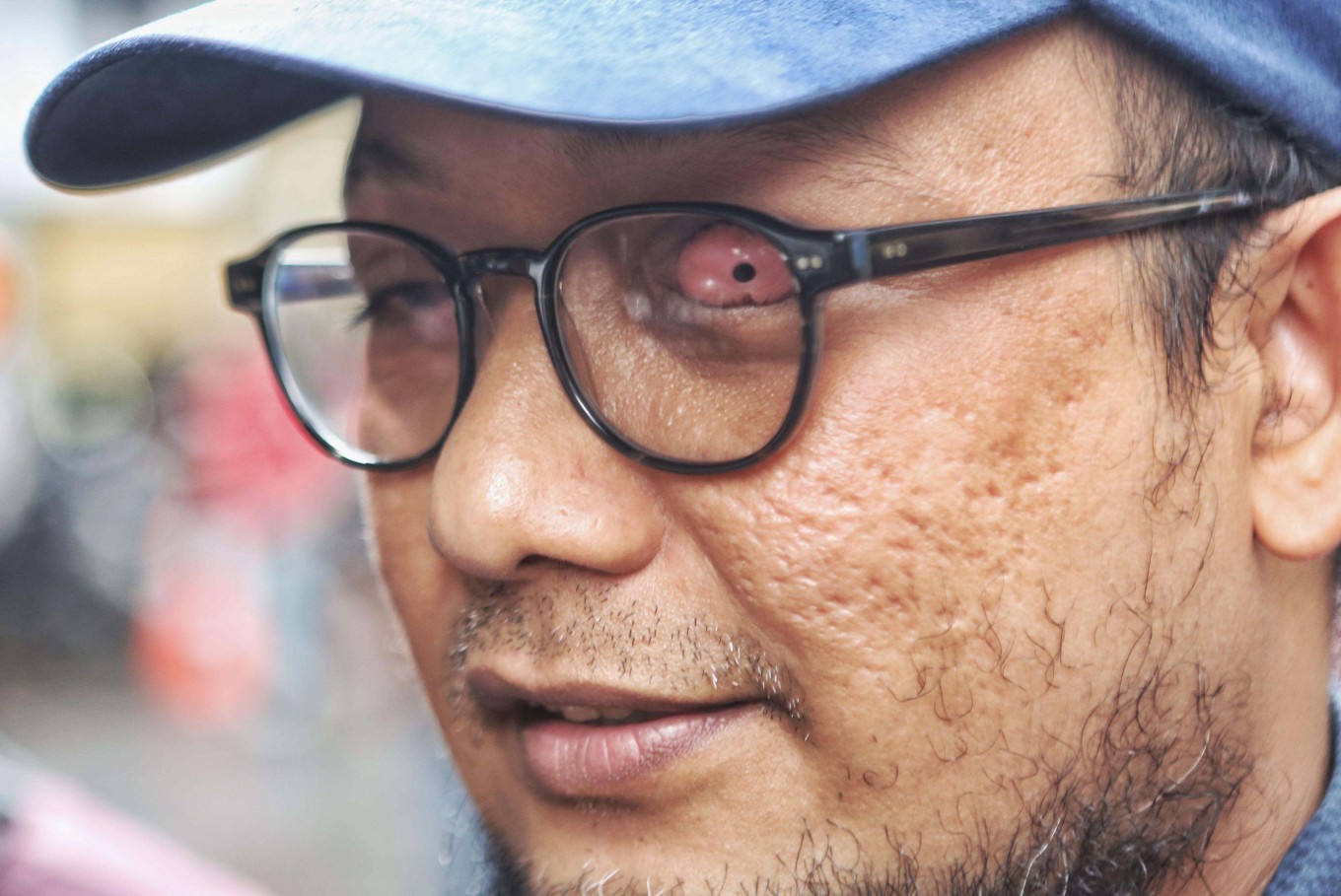 Corruption Eradication Commission (KPK) investigator Novel Baswedan arrives at the Jakarta Police headquarters in Jakarta, on Dec. 6, 2019. Novel was questioned as the victim in the acid attack against him in April 2017. (JP/Seto Wardhana)

President Joko “Jokowi” Widodo has stated he will not intervene in the legal proceedings regarding the acid attack against Corruption Eradication Commission (KPK) investigator Novel Baswedan, with a presidential aide saying the country's leader hoped the judges would hand down a fair verdict in the case.

“The President respects the ongoing legal proceedings, in which he has faith and hopes the panel of judges will hand down a verdict that is fair,” presidential spokesperson for legal affairs Dini Purwono said Thursday.

She said Jokowi believed the judges would pay close attention to the criminal articles under which the defendants have been charged, as well as the evidence gathered during the investigation. She also said Jokowi had previously called for a speedy completion of the investigation and for members of the National Police to be scrutinized.

“With the trial ongoing, we need to understand that the President, as the leader of the executive branch, cannot intervene in the authority of the judiciary,” Dini said as quoted by Kontan.

Previously, President Joko “Jokowi” Widodo ordered the government to test at least 20,000 samples a day. The government, however, has only been able to meet the target since Thursday, when it tested 20,650 samples.

Fourteen retired military officers visited President Joko “Jokowi” Widodo at Bogor Palace, West Java, on Friday, during which they reportedly conveyed their thoughts on the importance of safeguarding the country’s unity, sovereignty and ideology. The visit of the retired military officers came amid widespread criticisms against the Pancasila Ideology Guidelines (HIP) bill currently being debated in the House of Representatives due to its contentious articles that some fear could lead to the emergence of communist ideology in the country.

The Finance Ministry has revised down its gross domestic production (GDP) growth projection for the second quarter from previously a contraction of 3.1 percent to 3.8 percent.

“We will face complex challenges in the second quarter with a strong possibility of a negative growth rate, a contraction of 3.8 percent, according to the ministry’s Fiscal Policy Agency [BKF] estimate,” said Finance Minister Sri Mulyani Indrawati.

She expressed her hope that the country could avoid a second wave of COVID-19 infections so that the economy could begin to recover in the third and fourth quarter.

The Manpower Ministry recorded 1.7 million laid-off or furloughed workers during the pandemic and expects the number to increase further.

“We anticipate the country’s unemployment to swell by 2.92 million to 5.23 million workers and will do everything we can to prevent the unemployment rate from reaching double digits,” said Manpower Minister Ida Fauziah.

To mitigate the impacts of COVID-19 on the labor market, the government has prepared six strategic policy measures: an economic stimulus package for businesses to avoid lay-offs, income tax exemption for workers, social security programs for both formal and informal workers, preemployment card for laid-off and furloughed workers, a stimulus policy for labor-intensive manufacturing businesses and protection for all Indonesian migrant workers.

Indonesian Hotel and Restaurant Association (PHRI) deputy for tourism destinations Johnnie Sugiarto said amusement parks’ revenue was predicted to fall by 70 percent this year due to the COVID-19 pandemic.

The reopening of amusement parks in Jakarta, to start on Saturday, is highly appreciated by the association, even though they can only operate at 50 percent capacity.

The revenue obtained from reopening is needed to improve the parks’ cashflow.

“We need cash to maintain our facilities, which is about 10 percent of our total costs,” Johnnie added.

Local think-tank Institute for Essential Services Reform (IESR) and the government are working on an ambitious billion-dollar plan to recover Indonesia’s virus-ridden economy by installing thousands of rooftop solar panels.

The scheme ultimately entails installing panels with a combined capacity of 1 gigawatt of peak power (GWp) a year for millions of Indonesia’s poorest households over the next four to five years. Dubbed the Solar Archipelago (Surya Nusantara) plan, it is expected to cost Rp 15 trillion (US$1.07 billion) annually.

IESR estimates that the scheme will generate up to 22,000 jobs from installing panels and save the government billions of dollars in electricity subsidies.

He added that the project “realistically” kicked off with 100 to 200 megawatt s(MW) in Nusa Tenggara and Bali in its first year. Those provinces have the highest electricity supply costs (BPP) in Indonesia.