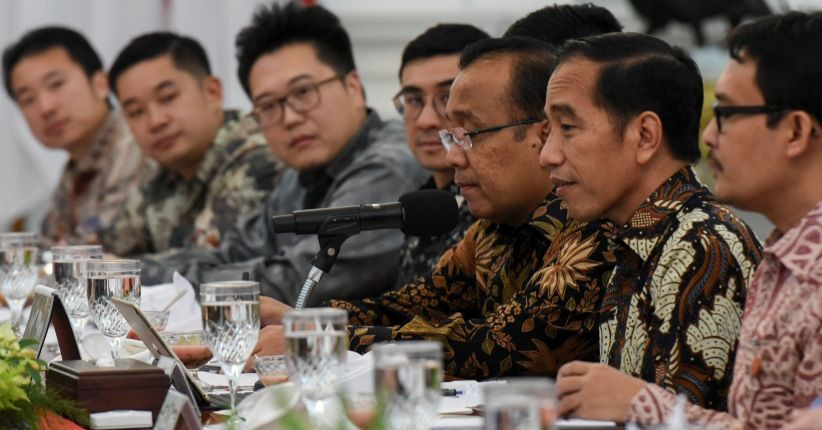 President Joko “Jokowi” Widodo has reminded his Cabinet to increase the “sense of crisis”, put aside their sectoral egos and cut through red tape to strengthen the country’s COVID-19 response.

President Jokowi has instructed the National Disaster Mitigation Agency (BNPB) to intensify its performance and maintain urgency so that its officials can optimize their work.

He also highlighted the slow disbursement of the government’s COVID-19 response budget. “Out of the Rp 695 trillion in the COVID-19 response stimulus, only 20 percent has been disbursed. That number is too low,” he said.

Presidential Secretariat head Heru Budi Hartono said in a written statement issued earlier today that his party would strengthen health protocols in the Presidential Palace, as more guests had tested positive for COVID-19.

Heru explained that anyone who wanted to visit the palace would have to undergo a swab test prior to their appointment with the President. In addition to the swab test, guests also had to undergo a rapid test on the day of their visit.

Heru added that 2 to 2.5 meters of distance must be maintained between guests. The palace also added acrylic barriers to the table used by the President to meet his guests.

The House of Representatives may not conclude the deliberation of the omnibus bill on job creation in August as it is still working through problems, including labor disputes and editorial issues.

The House Legislation Body (Baleg) has resolved 3,172, or almost half, of the 6,652 problems in the bill’s inventory problem list (DIM). Baleg chairman Supratman Andi Agtas told The Jakarta Post on Thursday that he was not sure the bill could be passed in August.

Supratman explained that the body had grouped the 1,430 problems into five categories. Among them were those regarding the term "license", which would be changed into “business licensing” to comply with the government’s request. "If we could agree on them all, we would still have 2,050 problems,” said Supratman.

Willy Aditya of the NasDem Party, who is also the body’s deputy chairman, said the government and the House would continue deliberations despite the dispute surrounding labor issues. However, NasDem still urged the government to drop labor provisions from the bill. Willy said labor provisions in the bill should instead be included in revisions to other laws, for example, revisions to the Labor Law or the Industrial Dispute Settlement Law.

Statistics Indonesia (BPS) has recorded a 1.54 percent year-on-year (yoy) inflation rate and a 0.1 percent month-to-month (mtm) deflation in July. Because of the deflation, accumulative inflation from January to July this year decreased 0.98 percent. July’s deflation was driven by 0.73 percent deflation in the food, beverages and tobacco category, BPS head Suhariyanto said.

Privately owned oil and gas company PT Medco Energi is interested in buying the 35 percent participating interest of Netherlands-based Royal Dutch Shell in the Masela Block. Medco Energi’s president director Hilmi Panigoro said the company would pursue the acquisition if the price was appropriate. According to energyvoice.com, Shell is aiming to acquire US$2.2 billion from the divestment process. Research firm Rystad Energy predicts Shell to face difficulties in finding a buyer for its 35 percent participating interest in the block, although the Masela Block is located near the lucrative Asian market.

Freddy Widjaja, the son of Sinar Mas Group founder Eka Tjipta Widjaja, has retracted his Rp 673 trillion (US$45.8 billion) lawsuit against his five step-brothers over the inheritance rights of companies under the Sinar Mas Group. Central Jakarta District Court spokesperson Bambang Nurcahyono has confirmed the lawsuit withdrawal by Freddy, citing the plaintiff’s plan to improve the arguments in the lawsuit. Freddy’s lawyer, Yasrizal, said the retraction was made freely and willingly without any pressure. “The trial will resume next week with a hearing of the defendant’s response over the plaintiff’s retraction,” Bambang added.

State-owned energy giant Pertamina has begun constructing three oil and gas rigs worth US$105 million in the gas-rich offshore Mahakam Block to boost domestic production. Pertamina, through upstream subsidiary PT Pertamina Hulu Mahakam (PHM), signed a deal with engineering contractor PT Meindo Elang Indah to have the rigs built by the fourth quarter of 2021. “At its peak, these three rigs will contribute up to 120 million metric standard cubic feet per day (mmscfd),” PHM president director Danar Dodjohadi said on July 29. PHM, Indonesia’s fourth most productive gas company, produced 624 mmscfd in the first half of the year. It expects the three rigs to provide 20 percent of its total production by 2024.