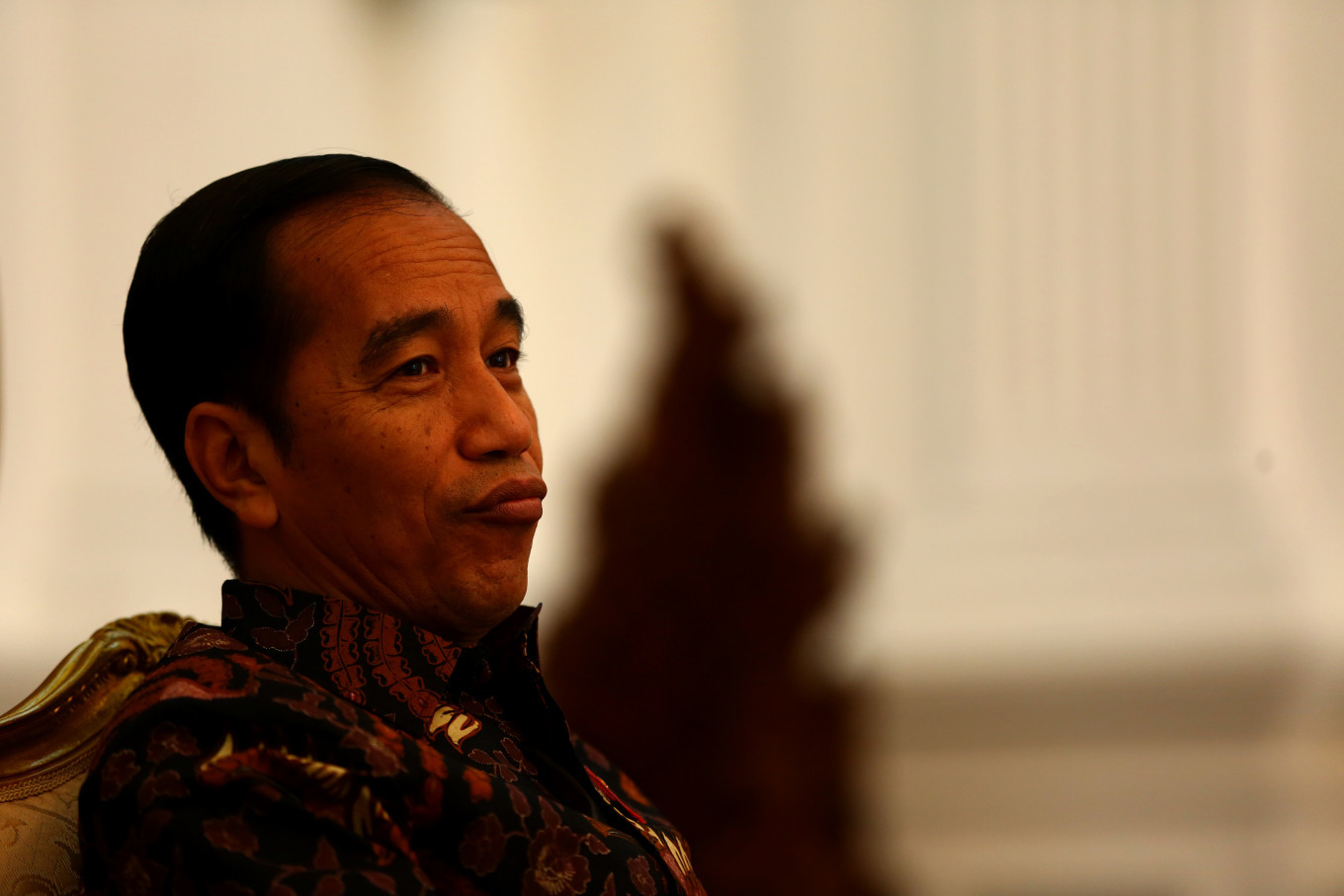 President Joko 'Jokowi' Widodo during an interview with 'The Jakarta Post' at the State Palace on Tuesday.(JP/Wienda Parwitasari)

The National Police are looking into former military officer from the Army’s Special Forces (Kopassus) Lt. Col. (ret) Fauka Noor Farid, whose name was mentioned in the questioning of three suspects of attempted assassination of a number of public figures.

The information appeared in video footage of the suspects’ confessions over the May 21-22 riots, which was shown to the press at the Office of the Coordinating Legal, Politics and Security Affairs Minister on Tuesday. The press conference also announced a confirmed connection between Prabowo’s close aide and former Army Strategic Reserves Command (Kostrad) chief of staff Maj. Gen. (ret) Kivlan Zen and United Development Party (PPP) politician Habil Marati in regard to the alleged assassination plan. Both are suspected of masterminding the plan.

During the same press conference, National Police spokesperson Insp. Gen. Mohammad Iqbal said the police would start a more thorough investigation into the riots and the assassination attempt so as to verify current findings and discover possible players behind the acts. Media Indonesia’s sources indicated three possible actors were behind Zen in plotting the plan.

The National Police announced Tuesday the arrest of United Development Party politician Habil Marati for allegedly funding the May 21-22 riots.

During a press conference at the Office of the Coordinating Legal, Political and Security Affairs Minister the police presented their findings of a link between illegal arms and an assassination attempt and the riots in attempt to show transparency in handling the case following criticism from civil society groups.

Tempo magazine chief editor Arif Zulkifli accepted an objection from Maj. Gen. (ret) Chairawan, former leader of the Army’s Special Forces (Kopassus) Tim Mawar, which was involved in the kidnapping of antigovernment activists in 1997-1998. The team members were named in Tempo’s reportage about the riots last month.

“We will follow the due process of law and respect any objections filed with the Press Council against our coverage.”

On Tuesday, Chairawan and his lawyer reported Tempo to the Press Council after the media published a report titled “Mawar Team and Sarinah Riot” on June 10. In his report, Chairawan argued that Tempo was trying to link his former team with the riots and intentionally build public opinion against the military. “There is no more Mawar team. It was disbanded in 1999. The news is damaging my reputation and unethically judging some actors without verification.”

According to BNPB data, since last Sunday, floods have affected 1,592 families (5,693 people) in 40 villages and six districts in North Konawe regency.

President Joko “Jokowi” Widodo has given a signal that the doors are open for the opposition Gerindra Party, led by presidential rival Prabowo Subianto, to join the government coalition during his second and final term in office.

In an exclusive interview with The Jakarta Post on Tuesday, Jokowi said he was open to cooperating with anyone who sought to work together in developing the world’s third-largest democracy when he got asked about the chance of welcoming Gerindra into the ruling coalition.

The possibility of Gerindra joining the coalition further widens the chance for Jokowi, who defeated Prabowo by a margin of 17 million votes in the April election, to secure more political support and a stronger grip at the House of Representatives for the next five years.

Executives from three ruling political parties – the Indonesian Democratic Party of Struggle (PDI-P), the National Awakening Party (PKB) and the United Development Party (PPP) – have also confirmed that the coalition had discussed the possibility of inviting Gerindra to the camp. One of the sources, who requested anonymity because of the sensitivity of the issue, said most of the parties in the ruling coalition were more interested in Gerindra, the largest party in the opposition, than the other political parties in the rival camp.
BUSINESS AND ECONOMICS NEWS AND HEADLINES

President Joko “Jokowi” Widodo reaffirmed his policy direction for his second presidential term during an exclusive interview with Bisnis Indonesia daily on Tuesday.

In the interview, the President said his priorities in his second five-year term would be focused on infrastructure and human resource development, as well as reform in the bureaucracy and government institutions.

The President also said the new cabinet would be filled with ministers who have managerial capacity and character of an executor. He would also appoint ministers who are 30 year old to make the cabinet more dynamic.

The President also highlighted the importance of human resource capacity building in supporting the national economy. With human capital development, the President expects Indonesia can improve the quality of economic growth so that growth can reduce the social gap in the country.

President Joko “Jokowi” Widodo said one of his strategies in his second five-year term would be to enable Indonesia to benefit from the trade conflict between the United States and China.

During an exclusive interview with Kontan on Tuesday,  the president highlighted that Indonesia should not only focus on the negative impacts resulting from the trade war, but also think of the opportunities resulting from the conflict. For example, the President mentioned Indonesia could now tap into the markets usually dominated by products from the two warring countries.

The President has sent a team of experts to the US to explore the potential market for Indonesian goods. The initiative will involve government-to-government and government-to-business partnerships.

Indonesia has booked a surplus in trade with the US in the last five years. The surplus in the first quarter was $2 million.

Meanwhile, to counter the risk of Chinese goods flooding the Indonesian market, the President plans to further improve Indonesian product competitiveness and launch a campaign to support local products.

The G20 meeting in Fukuoka, Japan,has made a progress in setting the rules on a digital tax for technology companies such as Google, Facebook, Amazon and Netflix.

The tax will be based on a common rule for all G20 member countries, while the mechanism for tax collection will depend on each country.

Organization for Economic Cooperation and Development (OECD) secretary-general Angel Gurria hailed the progress and said the agreement made way for further exploration for a long-term solution and added details for the OECD/G20 Inclusive Framework on Base Erosion and Profit Sharing (BEPS) that proposes to change the concept of user participation, market intangibles and significant economic presence.

Finance Minister Sri Mulyani sees the global consensus is good to fundamentally change the tax system, implement a level playing field and find a solution for fair taxation globally. “However, Indonesia cannot wait for the global consensus because of our need for development funding,” Sri said.

The government has prioritized changing the definition of permanent establishment and developing a policy formula to quantitatively calculate significant presence.

Trade Minister Enggartiasto Lukita exchanged on Tuesday an instrument of ratification (IoR) of the agreement with vice minister for trade at the Chile Foreign Ministry, Rodrigo Yañez Benitez. The exchange kickstarts with a 60-day period until Aug.10, when the Indonesia-Chile Comprehensive Economic Partnership Agreement (IC-CEPA) will come into force in both countries.

“Both of us have agreed that with the IC-CEPA, Chile will become our trade hub in Latin America and Indonesia will become Chile’s hub for ASEAN countries,” Enggartiasto said Tuesday shortly before the exchange at the Trade Ministry building in Jakarta.

Bilateral trade between Indonesia and Chile in 2018 was US$274.1 million, with Indonesia booking a surplus of US$43.9 million.

Demand for digital talent in Indonesia’s technology industry, which includes software engineers, analysts and data scientists, is expected to rise as Indonesia’s digital economy is predicted to triple in transaction volume from US$27 billion in 2018 to US$100 billion by 2025, according to a Google-Temasek report.

Yet, Communications and Information Minister Rudiantara said the country had a shortfall of 9 million digital talents to meet a targeted 7 percent economic growth by 2030.

In the ride-hailing industry, Grab Indonesia launched in May an Engineering Talent Future Leader internship program, which allows UI students to apply for internships at either Grab’s Jakarta or Singapore offices for between 6 and 9 months. Meanwhile, rival Go-Jek signed its memorandum with UI in April pledging exclusive internships, joint studies and priority recruitment for UI students.