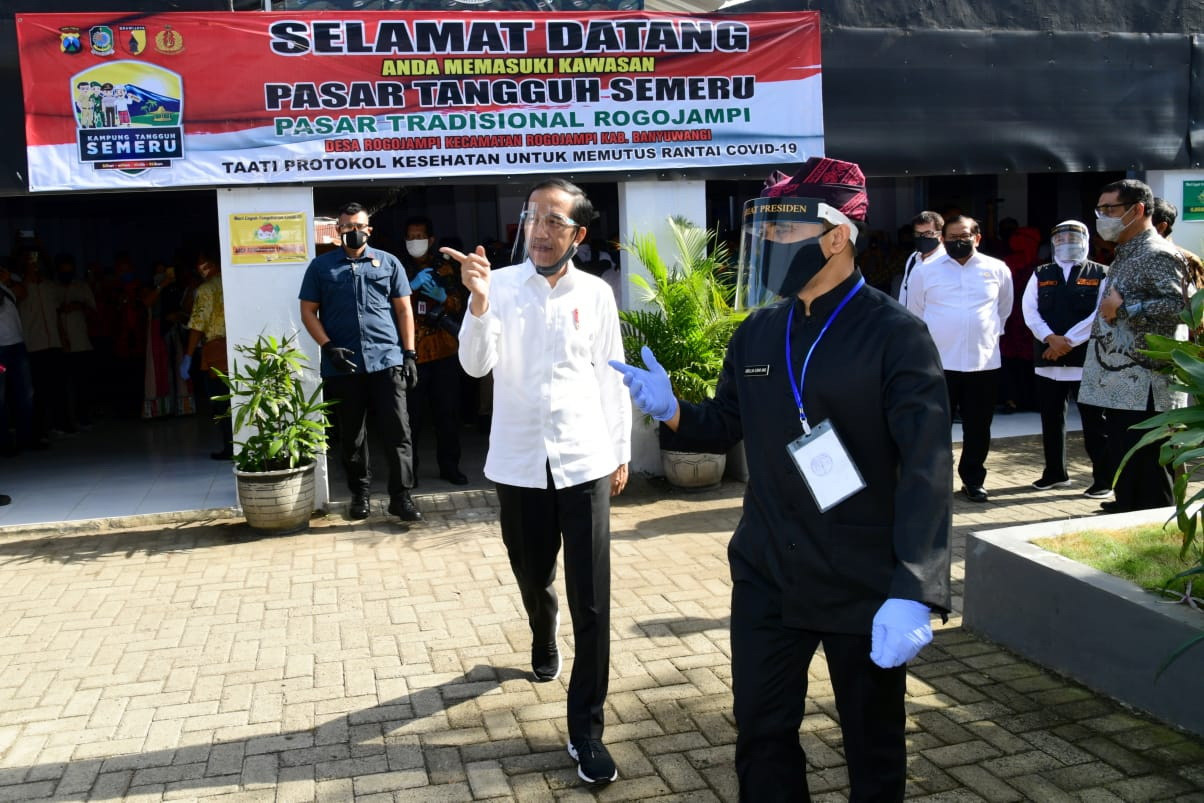 “I want more testing, tracing and treatment in these eight provinces,” Jokowi instructed his aides during a meeting on Monday.

The President has also ordered his aides to increase the capacity of polymerase chain reaction (PCR) tests, also called swab tests, as well as the number of laboratories carrying out the tests.

Jakarta, the initial epicenter of the COVID -19 outbreak in the country, is mulling over whether to reimpose the large-scale social restrictions (PSBB) as the daily tally of new cases has hit record highs.

Jakarta reported 281 new cases on Monday for a total tally of 14,797 confirmed cases and 697 COVID -19 deaths. The latest record high came a day after Jakarta Governor Anies Baswedan announced that the city might consider tightening the PSBB.

Jakarta has gradually relaxed its restrictions since June 4, with businesses and offices reopening under a new set of health protocols. It has also reopened public green spaces and outdoor tourist spots.

“If this continues, we may have to return to [the PSBB]. […] Do not let this situation reach the point where we have to pull the emergency brake,” Anies said on Sunday. The “emergency brake” policy would see the enforcement of tighter restrictions than the PSBB, which had allowed only eight essential sectors to operate.

Anies acknowledged the persistence of community transmission in Jakarta, saying that while the majority of new cases were the result of the administration’s massive “active case finding” efforts, the city’s positivity rate – the percentage of people tested that present a positive test result – was cause for concern.

A number of leaders and former leaders of the Corruption Eradiation Commission (KPK) have objected to the government’s plan to reactivate its “corruptor hunting team” to hunt down graft fugitives. KPK deputy chair Nawawi Pomolango said that the team, which was first formed during Susilo Bambang Yudhoyono’s presidency, was unnecessary because it had not worked.

Nawawi said that the government should instead improve coordination between law enforcement and government agencies.

“As for the KPK, we have tried to restrict and monitor the movements of graft convicts,” he said.

Former KPK deputy chair Laode Muhammad Syarif said that it was more important for the government to increase its commitment to hunting down graft convicts. “The point in apprehending fugitives is to utilize all channels,” said Laode.

He added that the government should also increase the number of extradition treaties it had with other countries. If the government insisted on reviving the team, Laode said that several changes needed to be made to its operational procedures.

The President said on Monday that he would be dissolving 18 government agencies to increase effectiveness and generate budgetary savings.

Jokowi added that his recent fiery speech to the Cabinet was intended to motivate his ministers to work harder in mitigating the COVID-19 health crisis.

State Secretary Pratikno said earlier that the ministers had responded immediately to Jokowi's warning, as seen in increased spending and progress in several government programs.

"Now [the situation has] improved and hopefully, it will continue to improve. If so, a reshuffle will be unnecessary,” Pratikno said.

The Judicial Commission began its search for a new administrative court justice and eight ad-hoc court justices on Friday.

The commission aims to fill one vacancy in the state administrative high court, the court of final appeal for tax disputes cases that falls under Supreme Court jurisdiction. It is also seeking an additional justice with broad knowledge of the Tax Law, because the court currently has only one justice specializing in the law. The commission is also seeking two new justices specializing in industrial relations to work with the current six ad-hoc court justices in assisting the Supreme Court with labor dispute cases, as well as six ad-hoc court justices specializing in corruption to succeed six outgoing justices.

The Judicial Commission’s Aidul Fitriciada Azhari, who manages judicial appointments, said that the commission would focus on quality over quantity in its selection process.

The country’s top court has said that it was overwhelmed by the large number of cases it needed to hear amid the shortage of justices. It issued 20,058 decisions in 2019 compared to 17,638 in 2018, improving its productivity to almost 99 percent from 95 percent the preceding year. It issued decisions on 96 percent of all cases, or more than 19,000 cases, in less than three months from the time the cases were filed at the court.

Bank Mayapada is in need of capital to offset problematic loans. Its non-performing loan (NPL) rate is 6.94 percent. The Supreme Audit Agency (BPK) found that the bank had given a total of Rp 4.33 trillion (US$301.64 million) in loans that violated healthy, prudent and good governance provisions to 18 borrowers in 2018. Before that, the bank had 5 problematic borrowers with Rp 632 billion in loans in 2017 and 30 problematic borrowers with Rp 8.01 trillion in 2018. The OJK put the bank on the intensive supervision list on Jan. 29.

Dato Sri Tahir Tahir, who owns 57.28 percent of the bank, denied that the capital injection by Cathay would dilute his stake. He had previously injected Rp 4.5 trillion into Mayapada this year: Rp 1 trillion in cash and Rp 3.5 trillion in properties.

The government is trying to revive the airline industry by creating more opportunities for state officials to fly in their official capacities. Coordinating Maritime and Investment Ministry secretary Agung Kuswandono signed a circular on Jul. 6 asking seven institutions to coordinate an assignment scheme for trips from July to November.

The letter also said government business should be located in priority tourism destinations such as Danau Toba, Labuan Bajo, Bali and Mandalika.

Transportation Ministry air transportation director general Novie Riyanto said the airlines and the tourism industry were struggling to survive. Therefore, the government was trying to boost the sectors through company and government business trips.

The Financial Services Authority (OJK) has said banks are starting to expand credit and have a more optimistic business plan in the second semester. In addition, the authority found the banks were relatively resilient, as could be seen in the solid levels of capital, liquidity and credit risk.

Banks are asking the Financial Services Authority (OJK) to extend the OJK regulation No. 11/2020 on debt restructuring from a due date in March 2021 to one in March 2022. State-owned bank association (Himbara) chairman Sunarso said the extension would help achieve growth in the real sector.

The Maritime Affairs and Fisheries Ministry requires companies to have a lobster farm in order to obtain licenses to export lobster eggs. However, many exporters are suspected of having broken their partnerships with lobster breeders once they obtained the license.

The abuse of the partnership between exporters and breeders was found in East Lombok, West Nusa Tenggara. Instead of raising lobsters from eggs, the exporters bought consumption-size lobsters and moved them to floating cages in their aquafarm to claim they were the result of cultivation.

Some companies also bought lobsters with a weight above 50 grams from breeders to be set free in the ocean and claimed them as results of their own cultivation.

The ministry’s director of lobster eggs, Coco Kokarkin, said his side had assessed the partnership issue. However, the government currently had no sanctions stipulated for companies who abused the partnership.

The Indonesian economy stands a chance of recovering faster and growing this year if the government implements health protocols effectively to control the spread of COVID-19 and if the fiscal stimulus is disbursed properly.

State-owned Bank Nasional Indonesia chief economist Ryan Kiryanto said the government had to accelerate economic growth in the third quarter to achieve yearly growth. In order to do that, he said the government should boost spending through the economic stimulus programs, such as the social safety net and the preemployment program, while curbing the spread of COVID-19 to prevent a second wave.

The gross domestic product is expected to fall between 2.5 percent and 3.5 percent year-on-year in the second quarter. If the government boosted spending and contained virus’ spread, Ryan estimated the economy could grow up to 0.5 percent. If a second wave takes place, he said, the economy would recover in a Nike-shaped manner, which would take a long time.

According to Core Indonesia researcher Yusuf Rendy Manilet, although the government has improved ease of investment in the health sector, enforcement in controlling the spread of infection is still lacking. Therefore, he suggested stricter health protocol enforcement, especially in red zone provinces.

The government has issued a regulation that gives the Deposit Insurance Corporation (LPS) more room to manage its own liquidity and to prevent banks from failing in an effort to stabilize the country’s financial system.

Under Government Regulation (PP) No. 33/2020 on the LPS’ authority to impose measures to deal with financial stability issued on July 7, the corporation can now place funds in banks during the economic recovery period, among other things. The placement aims to strengthen the LPS’ liquidity and anticipate and solve financial problems that can result in bank failure.