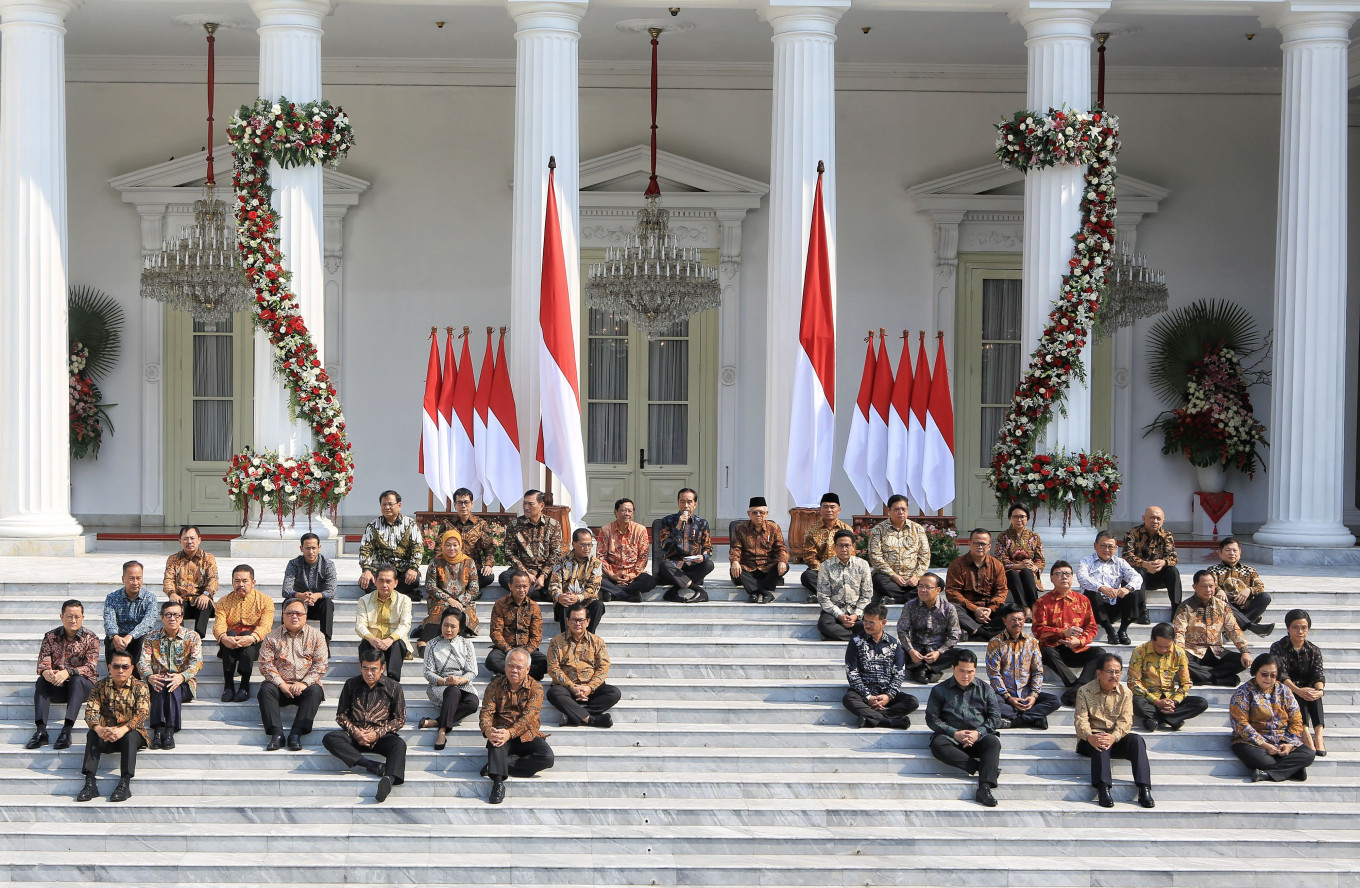 In a video uploaded to the Presidential Secretariat’s official YouTube channel on Sunday, President Joko “Jokowi” Widodo said he was ready to take extraordinary measures, including reshuffling his Cabinet, should his ministers fail to effectively curb the COVID-19 outbreak.

Jokowi further said he would not hesitate to disband state agencies that proved to be inefficient as well. The President, however, did not provide more details on which agencies he would potentially disband.

In the video, which was apparently shot during a Cabinet meeting on June 18, Jokowi lambasted his aides for not taking both health and economic crisis seriously and for not working extra hard to mitigate the current extraordinary circumstances. He then urged all ministries to accelerate their spending in order to stimulate the economy.

Jokowi pointed to the state budget for the health sector in exemplifying slow spending. He also called on the Health Ministry to immediately pay out the financial incentives promised to health workers on the frontline of the COVID-19 outbreak.

As the government rolls out health protocols across numerous sectors, cities, regencies and provinces are set to entirely lift large-scale social restrictions (PSBB) in July, with none — even those in high-risk areas — planning to extend their partial lockdown measures.

West Java, the country’s most populous province and third hardest-hit by the COVID-19 pandemic, decided to lift its PSBB measures, as the rate of new cases had dropped in the past six weeks.

Jakarta, the province with the second-largest number of cases and deaths, is set to end its PSBB phase on Thursday. Businesses and offices have gradually reopened since June 15.

However, the lifting of PSBB measures does not mean that the coronavirus threat has passed. As of Sunday, Indonesia has recorded 54,010 confirmed cases of COVID-19, the highest in Southeast Asia, with 2,754 fatalities and 22,936 recoveries.

An outbreak risk map produced by the national COVID-19 task force shows that 57 of the country’s 514 cities and regencies are still classified as red zones, or areas with high rates of transmission, including Jakarta and South Tangerang in Banten.

Considering many areas in Java remain medium- to high-risk, epidemiologist Windhu Purnomo of Airlangga University (Unair) said it was important for all provinces on the island to impose the same restriction measures at the same time and with clearly defined law-enforcement guidelines.

Political parties have started to adopt a more flexible stance in regard to forming alliances nearing the simultaneous regional elections slated for December this year. For instance, the Golkar Party, which is part of the government coalition, and the Democratic Party, which is part of the opposition, have reportedly agreed to join hands in 33 out of 270 regencies or municipalities taking parts in this year’s election.

Golkar Sumatra executive Idris Laena said that while his party had been communicating with the Democratic Party, it had also been maintaining communication with other political parties in endorsing regional head candidates, such as those in West Sumatra and Riau Islands.

Airlangga said that in this year’s regional election, his party would not limit itself to collaborating with only political parties from the ruling coalition.

The Association for Elections and Democracy (Perludem) officially filed at the Constitutional Court on Thursday a judicial review request for Article 414 of the 2017 Elections Law on the parliamentary threshold. Perludem program manager Fadli Ramadhanil said the current parliamentary threshold could potentially lead to disproportionate election results.

Perludem deems the provision problematic, pointing out that it had frequently been contested throughout the years in the process of revising the law. The election watchdog added that all formulation processes related to the parliamentary threshold had not been held transparently.

Physical restrictions to prevent the spread of COVID-19 have resulted in the rise of virtual meetings, which have been embraced by lawmakers and officials despite the medium’s novelties and frustrations.

During the first phase of large-scale social restrictions (PSBB) in Jakarta, the seat of Indonesia’s central government, legislative meetings were forced to migrate online. As restrictions eased, House of Representatives sessions moved to a mix of virtual and physical meetings in a compromise to respect physical distancing measures.

Early in the PSBB period, digital House hearings tended toward chaos as lawmakers jostled with one another for a chance to speak during heated debates. The number of speakers made such meetings last for hours. One House hearing on state funding lasted about nine and a half hours. It dragged into the evening and had to be resumed the next day.

Besides limiting the flow of debate, online House hearings are notorious for limiting public participation in the deliberation of bills.

Over the course of the COVID-19 outbreak, lawmakers have passed two bills into law that have sparked outrage for their failure to consider public sentiment: Law No. 2/2020 on the COVID-19 response budget and a revision to the 2009 Mining Law.

The incentives that the government is offering, such as relaxation of the administration requirements for initial public offerings (IPO), appear to have been effective in stimulating corporate action. The Indonesia Stock Exchange (IDX) notes there are nine rights issue and five private placement plans in the pipeline. Furthermore, 28 issuers have done IPOs since the beginning of the year, higher than the first half of last year with only 17 IPOs.

According to Janson Nasrial, PT Kanaka Hita Solver research senior vice president, issuers would use the funds collected from the corporate actions to finish long-term projects and reduce dependence on debts. According to Janson, the United States’ Federal Reserve’s decision for US$4.5 billion in quantitative easing has increased liquidity in the market, improving capital flow to emerging markets such as Indonesia. He said that explained the high number of IPO.

In addition to the fund collections, mergers and acquisitions also took place during the COVID-19 pandemic as stock prices dropped. Among the acquisitions was the signing of a definitive agreement by Vale Canada and Sumitomo Metal Mining to sell 20 percent of PT Vale Indonesia shares to state-owned mining holding PT Inalum.

According to Praus Capital research head Alfred Nainggolan, merger and acquisition increased during the pandemic because valuation was low due to market pressure. However, Alfred also said investors should beware of the low valuation that was caused by diminishing future prospects.

The national economic recovery (PEN) stimulus disbursement and reopening of economic activities need to be accelerated in order for the country to avoid recession. The country’s economy is projected to contract 3.8 percent in the second quarter, before finally seeing positive growth in the third and fourth quarter this year.

President Joko “Jokowi” Widodo has called for the acceleration of the Rp 695.2 trillion (US$48.91 billion) PEN fund disbursement to stimulate the economy. During the plenary meeting on Jun. 18, he even went on to say that he would reshuffle the Cabinet if it did not perform well in addressing the COVID-19 pandemic. Jokowi told the ministers and institution heads to have a sense of urgency in dealing with the emergency.

Fiscal Policy Agency (BKF) head Febrio Nathan Kacaribu projected the economy would experience positive growth at around 0 percent in the third quarter and increase significantly at around 3 percent in the fourth quarter as some regions end the large-scale social restrictions (PSBB) and resume their economic activities.

Furthermore, Indonesia Chamber of Commerce and Industry (Kadin) deputy chairman of international relations Shinta Kamdani said the positive growth in the third quarter was a good signal, but she estimated that the real recovery would start next year.  She advised the government to control domestic demand and supply so that Indonesia could surpass the International Monetary Fund (IMF) economic projection of negative 0.3 percent this year.

Ombudsman member Ahmad Alamsyah Saragih has called for the improvement of the selection process for commissioners in state-owned enterprises (SOE). According to him, 397 commissioners held dual roles, in addition to the 167 who also hold positions in SOE subsidiaries. He said that commissioners holding dual roles could worsen SOEs’ governance and public service.

The Ombudsman found there are commissioners who remain active in ministries and non-ministerial institutions, such as the Indonesian Military (TNI), National Police and financial authorities or hold high-level positions in academic institutions such as universities.

Meanwhile, Law No. 25 on public service stipulates the management of public service organizations must come from the government. In addition, the TNI Law and National Police Law stipulate former officials are only allowed to hold civilian positions after resigning.

The Ombudsman’s records show that most dual roles are held by commissioners from ministries, with 254 individuals, or 64 percent. Meanwhile, 112 individuals are from non-ministerial institutions. Furthermore, 8 percent are from academic institutions.

The Tourism and Creative Economy Ministry’s marketing communication director Martini Mohammad Paham said the country’s tourism industry would be revived in three stages: emergency, recovery and normalization. Although other industries have reached the second and third stages, tourism is still in the emergency stage as the sector was hit the hardest by the COVID-19 pandemic.

The National Development Planning Agency (Bappenas) projects that the tourism sector would return to its normal, pre-pandemic condition in 2024. Martini added that people’s behavior in adapting to health protocols such as wearing masks and maintaining physical distance would help tourism progress to the recovery stage.

The agency’s industry, tourism and creative economy head Leonardo Teguh Sambodo said the tourism recovery also depended on COVID-19 mitigation measures in other countries that limit international travel. Therefore, the government would focus on domestic travel for the time being.

Borobudur tourism and institution director Bisma Jatmika said travel behavior would change during the pandemic. Tourists would prefer to stay in villas and private properties than hotels because they are looking for lodgings with limited numbers of visitors. Furthermore, business players would respond to people’s declining purchasing power by offering more affordable travel packages.

The share of Indonesians who say the economy has worsened over the past year has reached a record high.

Public opinion pollster Saiful Mujani Research and Consulting (SMRC) found that 92 percent of respondents surveyed from May 12 to 16 believe Indonesia’s economy is worse than in 2019. That number reflects the highest negative sentiment since the survey began in 2003, or five years into the Reform Era.

The highest previous spike of such sentiment was 58 percent in mid-2008, when the global financial crisis unfolded.

But the share of respondents with that bleak view slightly declined to 85 percent in the latest survey from June 18 to 20.

“We can say that Indonesians’ optimism is now in its worst shape,” Ade Armando, the director of communication at SMRC, said in a virtual briefing on Thursday. “Now that it has reached 85 percent, there is a sign of more optimism in June.”