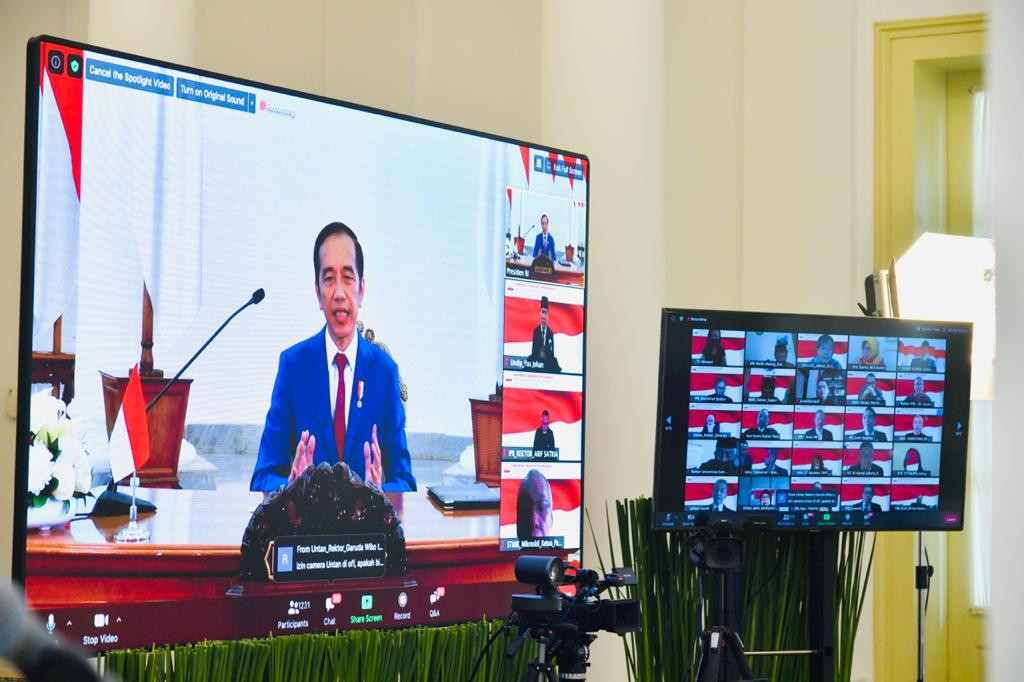 President Joko "Jokowi" Widodo has asked his ministers to prepare the country’s COVID-19 vaccination plan, especially in regard to public communication.

“[COVID-19 vaccination] is a very complex matter. Should this be communicated poorly, similar [objections] to those against the Job Creation Law can emerge,” the President said during a meeting earlier today.

Jokowi said that some information must be publicly disclosed, such as the prioritized recipients of the vaccine and who will get the vaccine for free.

Most residents want the large-scale social restrictions (PSBB), imposed to curb COVID-19 transmission, to end so the economy can be resumed, a survey by pollster Indikator Politik Indonesia shows.

The survey on COVID-19 mitigation related to economic interest and health, conducted from Sept. 24 involving 30 to 1,200 respondents in each of the 34 provinces, showed that 55 percent of respondents wanted the PSBB policy to be stopped to support the economy.

The poll revealed that 39 percent of respondents wanted the PSBB to be continued in order to tackle coronavirus transmission, the pollster executive director Burhanuddin Muhtadi said.

Burhanuddin said perception on PSBB implementation fluctuated between May and September, according to several surveys conducted by Indikator. He explained that the current figure contrasted with a similar survey in May, when 50.6 percent of respondents wanted the government to continue PSBB, while only 43.1 percent wanted the policy to be ended.

Indonesian Ulema Council (MUI) edict commission chair Hasanuddin AF said that the council would propose a fatwa to change the presidential term limit to a single seven- to eight-year term from the current two five-year terms.

Hasanuddin, however, said that such a proposal was currently being reviewed by the council to later be discussed during the MUI’s national congress slated for Nov. 25 to 28.

Bank Indonesia (BI) Governor Perry Warjiyo has said the purchase of government bonds under the burden sharing scheme – authorized under joint ministerial decree (SKB) II between BI and the Finance Ministry signed on July 7 – had reached Rp 229.68 trillion (US$15.6 billion) as of October 13. Meanwhile, BI’s purchases of government bonds on the primary market, as agreed in SKB I between BI and the Finance Ministry dated April 16, reached Rp 61.6 trillion. “In total, in SKB I and II, BI purchased Rp 291.3 trillion in government bonds on the primary market,” Perry said.

Finance Minister Sri Mulyani Indrawati has rejected the zero percent car tax proposal supported by the Industry Ministry. Sri Mulyani said fiscal incentives provided during the pandemic should support all industries and should not result in negative impacts on other sectors of the economy. Association of Indonesian Automotive Manufacturers (Gaikindo) secretary-general Kukuh Kumara told CNBC Indonesia that no official decision on the proposal had been made. “We do not work based on signal. For us, the important thing is certainty in policy decision-making,” Kukuh said.

The Finance Ministry has announced that Indonesia’s state budget deficit swelled to Rp 682.21 trillion (US$46.3 billion), or 4.16 percent of gross domestic product (GDP), in September, from 3.05 percent of GDP in the previous month. Finance Minister Sri Mulyani Indrawati said the increase was still within the range of the government’s target this year at 6.34 percent of GDP as stipulated by Presidential Regulation No. 72/2020. Meanwhile, state revenue realization reached Rp 1.16 quadrillion or 68.2 percent of the year’s target, and state expenditure was Rp 1.84 quadrillion or 67.2 percent of the target.

The Finance Ministry has announced a plan to revise 12 finance ministerial regulations (PMK) following the passage of the Job Creation Law by the House of Representatives. “There will be revision on 12 PMKs that regulate income tax, value-added tax and the general taxation system,” Taxation director general Suryo Utomo said. Besides revising 12 PMKs, the ministry will also issue two new government regulations, Suryo added.