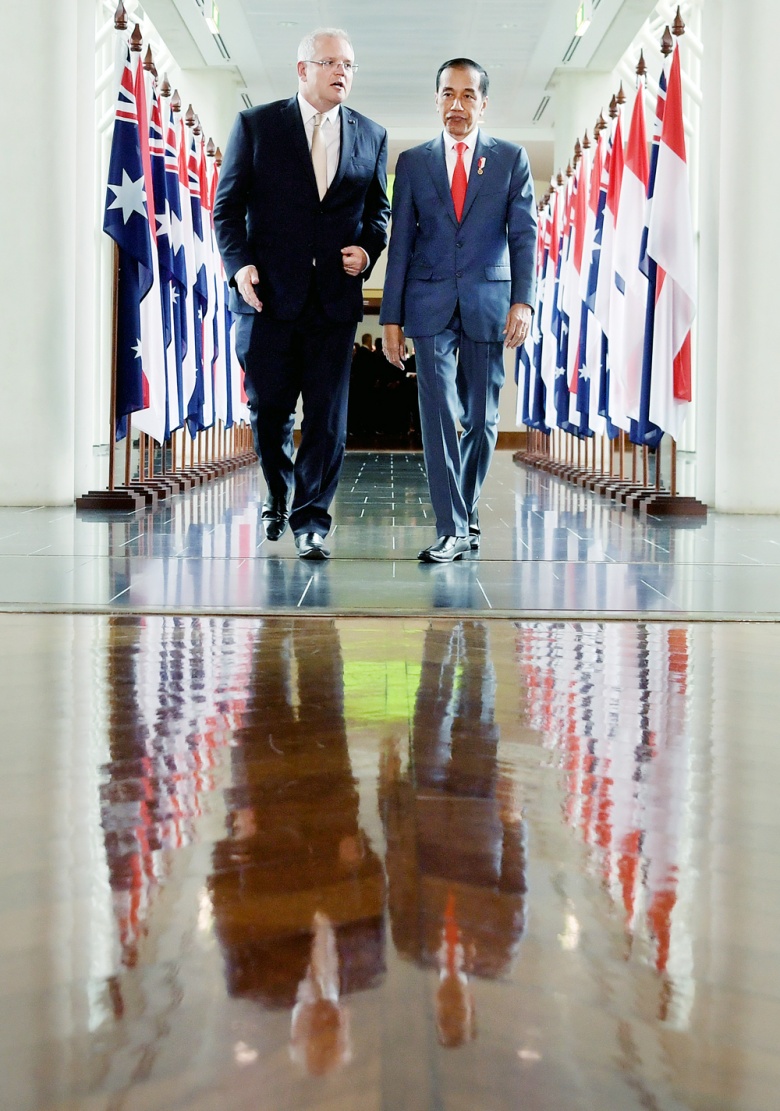 Drajad said the party did not have the right to join the government coalition, considering that PAN did not back the Joko “Jokowi” Widodo-Ma’ruf Amin ticket in the 2019 presidential election. “It is unethical and illogical. [You should be] ashamed if [you] ask for a post inside [the ruling coalition],” said Drajad, who also serves as deputy chairman of the party’s ethics council.

Meanwhile, a member of Zulkifli’s camp, Yandri Susanto, argued that the political system did not adopt the concept of opposition. PAN, therefore, will both support the government’s policies that benefit the people and criticize the policies that are contradictory to the party’s stance. Likewise, Mulfachri said his camp would be objective in evaluating the government’s performance. Whereas, Asman promised that PAN would maintain a good relationship with President Jokowi under his leadership.

The Indonesian Democratic Party of Struggle (PDI-P) has yet to decide which Surakarta mayoral candidate will receive its official backing for their mayoral bid in the 2020 regional elections. Both contending candidates, namely Gibran Rakabuming Raka and Achmad Purnomo, however, remain optimistic that they will get the blessing of PDI-P chairwoman Megawati Soekarnoputri.

Gibran, Achmad as well as the latter’s running mate, Teguh Prakosa, were screened on Monday at the PDI-P’s central executive board office, Jakarta.

PDI-P executive Puan Maharani said the party had given several recommendations regarding the 2020 regional elections. However, in the case of the Surakarta mayoral election, the party would need time to make a decision.

Amid uncertainties, Gibran affirmed that he would remain loyal to the PDI-P even if the party decided not to back his mayoral bid.

President Joko “Jokowi” Widodo became the second Indonesian leader to give a speech in a joint session of the Australian Parliament on Monday, almost a decade after his immediate predecessor gave a rousing speech about the neighbors’ great future together in the same forum.

Jokowi proposed four priority issues for Indonesia and Australia to work on together before they commemorated a century of diplomatic ties in 2050 — by which Jokowi predicted the two countries would be big players in both the Indo-Pacific region and the world.

But not everyone was immediately swayed by the positive overtures.

Foreign Policy Community of Indonesia founder Dino Patti Djalal said the challenge was how to ensure the economic agreement would boost trade and investment activities, considering the slow pace of similar initiatives Indonesia had led, such as the ASEAN Economic Community.

Separately, University of Indonesia international relations expert Evi Fitriani said Indonesian-Australian relations in recent years had been much warmer compared to the previous decade, owing mainly to the conclusion of the IA-CEPA, the formulation of which started in 2010.

“The central [government] should not be too suspicious of regional heads. Especially in this era of transparency, we [regional heads] would not dare do anything,” said Nikson.

Another regional head, namely Malang Mayor Sutiaji, said he could not comment on the matter because he did not understand the substance of the omnibus bill itself. Whereas, Malang Regent Sanusi said he did not even know what an omnibus bill was.

House of Representatives Speaker Puan Maharani has expressed hope that the government will keep the House and the public in the loop regarding a number of omnibus bills it is drafting.

“What justifies a deputy minister’s ‘double job’, since almost all deputy ministers are also serving as a commissioner in other state institutions?” said Constitutional Court Justice Saldi Isra.

According to the 2019 Southeast Asia Tech Investment report by Cento Ventures,  total investment in start-up firms in Indonesia reached US$9.42 billion in 2014 – 2019. However, investors had only gained $1.29 billion from their exits, leading to 0.1x liquidity ratio, which is among the lowest in Southeast Asia.

Meanwhile, the highest investment liquidity ratio was gained by Malaysia with 2.2x. With total investment of $673 million in the same period, investors earned $1.46 billion when they exited Malaysian start-up companies.

Venture Capital and Start-up Indonesia Association (Amvesindo) treasurer Edward Ismawan Chamdani said the liquidity ratio was low in Indonesia because the start-up company ecosystem was still growing, therefore the cash value received by investors had not matured yet.

Edward recommends the government create investment products suitable for start-up companies, establish a legal basis for venture capital funding, as well as encourage start-up company management to sell their shares to the public.

However, East Ventures cofounder and managing partner Wilson Cuaca does not see low liquidity ratio as an issue. According to Wilson, it demonstrates investors’ long-term approach. He said investors were focusing on increasing the company’s value and would exit at the right time. When the time comes, Wilson believes Indonesia’s liquidity ratio will be higher than that of Malaysia.

Bank Indonesia (BI) recorded a US$4.7 billion surplus in the country’s balance of payment in 2019, a significant improvement from the $7.1 billion deficit in 2018. The progress was a result of a shrinking current account deficit, as well as increasing capital and financial transactions, which demonstrates the country’s economic resilience amid external challenges.

BI recorded the current account deficit at $30.4 billion or 2.72 percent of gross domestic product (GDP) in 2019, an improvement from 2.94 percent in 2018. The government’s policy to lower oil imports and increase non-oil and gas exports led to a surplus in the trade balance in 2019, which was in deficit in the previous year. The trade balance surplus contributed to shrinking the current account deficit.

In addition, capital and financial transactions also increased from $25.2 billion in 2018 to $36.3 in 2019. By the end of 2019, foreign exchange reserves reached $129.2 billion, equal to 7.8 months of imports or 7.3 months of imports and government foreign debt payments, more than twice the international adequacy standard of around three months of imports.

The central bank projects the balance of payment to keep on improving since the current account deficit is estimated to remain within 2.5 to 3.0 percent of GDP.  In addition, capital inflow is also estimated to continue with investors having a positive perception of Indonesia’s economy.

From automotive and textiles to education and energy services, Indonesia seeks to expand market access and attract investment from Australia through the new Indonesia-Australia Comprehensive Economic Partnership Agreement (IA-CEPA).

According to a document posted on Australia’s Department of Foreign Affairs and Trade website, the trade deal is intended to eliminate all remaining tariffs on main Indonesian imports into Australia and ease the requirements for Indonesian electric motor vehicles to enter the Australian market.

In return, more than 99 percent of Australian exports by value can enter into Indonesia duty free or under significantly improved preferential arrangements by 2020. The products include live male cattle, frozen beef, mutton, dairy products, sugar, citrus and hot and cold rolled steel coil, among others.

Australia imported $2.11 billion worth of Indonesian products, 1.36 percent of the latter’s total non-oil-and-gas exports, throughout 2019. On the other hand, Australia shipped $4.67 billion worth of commodities to Indonesia, resulting in a trade deficit of $2.56 billion on Indonesia’s side.

The Jakarta Composite Index (JCI) weakened 0.79 percent to 5,952.08 at the beginning of the week. Since the beginning of the year, the JCI has dropped by 5.52 percent. Despite the challenging situation, analysts advised investors not to worry since this could be an opportunity to buy shares at a low price.

The JCI’s price-to-earning ratio (PER) has fallen from 20 times at the beginning of the year to currently 18 times. However, it remains one of the strongest among the indexes in the Asian region, coming in at fifth only after Malaysia, India, Japan and South Korea.

Astronacci International Sekuritas president director Gema Goeyardi said a normal JCI level was 6,200 to 6,300, therefore the index still had a high chance to improve. Sharing the same sentiment, Infovesta Utama head of investment research Wawan Hendrayana said the index was likely to rebound at the end of February when issuers released their financial reports.

Bulog has been buying less rice from farmers in the last four years, especially when the food subsidy scheme changed and disconnected the upstream and downstream sides of rice production and distribution.

Statistics Indonesia (BPS) recorded millions of cases, in which grains were sold under the HPP in the March – June 2019 harvest period. Now, farmers in West Java, Central Java, Yogyakarta and South Sulawesi are also worried the same thing could happen during the harvest period in March – May this year.

Furthermore, the government has yet to adjust the HPP, which for dry grains remains at Rp 3,700 per kilogram, while the production price is Rp 4,523 per kg, according to an AB2TI survey.