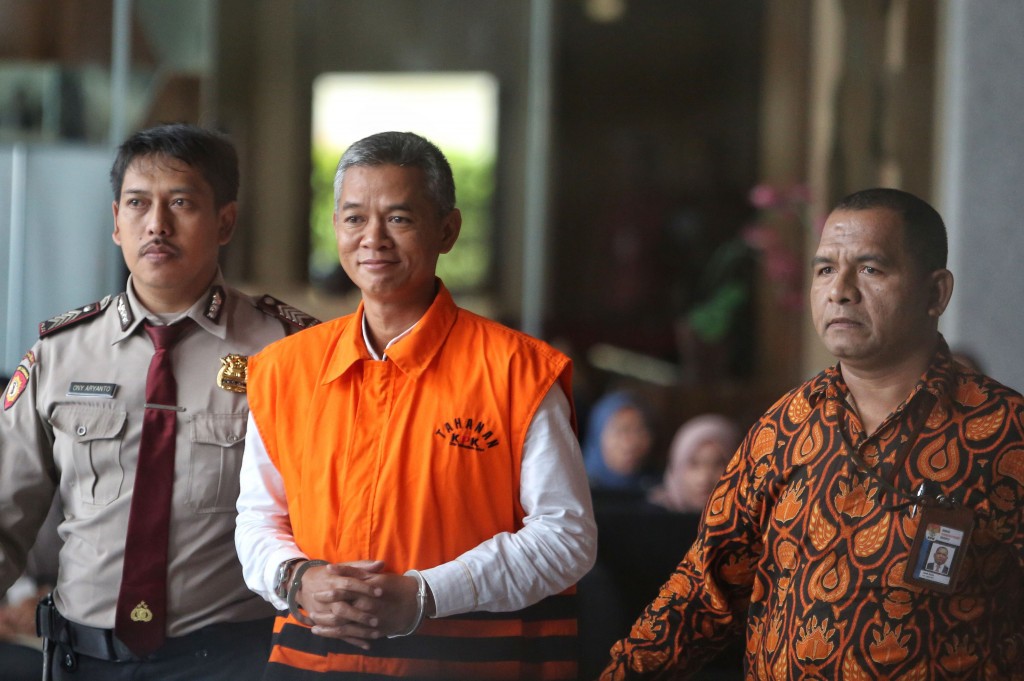 While having a discussion on live television regarding the Corruption Eradication Commission’s (KPK) recent attempt to search the Indonesian Democratic Party of Struggle’s (PDI-P) headquarters in Central Jakarta, PDI-P lawmaker Masinton Pasaribu showed a Sprindik (letter ordering the start of an investigation) for a bribery case involving General Elections Commission (KPU) commissioner Wahyu Setiawan and several PDI-P members. The Sprindik, which was reportedly signed by former KPK chairman Agus Rahardjo, sparked speculation about the PDI-P’s close relationship with the antigraft body, as the Sprindik was supposed to be confidential and not disclosed to those outside the KPK.

Masinton said he received the supposedly confidential document from a person by the name of Novel Yudi Harahap. The authenticity of the letter, however, is still in question. Acting KPK spokesperson Ali Fikri said his party had never given such a letter to anyone.

The Freedom of Information Network Indonesia (FOINI) coalition urged the KPK to find out how the Sprindik was leaked to external individuals. FOINI official Hendrik Rosdinar said that, according to Law No. 14/2008 on Public Information, Masinton’s recent move could be considered as an effort to hamper the KPK’s investigation process.

The station has been embroiled in a controversy following the dismissal of its former chief director, Helmy Yahya. Helmy was dismissed yesterday by the TVRI supervisory council as a result of his inability to justify his decision to pay the exorbitant cost of English Premier League broadcast rights.

The House will reportedly summon the TVRI supervisory council next week to further question its decision to dismiss Helmy.

Attorney General ST Burhanuddin stated that the 1998 shooting incidents in Semanggi, during which a number of university students were shot and killed by security personnel, were not major human rights violation cases. Burhanuddin’s statement, which was made during his meeting with House of Representatives Commission III, has put the figure in hot water as criticisms against the statement mounted.

National Commission on Human Rights (Komnas HAM) commissioner Choirul Anam, for one, has lambasted the attorney general, saying that his statement was not in line with President Joko “Jokowi” Widodo’s previous promise on solving past major human rights violation cases.

The Presidential Palace has assigned Coordinating Political, Legal and Security Affairs Minister Mahfud MD to address the situation and issue an official statement, as affirmed by presidential spokesman Fadjroel Rachman.

It remains unclear whether Mahfud, Tito, Khofifah and Emil had a meeting at the same time or separately.

The Financial Services Authority (OJK) and Indonesia Stock Exchange (IDX) are drafting a regulation to oversee brokerage companies in the stock market in a bid to prevent stock market manipulation, which usually occurs when the broker made a bogus over-the-counter transaction. OJK chairman Wimboh Santoso said on Thursday that the authorities would refer to similar regulations in other countries, namely Singapore and the US, in formulating the regulation.

Global oil prices remained steady on Friday morning following the release of China’s gross domestic product (GDP) for last year and the trade deal between the United States and China. International benchmark price Brent slightly declined by 0.02 percent to US$64.61 a barrel this morning, while West Texas Intermediate (WTI) rose to $58.53 a barrel, a 0.02 percent increase.

China’s economy rose by 6.1 percent last year, in line with analysts' expectations surveyed by Reuters. Despite China’s relatively strong economic growth, uncertainty over the oil price has since remained as the phase one trade deal only cuts tariffs from 15 percent to 7.5 percent on $112 billion of Chinese imports, while another $250 billion worth of import goods are still subject to a 25 percent tariff.

The government has confirmed that there will be no electricity tariff hike this year despite the tariff adjustment calculation suggesting otherwise. According to regulations, electricity tariffs should be adjusted every three months referring to changes in exchange rate, inflation rate and the Indonesian crude price (ICP). The government has maintained electricity prices at the current level considering people’s low purchasing power as well as to support industry growth. This decision means that the government has to compensate for increased production costs of state-owned electricity company PLN to make up for the price difference.

However, the government plans to update the current tariff adjustment road map, aligning the formula with several new parameters including people’s purchasing power. The road map breaks down into three stages: the implementation, considerations for implementation or delay, and actions if the tariff adjustment is delayed or not implemented, explained Energy and Mineral Resources Ministry electricity supervision director general Hendra Iswahyudi.

Tech giant Microsoft plans to establish a data center with investment worth US$1 billion in Indonesia, as announced by Coordinating Maritime Affairs and Investment Minister Luhut Pandjaitan after a meeting with the company’s representatives this morning. Prior to this, US-based internet giant Google had also planned to launch its cloud-computing business in the country this year. In the past three years, the tech company has invested in over 20 data centers around the world with an investment value of US$47 billion in total, equal to Rp 663 trillion with an exchange rate assumption of Rp 14,000 per US dollar.