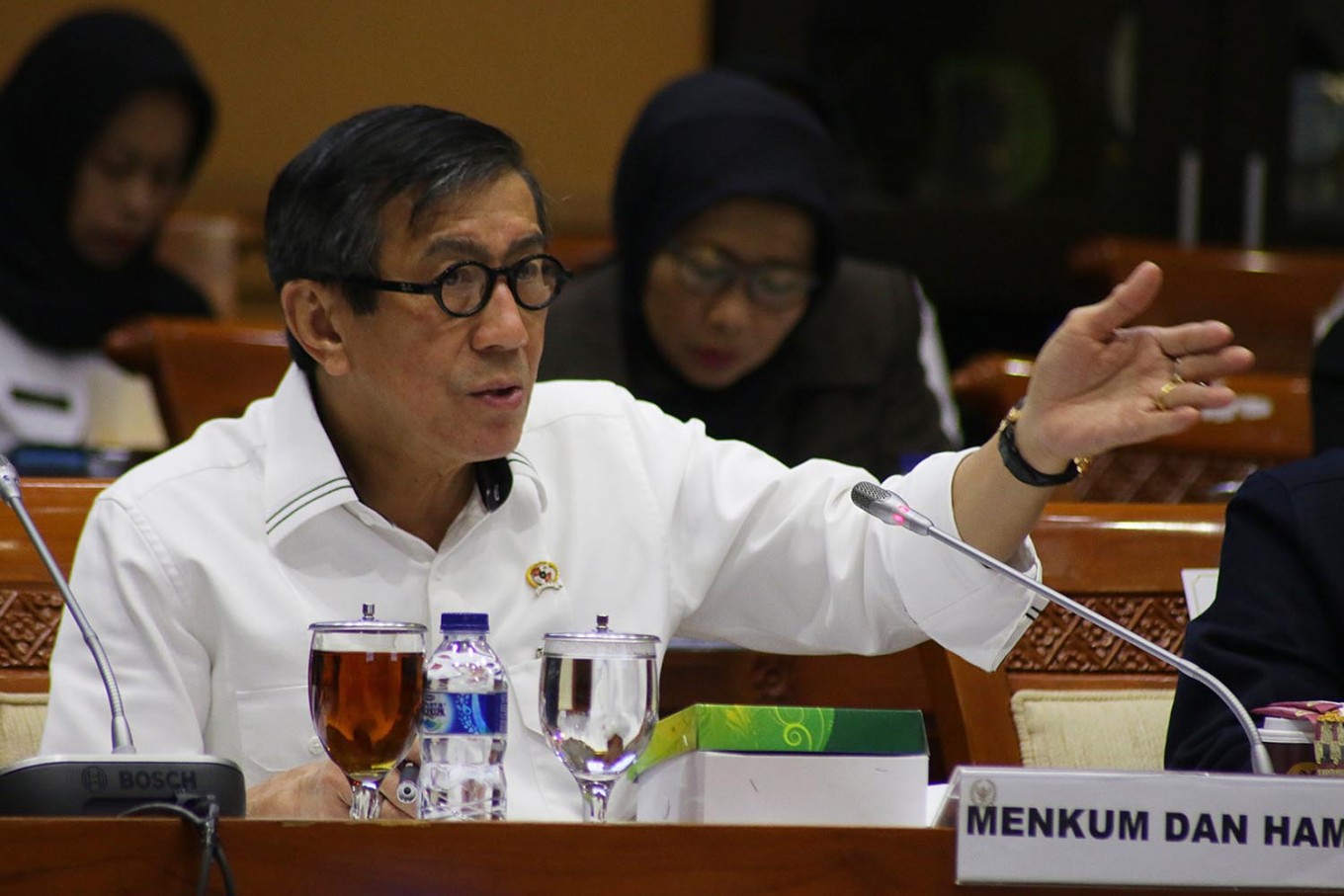 Two of the highlights of the report are the increased number of female legislative candidates and the overall voters in Indonesia. Arief said that in the 2019 elections, the number of voters increased to 82 percent from 75 percent, which was higher than the national target of 77.5 percent.

Arief further added that other than submitting the report, the KPU also held a discussion with Jokowi regarding two other subjects, namely preparations for the 2020 simultaneous regional elections and the commission’s internal administrative matters.

Coordinating Political, Legal and Security Affairs Minister Mahfud MD, who was also present in the meeting, said the reported plan to change the current system of direct regional elections would be discussed at another time. He also said the government had yet to decide its stance regarding the plan and said that all input and evaluations would be considered.


KPK to summon minister Yasonna’s son in bribery investigation
CNN Indonesia (https://tinyurl.com/s3gxp77); Detik (https://tinyurl.com/qqgpw5k)
The Corruption Eradication Commission (KPK) has reportedly set a schedule to question the son of Law and Human Rights Minister Yasonna Laoly, Yamitema Tirtajaya Laoly. Yamitema will be summoned as a witness in the KPK’s investigation into alleged bribery involving non-active Medan mayor Tengku Dzulmi Eldin. Yamitema will be questioned in his capacity as the director of PT Kani Jaya Sentosa, which has on several occasions in the past won tenders from the Medan administration.

“He [Yemitema] will be questioned as a witness for [the KPK’s investigation into the involvement of] the head of the Medan administration’s public works agency, Isa Ansyari,” KPK spokesperson Chrystelina GS said earlier today.


Prabowo reasserts Indonesia’s defense doctrine
Tempo (https://tinyurl.com/vk2dd8v); Detik (https://tinyurl.com/ucwls7k)
During a working meeting with the House of Representatives Commission I overseeing defense and foreign affairs, Defense Minister Prabowo Subianto asserted that Indonesia had to construct its defense and security outlook. “We [Defense Ministry] will reevaluate the country’s security and defense outlook. Indonesia’s stance on defense is not offensive, but defensive,” said Prabowo. Prabowo asserted that Indonesia would not disturb other countries. The former military general, however, added that Indonesia would not remain silent if it was threatened by other countries.

Ahead of the meeting, Prabowo said that he and Deputy Defense Minister Wahyu Sakti Trenggono had yet to draft the Defense Ministry’s official plan. “We are currently gathering data, information and input to identify the problems in Indonesia’s defense sector. Then we will draft the plan to address them,” said Prabowo.
.
BUSINESS AND ECONOMICS NEWS AND HEADLINES
JCI down 0.6 percent in morning session
CNBC Indonesia, (https://tinyurl.com/vpfzx6n); Kontan, (https://tinyurl.com/ql68a78); IDN Financials, (https://tinyurl.com/ufvprz4); Investor Daily, (https://tinyurl.com/uz7c9fr)
The Jakarta Composite Index (JCI) was down 0.6 percent, ending Monday’s morning session at 6,141.02. Similarly, stock markets in various Asian countries headed south. For instance, Japan’s Nikkei was down 0.2 percent, Singapore’s Strait Times and South Korea’s Kospi 0.48 percent, China’s Shanghai 1.22 percent and Hong Kong’s Hangseng 2.1 percent.

This morning, bandwidth utilization reached 2 gigabytes. In response to high public enthusiasm, the BKN asked state-owned telecommunication company Telkom Indonesia to increase bandwidth capacity to 5 GB. In addition, the BKN split the web portal for information service, FAQ, helpdesk and login into five servers anticipating a slowdown in page load time. If the BKN’s data storage capacity reaches 50 to 60 percent, the capacity will be upgraded to 5 terabytes.


BCA CEO: Beware of fintech lending NPL
CNBC Indonesia, (https://tinyurl.com/w9uzm7w)
Indonesia has the fastest growing digital economy in Southeast Asia. According to a study by Google, Temasek and Bain & Co., Indonesia’s digital sector will be valued at US$100 billion by the end of the year.

One of the digital sector’s main drivers is peer-to-peer (P2P) lending. Year-to-date, the amount of loans disbursed has grown by 102 percent to Rp 10 trillion ($713.4 billion), and the number of borrowers by 229 percent to 14 million people.

“Financial technology is growing fast but [everyone should] be aware of their credit quality,” Bank Central Asia (BCA) president director Jahja Setiaatmadja said during the Indonesia Banking Expo today. Fintech’s non-performing loan (NPL) has grown rapidly. In December 2018, the NPL stood at 1.45 percent, but on Sept it doubled to 2.89 percent – or equal to Rp 28.9 billion in value.

Makati City Rep. Luis Campos Jr. hailed on Sunday the entry of a new transport network company, Gojek, to restore competition and provide another option for commuters on the clogged streets of the capital, following Grab’s acquisition of Uber’s Southeast Asia operations. Gojek co-chief executive officer Andre Soelistyo said last week that the tech giant was ready to begin operations in the Philippines by 2020. In January, the Land Transportation Franchising and Regulatory Board rejected Gojek’s application over foreign ownership issues.