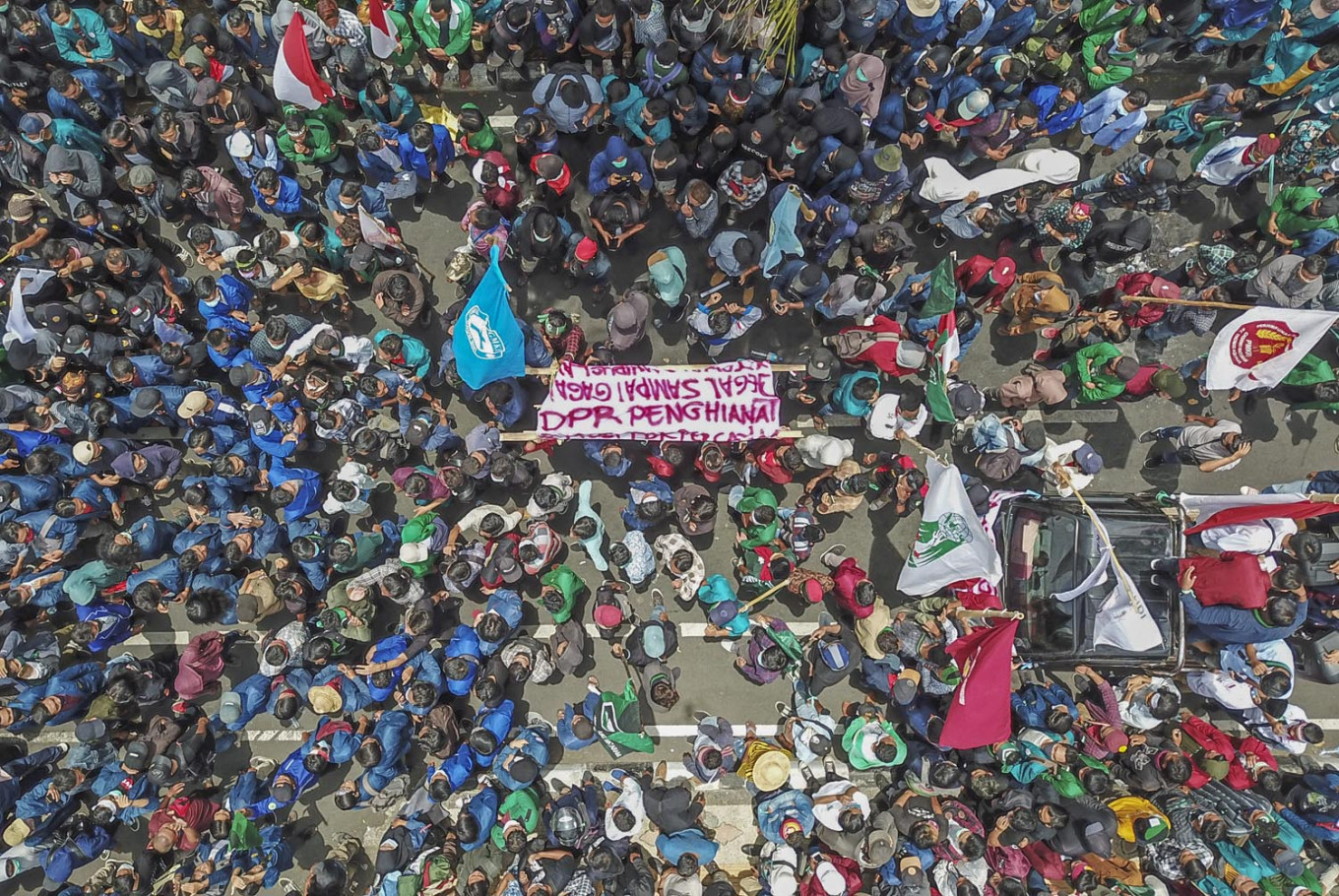 The Confederation of Indonesian Workers Union (KSPI) announced that it would call off mass strikes in its protest against the contentious Job Creation Law. KSPI chairman Said Iqbal said the union would take the legal route in its next step, namely filing a request for a judicial review on the omnibus law at the Constitutional Court.

“Our next step will be constitutional in nature, namely through a judicial review challenging the omnibus law as well as campaigning on the reasons behind the labor force’s opposition to the law at the national and international levels,” said Said in a written statement.

Previously, the KSPI and 32 other labor unions chose to stage nationwide strikes from Oct. 6 to Oct. 8 following the passing of the Job Creation Law. The government has lambasted the large demonstrations against the law, which took place over recent days in numerous regions. The government urged demonstrators to file a judicial review at the Constitutional Court to convey their dissatisfaction with the law.

Nahdlatul Ulama (NU), Indonesia’s largest Islamic mass organization, and the Indonesian Ulema Council (MUI) have both reasserted their opposition to the Job Creation Law. The MUI, for one, has issued an edict declaring its support for individuals and groups who opposed the omnibus law and planned to file for a judicial review on the law at the Constitutional Court. The MUI further urged the government to accommodate public aspirations regarding the contentious law.

Similarly, NU has also condemned the recent legislation of the omnibus bill and pledged its support for a judicial review. NU chairman Said Aqil Siradj has stated that the recently passed Job Creation Law was oppressive and benefited only the rich.

“[The law] only benefits tycoons, capitalists and investors but tramples on the interests of laborers, farmers and the lower classes,” Said said in a video uploaded to NU’s official YouTube account. “Within the omnibus law, education [institutions], for example, are treated as if they are companies. This is wrong,” he added.

Said called for a tasawuth (moderate and balanced) solution in the form of a judicial review.  “Our stance is critical [against the omnibus law] but let’s do it in an elegant way and without violence,” he said. “We demand a [judicial] review.”

National COVID-19 task force spokesman Wiku Adisasmito has said that having vaccines for the virus does not solely guarantee the end of the pandemic in the country. “Vaccines are not the only reassurance for the country to eliminate the COVID-19 pandemic,” Wiku said in a virtual press conference in Jakarta on Thursday.

He went on to say that vaccines were to only serve as a form of medical intervention to boost people’s immunity during the pandemic. Therefore, once the country had vaccines, people were expected to support the vaccination program by continuing to comply with handwashing, mask-wearing and physical distancing rules, he added. The said three activities are believed to be effective in curbing the virus spread.

In a separate event, another task force spokesperson, Reisa Broto Asmoro, said people needn't be worried about the possible side effects of the future vaccines.  Reisa referred to a certain belief surrounding vaccines causing autism. “Let’s not be worried about illnesses that have nothing to do with immunization,” she added.

President Joko “Jokowi” Widodo signed the much-anticipated regulation on COVID-19 vaccines and vaccination on Monday. Presidential Regulation No. 99/2020 on vaccine procurement and vaccination to mitigate the COVID-19 pandemic came into effect on Tuesday.

The aforementioned presidential regulation breaks down requirements for the procurement, implementation, funding and support and facilities from ministries, institutions and regional administrations concerning COVID-19 vaccination. According to the regulation, frontline workers, from health workers and contact-tracing paramedics to military and law enforcement personnel, will be prioritized for vaccination. They number some 3.5 million people.

Nine cinemas reopened today following the Bandung administration’s decision to relax restrictions. Bandung Tourism and Culture Agency tourism department head Edward Parlindungan said the city administration had issued Mayoral Decree (perwali) No. 46/2020 to facilitate the reopening of cinemas. Six of the reopened cinemas are owned by CGV Cinemas, two by Cinema XXI, and one by Cinemax. Cinema capacity will be limited to 50 percent.

Transportation Minister Budi Karya Sumadi inaugurated the southern Java double track railway network on Thursday for partial service. The network seeks to boost connectivity between Cirebon, West Java, and Surabaya, East Java. Some 550 kilometres of the railway network, connecting Cirebon and Jombang, East Java, are ready to use. The ministry aims to finish building the remaining part of the track, about 65 km connecting Jombang and Wonokromo, East Java, in the next two years. “With the completion of the southern Java double track railway, we will connect three big city agglomerations, namely Greater Jakarta, Joglosemar [Yogyakarta, Surakarta, and Semarang] and Gerbangkertosusila [the Surabaya metropolitan area],” Budi said.