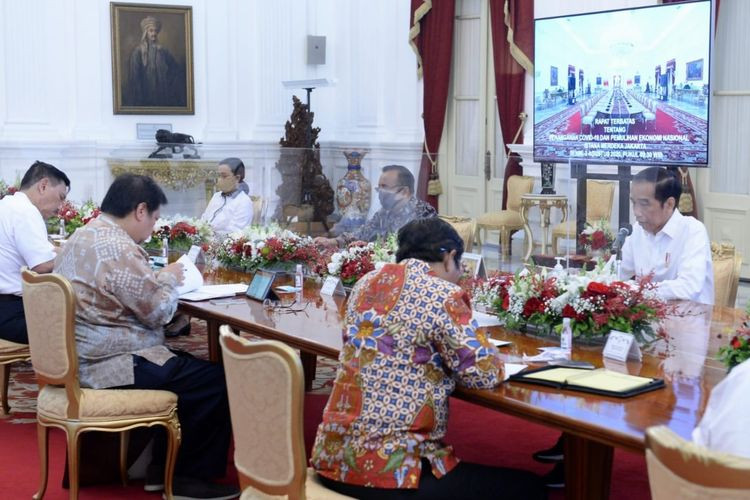 During a Cabinet meeting on Monday, President Joko “Jokowi” Widodo has urged regional administrations to implement local-scale social restrictions to contain COVID-19 transmission, instead of large-scale ones. “So that [measures against] COVID-19 can be more detailed and focused,” Jokowi argued.

Jokowi went on to say that each neighborhood unit or village in a certain region might need different treatment as they experience a different level of crisis. “Don't rush in shutting down a city, regency or certain area. We have to move based on data to make a more effective policy,” Jokowi said.

Following the Cabinet meeting, Coordinating Economic Minister Airlangga Hartarto said that the President had instructed central and regional governments to coordinate well before issuing a policy.

Previously, the Jakarta administration announced the decision to reinstate the large-scale social restrictions (PSBB) for the next two weeks due to the spike in new COVID-19 cases and the high percentage of occupied hospital beds in the capital.

Jakarta entered another period of large-scale social restrictions (PSBB) on Monday with most office workers forced to once again shelter in place, but some remain unconvinced that the curbs will contribute much to their protection — unless there is enforcement.

The Jakarta Manpower, Transmigration and Energy Agency recorded that 4,074 companies and institutions — which together employed a total of 1.07 million workers — had either enforced the work-from-home policy or slimmed down their operations. But it remains unclear how many workers were actually working remotely during that period.

With the return to the PSBB, agency head Andri Yansyah estimates that there could be over 600,000 employees still working in their office spaces. The agency said Jakarta had nearly 80,000 companies and institutions in total, together employing some 2.1 million people.

Deputy National Police chief Comr. Gen. Gatot Eddy Pramono said the proposed move was due to the limited number of police and Indonesian Military (TNI) personnel. The assistance of community and gang leaders, he argued, was needed as part of the efforts to discipline the public amid the ongoing pandemic, especially regarding mask-wearing and physical distancing measures.

In Indonesia, local gangs are linked to security in areas such as traditional markets and parking spots, which they “protect” in exchange for money.

Gatot, who also serves as deputy chief executive of the country’s COVID-19 handling committee, said that, in addition to gangs, other community groups would be involved, such as ojek (motorcycle taxi) groups and hobby-based communities, such as motorcycle enthusiasts.

In the hearing, he also asserted that the police and the TNI would supervise them, so that they did not violate human rights.

The Attorney General's Office (AGO) has yet to probe deeper into the possible involvement of former Supreme Court chief justice Hatta Ali in the high-profile Bank Bali corruption case involving Djoko Soegiarto Tjandra.

AGO spokesman Hari Setiyono said the investigating team had yet to find enough evidence to probe Hatta’s documents.

Hatta’s name and alleged involvement first emerged in the proposal to acquit Djoko and overturn the court's decision from 2009 that declared the latter guilty of involvement in the Bank Bali corruption case. The proposal, according to Tempo magazine, was signed by prosecutor Pinangki Sirna Malasari, NasDem politician Andi Irfan Jaya and Djoko’s lawyer Anita Kolopaking. All three of them have been named suspects by the AGO.

The Attorney General's Office (AGO) has proposed a Rp 400 billion budget to renovate its headquarters in Kebayoran Baru, South Jakarta, following a fire that engulfed its main building last month.

Deputy Attorney General Setia Untung Arimuladi said during a hearing with House of Representatives Commission III on Monday that the damage had disrupted the AGO’s work.

"The AGO requests that Commission III support and approve the additional Rp 400 billion for [its] 2021 budget to finance the reconstruction of our main building," he said.

A number of AGO staff had been temporarily relocated to the AGO’s training center buildings in Ragunan, South Jakarta and Ceger, East Jakarta to do their daily duties, Setia added.

The Indonesian stock market rebounded on Monday, the first day of the reinstatement of large-scale social restrictions (PSBB) to contain COVID-19 in Jakarta and after a market crash last week, as investor optimism was restored as a result of the limited impact of the measures on businesses.

The Jakarta Composite Index (JCI), the main gauge of the Indonesia Stock Exchange (IDX), climbed by 2.89 percent to 5,161.82 against the previous trading day, continuing last Friday’s rally of 2.56 percent.

The market uptrend offset the dramatic plunge of 5.01 percent last Thursday to 4,891.46, the lowest since March, which led to a half-hour trading halt as investors engaged in a panic sell-off. The market crash was sparked by the initial announcement of the reintroduction of PSBB measures amid the continuous rise in COVID-19 cases.

In a Mirae Asset Sekuritas report published on Monday, cowritten by Hariyanto and analyst Emma A. Fauni, both researchers stated that the impact of the PSBB policy on earnings per share (EPS) should be less severe than expected, as non-essential businesses are still allowed to operate, despite limitations.

Some banks have limited the distribution of personal loans — or unsecured loans (KTA) —due to their high-risk potential, especially during the COVID-19 pandemic. The loans are now only given to state civil service (ASN) personnel and customers on payroll.

Several private lenders have seen a decline in the personal loan segment of their loan portfolio. Bank Central Asia’s (BCA) portfolio in the segment has fallen 2.7 percent year-on-year (yoy), while CIMB Niaga saw a 4.5 percent yoy decline. CIMB Niaga is now limiting personal distribution only to customers on payroll and their credit card customers.

Banks are also assessing debtors’ workplaces to avoid potential bankruptcy, which would affect the customers’ ability to pay back their loans.

The government is planning to regulate the price for COVID-19 swab tests conducted by private hospitals as concerns have been raised over high prices. Hospitals currently charge up to Rp 2.5 million (US$167.52) per test and higher if patients want to get their results immediate.

Private hospitals claim they charge high prices for swab tests because of the high investment costs they have to bear. According to the Indonesian Private Hospital Association (ARSSI) secretary-general Ichsan Hanafi, a polymerase chain reaction (PCR) machine alone could cost billions of rupiah, and that excludes the cost of purchasing reagents, building a negative-pressured room and paying the salary of medical workers.

The National Disaster Mitigation Agency (BNPB) said a swab test in Indonesia should cost around Rp 500,000. Indonesian Doctors Association (IDI) deputy chairman Slamet Budiarto questions the calculation because the reagent itself could cost Rp 900,000 per test. He said the government should regulate the price of reagents instead because hospitals never knew how much the reagent should cost. The government is planning to gather all stakeholders to regulate the price for swab tests in Indonesia.

The high prices are also due to a regulation that forbids hospitals from directly importing healthcare equipment and reagents, which can only be imported by licensed companies that would then add operational, storage and customs fees to the cost.

University of Indonesia epidemiologist Pandu Riono said that prices are high because hospitals tend to offer test packages that include a swab test, blood check, X-rays, doctor consultation and other services. The government should follow the example of other countries and subsidize swab tests for the public, he added.

There is still time for economic recovery
Investor Daily, headline

President Joko “Jokowi” Widodo is optimistic that the national economy still has time to recover and avoid a recession. Therefore, the government will continue to optimize health care treatments, bolster people’s purchasing power to improve household spending, as well as boost budget spending for ministries/institutions and regional governments as a part of the national economic recovery (PEN) program.

Jokowi expects gross domestic product (GDP) in the third quarter to be close to positive so that Indonesia would be free from the economic crisis. The country’s economy contracted by 5.32 percent year-on-year (yoy) in the second quarter after growing only 2.97 percent in the first. The President highlighted the importance of accelerating incentive programs in the cash transfer category to achieve this target.

Airlangga also said that President Jokowi had ordered better coordination with local governments for COVID-19 mitigation efforts. In the next two weeks, the government will focus on mitigating COVID-19 in eight highly impacted regions.

Health Minister Terawan Agus Putranto added that for COVID-19 mitigation, the government would work together with hotel groups such as Hotel Accor, Novotel, Ibis, as well as Tauzia Group, to provide more isolation rooms for mild-symptom and asymptomatic patients in 15 to 30 hotels.

The reinstatement of large-scale social restrictions (PSBB) in Jakarta from Sept. 14 to 27 has raised concerns over further layoffs, with businesses urging the government to optimize the disbursement of stimulus packages so that they can help their employees.

Indonesian Retailers Association (Aprindo) chairman Roy Mandey said on the first day of the first PSBB period back in April that shopping centers had lost half of their visitors. When the PSBB was relaxed, the number went down to 35 percent. When PSBB measures were reintroduced on Monday, the number fell to 10 to 15 percent, with only 5 percent actually making purchases.

Roy said stimulus for businesses is urgently needed to help them maintain healthy cashflows and prevent labor issues. He questioned the government’s commitment to distributing Rp 100 trillion in corporate credit stimuli through 15 banks because distribution is still minimum and had not reached all sectors, including retail.

The stimulus offered to businesses so far include tax relaxations, income tax postponements, the Health Care and Social Security Agency (BPJS Kesehatan) and Workers Social Security Agency (BPJS Ketenagakerjaan) premium payment relaxation, as well as wage subsidies for workers with salaries below Rp 5 million (US$336.54). However, the impact for businesses has not been significant; only around 10 percent of retailers’ cashflow.