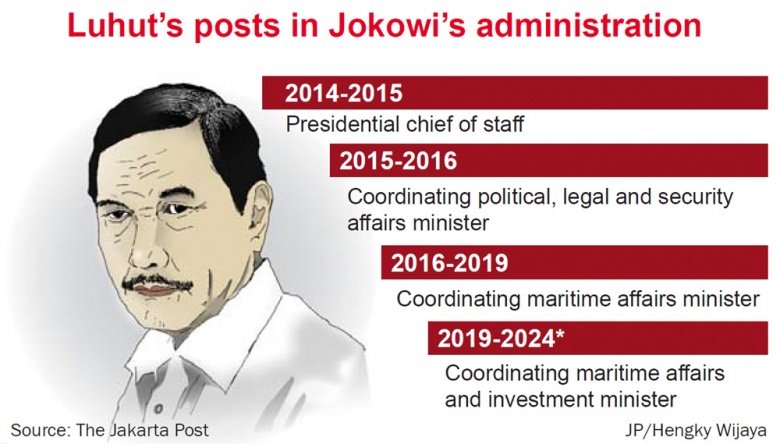 President Joko "Jokowi" Widodo's decision to give additional authority to Coordinating Maritime Affairs and Investment Minister Luhut Pandjaitan is expected to speed up infrastructure projects and fund-raising efforts at a time when weak investment is weighing on economic growth.

Presidential Regulation (Perpres) No. 71/2019, signed on Oct. 24, expands Luhut's coordinating role to encompass the Public Works and Housing Ministry, the Environment and Forestry Ministry and the Investment Coordinating Board (BKPM), all of which were previously the responsibility of Coordinating Economic Minister Airlangga Hartarto. The new regulation replaces a 2015 Perpres on the Office of the Coordinating Maritime Affairs Minister.

President Joko "Jokowi" Widodo has asked the Golkar Party to avoid internal conflict ahead of its congress to elect its chairman next month. The party executives who assume Cabinet posts also need to remain steadfast in  performing their duties amid the global economic turmoil.

With the party congress drawing near, tension within the party has heated up after People's Consultative Assembly Speaker Bambang Soesatyo decided to challenge the incumbent, Airlangga Hartarto, the coordinating economics minister, in the race for the chairmanship. Both the contenders have ensured their competition would not split the party.

Jokowi said Golkar formed the backbone of his government, therefore the party’s solidity mattered to him. “Any little shock in the party will affect the government,” Jokowi said during Golkar’s anniversary celebration on Wednesday.

The NasDem Party, currently the nation's fourth-largest party, will hold its second national congress in Jakarta over the weekend, but most of the attention will be on the figure it has chosen to open it: Jakarta Governor Anies Baswedan.

The party has claimed that there is nothing political about inviting Anies to its congress, but given the party's maneuverings after the April legislative and presidential elections, speculation is rife that party leader Surya Paloh - a veteran politician with a strong media network - is preparing a grand strategy for 2024, with the Jakarta governor as one of its potential presidential candidates.

Paloh, analysts say, is toying with the idea of building a new political axis with the opposition parties to take on the nation's two biggest parties: the Indonesian Democratic Party of Struggle (PDI-P) and the Gerindra Party.

"Our target is progressive. We set a target to be in the top three in the 2019 [legislative] election and we are now aiming to become the first of the top three in 2024," NasDem secretary-general Johnny G. Plate told the press at the party's headquarters in Gondangdia, Central Jakarta, on Wednesday.

The prosecutors told a hearing that the Golkar Party politician had been proven guilty of helping private companies win tenders to deliver subsidized fertilizer and fuels in 2017-2018 in exchange for money.

"We ask the panel of judges to declare the defendant, Bowo Sidik Pangarso, guilty of committing an act of corruption," prosecutor Ferdian Nugroho told the court.

Members of House of Representatives Comission X, overseeing education and sports, have expressed worries that the initiative of Education and Culture Minister Nadiem Makarim to implement technology in education would only perpetuate the country’s digital divide.

Commission member Ledia Hanifa stated that the plan would meet infrastructure challenges, such as electricity networks and internet coverage which remain elusive in certain parts of the country.

Another commission member, Hetifah Sjaifudian of Golkar Party, shared the opinion that technology might only widen the educational gap because many regions lacked the necessary supporting infrastructure. He warned that if the government pushed for online learning methods, students in disadvantaged areas would be further left behind.

President Joko “Jokowi” Widodo has again has asked banks to their lower lending rates in order to help revive the economy in his address at the opening of the 2019 Indonesia Banking Expo in Jakarta on Wednesday.

Bank Indonesia (BI) has lowered its benchmark rate by 100 basis points since July this year, to 5 percent in October. But the cut in the central bank’s benchmark rate has not been followed by commercial banks.

The President questioned why banks had failed to lower their lending rates despite the central bank cutting its benchmark rate for four times since July.

This is not the first time Jokowi has asked local banks to cut their interest rates. He first asked banks to do so during a meeting with leaders of the financial services industry at the Presidential Palace in mid-January 2016. Jokowi made the same request during a meeting with executives of the Financial Services Authority (OJK) and BI at the end of August 2017.

The Federation of Private Domestic Banks (Perbanas) research and development chairwoman, Aviliana, said banks could not immediately adjust their interest rates because of liquidity problems.

She said many banks, especially small and medium banks, suffered liquidity problems because they had to compete not only with large banks in attracting customer funds, but also with government bonds , which offered higher returns.

Government spending has failed to jack up Indonesia’s economic growth in the third quarter as it struggles with a tight budget due to low tax revenue amid a slowdown in the industrial and mining sectors.

Public spending, which accounted for around 8 percent of gross domestic product (GDP), only grew 0.98 percent in the third quarter of this year, Statistics Indonesia (BPS) data show. The figure is a far cry from 6.96 percent growth recorded over the same period last year.

Indonesia’s economy only expanded by 5.02 percent year-on-year (yoy) in the third quarter, slowing further from the two-year low of 5.05 percent yoy recorded in the previous three-month period. Household spending stagnated while investment growth plunged but net exports came to the rescue as imports fell more than exports.

The figure is down from the third quarter of 2018, when the realization reached 25.59 percent of the allocation.

“Government spending, a major part of growth in the first half, had a far smaller contribution in the third quarter, which is understandable given the “frontloading” of social spending around the time of the elections in April,” according to a note by Bank Central Asia's (BCA) economic, banking and industry research team published on Wednesday.

“Given the disappointing rate of tax collection to date, there is little room to do fiscal stimulus this time, although we do expect the usual 'late-year push' to materialize to some extent in the fourth quarter,” it added.

The sluggish government spending was in line with weak tax collection as firms, particularly in the mining and manufacturing sectors, struggled to manage the negative impacts of the United States-China trade spat that lowered commodity prices and weakened international trade.

Many banks, especially small and medium ones, are suffering liquidity problems as a large part of funds in the banking system are being used to finance infrastructure projects, such as toll road construction, an Indonesian Chamber of Commerce and Industry (Kadin) official has said.

Kadin’s deputy chairman for monetary, fiscal and public policy, Raden Pardede, said the country’s massive infrastructure projects used a large amount of the money in the banking system instead of raising funds by issuing bonds, as done in the past.

"The sources of funding for infrastructure projects should normally come from the capital market, not banks," the economist stated during a forum on bank liquidity challenges in Jakarta on Monday.

Raden explained that funding for infrastructure projects should ideally come from the capital market, such as through debt papers or bond issuance, as those instruments offered long-term maturity.

However, due to the country's shallow financial market, construction firms instead turned to banks to seek financing for their projects, which then created a maturity mismatch as a larger part of the banks’ money came from short-term funds such as savings and deposits.

The maturity mismatch caused the banks’ liquidity to tighten and limited their ability to disburse fresh loans.

Coordinating Maritime Affairs and Investment Minister Luhut Binsar Pandjaitan will hold a coordinating meeting Thursday to decide whether to go ahead with an ore export ban, which was imposed last week to allow the government  to investigate alleged violations of mineral export regulations.

The meeting will discuss the results of the investigation and determine whether the nickel ore export ban should be continued or should be imposed in line with Energy and Mineral Resources Ministerial Regulation No.11/2019, which stipulates mineral ore exports will be banned of as Jan. 1, 2020.

According to Indonesian Nickel Miners Association (APNI) secretary-general Meidy Katrin Lengkey, the government should give certainty on the matter because since the export ban was imposed on Oct. 29, nickel exporters had suffered Rp 500 billion (US$35.68 million) in losses.

The government ordered a temporary halt to exports of nickel ore on Oct. 28  due to alleged violations of ore export regulations. Ore shipments increased sharply in recent months after the government announced it would ban ore exports at the end of this year, two years ahead of the initial schedule.

The government plans to use Gojek’s delivery application in the country’s sea transportation system in order to eliminate a monopoly and reduce operating costs.

Transportation Minister Budi Karya Sumadi has assigned a team to  study the possibility of using  the on-demand delivery service application developed by Gojek, which is managed and owned by PT Aplikasi Karya Anak Bangsa.

Budi said that by using the application, similar to that used by Gojek’s GoFood division, the shipment of goods would be simpler and more transparent. The use of the application could also involve many parties so that the monopoly in sea transportation would be eliminated.

According to Budi, the application would give ease in shipping goods and be less complicated, not only in the shipment of small packages but also large containers.