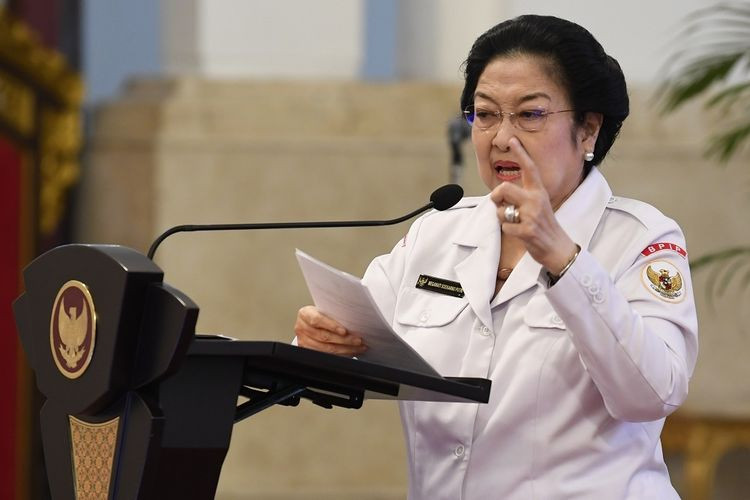 Agency for the Implementation of the State Ideology of Pancasila (BPIP) steering committee head Megawati Soekarnoputri speaks during a presidential lecture event at the State Palace in Jakarta on Dec. 3, 2019. (Antara/Puspa Perwitasari)

Although the government has decided not to repatriate Indonesian sympathizers of the Islamic State (IS) group, Coordinating Politics, Law and Security Affairs Minister Mahfud MD has confirmed that any children of Indonesian nationals who joined IS should be reported to the government.

To date, the government has only received reports from foreign authorities and international organizations about former IS fighters from Indonesia. The country’s National Counterterrorism Agency (BNPT) has attempted to confirm the reports, but they have been unable so far to meet the Indonesian IS sympathizers nor to obtain any records on them.

On the other hand, all Indonesian nationals currently displaced across countries torn by the IS will be protected by the government. Mahfud explained that these individuals, as long as they are not terrorists, can report to the Indonesian embassies in the countries in which they currently find themselves to gain assistance from the Indonesian government.

The House of Representatives received the representatives of labor unions who had been protesting against the omnibus bill on job creation outside the House complex in Senayan earlier today. The labor unions’ representatives, particularly those from the All-Indonesia Workers Union Confederation (KSPSI), were given an opportunity to express their opinions.

Labor union members have protested against the omnibus bill on the grounds of the lack of transparency surrounding the bill’s deliberations, claiming that the government has not involved the union in drafting the bill. “If the omnibus bill reduces the welfare of workers, we will reject it completely,” said Andi, son of former manpower minister Jacob Nuwa Wea.

Imran objected to Megawati’s decision to appoint Muslahuddin Daud as chairman of the PDI-P’s Aceh chapter and stated that the appointment of the chairman should have been decided by Aceh PDI-P members, rather than the party’s central executive board (DPP).

“The party’s DPP unilaterally appointed Muslahuddin as the chairman of the PDI-P’s Aceh chapter without involving the participants of the conference. This is a violation of the party’s statutes,” Imran explained on Wednesday.

Manpower Minister Ida Fauziah said that the government had submitted the “job creation” omnibus bill draft to the House of Representatives today. Meanwhile, the Confederation of All-Indonesian Workers Union (KSPSI) held a street protest in front of the House of Representatives complex. KSPSI president Andi Gani Nena Wea said that he felt disappointed by the policy-making process, because the government had not included labor unions in drafting the bill.

President Joko “Jokowi” Widodo has ordered his ministers to tighten import requirements for steel, because steel imports have become one of the main contributors to the country’s trade deficit. According to Statistics Indonesia (BPS) data, Indonesia imported US$10.4 billion worth of steel in 2019. To solve this problem, Jokowi has told his ministers to improve the competitiveness of the domestic steel industry through three policies: ensuring stable supply of iron ore, cutting the industrial gas price to $6 per million British thermal units (MMBTU) and reviving the industry through down-streaming.

On Tuesday, Gojek co-CEO Kevin Aluwi said that the homegrown ride-hailing company’s revenue had doubled in 2019. Moreover, the application has been downloaded by 170 million users in Indonesia and Southeast Asia.

Based on Kevin’s statement in the 2019 PE-VC Summit, CNBC Indonesia calculated that Gojek’s gross merchandise value (GMV) in 2019 should be around US$25 billion.