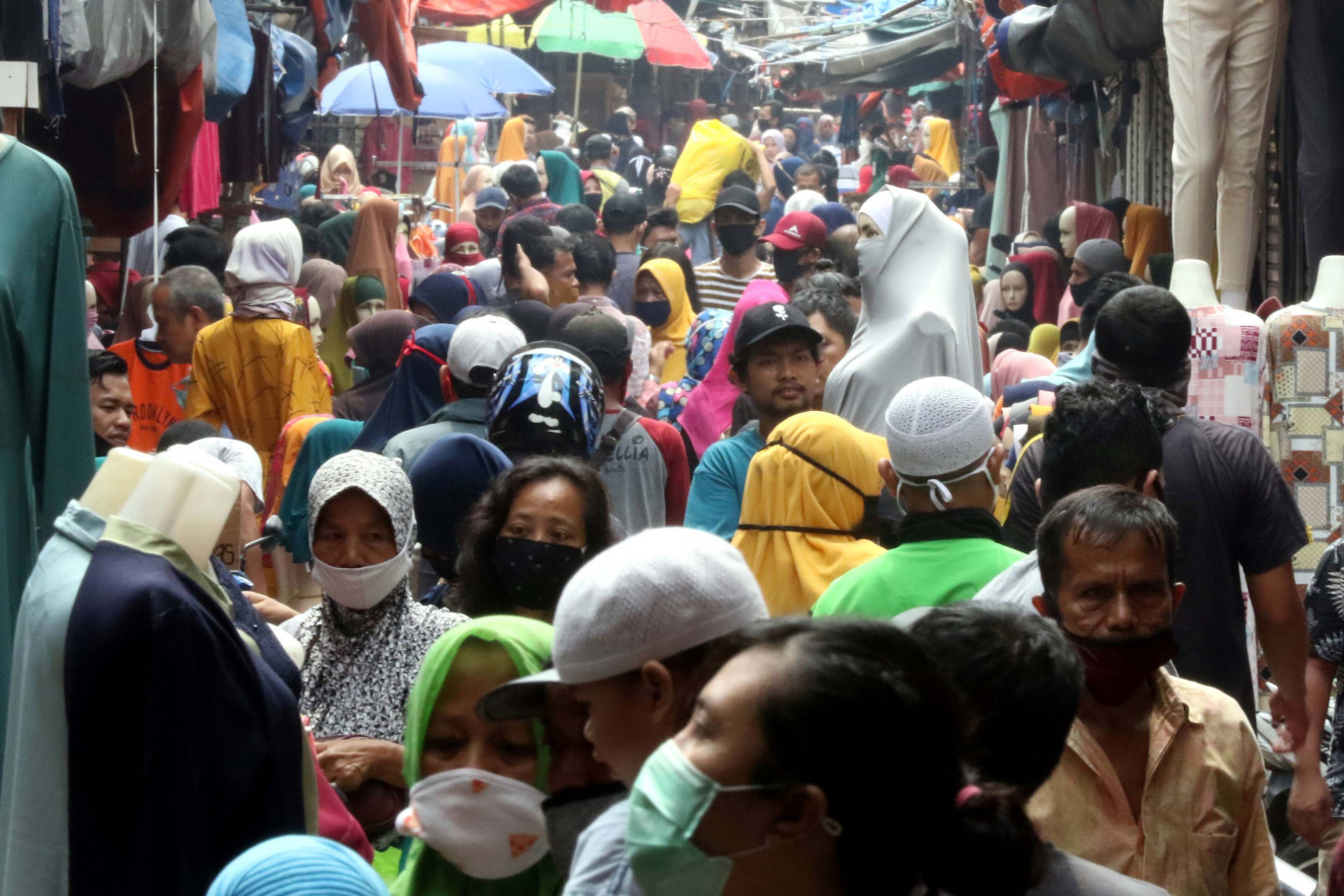 Jl. Jatibaru in Tanah Abang, Jakarta, is seen packed with sellers and shoppers on May 18, a week before the Idul Fitri holiday. (JP/Dhoni Setiawan)

President Joko “Jokowi” Widodo has asked state agencies, such as the Corruption Eradication Commission (KPK), Development Finance Comptroller (BPKP) and Attorney General's Office (AGO), to oversee the distribution of the social assistance provided by the country for residents affected by the COVID-19 pandemic.

Jokowi said that the supervision of the three agencies was to prevent possible abuse of the social aid funds. He also requested the entire distribution process be facilitated so that affected families would be able to receive the aid on time.

Religious Affairs Minister Fachrul Razi has strongly advised citizens to abide by Law No. 6/2018 on health quarantine and perform Idul Fitri prayers in their respective homes.

Fachrul said he had considered the information from the World Health Organization (WHO) as well as the State Intelligence Agency’s (BIN) prediction. The latter had predicted a high surge of COVID-19 cases should mass prayers be held in public mosques.

Istiqlal Grand Mosque in Central Jakarta is the largest mosque in Southeast Asia.

Religious Affairs Minister Fachrul Razi said earlier today that he would consider the option of cancelling this year’s haj trips should Saudi Arabia not announce its final decision on the matter by Wednesday, May 20.

Fachrul said the government was still waiting for an official announcement from Saudi authorities regarding this year’s haj pilgrimage amid the COVID-19 pandemic.

Previously, the Saudi authorities informed Indonesia that they would announce their final decision on the pilgrimage by the end of April. However, they rescheduled the announcement to May 12 at the latest.

Finance Minister Sri Mulyani Indrawati has allocated Rp 87.59 trillion (US$5.9 billion) to so-called anchor banks to ease the liquidity crunch suffered by the country’s financial sector, particularly in the provision of working capital loans, and to support debt restructuring by micro, small and medium enterprises (MSMEs). Besides acting as intermediaries between the Finance Ministry and banks in restructuring MSMEs’ debts, anchor banks can also participate directly in the restructuration program. Deputy Finance Minister Suahasil Nazara denies that this policy could result in redundancy in roles between members of the Financial System Stability Committee (KSSK), particularly with Bank Indonesia that has the short-term liquidity loan (PLJP) facility to support banking system liquidity.

Individual investors are showing growing appetite for government bonds (SBN) because the low-risk securities provide promising returns amid uncertain market conditions. The confidence of retail investors was apparent in the latest issuance of sharia-compliant government retail bonds (Sukri), while the government saw oversubscription of its Sukri SR-012 bond series between Feb. 24 and March 18. The demographic of bond buyers has changed, with millennials making up 39.58 percent of SR-012 buyers and baby boomers making up 36.5 percent of SR-11 buyers, according to the Finance Ministry’s financing and risk management office (DJPPR) data.

This does not mean, however, that many equity investors had switched to the bond market. On the contrary, many online stock trading sites have seen a rise in trading value of more than 20 percent compared to last year’s figure. More moderate millennial investors preferred bonds as their investment vehicle and more aggressive millennial investors generally purchased blue chip stocks while they were still cheap, explained founder and CEO of Investor Muda, Jason Gozali.

Gold and copper miner PT Freeport Indonesia has decided to delay the construction of three projects due to COVID-19 pandemic. The projects are a copper smelter in Gresik, East Java, a semi-autogenous (SAG) mill worth US$300 million and a power plant at Amamapare Port in Papua. The delay was announced by Freeport spokesperson Jonny Lingga after a meeting with the Mimika Legislative Council on Monday. Besides cancelling its construction projects, Freeport has also cut its mining activities, from 100 trucks of ores per day to around 20 trucks.

Communications and Information Minister Johnny G. Plate has urged tech companies to improve their cybersecurity systems following recent reports of data breaches on Indonesia’s largest e-commerce platforms. “There were large-scale attacks on our digital industry recently. I’m asking all companies to maintain their security systems to protect their applications and overall business. The digital economy will play a greater role due to the pandemic, and Indonesians will rely heavily on the industry to fulfill their daily needs,” Johnny said during online digital talent event Grab Ventures Velocity, held by ride-hailing giant Grab.

According to the ministry’s data, user traffic on online marketplaces has increased 30 percent, while e-wallet payment usage has jumped 100 percent since the pandemic struck Indonesia in early March. Jhonny said the Communications and Information Ministry aimed to expedite the digitization of Indonesia’s 64 million-strong micro, small and medium enterprises (MSMEs) to tap into the pandemic-induced online boom.