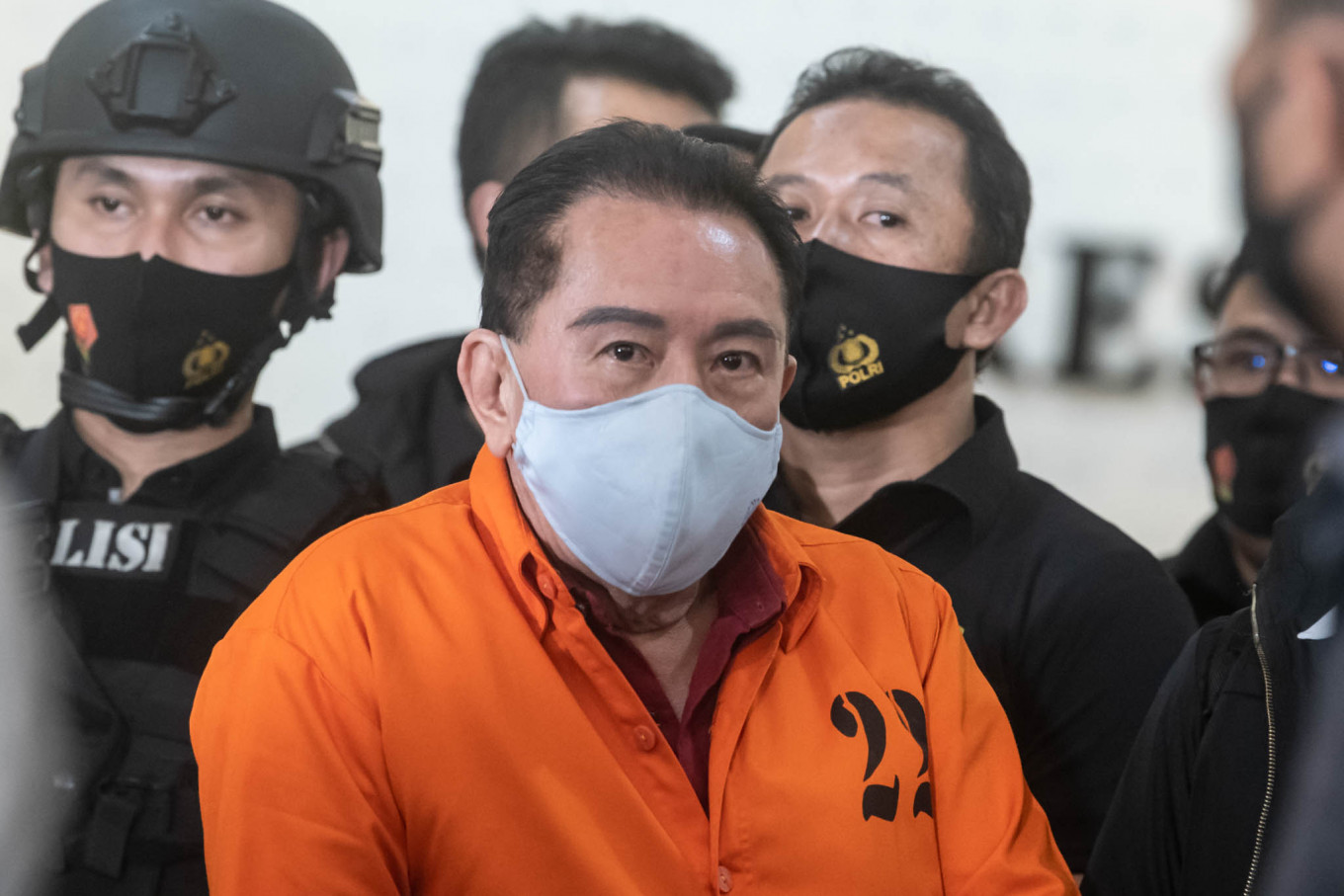 Djoko Tjandra, a former fugitive in the high-profile Bank Bali graft case, is presented during a press conference at the National Police headquarters in Jakarta on June 30. Djoko, who was arrested in Malaysia, had been on the run for more than a decade. (Antara/Muhammad Adimaja)

The Home Ministry will provide information about the nation’s most-wanted criminals – a list maintained by the Attorney's General’s Office (AGO) – on the government’s civil registry to prevent further failures of enforcement and stop exploitation of the system by fugitives.

Home Ministry population and civil registration director general Zudan Arif Fakhrulloh said that the ministry had received the most-wanted list from the AGO.

"With the integrated data, the fugitives' records will spread quickly, and [this will] minimize their room for [escape]," Zudan said in a statement on Thursday.

A movement campaigning for kotak kosong (blank box) has reportedly emerged in Surakarta in a bid to prevent Gibran Rakabuming Raka, President Joko “Jokowi” Widodo’s eldest son who will likely be the sole candidate in the upcoming Surakarta mayoral election, from winning the election. Among those who support the blank box movement is Zen Zulkarnaen, a cultural activist in Surakarta who argued that Gibran’s sole candidacy indicated a failure in the country’s democracy.

Meanwhile, the Prosperous Justice Party (PKS), the only party in the Surakarta Legislative Council, which does not support Gibran’s candidacy, said that it would still attempt to nominate its own candidate who would later challenge Gibran’s mayoral bid. As it only holds five seats in the Surakarta Legislative Council, the PKS will have to form a coalition with other parties to nominate its own candidate.

The headquarters of the Indonesian Democratic Party of Struggle’s (PDI-P) Cianjur executive board (DPC) was hit by a Molotov cocktail earlier today, which set the front part of the headquarters on fire. The unknown attackers reportedly rode a motorcycle and fled the scene before party members could apprehend them, said PDI-P’s Cianjur DPC head Ono Surono.

Bank Indonesia (BI) has purchased Rp 82.1 trillion (US$5.6 billion) worth of government bonds (SBNs) through private placement under a burden-sharing scheme in an effort to support the government in mitigating the impact of COVID-19 and boosting national economic recovery. The SBNs purchased are VR0034, VR0035, VR0036 and VR0037 with a nominal price of Rp 20.52 trillion each. The bonds have variable rates with maturity dates ranging from five to eight years. For the first three months, the interest rate will be 3.8 percent, the same as the seven-day reverse repo rate (7DRRR).

Bank Indonesia (BI) recorded an increase in its foreign reserves to a record high of US$135.1 billion in July, from $131.7 billion in the previous month. According to BI spokesperson Onny Widjanarko, the increase was driven by the sale of the country’s dollar-denominated bonds and disbursements of foreign loans. According to BI’s calculations, the level of July’s foreign reserves was enough to pay 8.6 months of imports and Indonesia’s sovereign debts.

The Jakarta Transportation Agency claims that the capital city’s traffic volume has decreased by 4 percent after the Jakarta provincial administration reimposed the odd-even license plate policy. On the other hand, the number of public transportation passengers increased by 3 percent, Jakarta Transportation Agency head Syafrin Liputo said. Nevertheless, the increase has not resulted in crowds at bus stops and train stations, as the agency has increased the number of buses in operation, as well as extending the MRT operational times.