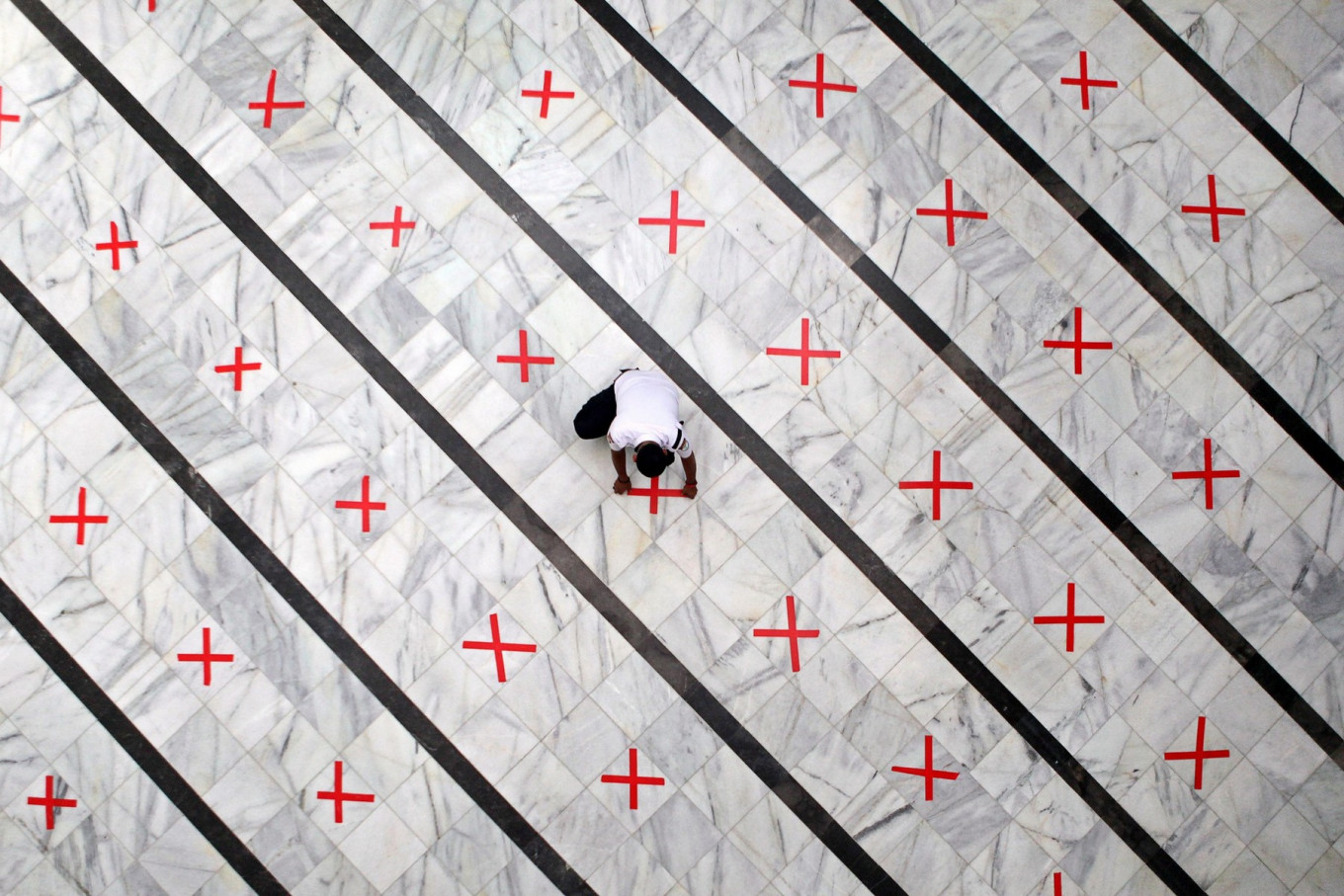 A mosque staff member fixes a physical distancing mark on the floor of the Cut Meutia Mosque in Central Jakarta on Thursday, which had been closed to curb the spread of COVID-19.The Jakarta administration has called on all Muslims living in Jakarta’s red zones to avoid mass prayers during Idul Adha (Day of Sacrifice), which is expected to fall on July 31, to prevent the spread of the coronavirus. (JP/Seto Wardhana)

Lapor COVID-19 community movement initiator Irma Hidayana has said that issues of data discrepancy at the regional level have yet to be solved, stating that more provincial administrations have become reluctant to transparently report their COVID-19 data.

Irma said last month only one provincial administration was considered problematic, namely the Central Sulawesi administration which had eliminated their death reports of patients under surveillance (PDP) and persons under observation (ODP) from their official website.

Additionally, Lapor COVID-19 also found a decrease in reported deaths by a number of local administrations. For example, the Riau administration reported 200 PDP deaths on July 3. However, on July 11, the number was reduced to 187 people.

The emergence of COVID-19 clusters in offices serves as a warning that economic recovery will be difficult if the outbreak is not yet under control. Business owners and office managers are thus responsible for implementing health protocols and ensuring their employees’ safety.

“Transmissions in the offices are a warning that COVID-19 is still spreading, however, the public has only been fed with optimist views, so they have become less vigilant,” Institute of Development on Economics and Finance (Indef) researcher Bhima Yudhistira said on Tuesday.

According to Bhima, Indonesia cannot recover economically before the outbreak is controlled and this required the involvement of all parties, including the business world. “Now, there is an imbalance. Employees at the managerial level and lower are forced to come to the office, whereas employers or officials work at home without ensuring that health protocols are implemented,” he said.

The Jakarta administration has called on all Muslims living in Jakarta’s red zones not to attend mass prayers during Idul Adha (Day of Sacrifice), which is expected to fall on Friday, to prevent the spread of COVID-19.

The Jakarta Bureau of Mental and Spiritual Education (Dikmental) warned of massive spread of the coronavirus if worshipers ignored the call as they would potentially be in close contact with virus carriers.

“For people in red zones, please pray at home together with your respective families. This is for collective health and safety,” Dikmental head Hendra Hidayat said on Tuesday as quoted by kompas.com.

Based on the city’s website for COVID-19, corona.jakarta.go.id, as of last Thursday, 33 community units (RWs) in Jakarta had been categorized as red zones, an increase from 30 RWs recorded earlier.

Vaccine targeted to be available by end of 2020
Media Indonesia, p. 1

The government, through the Office of the Coordinating Economic Affairs Minister, said that a COVID-19 vaccine is targeted to be available before the end of the year, or between September and November 2020.

“Hopefully [the vaccine will be available] before the end of the year, or September, October, November […] so that early next year work can gradually return to normal and the economy can start to recover,” said Titra Hidayat, an official from the ministry in a webinar on Tuesday.

Tirta added that a vaccine must be available in large quantities and within a short time, saying that, for example, an estimated 10 million vaccines per month may be necessary. “If we then want a vaccine for 200 million people, it would take 20 months. That is still a long time,” Tirta said.

Currently, all COVID-19 matters are being handled by the COVID-19 handling and national economic recovery committee formed by President Joko “Jokowi” Widodo, which operates under the coordination of the Office of the Coordinating Economic Affairs Minister.

National Commission on Human Rights (Komnas HAM) commissioner Mohammad Choirul Anam has urged the government to issue a government regulation in lieu of law (Perppu) encompassing COVID-19 countermeasures. He deemed the existing regulations as not strong enough to act as a legal umbrella to overcome the obstacles in handling the pandemic.

“From the beginning, we have asked for a Perppu because the governance of handling health emergencies, by far, needs the most regulations,” Anam said in an online press conference on Tuesday.

According to Mohammad, several regulations must be implemented during a pandemic but are scattered across different laws. This includes the law on handling social conflicts, the law on health emergencies as well as the Health Law. A Perppu, he said, was needed to simplify and streamline these many laws.

Mohammad added that a health emergency institution led directly by the President may also be needed.

The government has been pushing for national economic recovery amid the COVID-19 pandemic and is optimistic that the economy can rebound in 2021. Although Indonesia’s economic growth is projected to contract by 0.4 percent to 1 percent this year, it is expected to rebound to 5.5 percent next year.

The government is ready to increase the gap in the state’s budget deficit from 4.17 percent this year to 5.2 percent next year as an effort to boost the economy amidst uncertainty and fear of a second COVID-19 wave.

An increase in manufacturing activities shows that the industry has started to accelerate and hopes to recover by the end of the year. For the tourism industry, strategies to adapt to the new normal protocols have also been prepared to welcome back travelers.

Nevertheless, this optimism needs to be accompanied by fast and accurate aid distribution, which will be the key to recovering the national economy.

The gold contract price for December 2020 has reached US$1,962.6 per troy ounce. It had even hit US$1,971.31 per troy ounce on Tuesday. The price of gold produced by PT Aneka Tambang Tbk (Antam) also reached a record-breaking price of Rp 1.02 million per gram yesterday morning, before being corrected to Rp 1.01 million per gram.

According to Indef economist Bhima Yudhistira, the increase in gold prices is influenced by the worsening global economic crisis and recession. Historically, gold prices increase when investors panic and expect slower economic recovery.

Gold prices could potentially pass US$ 2,000 per troy ounce soon, added Bhima. There is also a trend of reflationary trade where investors prefer assets related to inflation and growth, such as stocks and gold.

Meanwhile, Goldman Sachs' research team projected that the gold price could potentially reach US$ 2,300 per troy ounce in the next 12 months. The increase in gold prices is also affected by the market expectation on the Fed’s policy, the political situation in the US, and the current geopolitical tension in addition to the fear of a second wave of COVID-19.

The Fed is expected to roll out a US$1 trillion stimulus during the Federal Open Market Committee meeting this week to save the US from recession. This kind of stimulus will usually lower the exchange rate for the US dollar while gold prices will increase.

With Indonesia’s low worker productivity standing as a barrier to investment, some businesspeople are expecting a proposed wage scheme in the government’s omnibus bill on job creation to help reverse the tide of slow progress in bringing in investors.

Indonesian Employers Association (Apindo) head of employment Bob Azam has suggested that the government replace the current formula on determining the minimum wage with a scheme that boosts wages based on worker productivity.

"There will not be any reduction to the current minimum wage. But the raise should be set in a more constructive manner according to any increases in productivity. Wages should not grow faster than productivity,” Bob said in a phone interview.

At present, regional administrations set the provincial minimum wage every year based on the inflation rate and economic growth rate under the prevailing 2003 Labor Law. However, many businesspeople have criticized the increases for not resulting in greater productivity among workers.

Indonesia’s manufacturing plants only scored 74.4 on productivity, compared to 86.3 for the Philippines, 82.7 for Singapore, 80.1 for Thailand and 80 for Vietnam, according to a survey released earlier this year by the Japan External Trade Organization (JETRO).

“As an investor, if I want to enter Southeast Asia, then Vietnam, Thailand, Myanmar, Malaysia and the Philippines would be more preferable, not Indonesia,” said University of Indonesia economist Fithra Faisal. “Wage [increases] have been high while productivity levels stagnate, so cost of production becomes very expensive.”

Kadin chairman Rosan P. Roeslani said that the slow disbursement of the PEN budget had caused the economy to contract 4 to 6 percent in the second quarter this year.

Rosan explained that businesses at all level – micro, small, medium and big businesses – needed the government assistance to survive the pandemic and grow. Based on the requests from business associations under Kadin, total assistance needed for businesses is about Rp 303.7 trillion in working capital loans for the next six months.

The State-Owned Enterprises (SOE) Ministry has assigned SOEs to sub-contract work below Rp 14 billion to micro, small and medium enterprises (MSMEs) in an effort to help boost economic recovery amid the COVID-19 pandemic. The ministry said that SOE funds that would be extended to MSMEs totaled Rp 18.5 trillion (US$1.2 billion) this year.

SOEs Deputy Minister Kartika Wirjoatmodjo said that the program, using the ministry’s digital platform Padi UMKM, would target over 72,000 MSMEs across the country. They would become SOEs’ partners in various projects, with an average value of Rp 250 million each.

Kartika added that all the MSMEs that wanted to partner with SOEs must be certified by the Cooperatives and Small and Medium Enterprises Ministry.

The Rp 18.5 trillion is a separate fund from the national economic recovery program, which allocated Rp 123 trillion for MSMEs.