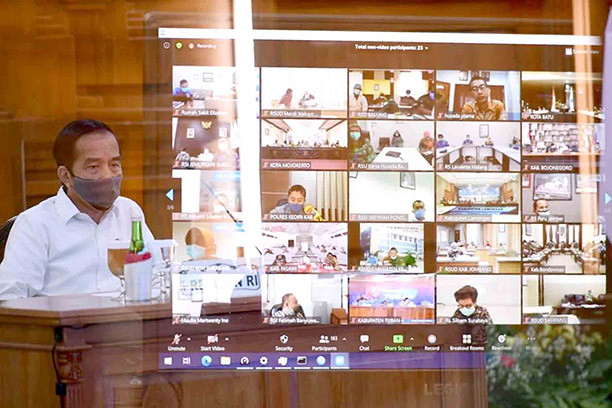 These are the rules: President Joko “Jokowi” Widodo presents guidelines about integrated COVID-19 handling in the East Java COVID-19 task force headquarters at the Grahadi Building in Surabaya, East Java.(Courtesy of the Presidential Secretariat/Muchlis Jr)

Home Ministry inspector general Tumpak Haposan Simanjuntak said that, as of today, there were 379 reports about state civil servants (ASN) failing to remain neutral ahead of the 2020 simultaneous regional elections slated for December this year.

Responding to the reports, Tumpak said the ministry would soon discuss the matter with the Administrative and Bureaucratic Reform Ministry. Tumpak added that, following the discussion, both ministries would issue a joint ministerial decree (SKB) on ASN neutrality.

According to Tumpak, there are two laws that regulate ASN neutrality, namely Law No. 5/2014 on ASN and Law No. 23/2014 on Regional Elections. Articles 2 and 9 of the ASN Law stipulate that ASNs shall remain neutral, free from any influence and interference by any political party or faction.

President Joko “Jokowi” Widodo deemed small-scale social restrictions, such as within neighborhood units (RT), community units (RW) or villages, more effective than citywide restrictions. The President hoped that each region head would resort to such a strategy to curb the spread of the virus in their respective areas.

“I think RT, RW or village-based intervention are the most effective in the current situation,” Jokowi said in a video uploaded to the Presidential Secretariat’s YouTube channel, which was apparently shot during his visit to Semarang, East Java.

During his visit, Jokowi had also asked regional leaders to use their health budgets as well as their social aid budgets soon to provide for the people a social safety net.

New COVID-19 epicenter East Java has one of the lowest testing rates in Indonesia
The Jakarta Post (https://tinyurl.com/y8jytbyr)

The Health Ministry revealed on Monday that East Java, Indonesia's new COVID-19 epicenter, had one of the lowest testing rates of all provinces, even as it continues to record the highest number of daily new cases.

East Java has emerged as the new epicenter for COVID-19 in Indonesia after surpassing the number of confirmed cases recorded by Jakarta last week.

The province has nevertheless ended its large-scale social restrictions (PSBB) and looks unlikely to reinstate them even as experts call for stricter controls to stem the spread of COVID-19.

The government and the House of Representatives’ Budget Committee have agreed on the 2021 state budget’s macroeconomic assumptions. House Budget Committee chairman Said Abdullah said the decision was taken in meetings with House Commission VII overseeing energy and Commission XI overseeing financial affairs. The 2021 budget’s macroeconomic assumptions include gross domestic product (GDP) growth projected between 4.5 percent and 5.5 percent, an inflation rate of 1 to 2 percent, a yield on 10-year government debt papers (SBN) of between 6.29 and 8.29 percent, a rupiah exchange rate at Rp 13,700 to Rp 14,900 per US dollar, Indonesian crude oil price between $42 and $45 per barrel, a daily oil lifting target of 690,000 to 700,000 barrels per day (bpd), and daily gas lifting target of 990,000 to 1.1 million barrels of oil equivalent per day (boepd).

Indonesian Private Electricity Producers Association (APLSI) chairman, and director of coalminer Toba Bara, Arthur Simatupang, has told the media that Japanese Mitsui Corporation plans to divest its 45.5 percent stake in Paiton coal-fired power plant (PLTU). The divestment is estimated to be worth more than US$1 billion. Mitsui’s decision is possibly driven by a decline in electricity usage during the COVID-19 pandemic. PLTUs will remain as an attractive investment opportunity for the next five to 10 years, but foreign investors are likely to avoid investing in overcrowded Java island, Arthur said.

Publicly listed Bank Bukopin has applied a cash withdrawal limit for depositors. Bank Bukopin spokesperson Meliawati said the bank imposed the withdrawal limit on a situational basis to ensure cash availability for all depositors. South Korea-based Kookmin Bank, one of Bukopin’s shareholders, has already injected fresh cash amounting to US$200 million into the bank’s escrow account, and the cash will also be used to complete the takeover process increasing Kookmin’s stake from 21.99 percent to over 51 percent. Besides that, Bank Bukopin is also receiving technical assistance from state-owned lender Bank Rakyat Indonesia. Previously, a depositor from Klaten, Central Java, posted on Twitter that cash withdrawals from the bank were limited to Rp 3 million (US$209) to Rp 5 million per day. On June 2, Bank Bukopin announced that depositors should notify the bank two days before the transaction if seeking to withdraw more than Rp 10 million.