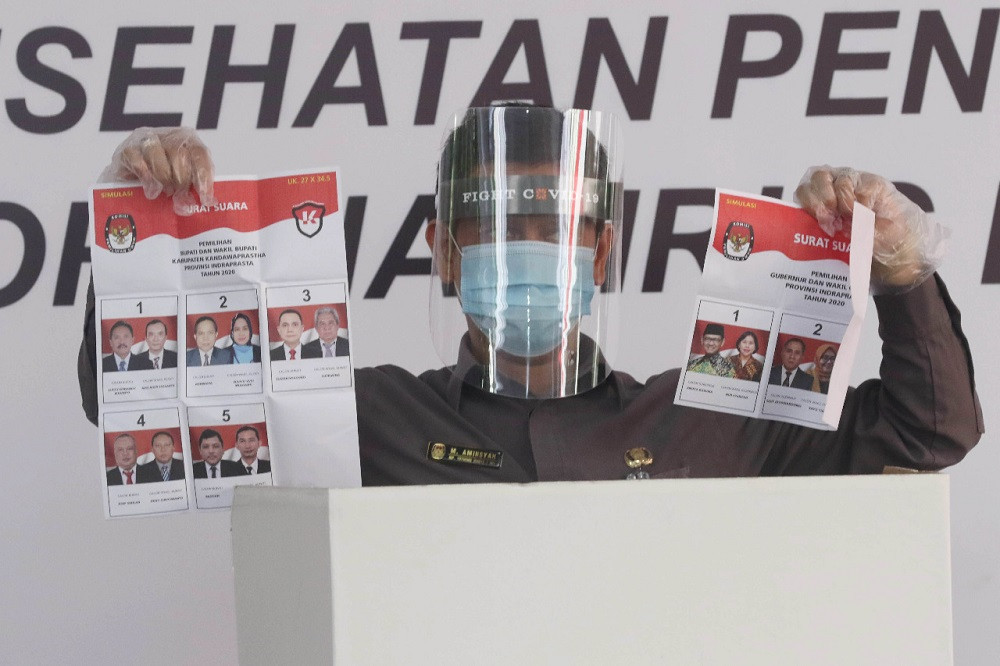 The right to vote and health: An official presents the ballots during a simulation of the Dec. 3 regional elections held at the General Elections Commission (KPU) compound in Central Jakarta on July 22. (JP/Dhoni Setiawan)

House of Representatives member Mulyanto of the Prosperous Justice Party (PKS) has affirmed that amendments made to the final draft of the Job Creation Law were proposed by the State Secretariat.

This was revealed after the State Palace denied allegations of having edited the final draft. Presidential expert staff member Ade Irfan Pulungan said he had never heard of revisions being made to the jobs law and that the draft had not changed since it was passed on Oct. 5.

Having previously formed a special team, the PKS House faction is still reviewing the differences between the two drafts – the 905-paged draft passed by the House and the 812-paged draft sent to the President. Mulyanto made an assurance that the findings would be made public sometime this week.

The PKS and the Democratic Party were the only political parties that opposed the jobs law.

Defense Minister Prabowo Subianto is said to have met with Austrian Defense Minister Klaudia Tanner to discuss the purchase of a used Eurofighter Typhoon jet fighter, which Prabowo had been eyeing since June.

The two met at the Austrian Defense Ministry’s office in Vienna on Oct. 20. Prabowo was accompanied by Indonesian Ambassador to Austria Darmansjah Djumala and Sugiono, House of Representatives Commission I member of the Gerindra Party.

Plans to purchase second-hand weapon systems have drawn criticism in Indonesia, as the jet fighter was produced some dozen years ago. Despite arguments that used weapons can be acquired in bigger numbers and with faster deployments, doing so may risk security issues and taint the ministry’s budget accountability.

Nine members of the National Police registered as candidates in the upcoming regional elections have resigned from their positions within the force to guarantee the institution's neutrality during the elections, the police have confirmed.

“Without a resignation notice issued by the National Police chief, one cannot sign up as a candidate in the regional elections," he added.

This year's regional elections are scheduled to take place simultaneously on Dec. 9 in 270 regions, including nine provinces, 224 regencies and 37 cities.

Confederation of Indonesian Trade Unions (KSPI) president Said Iqbal has demanded an 8 percent minimum wage hike for 2021, despite the negative impact of the COVID-19 pandemic. Said argued that, during the 1998 monetary crisis, then-president Bacharuddin Jusuf Habibie had ordered his manpower minister to increase Jakarta’s minimum wage by 16 percent. At the time, the gross domestic product contracted by 17.6 percent. He also argued that an increase in the minimum wage was necessary to maintain household spending, which in turn would boost economic growth.

The Finance Ministry announced that tax revenue collection from January to September this year had reached Rp 720.62 trillion (US$49.15 billion), or 62.61 percent of the full-year target of Rp 1.198 quadrillion. To meet the target, the tax office must collect tax revenue amounting Rp 448.2 trillion. Finance Minister Sri Mulyani Indrawati said tax revenue collection in September was down 16.86 percent year-on-year (yoy), marking an improvement over July and August, when the annual contraction was 26.1 and 21.5 percent, respectively.

The completion of the 2,000 megawatt Batang coal-fired power plant is delayed until next year, coal mining firm PT Adaro Energy announced. Adaro president director Garibaldi “Boy” Thohir said the delay was due to the COVID-19 pandemic and electricity oversupply, which burdened state-owned electricity company PLN. Boy expressed hope that the power plant could begin operations by the end of next year.