No foul play behind AGO building blaze, prosecutor says 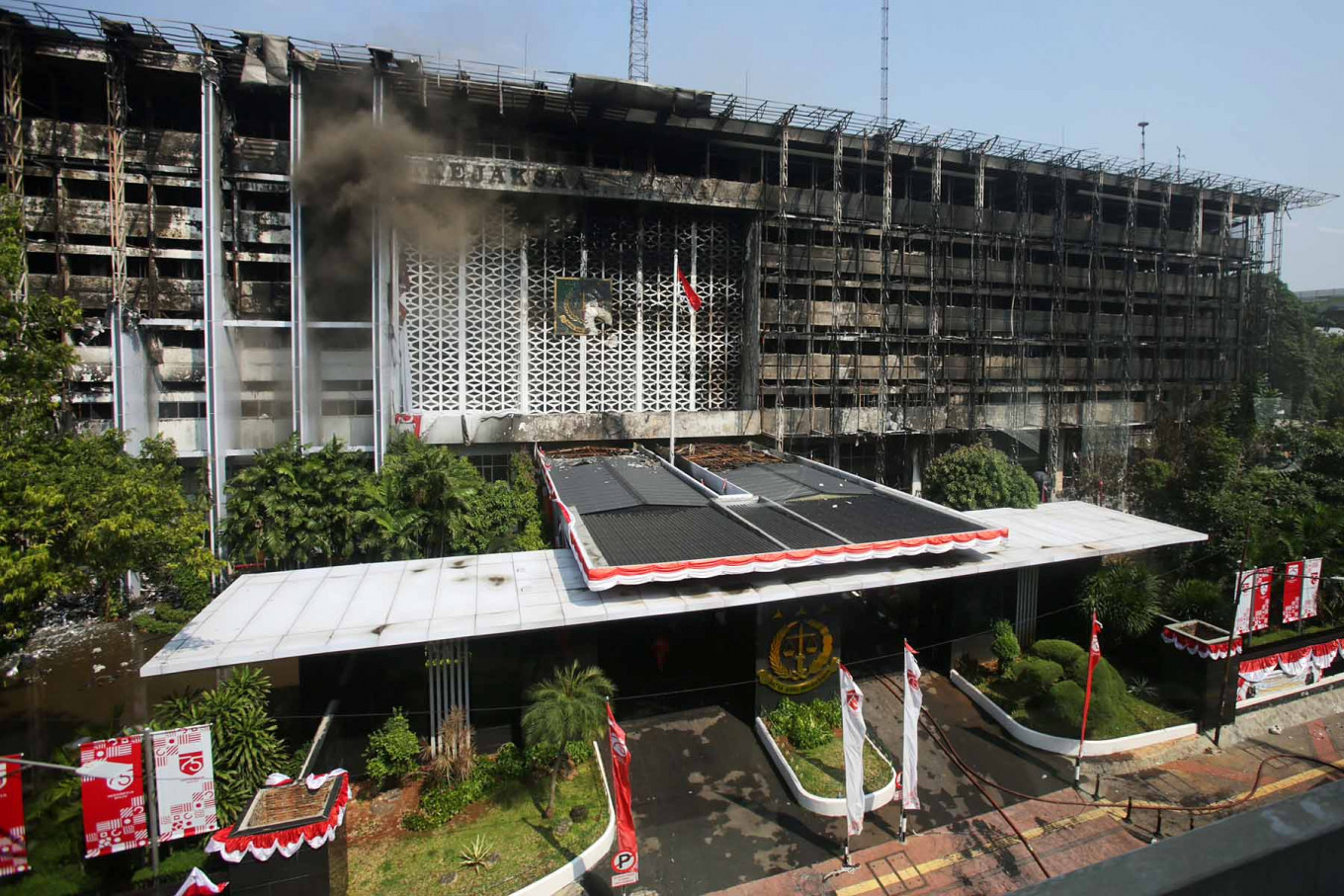 The remains of the main building of the Attorney General’s Office compound in South Jakarta continues to smolder on Aug. 23 after it was gutted by a fire the night before. The Jakarta Police have questioned 105 witnesses to determine the cause of the fire. (JP/Wendra Ajistyatama)

The Indonesian Society of Respirology (PDPI) has asked the Health Ministry to disclose the requirements for recipients of the government’s COVID-19 vaccination program.

On the other hand, Agus also pointed out that mass vaccinations should not be rushed and that vaccine candidates had to first pass clinical trials and be approved by the Food and Drug Supervisory Agency (BPOM).

The Health Ministry previously said that vaccinations would only be given to those aged between 18 and 59 years because the clinical trials conducted thus far had only tested among those age groups. So far, clinical trials of the three candidate vaccines have not involved a 0-17-year age group or a group over 60 years. However, the ministry gave an assurance that those age groups would still receive vaccinations.

NasDem party lawmaker Irma Suryani Chaniago has suggested that governors should be directly elected by the central government.

The suggestion was made during an episode of weekly talk show Mata Najwa concerning the government’s COVID-19 response. Indef economist Enny Sri Hartanti was of the opinion that Indonesia’s COVID-19 response was quick enough but had issues in the execution of policies.

In response, Irma argued that governors themselves were lacking in their COVID-19 response, unable to implement the policies set by the central government. This is reflected, according to Irma, by low regional budget absorption.

“This is a problem. It is why governors should be appointed by the government. Regents and mayors, however, can be directly elected [by the people],” said Irma.

“Every regional administration’s budget comes from the Home Ministry. If the ministry disagrees, they can just reallocate it. What Mbak Irma is suggesting is counterproductive to our efforts to strengthen regional autonomy,” Mardani said.

The junior prosecutor for general crimes at the Attorney General's Office (AGO), Fadil Zumhana, says there is no indication of arson behind the fire that ravaged the main building of the AGO complex in Kebayoran Baru, South Jakarta, in August.

"No [foul play] was detected, [the fire] was caused by negligence," Fadil said following a case screening as part of an investigation into the fire with the National Police's detectives on Wednesday.

Authorities reached the conclusion after examining the evidence, he said without elaborating on the details of the findings.

"The fire was caused by a mistake, it was not intentionally set," Fadil added as quoted by tempo.co.

The Indonesian Indigenous Entrepreneurs Association (Hippi) has predicted that the provincial minimum wage (UMP) for Jakarta will see no increase in 2021 following the economic slowdown due to the COVID-19 pandemic. Hippi chairman Sarman Simaronjang said this was reasonable, considering many small and medium businesses had closed, employees had been laid off, employers’ cash flow had been affected and public purchasing power had weakened. “The burden on entrepreneurs is already big, so being able to survive the pandemic is already a blessing. If the UMP is raised, it will seriously hit entrepreneurs,” Sarman said.

Bank Indonesia (BI) Governor Perry Warjiyo has predicted that e-commerce transactions will reach Rp 429 trillion (US$29.17 billion) this year, double the 2019 figure at Rp 205.5 trillion. According to BI data, e-commerce transactions from January to August this year totalled Rp 180 trillion. “During the pandemic, we have observed rapid acceleration in financial digitization, particularly in the retail sector as well as with micro, small, and medium enterprises (MSMEs),” Perry said in a webinar on Wednesday. As of Oct. 16, the number of MSMEs that utilized the Quick Response Indonesia Standard (QRIS) code was more than 5 million.

GMF AeroAsia, the subsidiary of national flag carrier Garuda Indonesia, has confirmed its plan to enter the industrial gas turbine engine market in a fight for survival from the impacts of the COVID-19 pandemic. GMF spokesperson Rian Fajar Isnaeni said the company would simultaneously develop its maintenance, repair, and overhaul services for the aviation as well as non-aviation sectors. “The business development plan for the non-aviation sector is the maintenance and repair of industrial gas turbine engines,” Rian explained. The company targets 10 percent of total revenue to come from the non-aviation sector.