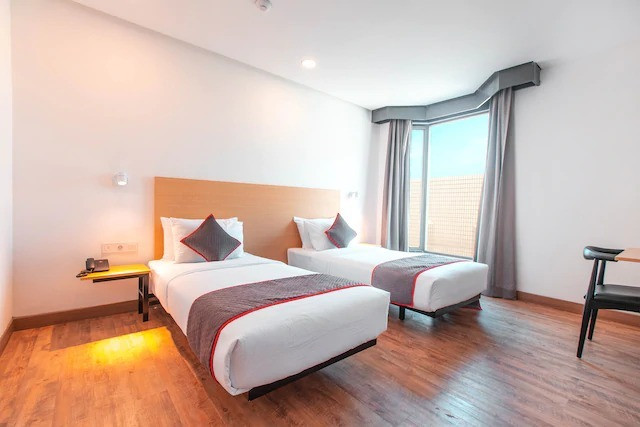 An OYO hotel room in Jakarta. Budget hotel aggregator OYO has announced it has partnered with local e-wallet platforms GoPay and OVO to settle refunds swiftly amid an increase in hotel cancellations as people refrain from travelling during the pandemic. (OYO Hotels and Homes Indonesia/-)

The government has been finalizing the procurement of potential COVID-19 vaccines from three different Chinese producing companies, namely Cansino, Sinopharm and Sinovac. The three companies, according to a written statement from the Office of the Coordinating Maritime Affairs and Investment Minister’s website, have agreed to provide the vaccines for Indonesia as early as November this year.

On a different occasion, Terawan explained the vaccine would be prioritized for frontline medical workers and security forces, as well as those working in the public services sectors. Terawan added that the vaccine costs for recipients of contribution assistance (PBI) and low-income frontliners will be borne by the government.

President Joko “Jokowi” Widodo said the country had successfully reduced its COVID-19 fatality rate to 3.55 percent from 3.77 percent two weeks ago. The President, however, also said that the country’s current COVID-19 fatality still topped the global average, which stands at 2.88 percent.

Jokowi further asked the national COVID-19 committee to prioritize handling in the 12 regencies or municipalities with more than 1,000 active cases or contribute to 30 percent of national active case in the next two weeks.

The Jakarta Police has named 43 out of thousands of arrested protesters as suspects for reportedly inciting a riot during protests against the newly passed Job Creation Law in the capital on Thursday.

Jakarta Police chief Insp. Gen Nana Sujana explained that his party had arrested 1,192 protesters after Thursday’s rally, 135 of whom were then further investigated.

“Based on the investigation, we have named 43 of them as suspects,” Nana said on Monday.

Nana added that most of the arrested protesters were students.

Nationwide rallies against the passing of the controversial jobs law have turned violent in several parts of the country, such as Jakarta, Medan in North Sumatra, Bandung in West Java, Surabaya in East Java, Yogyakarta, Makassar in South Sulawesi and Kendari in Central Sulawesi.

Activists and critics have condemned excessive measures by the police in handling the rallies, saying they should safeguard and protect the people’s right to freedom of expression.

Coal will no longer be exempted from value-added tax as stipulated in Article 4A of the newly passed omnibus Job Creation Law. Coal miner PT Bumi Resources spokesperson Dileep Srivastaa said the company was still reviewing the impact of the change in VAT policy, as well as the zero percent relaxation on coal royalty payments. “But the most important thing is the contract change from the previous contracts of work (PKP2B) into special mining permits (IUPK) for Arutmin Indonesia and Kaltim Prima Coal,” Dileep added. Arutmin spokesperson Ezra Sibarani said the company was still waiting for the final draft of the omnibus law. Likewise, Indonesian Coal Mining Association (APBI) executive director Hendra Sinadia said the association was still waiting for the final draft.

Following the House of Representatives’ decision to pass the omnibus Job Creation Law, the government is preparing a presidential regulation (Perpres) to establish an agency to accelerate public housing provision. The Public Works and Housing Ministry’s housing provision director general, Khalawi Abdul Hamid, said the establishment of the agency was already mandated by Law No. 1/2011 on housing and housing areas, as well as Law No. 20/2011 on apartments. The omnibus law will strengthen the mandate to establish the agency, he added. Khalawi also confirmed that the agency formation would not replace state-developer Perumnas.

State-owned construction company PT Rekayasa Industri (Rekind) has announced its withdrawal from the Cirebon-Semarang industrial gas pipe construction project after delaying the commencement for 14 years. Rekind won the auction for the project back in 2006. Downstream Oil and Gas Regulatory Agency (BPH Migas) committee member Jugi Prajogio said the withdrawal decision was made by the new board of directors. The new board has questioned the economic value of the project because the volume of gas delivered under the current projection will not be enough to cover the project’s investment cost. Previously, BPH Migas head Fanshrullah Asa said the project would be completed in 24 months after its ground-breaking on February 7. Nevertheless, Rekind failed to make any progress seven months after the ground-breaking.

Budget hotel aggregator OYO has announced it has partnered with local e-wallet platforms GoPay and OVO to settle refunds swiftly amid an increase in hotel cancellations as people refrain from traveling during the pandemic. OYO Indonesia country head Agus Hartono Wijaya said the e-wallet platforms were expected to simplify and speed up the refund and booking payment process, as well as reducing the need for physical contact at reception desks when customers make transactions. Agus explained that consumers could expect refunds via e-wallets to be settled within a week, compared with bank transfers, which can take up to 60 days. He added that OYO had settled 99.4 percent of all refund requests within the last six months.