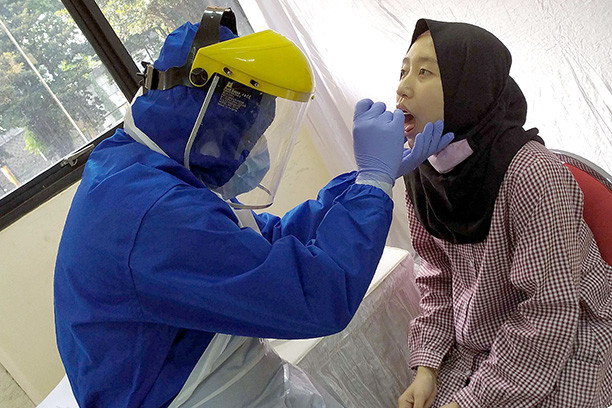 National COVID-19 task force spokesman Wiku adisasmito said that Indonesia was still facing a critical condition as the number of COVID-19 cases had reached 100,303 on Monday, with the government recording 1,525 new infections on that day.

“People should not perceive the ranking as a safe indicator. We are still in a crisis,” said Wiku.

According to data released by the Health Ministry on Monday, 57 more people have died of the disease, bringing the death toll to 4,838. The total number of recovered patients, however, has also increased to 58,173.

Meanwhile, Jakarta recorded its highest one-day spike since the first confirmed cases were detected in the city in March with 467 new confirmed cases, bringing the total number to 19,592.

Bareskrim chief Comr. Gen. Listyo Sigit Prabowo said Prasetyo had been charged under Articles 221, 263 and 426 of the Criminal Code (KUHP) for his role in hampering the investigation, forgery and releasing fugitives.

Prasetyo, for one, signed a travel letter that allowed Djoko to fly from Jakarta to Pontianak, West Kalimantan. Prasetyo’s letter also enabled Djoko to return to Jakarta in his capacity as a consultant. Furthermore, Prasetyo had also reportedly assisted Djoko in acquiring a COVID-19-free letter, which is a requisite for someone who wants to travel amid the ongoing pandemic.

Sigit added that Bareskrim’s special team would still develop the case and find new suspects that were involved in facilitating Djoko’s escape.

A number of factions at the House of Representatives have agreed to implement electronic vote recapitulation (e-Recap) in this year’s region head elections slated for December. Lawmakers, however, added several preconditions in its implementation.

Indonesian Democratic Party of Struggle (PDI-P) lawmaker Arif Wibowo said that his party had only agreed to the use of e-Recap in addition to the traditional vote-counting method, as stipulated in the Regional Elections Law. Arif added that the use of e-recap would decrease the risk of fraud.

A group of 57 Catholic priests from across Papua have demanded that the government put a stop to the “forced continuation of special autonomy [Otsus] in Papua”.

The spokesperson of the group, John Bunai, a Catholic priest from the Papuan capital Jayapura, urged the government, policymakers and local administrations in a press conference last week to evaluate how the Otsus Law was enforced and to assess whether it had helped improve the lives of Papuans.

As the funding will stop next year, the House of Representatives has included the deliberation of Papua’s special autonomy status in this year’s National Legislation Program (Prolegnas) priority list — the bill of which was proposed on the government’s initiative. Home Minister Tito Karnavian said the government was considering extending Papua’s special autonomy status, as reported by kompas.com. In January, Tito urged lawmakers to immediately deliberate the bill on the grounds that the Otsus funds would accelerate Papua’s development and help resolve the issue of discrimination in the province.

“What the government has forced [on Papua] are [special autonomy] funds. But what Papuans need is not simply funds; they instead need their lives, education, safety, health and welfare. That’s what they need, not billions of [rupiah],” John told The Jakarta Post on Friday evening.

John said the group of priests was not affiliated with any political organization, and that their sole purpose was to fight for humanity and truth, because they, as native Papuans, had witnessed a long history of violence against indigenous Papuans over the years.

As Indonesia works on restoring its economy, concerns mount over dozens of infection clusters emerging in commercial office spaces that lack ventilation or room for social distancing and are lax with health protocols.

Data from the Jakarta Health Agency collated by the COVID-19 task force shows that as of Sunday, the capital has reported 68 distinct office clusters.

The task force is still verifying and updating data on the number of confirmed cases but concluded that there had indeed been a rise in transmissions in work settings compared to when the city had yet to transition from large-scale social restrictions (PSBB) on June 4.

The government will place Rp 11.5 trillion (US$793.82 million) in seven regional development banks to stimulate the economy. The recipient banks are expected to increase credit distribution twofold with low interest rates in order to help businesses go through the COVID-19 pandemic.

The government said the funds should be used only to provide working capital loans for businesses and should not be used to buy government sovereign debt papers (SBN) or foreign exchange.

The government had previously disbursed Rp 30 trillion to the State-Owned Banks Association (Himbara) in a similar scheme to improve loan access to businesses as an effort to revive the economy.

A newly proposed Presidential Regulations (Perpres) on purchasing new and renewable rnergy may offer some incentives for developers of geothermal power plants. Referring to Article 20 (3) of the draft, the proposed regulation includes incentives in the form of compensation for geothermal exploration costs. Meanwhile, Article 31 (2) regulates that the compensation for exploration and infrastructure development activities will be given after the commercial operation date of the project.

The scheme to develop geothermal working sites will be similar to the cost recovery scheme for oil and gas blocks. This means that the government will reimburse the operational costs used by developers in conducting explorations on geothermal sites.

Indonesian Geothermal Association (API) head Priyandaru Effendi said the developers were waiting for clarification on the cost reimbursement mechanism that will be regulated either through the Perpres or energy and mineral resources ministerial regulation. Developing geothermal energy is difficult because the developer bears all of the exploration risks.

Therefore, the prospect of gaining incentives will be appealing for developers, added Priyandaru.

The government is planning to hold a press conference explaining the contents of the new Perpres on Tuesday.

Jokowi said optimizing spending was highly important to boost the public’s purchasing power and to recover the economy. The government has so far disbursed 19 percent or Rp 136 trillion (US$9.39 billion) from the total Rp 695.2 trillion in PEN stimulus.

Furthermore, the President said that priority would be given to healthcare treatments in eight provinces, including Jakarta, West Java, Central Java, East Java, North Sumatra, South Sulawesi, South Kalimantan and Papua, which have the highest number of COVID-19 cases.

The response team’s executive secretary, Raden Pardede, said spending was partly constrained by officials who were afraid of making mistakes in processing the funds or high-level officials who were unsure about relaxing regulations. He promised to show improvements in the next one or two months by revising the regulation and easing administrative procedures to address the issues.

The Public Works and Public Housing Ministry is speeding up the bidding process for the multilane free-flow (MLFF) project and hoping to wrap up the process before the end of the year. Indonesia Toll Road Authority (BPJT) head Danang Parikesit said the bidding process for the Rp 2.9 trillion (US$200.18 million) project had entered the prequalification stage with the deadline for document submission set for the first week of August.

MLFF will be implemented in several stages along 1,713 kilometers of lanes. Before its planned full operation in 2022, the government will map out the location for a pilot run based on regional preparedness. Greater Jakarta is most likely to be the site for this pilot run before it is expanded to Trans-Java toll road sections.

This project is part of the government’s strategy to increase electronification in three aspects, namely social aid, local government transactions and transportation. By incorporating the Global Navigation Satellite System (GNSS), which can detect each passing car, MLFF could smoothen contactless transactions and reduce traffic jams on toll road gates. The current project is designed by Hungarian company Roatex Ltd. Zrt. and the bid has gathered interest from more than 30 applicants per April.

Aside from speeding up the tender for MLFF, the government is looking for investors for five toll road projects, including the Solo-Yogyakarta section, Cileunyi-Garut-Tasikmalaya (Cigatas) section, Patimban Port access toll road, Bogor-Serpong section via Parung and two overpasses in Cikunir.