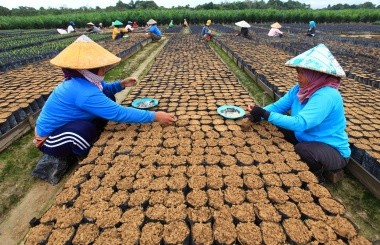 Palm oil companies are currently under scrutiny from Indonesia’s independent business watchdog for their lack of commitment to comply with the partnership regulation that requires them to allocate 20 percent of their plantation area to plasma farmers. (The Jakarta Post)

GENERAL NEWS AND HEADLINES
Jokowi to get firmer grip on house
The Jakarta Post, headline

As the dust settles following the 2019 general election, President Joko “Jokowi” Widodo is set to have an easier start to his second term compared to when he first took office in 2014. Quick-count results say the President has secured a second term and his supporting political parties are also thought to have won more than half of the seats in the House of Representatives.

Five of the parties backing Jokowi — the Indonesian Democratic Party of Struggle (PDI-P), the Golkar Party, the National Awakening Party (PKB), the NasDem Party and the United Development Party (PPP) — are set to make it into the House, with a total vote share also of 54 to 55 percent. The number of House seats allocated to each party will depend on how they did in each of the country’s 80 electoral districts, but Saiful Mujani Research & Consulting (SMRC) chief researcher Djayadi Hanan estimated that Jokowi’s coalition would get between 311 and 365 seats, or 54 to 63 percent of the 575 seats available.

The communications director of Joko “Jokowi” Widodo and Ma’ruf Amin’s national campaign team, Usman Kanson, has welcomed calls for a meeting between Jokowi and Ma’ruf and rival candidate pair Prabowo Subianto and Sandiaga Uno after the presidential election. According to Usman, Jokowi has attempted to defuse tensions between the two camps by sending Coordinating Maritime Affairs Minister Luhut Pandjaitan to meet Prabowo on Sunday and start the reconciliation talks. However, the meeting between Luhut and Prabowo failed to materialize.

Prabowo-Sandiaga national campaign team spokesperson Arief Poyuono, however, said there was no urgency for a reconciliation.

“What’s the aim of the reconciliation? There is no conflict, unrest, commotion or clash [between the two camps],” Arief said.

He argued that instead of attempting a reconciliation, the two camps should focus on solving the alleged fraud that occurred during the election.

The official results of the 2019 elections are still a month away from release, but the composition of parties securing seats on the Jakarta Council (DPRD) is already taking shape. According to the official counts as of Wednesday morning, the Indonesian Democratic Party of Struggle (PDI-P) leads the race with 19.37 percent of votes, followed by the Prosperous Justice Party (PKS) with 17.72 percent and the Gerindra Party with 14.94 percent.

The emergence of the Indonesian Solidarity Party (PSI), which according to pollsters is the fourth most-voted-for party in Jakarta on the House level in this year’s elections and which has pledged to become a “constructive opposition” to the administration of Governor Anies Baswedan, would add strength to the opposition coalition in the council amid reports of a crack in the PKS-Gerindra coalition. The two parties engaged in a prolonged tug of war last year while selecting candidates to replace former deputy governor Sandiaga Uno, who resigned to run in the presidential election with Gerindra chairman Prabowo Subianto.

The Gerindra faction chairman on council, Syarif, said a meeting with the PKS would be held immediately after the election to evaluate its support for the governor.

“There will be new members [on council from Gerindra] who will bring in new ideas and perspectives. So, we will evaluate everything,” he said, insisting that the party would keep backing the former education minister, at least until his gubernatorial term ends in 2022.

Meanwhile, the PKS also denied there was trouble in the coalition.

“We have never said anything about [leaving the coalition],” said the head of PKS Jakarta’s sharia council, Abdurrahman Suhaimi. “There is no such discourse [happening] as we are currently waiting for the official results of the election.”

The General Elections Commission (KPU) is increasing security of its website to anticipate threats of hacking and data theft. The move aims to prevent any attempt to undermine and delegitimize the KPU and its election results.

The KPU has been recapitulating votes from the April 17 general elections manually, as mandated by the Election Law. However, to inform the public about the progress of the recapitulation process, the commission shares the information online and real time.

The KPU is involving the National Police and the National Cyber and Encryption Agency (BSSN) in the data protection efforts.

The Corruption Eradication Commission (KPK) is confident that PLN president director Sofyan Basir will comply with the law now that investigators are probing his role in a bribery case involving the state-owned electricity company. Sofyan has been named suspect in the case, which centers on the construction of a coal-fired power plant (PLTU) in Riau.

Sofyan is currently in France.

“Both PLN and state-owned enterprises (BUMN) have affirmed that [Sofyan] will be cooperative,” said KPK spokesperson Febri Diansyah, assuring that that KPK investigators would summon Sofyan in the near future.

Sofyan allegedly accepted a bribe that also went to former deputy chairwoman of the House Commission VII, Eni Maulani Saragih, and former social affairs minister Idrus Marham from businessman Johannes Budisutrisno Kotjo. Johannes bribed Sofyan, Eni and Idrus in order to win a tender to build the PLTU. Evidence of Sofyan’s involvement in the bribery case was accumulated from an investigation and testimony of Johannes, Eni and Idrus.
BUSINESS AND ECONOMICS NEWS AND HEADLINES
Sofyan’s graft case may affect electricity projects
Kontan, headline

The government’s 35,000-megawatt (MW) electricity project might be delayed after state-owned electricity company PLN president director Sofyan Bashir was named a suspect in a graft case by the Corruption Eradication Commission (KPK) on Wednesday.

Sofyan was officially named a suspect after the KPK claimed to have found evidence that he received kickbacks from Blackgold Natural Resources Ltd., the winner of the tender for the development of a power plant in Riau.

Sofyan left several unfinished power plant projects to the PLN’s board of directors. Based on PLN data as of January 2019, several projects with a combined capacity of 1,383 MW have just begun procurement, one project with a capacity of 954 MW is being planned and several other projects with a total capacity of 9,507 MW are in their early development stages.

Sofyan’s status as suspect has reportedly caused an outcry within the PLN board of directors, the members of which are concerned over how the company would be able to make decisions about ongoing projects without a daily operational chief, although a legal regulation that governs the operation of the board of directors without a president director is in place.

Economists are confident that Bank Indonesia (BI) would again hold its benchmark interest rate steady in its monthly meeting this week.

Juniman said he believed that the central bank’s decision to keep the interest rate at the current level was based on the country’s relatively low inflation rate rather than external factors such as the United States Federal Reserve’s benchmark rates.

National flag carrier Garuda Indonesia recorded a US$19.7 million profit in the first quarter of 2019 after suffering financial losses for almost four years. The first quarter profit was a reverse of the $64.3 million loss recorded in the same period last year.

Garuda’s surge of profits was mainly due to the 12 percent increase in gross revenues to $1.09 billion during the first quarter.

The airline’s corporate secretary, M. Ikhsan Rosan, said during a press conference on Wednesday that revenues from scheduled flight services grew by 11.6 percent to $924.9 million in the first quarter this year, while ancillary revenues and income from subsidiaries increased by 27.5 percent to $171.8 million.

Rosan also said that some members of the board of directors and commissioners were replaced during the recent annual shareholders meeting. The meeting kept I Gusti Ngurah Askhara Danadiputra as Garuda’s president director and removed Agus Santoso, Dony Oskaria, Chairal Tanjung, Muzaffar Ismail and Liky Alfirman from the board of commissioners. However, Chairal Tanjung’s position was changed to make him sole operating commissioner.

Finance Minister Sri MulyaniIndrawati has pinned high hopes on technological developments to boost the role of women in the economy.

The finance minister also called for the implementation of gender sensitive policies to foster a more equal work environment.

“Being women or mothers, [female workers] are by default expected to take care of the family and children when at the same time they want to pursue their [careers]” said Sri Mulyani. “Technology can solve that problem. For example, through e-commerce, which can be run from home.”

Sri Mulyani also highlighted the stark contrast between men’s and women’s participation in the workforce in Indonesia despite having a balanced gender composition, adding that women often had to navigate negative stigma when they wanted to make progress in male-dominated jobs.

Statistics Indonesia data shows men’s participation in the workforce was 82.69 percent in August 2018, while for women it was 51.88 percent.

Palm oil companies are currently under scrutiny by Indonesia’s independent business watchdog for their lack of commitment to complying with the partnership regulation that requires them to allocate 20 percent of their plantation areas to plasma farmers.

This partnership was enacted 12 years ago under Agriculture Ministerial Regulation No. 26/2007 on the guidelines for plantation business licensing, but farmer associations and environmental groups say the regulation has not been fully enforced.

Business Competition Supervisory Commission (KPPU) commissioner Guntur Saragih said at a press conference on Tuesday that it was investigating violations of the regulation by large oil palm plantations. Law No. 20/2008 on SMEs and Government Regulation No. 17/2013 on SMEs as the guidelines for the implementation of the 2008 law on SMEs, Guntur said, gave the KPPU the right to investigate whether an oil palm plantation (with land size starting at 250 hectares) had compiled with the requirement to allocate 20 percent of its plantation area to plasma farmers.