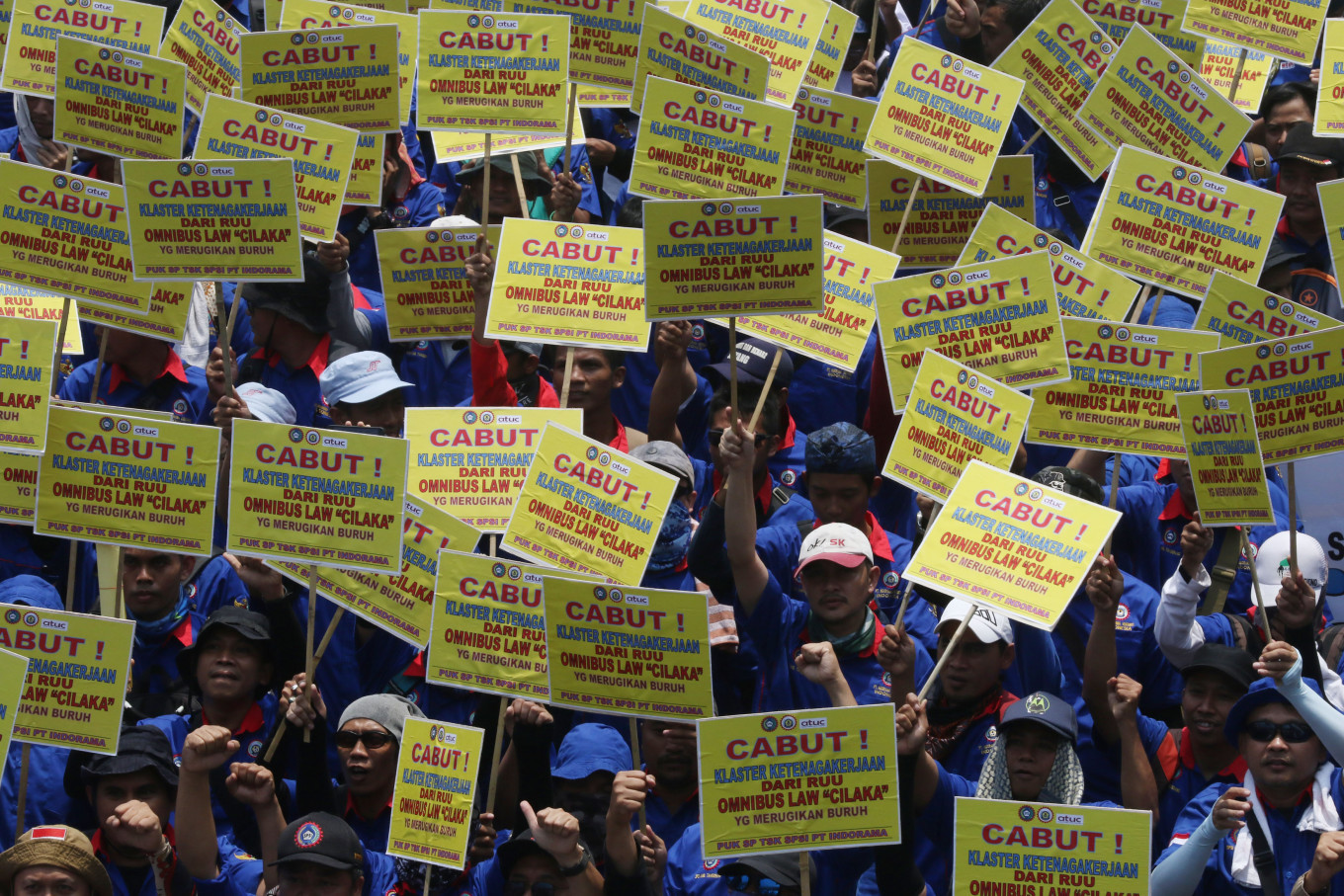 Workers who are members of the Confederation of Indonesian Trade Unions (KSPI) held an action to reject the Omnibus Law Cipta Karya in front of the Parliament Building, Senayan, Central Jakarta, Wednesday (02/12/2020). The mass of workers threatened a mass strike if the Parliament passed the Omnibus Law on Employment Copyright. - JP / Dhoni Setiawan / vja / 20(JP/Dhoni Setiawan)

The government will be opening up opportunities to repatriate the children of Indonesian sympathizers of the Islamic State (IS) group who are stranded overseas in Syria, despite the government’s initial rejection of repatriating any Indonesian nationals who had joined IS. Discussions on repatriating children were held in a closed-door meeting between President Joko “Jokowi” Widodo and his ministers.

Presidential Chief of Staff Moeldoko said the government was attempting to verify the data of those who claimed to be Indonesian nationals and had taken their children abroad. “[The data] needs to be verified first. It is possible [to repatriate] very young orphaned children,” Moeldoko said on Wednesday.

Moeldoko explained that data verification was important because the Indonesian nationals who had joined IS were not only stranded in Syria but also scattered in other countries such as Afghanistan, Turkey, Pakistan and the Philippines. According to United States Central Intelligence Agency (CIA), 689 Indonesian citizens have joined IS, including women and children.

Amid fears over the global impact of the coronavirus disease, recently named COVID-19, which has killed more than 1,100 people on mainland China, Chinese President Xi Jinping called President Joko “Jokowi” Widodo on Tuesday evening to reassure him that China was more than capable of handling the virus and to praise Indonesia for its cooperation thus far.

According to a report issued by the Chinese Foreign Ministry, Xi made a series of phone calls to Jokowi and other strategic partner leaders. Xi stressed that containing and handling the disease was the top priority of the Chinese government. “We are sure that China will successfully overcome this epidemic and come out stronger and more prosperous,” Xi told Jokowi.

Xi also promised that China would continue to work closely with Indonesia and other countries through openness and transparency in order to protect regional and global interests. In response, Jokowi has expressed support for China, claiming that Indonesia is ready to send any assistance should China require support to speed up the handling of the COVID-19 outbreak.

The discussion centered on improving the quality of democracy by initiating systemic and institutional changes as it is believed that political parties in Indonesia tends not to carry out their intended functions.

Valina said since the 2004 elections, the Indonesian democratic system has faced a multi-party reality that is neither ideal nor conducive for a democratic society. Furthermore, increasing the legislative threshold during each election had no impact on narrowing the number of parties. This was shown in the results of the 2019 elections, in which a total of nine parties passed the legislative threshold even after the threshold had been increased to 4 percent from its previous 3.5 percent.

Furthermore, Valina also explained that parties would justify any means in order to pass the ever-increasing threshold, such as by recruiting legislative candidates that possess social capital despite lacking the capacity for leadership.

Senior Corruption Eradication Commission (KPK) investigator Novel Baswedan received an anticorruption award from a Malaysian foundation called the Perdana International Anti-Corruption Champion Fund (PIACCF). The award was bestowed upon Novel as a form of appreciation for his efforts, courage, dedication and commitment to anticorruption measures.

“This award is a form of support and respect for all who choose to fight against corruption, both in Malaysia, Indonesia and throughout the world,” Novel said in a written statement. According to Novel, the award serves as a reminder that corruption eradication is not simply an issue specific to individual countries but a shared global issue.

The government submitted on Wednesday the controversial omnibus bill on job creation to the House of Representatives but without releasing the document for public scrutiny, as thousands rallied outside the House complex against the bill’s potential detrimental effect on labor rights.

The omnibus bill on taxation has also been submitted to lawmakers, but again no official draft has been made available as yet for public discussion.

“The closed nature of the government’s drafting of the omnibus bill is difficult to  comprehend,” said Indonesian Parliament Watch (Formappi) analyst Lucius Karus.

The omnibus bill on job creation is expected to cut red tape, attract more investment and boost the country’s economic growth, which fell to a three-year low of 4.97 percent in the fourth quarter of 2019. Comprising 174 articles in 15 chapters, it will amend more than 1,000 articles in 79 prevailing laws, including the Labor Law.

Coordinating Economic Minister Airlangga Hartarto said his ministry had formed a team to discuss the omnibus bill deliberations and to ensure all stakeholders were consulted. Members of the team include government officials, businesspeople and labor representatives.

The government has mostly been tight-lipped over sensitive labor issues in the bill, such as severance pay and the minimum wage, sparking transparency concerns among economists and labor groups alike.

Several labor groups including the Confederation of Indonesian Trade Unions (KSPI) and the Congress of Indonesia Unions Alliance (KASBI) rejected the invitation to join such a team, while thousands of workers under the All-Indonesia Workers Union Confederation (KSPSI) protested in front of the House on Wednesday.

KSPSI leader Andi Gani Nena Wea said she was still unaware about the formation of any such team, saying: “We will examine the team’s main tasks, and if it is only to legitimize the bill, of course we will refuse.”

Coordinating Economic Affairs Minister Airlangga Hartarto submitted on Wednesday the omnibus bill on job creation to the House of Representatives for further deliberation before being passed into law.

Airlangga said the bill would amend 79 prevailing laws and that it would comprise 15 chapters and 174 articles. “We hope the House will immediately deliberate this bill.”

Meanwhile, House Speaker Puan Maharani said the seven commissions would be involved in the deliberation of the bill.

Airlangga also said the Manpower Ministry would invite 10 major labor unions for the deliberations, to make sure that the unions’ interests were accommodated

Meanwhile, Confederation of Indonesian Trade Unions (KSPI) spokesman Kahar S. Cahyono said the KSPI would refuse taking part in the bill deliberation, saying that labor unions had not been involved in the drafting of the bill from the beginning.

Kahar said Indonesia had hundreds of labor unions and dozens of union confederations. He questioned why the government would only invite 10 unions.

Access to Indonesia’s four main seaports for exports and imports have been below par, compared to those in other countries, resulting in higher costs for the transportation of goods to and from the ports.

The four main ports are Tanjung Priok in Jakarta, Belawan in Medan, North Sumatra, Tanjung Perak in Surabaya, East Java, and Makassar Port in South Sulawesi. Access to these ports are only by road and railway for Jakarta. In other countries, they have other access points, such as toll roads and river canals.

Indonesian Logistics Association chairman Zaldi Ilham said, “Because of limited access to the ports, the cost of transportation has become expensive and this reduces our competitiveness.”

Transportation Minister Budi Karya Sumadi acknowledged that the competitiveness ranking of access to ports in Indonesia was still below those in neighboring countries, remaining at 80. He promised to improve access to ports and improve the rank to 70.

B100 should not rely on palm oil
Investor Daily, Headline

The government has successfully implemented the palm-oil blended B20 biodiesel policy, and it will increase the mandatory palm oil blend into biodiesel to 30 percent, or B30, next year and B40 by 2021. The government also aims to achieve B100 biodiesel.

However, Institute for Development of Economic and Finance (Indef) deputy director Eko Listiyanto said the mandatory B30 biodiesel policy was taken to solve the problem of palm oil oversupply in Indonesia. However, when the government pursues B100, it would drain palm oil and could endanger exports.

Therefore, he suggested that the government start finding new raw materials for biodiesel such as from coconuts and castor trees.

Indonesian Biodiesel Producers Association (APROBI) chairman Master Parulian Tumanggor said if the government went ahead with its B100 policy, it would need 35 million tons of palm oil per year. That would only be feasible when Indonesia’s palm oil output reached over 60 million tons per year.

The Maritime Affairs and Fisheries Ministry’s plan to revise 29 regulations to allow the export of lobster seeds is still drawing controversy, as the plan is considered a short-term policy to get foreign exchange, while disregarding long-term interests of lobster catchers, especially small-scale fisherfolk.

Federation of People- and Ecology-Based Legal Reformation advocacy staff Mega Dwi Yulyandini said the ministry’s plan would eventually negatively affect the livelihoods of  fisherfolk who relied on lobster. Therefore, the federation would ask relevant parties to reject the ministry’s plan.

Dedy Sopian, a lobster breeder in Ketapang Raya, Lombok, West Nusatenggara, said the government’s plan to export lobster seeds would kill lobster businesses like his. Therefore, he suggested that the government help lobster breeders so that Indonesia’s lobster production would continue to increase and eventually beat Vietnam’s output.