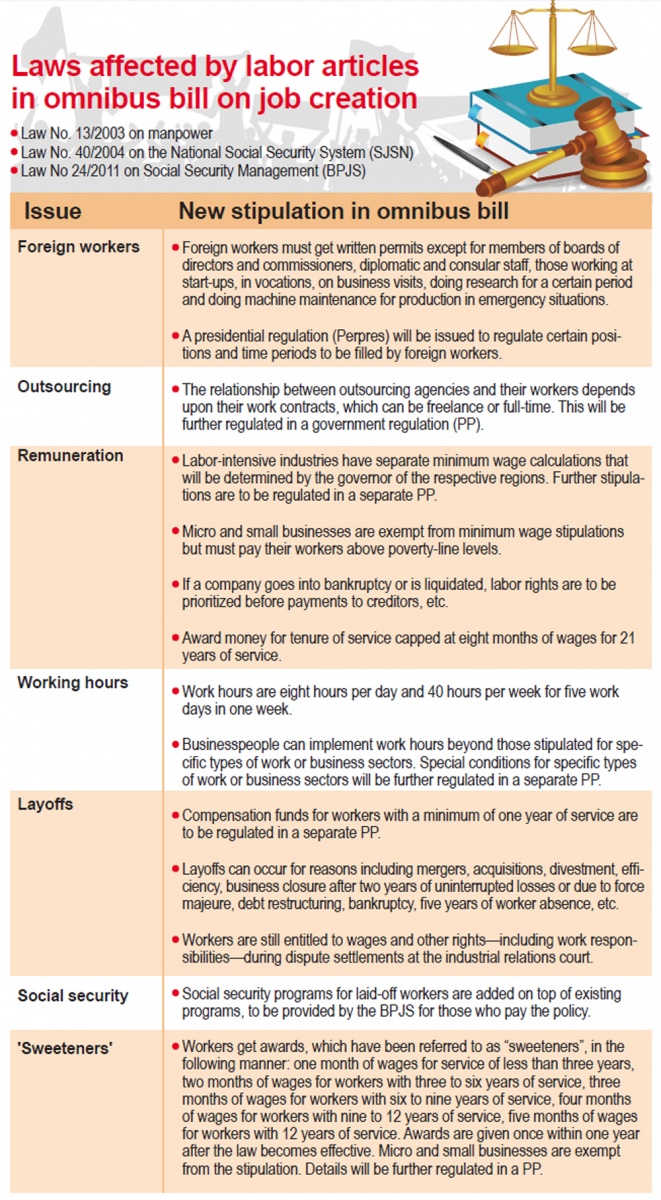 The government is set to reform the country’s labor regulations through a sweeping omnibus bill on job creation, in the face of workers’ objections and criticism from economists and businesspeople over several of the proposed bill’s provisions.

According to a draft obtained by The Jakarta Post on Wednesday, the government-initiated bill will ease foreign-worker recruitment, cap redundancy payments for laid-off workers and provide a bonus, described by some as a “sweetener”, for employees.

The government will also relax outsourcing requirements and open the possibility for outsourcing agencies to hire workers for various jobs.

It also introduces a new regional minimum wage that takes into account a region’s economic growth and allows labor-intensive industries to have a separate minimum-wage calculation determined by the governor of the respective provinces.

Several labor unions have voiced their opposition to the bill, saying it will undermine labor rights.

As President Joko “Jokowi” Widodo wants the deliberations to conclude within 100 working days after the bill’s submission, government officials have scrambled to reach out to all related stakeholders. They formed a coordination team consisting of labor, business and government representatives on Feb. 7 and held the first meeting on Thursday.

The meeting saw divisions within the ranks of the labor unions as the Confederation of Indonesian Trade Unions (KSPI) and the Congress of Indonesia Unions Alliance (KASBI) refused to join the team while Gekanas and the All-Indonesia Workers Union Confederation (KSPSI), the largest labor union in the country, agreed to join.

KASBI chairwoman Nining Elitos said during the meeting that the lack of transparency in the bill’s drafting process was not democratic and the bill was unfair to workers.

Several institutions grouped under civil coalition Clean Up Indonesia have deemed many articles in the omnibus bill on job creation as problematic. The coalition specifically scrutinizes the bill’s attempt to relax criminal charges for those who harm the environment.

Civil society group Auriga Nusantara researcher Syahrul Fitra said the coalition had found 11 serious problems in the omnibus bill on job creation. In particular, Article 23 No. 37, which amends articles 98 and 99 on environmental protection, stipulates that those who harm the environment will no longer receive criminal sanctions but merely administrative fines.

Sayhrul also noted problems in other articles, including in the nullification of Environmental Impact Analysis (Amdal) requirements. Instead of an Amdal, investors and business players only have to hire a certified expert in doing their business.

The Health Ministry’s Disease Control and Prevention Directorate General secretary, Achmad Yurianto, said the observation of the 238 Indonesian citizens would effectively end on Friday. One of the options considered by the government is to fly home the quarantined people to Halim Perdanakusuma Airport, Jakarta.

Following the National Mandate Party’s (PAN) chaotic national congress, during which brawls and violent disputes among party members occurred, reelected PAN chairman Zulkifl Hasan has been urged to embrace and accommodate all of PAN’s internal actors, including those who opposed him in the party’s recent chairmanship race.

PAN senior politician Soetrisno Bachir has also asked all party members to reunite following PAN national congress. According to Soetrisno, by uniting all PAN members, it remains possible for PAN to be among the top three parties in the 2024 general election. Soetrisno, thus, urged Zulkifli to consolidate the party. “Whoever gets elected as PAN chairman must carry out reconciliatory moves in order to ask all party members to unite,” said Soetrisno.

Meanwhile, another PAN politician, Viva Yoga Mauladi, affirmed that Zulkifli would not dismiss the party’s controversial patron, Amien Rais, following his reelection. According to Viva, despite the different views of Zulkifli and Amien, which became apparent in the party’s leadership race as Amien decided not to endorse Zulkifli’s reelection bid, Zulkifli will not remove Amien from the party.

Coordinating Political, Legal and Security Affairs Minister Mahfud MD said the revocation of the citizenship of Indonesian nationals who had left the country to join the Islamic State (IS) group would follow legal procedures. According to Mahfud, President Joko “Jokowi” Widodo will issue a presidential decree to officially revoke the Indonesian IS sympathizers’ citizenship.

The job creation omnibus bill centralizes the regional government’s authority to issue licenses to facilitate investment in almost all business sectors, from mining, marine energy, seafaring, aviation, construction, agriculture and plantation, among others.

The government submitted the controversial omnibus bill on job creation to the House of Representatives on Wednesday, marking a milestone that will kick start deliberations on labor reforms that are intended to woo investors, boost economic growth and create jobs.

Some of the key highlights of the bill, a draft of which has been obtained by The Jakarta Post, cover issues related to foreign workers, wages, work hours, redundancy, social security, as well as a one-off extra payment as a “token of appreciation” for workers, which has been referred to as a “sweetener”.

In regard to foreign workers, Indonesia will open more chances for expatriates to work in the country, especially in start-ups. Outsourcing requirements would be significantly relaxed and open for hiring workers for various tasks, including freelance and full-time workers. The remuneration for minimum wage is unchanged from the existing regulation, but labor-intensive industries as well as micro and small businesses will not have to adhere to regional minimum wages.

A prevailing article that stipulates workers’ rights for paid leave under certain circumstances has been deleted, employers can implement work hours beyond stipulation for specific types of work or business sectors and compensation payments of a minimum of one year’s service and social security program are given for laid off workers.

Garlic supply has dropped as there was only 4 tons of garlic stock per day on Feb. 10 at Kramat Jati central market, from usually 22 tons per day on normal days. In addition, the State Logistics Agency’s (Bulog) garlic stock has reportedly declined in Bangka, Riau and Batang. The fall in garlic supply is reflected in the market price in the January – February period, which moved above the normal price line.

Agriculture Minister Syahrul Yasim Limpo said garlic stock had fallen to 84,000 to 120,000 tons, which is equal to around two months of 45,000 to 47,000 tons monthly needs. The minister believes there are distributors stockpiling their supply to manipulate prices to become higher.

The soaring price of garlic as the work of speculators had happened back in 2017 as they stockpiled along with the mandatory garlic planting for garlic importers as stipulated in Agriculture Ministerial Regulation No. 38/2017 on horticultural product import recommendations.

This year, the regulation issuance is stuck. Importers have yet to get the green light to import garlic, dwindling garlic supply further and shooting up prices. Indonesian Fruit and Vegetable Exporters and Importers Association chairman Hendra Juwono said the regulation had only been disseminated to 10 out of 30 companies per Feb. 7. If a regulation is not issued soon, it would give rise to stockpiling, resulting in higher prices.

As a result, many policyholders want to withdraw the funds from Kresna Life products, namely Protecto Investa Kresna and Kresna Link Investa (K-LITA). Both of these products promise fixed returns of around 7 percent to 9 percent per year.

To prevent large-scale fund withdrawals, the KONTAN source said that Kresna Life's management has decided to stop disbursing fund from the two products, by offering an extension or roll-over with the same interest and a minimum term of six months. Kresna life insurance’s total asset is worth Rp 8.01 trillion (US$585.32 million).

In addition to fear, securities accounts blocking instructed by the Attorney General’s Office (AGO) has also affected the operations of PT Asuransi Jiwa Adisarana Wanaartha (WanaArtha Life). The company has sent a letter to their policyholders informing the disruption of the company's performance due to the securities account blocking. WanaArtha now must wait for the AGO to end the blocking before they can finally make payments to the policyholders’ insurance claims.

According to international taxation director John Hutagaol, there are three benefits in implementing the TEA. First, the tax office can get clear and detailed information of taxpayers’ businesses, transactions, and/or other relationships with their partners overseas.

Second, it allows tax authorities to work together to reveal taxpayers’ tax issues to minimize the duplication of inspection activities, costs, time and the taxpayer’s burdens. The tax office can also get the taxpayers’ profile and comprehensive business activities. Last, the information can be obtained better, faster and in real time.

However, the TEA can be implemented if there is a significant potential tax revenue and meets the conditions for requesting additional information from tax authority in partner countries.