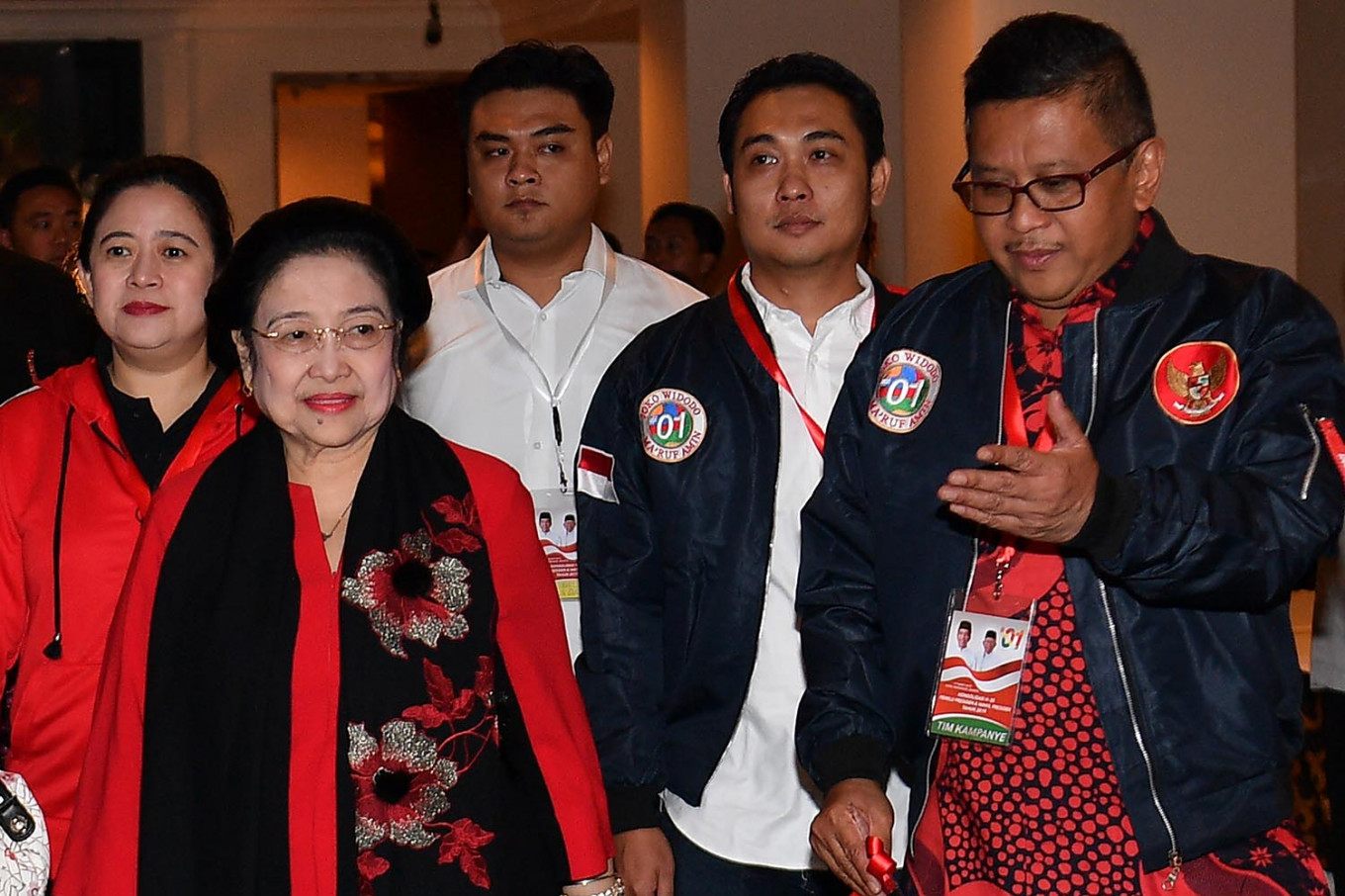 The Indonesian Democratic Party of Struggle (PDI-P) denied on Thursday allegations that it had done anything wrong in endorsing Harun Masiku as a legislative member, despite the candidate having been named a suspect in a bribery case.

The party’s legal team met with the General Elections Commission (KPU) to clarify that it had never submitted a request to replace Riezky Aprilia, another PDI-P candidate who was expected to fill the seat in the South Sumatra I electoral district, with Harun.

Instead, it had requested that the poll body accept  an “endorsement”, or Harun, based on a Supreme Court ruling that stipulates that in the event of the death of a legislative candidate, a political party has the right to recommend a new candidate.

“What was stated by the PDI-P through the letters [to the KPU] is in accordance with the legal provisions. We requested that the KPU endorse the elected candidate [Harun], not as a replacement,” the party’s legal team official Teguh Samudra said in a press conference after the meeting.

In light of a bribery case involving General Elections Commission (KPU) commissioner Wahyu Setiawan, the Elections Organization Ethics Council (DKPP) has asked the poll body to establish an internal control mechanism and supervision to prevent its members from breaching the code of ethics, such as through corruption.

DKPP member Ida Budhiati said the system could be built starting from small matters, like restricting KPU commissioners from a meeting that could lead to a conflict of interest or the involvement of a third party, in this case a KPU staff member, to participate in the meeting.

“So, if there are questions about the interests of certain parties, recordings and notes taken during the meeting can be used as evidence,” said Ida.

The National Commission on Human Rights (Komnas HAM) has accused the government of lacking the will to solve gross human rights violations in the past, as seen through Attorney General S. T. Burhanuddin’s hesitancy during a House of Representatives Law Commission hearing on Thursday, said Komnas HAM official Mohammad Choirul Anam.

Anam claimed that since taking office in 2014, President Joko “Jokowi” Widodo has displayed a reluctance to enforce the law against perpetrators of crimes against humanity. Anam said solutions to human rights violations are key to preventing the atrocities from recurring.

“This was a mandate of the reform movement.”

He said the rights body has asked the attorney general to reexamine evidence of human rights abuses known as the Semanggi I and II cases, which occurred in 1998 and 1999. He has also urged Burhanuddin to reopen the rights commission’s documents pertaining to the two cases.

Yasonna compared two children who grew up in a poverty-stricken area of Tanjung Priok and upmarket Menteng. He said the child who lived in Tanjung Priok would be more likely to exhibit criminal behavior than his peer due to the high poverty rate in Tanjung Priok.

“The minister of law, Yasonna, needs to be wiser in delivering statements. Criminals may come from poorer areas, but this should not be generalized,” Sahroni argued.

The country’s election agency is hoping a new commissioner will be chosen soon to replace Wahyu Setiawan, who was arrested by the Corruption Eradication Commission (KPK) in a bribery case pertaining to the replacement of a deceased election candidate.

The General Elections Commission (KPU) has made the process a priority following a ruling made the Election Organization Ethics Council (DKPP) that found Wahyu had violated its code of ethics, which led to a recommendation to dismiss him from his position.

KPU chairman Arief Budiman said on Wednesday that he had sent a letter to President Joko “Jokowi” Widodo regarding Wahyu’s arrest, as the law stipulates that the President is responsible for appointing and dismissing KPU commissioners.

Wahyu submitted a resignation letter immediately after the antigraft body named him a bribery suspect last week. Arief, however, argued that “as long as there’s no presidential decree that dismisses Wahyu from his position, he is formally still a KPU commissioner”.

Arief added that the KPU would appoint a replacement, who might be I Dewa Kade Wiarsa Raka Sandi, a member of the Elections Supervisory Agency (Bawaslu) in Bali, who won the eight-highest number votes during the selection of current commissioners.

Lending growth in Indonesia declined sharply to 6.08 percent in 2019 from 11.7 percent in 2018 amid a further drop in demand for new loans from corporate borrowers, according to the latest data issued by the Financial Services Authority (OJK).

The OJK initially set a lending growth target of between 12 and 14 percent at the beginning of 2019. However, the agency later lowered the growth target to between 9 and 11 percent in June 2019 due to weak demand amid a slowdown in the global economy.

As the demand for loans continued to decline, the OJK again cut the growth target to between 8 and 10 percent. However, the target could not be achieved despite the revision.

OJK chair commissioner Wimboh Santoso said the low lending growth was due to several fundamental factors such as the fact many local companies used offshore financing sources or foreign loans.

Indonesia is likely to see a small benefit from the phase-one trade deal between the United States and China as demand for commodities and the overall Chinese economy are expected to improve.

The trade deal, signed on Wednesday, addresses only a third of the tariffs that have burdened the world’s two largest economies and have fettered the global economy with weak demand, according to Bank Central Asia (BCA) chief economist David Sumual.

However, an uptick in commodities trade and a better economic situation for China — Indonesia’s main trading partner — will benefit Indonesia, a huge exporter of oil, gas, rubber, textiles and minerals, he added.

“Indonesia depends on the global cycle of commodities as well as economic activities in China. The trade deal will have a small impact on the country’s economy,” David told The Jakarta Post on Thursday.

The Attorney General's Office (AGO) summoned four more witnesses on Thursday as part of its investigation into alleged fraud in state-owned insurance company PT Asuransi Jiwasraya that caused the state to suffer Rp 13.7 trillion in losses.

In addition to the four people, the head of the AGO’s public information center Hari Setiono said two other witnesses had been summoned but that they had failed to attend without giving any notice.

In the near future, the AGO will summon the Indonesia Stock Exchange (IDX) director from 2002, Erry Firmansyah. However, the AGO did not disclose why Erry would be called in.

Deficit likely to linger in 2020 as trade frictions continue
The Jakarta Post, p.8

As 2020 begins, economists have expressed doubt that Indonesia will record a trade surplus as the weak global trade and import restrictions imposed by some trading partners will continue to affect the archipelago’s international trade.

Among them is Center of Reform on Economics (CORE) research director Mohammad Faisal, who projected that the country would still see a trade deficit of between US$1 billion and $2 billion in 2020, lower than the $3.2 billion trade deficit recorded last year and $8.7 billion throughout 2018 as recorded by Statistics Indonesia (BPS).

Faisal said that uncertainties in global trade, as a result of the trade war between the United States and China as well as import restrictions imposed by the European Union on Indonesia’s crude palm oil (CPO) would continue to impede the country’s international trade.

“Uncertainties in global conditions and tariff and nontariff barriers imposed by destination countries will affect our exports. Therefore, export growth will still be held back [in 2020],” Faisal said in late December.

India’s policy to restrict imports of refined palm oil and crude palm oil (CPO) from Malaysia due to Malaysian Prime Minister Mahatir Muhammad’s statement about Kashmir could be a good opportunity for Indonesia to further boosts its palm oil exports to the South Asian country.

However, the increase in CPO could disrupt the government’s policy to increase the mandatory use of crude palm oil (CPO) biodiesel blends from 20 percent to 30 percent beginning January 2020.

Institute for Development of Economics and Finance (Indef) economist Bhima Yudistira Adhinegara said the impact of the restriction imposed on CPO imports from Malaysia would be quite significant for Indonesia.

India, with an economic growth rate of 5 percent a year and a population of 1.3 billion is a big CPO market for Indonesia, he said.

According to him, priority should be given to CPO producers to increase their exports, which provide higher earnings, as the automotive industry is not ready for the B30 program.