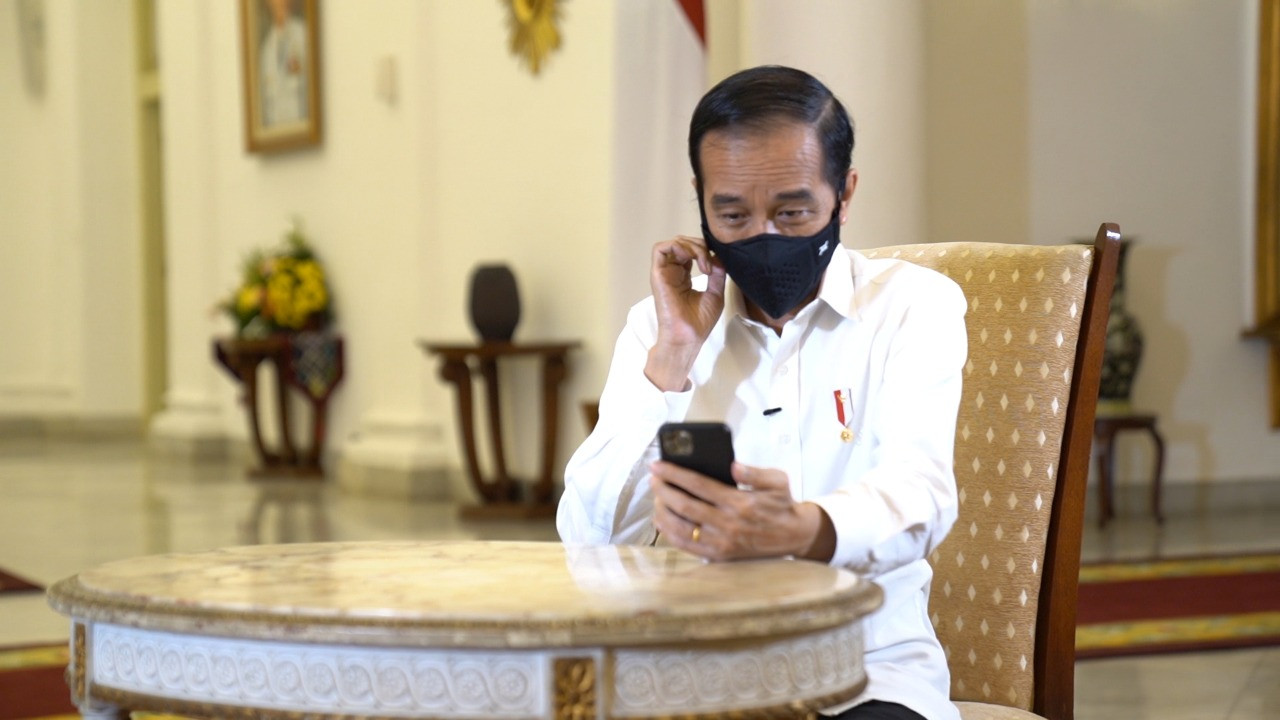 President Joko 'Jokowi' Widodo talks to a pulmonologist who works at a COVID-19 referral hospital in Jakarta through a video call on Sunday.(Courtesy of Presidential Press Bureau/--)

One year into his second term, President Joko "Jokowi" Widodo's administration has now been sidetracked by COVID-19 and his efforts to realize his campaign promises are being thwarted by his lackluster handling of the pandemic, a setback that has raised doubts about his performance in office.

In the public opinion survey, in which Kompas polled 529 respondents between Oct. 14 and 16, 46.3 percent of respondents were dissatisfied with Jokowi's performance in the job, while another 6.2 percent was very dissatisfied.

The latest job approval rating is a new low for President Jokowi, who began his second term on Oct. 20, 2019. In a public opinion survey released in late August, the Jakarta-based pollster Sjaiful Mujani Research and Consulting (SMRC) found that Jokowi's approval rating remained mostly unaffected by the COVID-19 crisis, with 67 percent of respondents saying that they were satisfied or very satisfied with Jokowi’s performance.

The job approval rating for the former Jakarta governor was 72 percent in March.

"This pandemic has affected some of [the President's] plans and programs [...] the government has to refocus and reallocate funding to prioritize programs and mitigation in health and socio-economic recovery," Presidential chief of staff Moeldoko said in a statement prefacing Jokowi's one-year progress report released on Tuesday.

Several experts and activists have criticized the government’s plan to issue a regulation on blocking social media accounts, deeming such a regulation an abuse of power and would violate principles of freedom of opinion and expression.

Padjadjaran University communication sciences lecturer Justito Adi Prasetyo said social media blocks should not be left to the state because the government did not yet have a standardized procedure in determining problematic content online. “As a result, online access restriction has only been related to information that is detrimental to the government,” he said on Tuesday.

According to Justito, social media blocks should be done by platform providers, citing an example where Germany appointed the local Facebook representative office authority to block social media accounts.

These platforms, thus, have special teams to cross-check accounts that often upload hate speech. The German government then requires the providers to remove the content within a maximum of one hour since its discovery. If they are unable to do so within the timeframe, the provider is fined by the government.

The Indonesian government, said Justito, could emulate these efforts with a number of innovations. For example, he said platform providers could be required to partner with parties experienced in probing online information, such as the Indonesian Anti-Defamation Society, the Southeast Asia Freedom of Expression Network (SAFEnet) or Cekfakta Tempo.co.

“We cannot rely solely on the government because it risks violating human rights,” he added.

The public has been urged not to doubt the benefits of the potential COVID-19 vaccine to be provided by the government. The COVID-19 task force has ensured that the potential vaccine has gone through rigorous clinical trials, accompanied by supervision from state-owned authorities and international agencies.

“Vaccines boost the body’s immunity to fight a disease. This is a precaution to take so that people do not need to be exposed to the disease first to develop immunity,” said COVID-19 task force spokesperson Reisa Brotoasmoro.

Reisa further explained that the government had three ways of meeting domestic needs. First, through the development of the Merah Putih (Red and White) vaccine as well as the collaboration between PT Bio Farma and China-based Sinovac.

Second, Indonesia has secured the procurement of four vaccine candidates from abroad, namely those developed by Astrazeneca, Sinovac, Cansino and Sinopharm.

Last, the government is collaborating with international institutions CEPI and Gavi Alliance to gain access to vaccines from multilateral cooperation.

Public anger triggered by the passage of the controversial Job Creation Law has been targeted at two ruling parties, namely the Indonesian Democratic Party of Struggle (PDI-P) and the Golkar Party, according to a recent study by the Institute of Research, Education and Information for Social and Economic Affairs (LP3ES).

The study used “conversation mapping” to analyze jobs law discourse from Oct. 3 to 13, LP3ES associate Tomi Satryatomo said. Within the study’s timeframe, the weekend deliberation of the then-omnibus bill, the House of Representatives plenary session for the bill’s endorsement and the handover of the final draft of the law from the House to the government took place.

“The public has expressed extraordinary anger, surprise and disbelief toward both Golkar and the PDI-P,” he said during a press conference on Sunday.

The LP3ES analyzed Twitter conversations and 400 online news sites, both national and local, whose subjects included the jobs law, the PDI-P, Golkar, the Democratic Party and the Prosperous Justice Party (PKS).

Tomi said Golkar, the party with the second-highest number of seats in the House, had been the target of more public anger than the PDI-P.

The study found that the Democratic Party and the PKS were discussed in a positive light, along with the public opposition to the controversial law.

“The Democratic Party has the highest favorability and great popularity. The PKS, however, is the most popular, but its favorability is below that of the Dems,” Tomi added.

Papuan youth figures have expressed appreciation for the government in handling and completing their investigation on the shootings in Intan Jaya regency, Papua, in September.

“We would like to thank the government, in this case President Joko [“Jokowi”] Widodo, for his sincere intentions to handle [the case] and these circumstances, which have been occurring more often lately,” said Papuan youth leader Victor Abraham Abaidata.

Victor, who is also a member of the government-sanctioned fact-finding team (TGPF), said that the establishment of the TGPF has allowed issues in Papua to be more approachable and handled constructively so that Papuans can live peacefully under the security of the Indonesian Military (TNI).

“Developing an approach is far more important, which was what the TGPF was doing to restore the Papuan people’s trust in the state and the government,” Victor added.

Pastor Henok Bagau, a religious leader from Intan Jaya who was close to Pastor Yeremias Zanambani who was shot in Intan Jaya on Sept. 19, believed that the disclosure of facts would encourage Papuans to become more trusting in the central government.

In the investigation team, Pastor Henok admitted to working closely with TNI personnel, the police and even the State Intelligence Agency (BIN).

The visit of Japan’s Prime Minister Yoshihide Suga amid the COVID-19 pandemic has created positive sentiment surrounding the government’s effort to boost national economic recovery. Businesses believe this could be used as an opportunity to explain the Job Creation Law in detail to Japanese investors who have been worried about the new law.

During his visit, Suga expressed his commitment to cooperating with Indonesia, including providing 50 billion yen, or Rp 7 trillion (US$482 million), in loans for Indonesia. Japan will also push cooperation in the healthcare sector by providing medical equipment needed for the COVID-19 response.

Besides, he also discussed some points on strengthening economic cooperation, participation in Indonesia’s sovereign wealth fund, and Indo-Pacific partnership with President Joko Widodo.

The visit signals that Indonesia is still an attractive market for Japan regardless of the situation.

The prospectus for the state-owned shariah banks merger is still underway. However, seeing from the share of ownership, it seems that Bank Mandiri will gain the most from this merger.

Despite having BRI Syariah as the surviving entity, the merger is likely to become a backdoor listing for Mandiri Syariah. Bank Mandiri will become the majority shareholder with more than 50 percent of the shares, while BRI and BNI will each have a 24 percent stake.

As the majority shareholder, the financial report of the new shariah bank will be consolidated with Bank Mandiri’s. The additional assets would make Bank Mandiri the biggest bank in Indonesia.

In total, the new shariah bank will have Rp 21.52 trillion (US$1.5 billion) in capital. There will be a new rights issue with the merger. According to Kontan’s source, the rights issue would amount to Rp 31 trillion in total.

“However, this is just a rough estimate. The amount of the rights issue could be more than that, depending on the need for capital and operational expenses of the new shariah bank,” said the source. What’s certain is that BRI’s and public shares will be diluted.

Vice President Ma’ruf Amin said the sharia financial and economic system in Indonesia was still exclusive to a certain community. Thus, the government would develop sharia finance into a universal system open to all people.

Ma’ruf said the sharia system should synergize and mutually complement the conventional financial and economic system, and therefore, Indonesia could implement the dual systems.

Ma’ruf said the government would continue to strengthen the sharia system by, among other things, transforming the National Committee for Sharia Finance (KNKS) into the National Committee for Sharia Finance and Economy (KNEKS), which will supervise not only the sharia financial system but more than that the sharia economy in general including sharia industry and trade. President Joko Widodo would be the chairman and Ma’ruf would be the deputy.

The KNEKS will focus on four areas: the development of halal products, financial services, sharia social fund and sharia businesses.

Start-ups across Southeast Asia are struggling to raise capital to support business growth following the bullish funding received by early-stage companies during the first half of the year, prompting some to speculate about the end of the unicorn era.

Singapore-based equity firm Asia Partners cofounder and managing partner Nicholas Nash reported that Southeast Asia was not seeing the US$1 billion in funding for start-ups annually that was needed to spur growth. “We see a lot of venture capitalists writing checks for seed-stage companies but there is an acute gap in series C and D funding in the region.”

Indonesia saw at least 51 funding agreements announced throughout the first half of the year, with 31 deals being made in the second quarter, higher than the 24 deals over the same period last year, according to DailySocial.id data. As many as 13 of the 31 funding agreements were made with seed-stage companies.

Nash explained that Indonesia had seen a 10 percent increase year-to-date in $1 million to $20 million ticket deals compared to last year. However, the country also saw a 19 percent decline in $20 million to $100 million funding often found in series C and D over the same period.

Meanwhile, the number of start-ups raising capital above the $100 million mark had increased by 44 percent. Companies that have exceeded the $100 million fund raising mark amid the pandemic include online travel agency Traveloka, which has secured $250 million, and coffee shop chain Kopi Kenangan, which has raised $109 million.

IFG president director Robertus Billitea said all companies under IFG would now coordinate in their sales, offering the whole package with bundling of their products, and this will increase their leverage in the market.