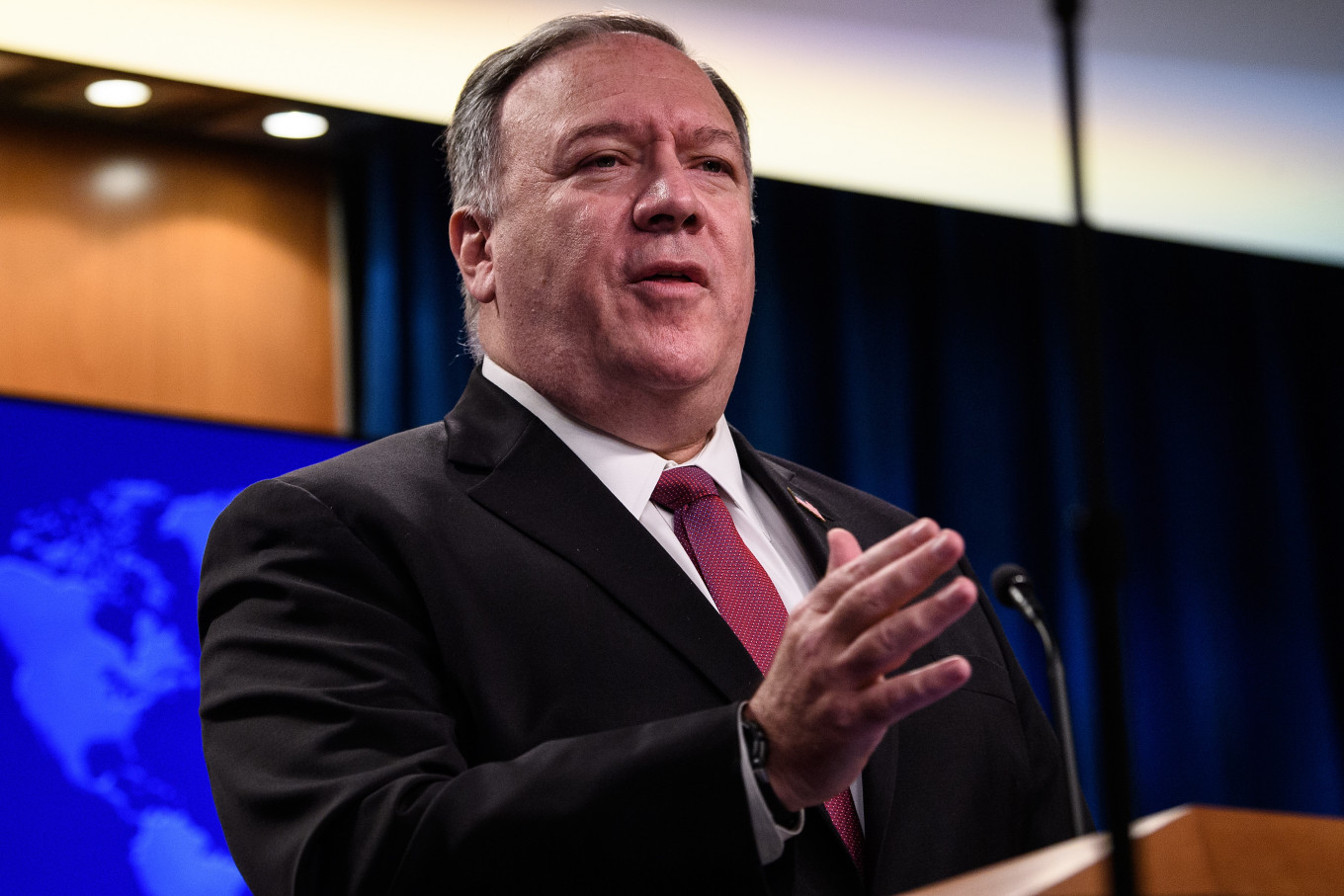 US Secretary of State Mike Pompeo speaks at a press conference at the State Department in Washington, DC, on Wednesday. (AFP/Nicholas Kamm)

United States Secretary of State Mike Pompeo is scheduled to visit Indonesia next week, with an itinerary that includes a bilateral meeting and attending an event held by an Islamic youth group, Foreign Minister Retno LP Marsudi has said.

In addition to attending bilateral meetings, Pompeo is set to attend a dialogue on religion and civilization organized by GP Ansor, the youth wing of Indonesia's largest Islamic organization Nahdlatul Ulama (NU), she added.

"The delegations from the US International Development Finance Corporation (DFC) will also visit Indonesia this week," Retno said.

The US and Indonesia have agreed to further tighten defense and maritime security cooperation between the two countries following a meeting between Prabowo and Esper, during which they discussed regional security, bilateral defense priorities and defense acquisitions, the US Department of Defense reported in a statement issued on Oct. 16.

The Prosperous Justice Party (PKS) faction at the House of Representatives has highlighted a missing article from the latest 1,187-page version of the contentious Job Creation Law draft sent to the government.

Missing from this version is Article 46 on Oil and Gas Law No. 22/2001. Mulyanto, a PKS lawmaker and member of the House Legislation Body (Baleg), said the article had been included in a 905-page version of the law, issued on Oct. 5.

The working committee (Panja) for the law had asked for the article to be removed. Following the request, half of the article’s clauses were removed, while some were retained in the 812-page version of the law issued on Oct. 12. However, the PKS noticed that the whole article had been omitted in the latest version of the law.

Mulyanto said the constant alterations made to the law were due to the House’s hasty drafting process. “This has sparked questions from the public. Can we accept this law, considering how hasty its formulation process was?” said Mulyanto.

The government, meanwhile, has admitted that the article had been removed from the latest version of the law. “The State Secretariat has done its job properly. During the final ‘cleansing’ process, the State Secretariat identified an article that should not have been included in the law and informed the House about it,” said Presidential Spokesperson Dini Purwono.

Jakarta Council Deputy Speaker Zita Anjani has accused the Jakarta administration of prioritizing road construction without giving proper consideration to the capital city’s drainage system ahead of the rainy season.

The criticism was made during Zita’s meeting with Surabaya Mayor Tri “Risma” Rismaharini in Surabaya on Thursday. During the meeting, Risma emphasized the paramount importance of constructing drainage under roads to prevent floods.

Meanwhile, during the meeting, Zita expressed her hope that the Jakarta administration would foster inter-agency collaboration in addressing floods. “So [flood mitigation efforts are not carried out by] just one or two agencies. The public must also be informed and educated about floods early on to foster awareness and participation in protecting the environment,” said Zita.

Zita, who is the daughter of National Mandate Party (PAN) chairman Zulkifli Hasan, said she would report the results of her meeting with Risma to Jakarta Governor Anies Baswedan.

President Joko “Jokowi” Widodo has ordered his ministers to reduce exports of unprocessed coal and accelerate plans to develop downstream industries for processing the fuel. President Jokowi reminded his ministers of the need to transform the country from a raw commodity exporter into an exporter of processed commodities in order to increase the added value to the Indonesian economy. “I need to reiterate that we have to shift away from being a raw material exporting nation, and coal is among [these materials],” Jokowi said.

“Once completed, the project will increase the country’s total hospital bed capacity by nearly 1,000 and result in the provision of over 230,000 square meters of new building space that will improve treatment and laboratory facilities in hospitals, while also enhancing their emergency preparedness capabilities,” IsDB Group Regional Hub Indonesia head Saleh Jelassi said.