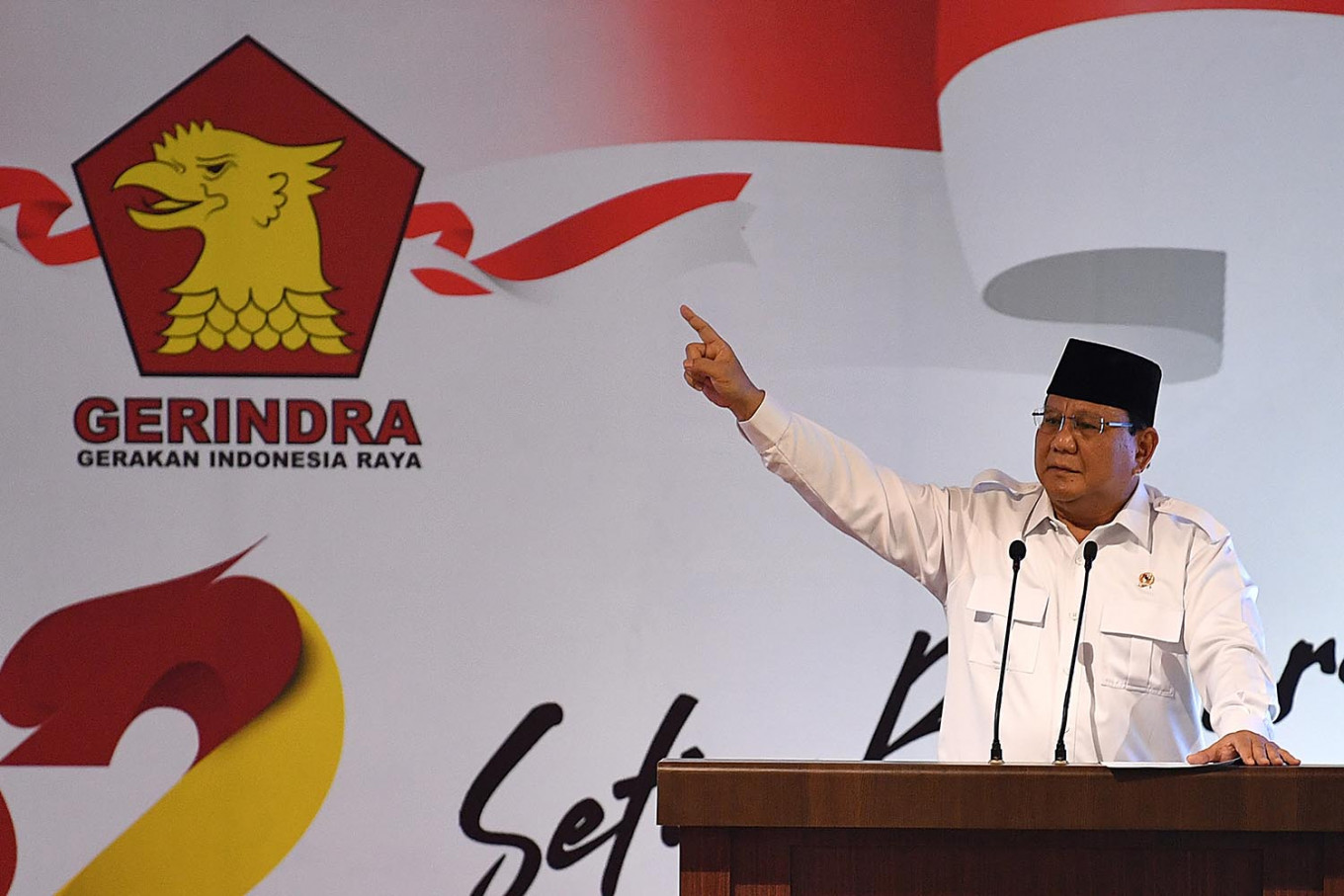 Prabowo Subianto has been reappointed as the chairman of the Gerindra Party during the party’s extraordinary congress held at his residence in Hambalang, Bogor, West Java, on Saturday.

Previously, during Gerindra’s national leadership meeting on June 4, members of all 34 party’s regional branches (DPD) requested Prabowo to continue his leadership within the party for the next five years.

Prabowo has been given 30 days to appoint the rest of the party’s leadership lineup as well as to review the party's rules of association and internal bylaws (AD/ART). During the congress, Prabowo reappointed Ahmad Muzani as the party’s secretary-general.

Muzani said that Prabowo wanted the party’s leadership to be dominated by those aged less than 50 years old.

In regard to party members’ encouragement for Prabowo to again contest the presidential election in 2024, Muzani said that the defense minister would wait for at least a year and a half before the big event.

One of Indonesia’s newest political parties has emerged from an internal leadership struggle with a clear victor: a supporter of President Joko “Jokowi” Widodo. The realignment is the latest in a series of political switches in support of the government.

Hutomo “Tommy” Mandala Putra, the youngest son of former president Soeharto, has lost control of the Berkarya Party, the political party that he established in 2016. His challenger, Muchdi Purwoprandjono, a former State Intelligence Agency (BIN) deputy chief and a former commander of the Army’s Special Forces (Kopassus), has secured the government’s support for his leadership.

The Law and Human Rights Ministry, which has the authority to authorize leaders of the country’s political parties, granted Muchdi control of the Berkarya Party following an internal power struggle with Tommy over their different stances toward President Jokowi’s leadership.

Unlike Tommy, who has been an outspoken critic of many of Jokowi’s policies, Muchdi has been a Jokowi supporter since his first term. Muchdi’s victory in the internal struggle has brought additional support to Jokowi’s government.

Political scientists have noted that the country’s political climate requires parties to be part of the ruling coalition for survival. A lack of financial resources has driven parties in the House to submit to the ruling parties instead of criticizing the government on behalf of the public.

President Joko “Jokowi” Widodo has officially issued Government Regulation No. 41/2020 that changes the status of the Corruption Eradication Commission (KPK) employees from independent workers to civil servants (ASN). The change is stipulated in the 2019 revision to the KPK Law.

KPK acting spokesman Ali Fikri said the KPK was currently studying the regulation and would coordinate with related ministries and government agencies to enforce the change.

The survey, which has a margin of error of 2.9 percent, was conducted by phone between July 29 and Aug. 1 and involved 1,203 respondents.

The SMRC survey also found that 87 percent of respondents considered the country’s economic condition to be worse than last year.

SMRS program manager Sadiman said the survey results could serve as an opportunity for Jokowi to carry out his efforts to spur a recovery from the health and economic crisis, especially considering that most citizens believe the country’s economy will continue to decline.

Padjadjaran University (Unpad) School of Medicine professor Kusnandi Rusmil, who is also the clinical trial research team leader, said the human trials would commence on Aug. 11 although the number of registered volunteers as of Thursday was still half the target.

“So far, about 800 volunteers have registered [for the trials],” Kusnandi said on Thursday. The tester team was looking for a total of 1,620 volunteers, he said, and that volunteer registrations would be open until Aug. 31.

The trials are expected to finish in half a year at the earliest.

Prior to the trials, the team will make sure that volunteers receive a clear explanation about the trial process from doctors, before they sign a letter of consent to be test subjects.

The monetary expansion has yet to make its intended impact in helping businesses affected by the COVID-19 pandemic. The Indonesian Employers Association (Apindo) deputy chairwoman, Shinta Widjaja Kamdani, said not all businesses were able to make use of the government stimulus, especially since banks’ liquidity has not improved.

Institute for Development of Economics and Finance (Indef) economist Bhima Yudhistira said businesses have not felt the impact of government stimulus because banks are still holding back from lowering credit interest rates as businesses are facing high risk. Banks also need to maintain their liquidity because there is a competing fund use for bonds that have 7 percent interest rate, he added.

Indonesian agriculture has emerged as a buttress against the pandemic’s impact on the economy this year, supported by the resilience of farmers and the accounting effects of an incidental shift in the harvest season.

The sector, the second-largest contributor to Indonesia’s economy, managed to grow 2.19 percent year-on-year (yoy) in the second quarter, albeit more slowly than the sector’s yoy growth in the same period last year: 5.3 percent.

Most other sectors, such as transportation and warehousing, suffered steep declines as a result of pandemic-related restrictions.

Bustanul Arifin, an economist at the Institute for Development of Economics and Finance (Indef), said that while the growth could be partially attributed to the resilience of farmers to the crisis, it was also aided by a delay in the rice harvest following last year’s drought.

The rise and fall of RI’s stock market in the last 43 years
Bisnis Indonesia, headline

Today marks the 43rd anniversary of the Indonesia Stock Market (IDX). The stock market has faced numerous crises since being reactivated in 1977, including the 1998 monetary crisis and 2008 global financial crisis. Now, it is again facing challenge due to the COVID-19 pandemic and looming recession.

Now, the current market pressures have not seemed to reduce market players’ optimism either. The IDX Composite index has started to recover and passed 5,000 points after plunging to 3,937.63 on Mar. 24. The interest in initial public offerings (IPO) is also on the rise with 699 issuers recorded to be in the pipeline.

Recession is threatening the global economy. Several countries in Asia, namely Singapore, Hong Kong and the Philippines, have entered a recession. Meanwhile, Indonesia is on the brink as negative economic growth in the third quarter will officially place it under recession.

The recession has affected the performance of several investment instruments, making it even more important to carefully manage investment portfolios. Usually, US dollar-based assets are a popular choice during a recession. But since US dollar fundamentals have weakened due to the COVID-19 pandemic, investors have been resorting to gold instead.

Institute for Development of Economics and Finance (Indef) economist Bhima Yudhistira said gold remains attractive for investors, especially if the recession lasts for a long period. However, the gold price is already high. Therefore, the government bonds might be a good alternative since it has around 7 percent yield, he added.

Stock market players said stock market and stock exchange authorities should be more focused on improving issuers’ quality, not only quantity, to attract investments into the country, such as by implementing good corporate governance (GCG).

The Indonesian Association of Mutual Funds Managers (APRDI) presidium chairman Prihatmo Hari Mulyanto said investors would be more attracted to invest in the domestic market if companies listed, as well as those that are going to enlist, have good quality.

“Therefore, [the authorities] should be more selective. The market cap should be high enough to have good liquidity. Furthermore, supervision needs to be improved as well to create a proper, efficient and organized trading,” he added.

They said the authorities keep enforcing GCG in the listed companies so the domestic stock market could be more resilient, efficient and have high quality.