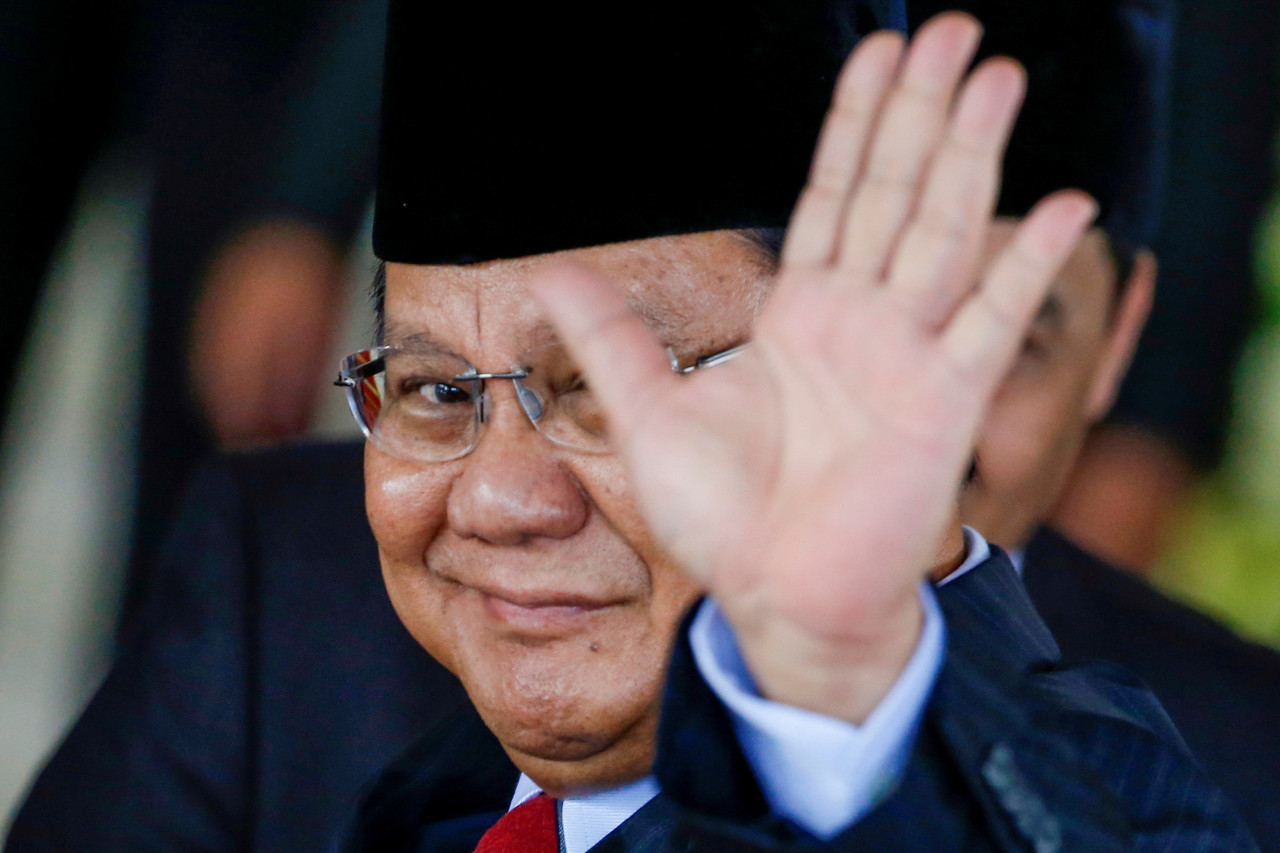 Prabowo Subianto gestures as he arrives to attend the inauguration of Indonesia's President Joko Widodo for the second term, at the House of Representatives building in Jakarta, Oct.20, 2019(Reuters/Willy Kurniawan)

Defense Minister Prabowo is scheduled to visit Austria following his much-anticipated visit to the United States from Oct. 15 to 19 to discuss the possible purchase of Eurofighter Typhoon fighter aircraft. Also on the minister’s itinerary is France, Germany and Turkey, although official confirmation has been received only on his US trip from the Defense Ministry.

The ministry’s public relations head, Brig. Gen. Djoko Purwanto, referred journalists to Prabowo’s spokesman Dahnil Simanjuntak, but he was not available for comment.

The purpose of Prabowo’s foreign tour is believed to be for cementing deals in weapons procurement and establishing defense cooperation to help domestic companies meet Indonesia’s so-called Minimum Essential Force (MEF) target by 2024.

A leaked correspondence dated Oct. 8 from Prabowo to his Austrian counterpart Klaudia Tanner thanked her for her letter dated Sept. 4 in response to Prabowo’s initial letter on July 10.

“We are in the middle of procuring vital equipment to protect our national territory and citizens, thus following [up on] our proposal [regarding] the Austrian Eurofighter [aircraft],” Prabowo said in the letter, a copy of which was received by the The Jakarta Post from an Austrian source.

Mahfud said that the government had therefore not “fabricated” the results of the team’s investigation, which had concluded without naming any suspects in the killing.

The 30-member TGPF comprises representatives of the Papuan community, religious leaders and scholars, as well as representatives of the National Police, the Indonesian Military (TNI), the State Intelligence Agency (BIN) and the Witness and Victim Protection Agency (LPSK). Papuans have expressed doubt over the independence of the TGPF since its establisment, especially because government and military officials dominate its membership composition.

The government is anticipating possible COVID-19 clusters to emerge at emergency shelters for flood victims as the country enters the rainy season.

The Meteorology, Climatology and Geophysics Agency (BMKG) has forecast heavy rainfall in several regions this month, with possible flooding.

Coordinating Maritime Affairs and Investment Minister Luhut Pandjaitan told the press today after an earlier meeting with President Joko “Jokowi” Widodo that seasonal flooding would severely affect the COVID-19 infection rate in the country. "Therefore, we also call on the public to consider and anticipate the BMKG’s warning," he said.

Meanwhile, Social Affairs Minister Juliari Batubara issued assurances that the government had taken several anticipatory measures ahead of the annual flooding, such as setting up more emergency shelters for better implementation of the health protocols, including physical distancing. He added that the ministry would be collaborating with the Health Ministry to provide COVID-19 testing for flood victims.

China’s Sinovac COVID-19 candidate vaccine will be sold at Rp 200,000 (US$13.55) per dosage, state-owned pharmaceutical company Biofarma executive director Honesti Basyir has said. Honesti also denied reports that Sinovac sold the vaccine to Brazil at $1.96 per dosage. Honesti added that the average transportation cost to ship Sinovac vaccine was $2 per dosage. The Indonesia Food and Drug Monitoring Agency (BPOM) and the Indonesian Ulema Council’s Food and Drug Analysis Agency (LPPOM MUI) will go to China to audit the development and production process of the Sinovac vaccine.

The National Land Agency (BPN) is preparing a government regulation on a land bank, following the House of Representatives’ decision to pass the omnibus Law on Job Creation. Agrarian and Spatial Planning Minister Sofyan Djalil said the government regulation would be ready in three months. The land bank will be headed by a committee of three ministers, and the agrarian and spatial planning minister will act as the committee chairman, Sofyan added.

Coordinating Maritime Affairs and Investment Minister Luhut Pandjaita has said the government is preparing an insurance scheme to protect farmers and fishermen from the impact of La Nina weather phenomenon. Luhut explained that insurance program was prepared by Finance Minister Sri Mulyani Indrawati, and was currently under finalization. La Nina is predicted to increase rainfall by 20 to 40 percent. Previously, President Joko “Jokowi” Widodo instructed his ministers to anticipate the impact of La Nina on Indonesia’s agriculture production.

Banks and e-commerce platforms are trying to ride the trend of customers choosing to invest rather than spend during the pandemic by offering investment services and pushing the use of existing assistance for retail investors. Publicly listed Bank Central Asia (BCA) vice president director Suwignyo Budiman noticed a shift toward wealth accumulation among customers after the bank recorded a surge in funds under management for investment products and bancassurance, while loans began to diminish. He added that demand had been particularly high for bonds, which gave a relatively higher return than bank time deposits as interest rates kept falling.

Prominent players in the country’s digital economy are hoping to benefit from this trend and thinking of expanding their platform to include investment features if they have not done so already. Decacorn ride-hailing app Gojek has expanded its services to include an investment platform by forming a partnership between its payment services GoPay and Pluang, an online gold investment platform. Bukalapak also announced on Oct. 5 the launch of its fintech arm PT Buka Investasi Bersama (BIB) and aims to attract 500,000 Bukalapak users as mutual fund investors in 2021. Tokopedia, on the other hand, already owns mutual funds and digital gold investment platforms; both have grown robustly since they were launched.