Provinces to speed up COVID-19 testing 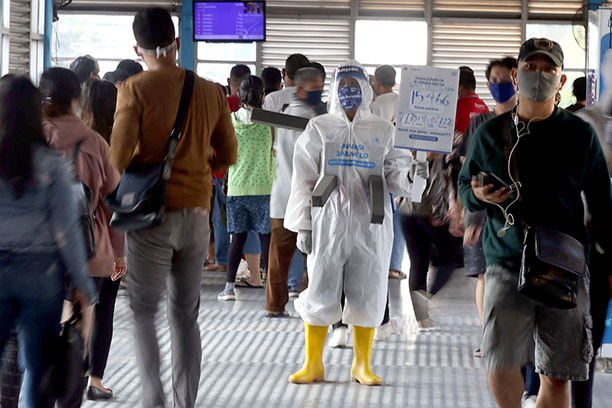 Invisible threat: Wearing a hazmat suit, a member of the TransJakarta supporters community holds up a placard featuring the latest COVID-19 case figures at Harmoni Station in Central Jakarta on July 17 to remind passengers of complying with health protocol. (JP/Dhoni Setiawan)

Jakarta Governor Anies Baswedan said his administration would not reduce the number of COVID-19 tests conducted in the capital city in order to make the number of new cases appear lower. Anies said that 66 percent of COVID-19 patients were asymptomatic and testing was still necessary.

Amid rampant corruption in the natural resources sector, the government is proposing centralizing licensing and environmental management in the omnibus bill on job creation, a move that would revoke some regional autonomy.

The 1,028-page bill aims to revise 79 laws, including the Spatial Planning Law, the Environmental Management Law and the Forestry Law.

Under certain provisions in the bill, local administrations would be stripped of their power to manage natural resources and the environment, and the central government would be the only authority on spatial planning and land, forest and coastal area management.

The bill will cut layers of the licensing process, including the requirement for businesses to obtain an Environmental Impact Analysis (Amdal) document, which is currently issued by local administrations. If the bill is passed into law, the process will be supervised by the central government.

Businesses will still be obliged to prevent environmental damage, but they will report only to the central government.

Indonesian Forum for the Environment (Walhi) executive director Nur Hidayati said Amdal had been ineffective in preventing environmental damage because of rampant corruption, but added that this failure did not mean it had to be eliminated. She said it was critical to protect the environment because Indonesia was prone to natural disasters.

North Sumatra acting governor Akhyar Nasution’s exit from the Indonesian Democratic Party of Struggle (PDI-P), which was subsequently followed by his decision to join the Democratic Party, was reportedly caused by Bobby Nasution, the son-in-law of President Joko “Jokowi” Widodo, and his mayoral bid in this year’s regional head election. Between the two parties, the PDI-P is deemed more lenient toward Bobby because of his familial connection to the President.

Democratic Party executive Kamhar Lakumani said there were two considerations behind Akhyar’s decision to switch parties. First, Akhyar was not allowed to exercise his political rights in Medan’s mayoral race. The second consideration, according to Kamhar, was Akhyar’s discomfort with PDI-P’s mechanism for attracting new members.

Activists have urged the government to make changes to the country’s law enforcement bodies following their failure to arrest fugitive and high-profile graft convict Djoko Tjandra, who has remained at large for more than a decade after being sentenced for his involvement the Bank Bali corruption case.

Meanwhile, Public Interest Lawyer Network coordinator Erwin Natosmal Oemar has asked the Supreme Court to revoke Djoko’s request to review his case, considering his lack of goodwill to abide by the law. Djoko failed to attend the hearing of his case review for the third time last week.

Education and Culture Minister Nadiem Makarim has come under fire after several organizations voiced their concerns over the involvement of private enterprises in the ministry’s latest teacher training grant program.

The Mobilization Organization Program (POP) is part of the minister’s Freedom to Learn initiative that aims to improve the quality of teachers by involving communities and organizations.

The Education and Culture Ministry had selected 156 out of 4,464 organizations that registered for the program. Among them were the Tanoto Foundation and the Putera Sampoerna Foundation.

The decision to include the two foundations in the program, however, has outraged the Indonesian Teachers Association (PGRI) and the two-largest Muslim organizations in the country, Nahdlatul Ulama (NU) and Muhammadiyah. They expressed their objections and withdrew from the program.

“It turns out that there are many unqualified organizations and foundations,” said NU’s Maarif Institute chairman, Arifin Junaidi.

Islam-based political party politicians also criticized the ministry’s decision, saying organizations with investors should not participate and get support from the state budget.

FDI to fall due to COVID-19 pandemic
Bisnis Indonesia, headline

The United Nations Conference on Trade and Development (UNCTAD) projects foreign direct investment (FD) to fall by up to 40 percent globally this year, pushing global investment to below US$1 trillion, the lowest level since 2005.

Restrictions implemented by countries to curb the spread of the COVID-19 pandemic has caused global investment to slow down. Some countries even specifically prohibit new investments. Therefore, countries need to prepare for a post-crisis economic reopening to attract foreign investment, such as strengthening partnerships between countries to enhance disrupted global supply chains.

Although the Indonesian government said it would focus on increasing domestic investment, FDI remains an important component as it makes up nearly half of the country’s total investment. The country’s FDI reached Rp 195.6 trillion ($13,43 billion) in the first semester, almost half of the Rp 402.6 trillion worth of investments accumulated in the period.

After Dutch oil and gas giant Shell’s withdrawal, the Masela Block’s liquified natural gas (LNG) project in Maluku province is again facing a tough road ahead because of land conflict issues. Referring to data from the Upstream Oil and Gas Special Regulatory Taskforce (SKK Migas), only a portion of the required land has been made available as of June, despite the target to operate by 2027.

SKK Migas said Sinar Mas Group has not been in contact with the agency regarding land acquisition. Should the rumors be true, SKK Migas hopes that Sinar Mas Group’s activities would not interfere with the Masela Block project.

The land needed for this project will be bought by the Finance Minister and owned by the state. Both the central and local governments have committed to making sure that the project will go smoothly, said Dwi.

Meanwhile, Sinar Mas Group denied it had bought land in the Masela Block area. Sinar Mas Group managing director Gandi Sulistyanto said he had checked the group’s forestry and mining units and had not found land owned by Sinar Mas in the area.

PT Pertamina president director Nicke Widyawati said Pertamina had decided on a capital expenditure (capex) of US$133 billion for the 2020-2026 period, 28 percent of which will come from external funds, 10 percent from project financing, 47 percent from internal funds and 15 percent from equity financing.

“Pertamina will require funds from external and project financing, amounting US$49 billion, up to 2026. The company’s financing options could include subholding IPOs, offering private bonds to investors and capital loans from banks. IPOs are a common financing method for multinational companies,” said Nicke.

Along with Pertamina's vision to secure a $100 billion market valuation and enter the Top 100 Global Fortune list by 2024, Pertamina’s reorganization would be important to distribute responsibilities between the holding (Pertamina) and its six subholdings to accelerate growth and expand its scope of services to earn more profit.

ReforMiner Institute executive director Komaidi Notonegoro explained that an IPO could emphasize Pertamina’s openness to the public and allow it to collect fresh funds to expand its business.

“Pertamina can also expand abroad for more reserves, like Saudi Aramco,” he said.

The Social Affairs Ministry has expanded the Family Hope Program (PKH) to include giving out working capital to 2.8 million recipients. Between 1,000 and 10,000 families will be included in the first trial run for the new program, dubbed PKH Graduation, according to the ministry’s social empowerment director general Edi Suharto. Currently, 8,574 families have been approved to receive the working capital.

As part of its COVID-19 pandemic response, the government plans to increase the number of recipients and the amount of aid for the PKH Graduation program. Participants can receive between Rp 500,000 (US$34.32) and Rp 3.5 million in working capital to start small businesses or micro industries, said Edi.

A total of Rp 5 billion has been allocated for the program, in addition to the Rp 203 trillion distributed for the National Economic Recovery program.

Social Affairs Minister Juliari Batubara said that ideally, this program would increase the welfare of PKH participants. That means when PKH Graduation participants are able to sustain themselves, they will be removed from the program and their allocation will be given to new participants.

The Taxation Directorate General is in talks with several more technology firms to collect value-added tax (VAT) on sales after recently imposing such rules on six firms, including Amazon and streaming platform Netflix.

The tax office was in a negotiation process with the tech firms to ensure that they were “ready and comfortable” to impose VAT on their Indonesian customers, spokesman Hestu Yoga Saksama said during a discussion held by the Center for Indonesian Policy Studies (CIPS).

Under the new rules, nonresident foreign firms that sell digital products and services in Indonesia worth at least Rp 600 million ($41,038) a year or generate yearly traffic from at least 12,000 users will be required to pay the 10 percent VAT.

The over-the-top (OTT) technology firms appointed by the tax office as VAT collectors are expected to start collecting the taxes in August. The VAT is imposed on sales of tech firms including Amazon Web Services, Netflix, music streaming service Spotify as well as Alphabet’s Google for its Google Asia Pacific, Google Ireland, and Google LLC units.