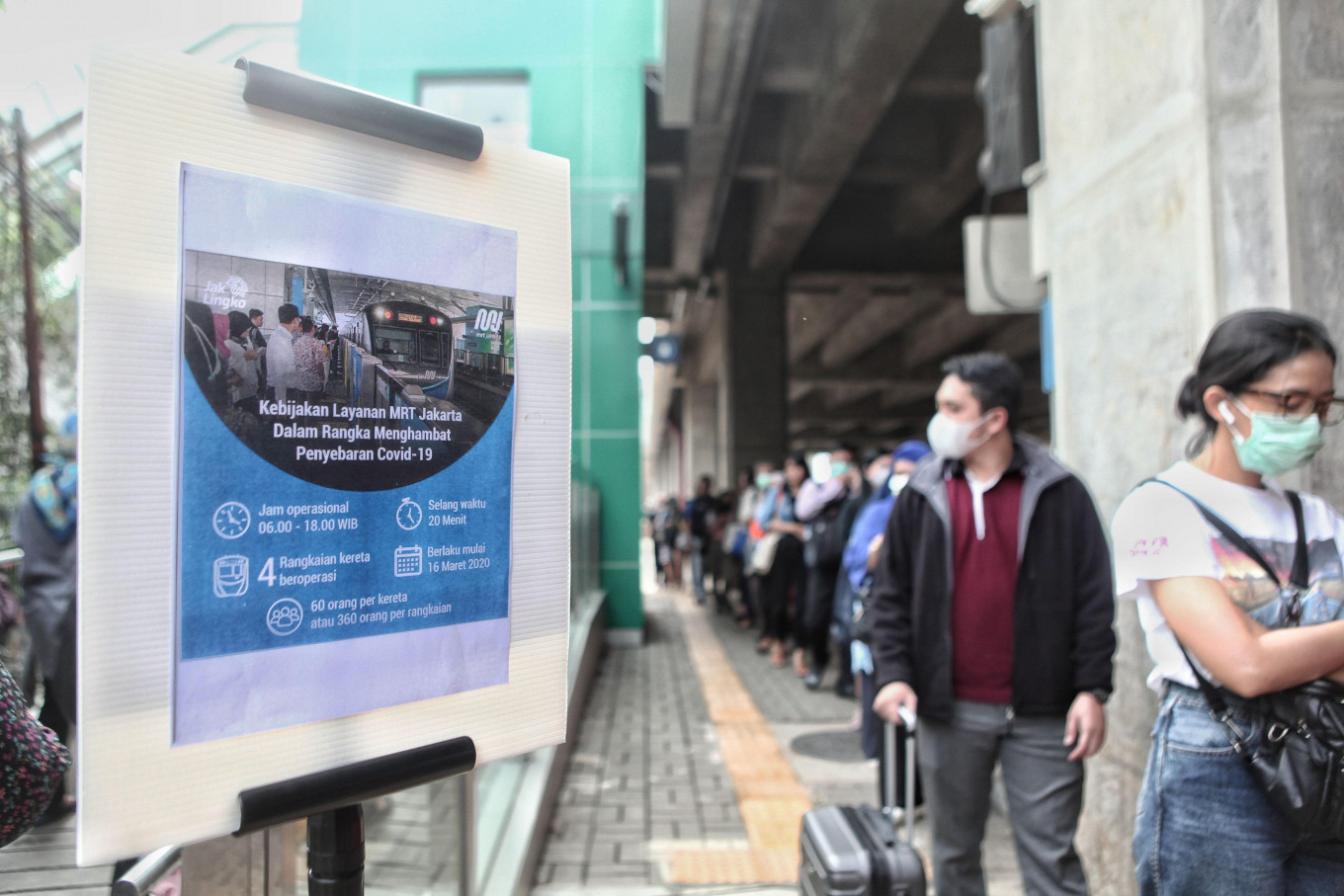 However, Anies said the Jakarta administration would uphold a recommendation for social distancing to prevent the spread of the novel coronavirus by limiting lines at Transjakarta and MRT Jakarta stations.

The restriction massively backfired, with large crowds and long lines building up at Transjakarta and MRT Jakarta stations across the capital on Monday. While some commuters appeared ignorant about the city’s containment efforts, many others had no option because they still had to go to work since their companies had yet to impose or had only imposed a partial work from-home policy.

The failure of social-distancing measures among commuters has resulted in passenger chaos despite the President’s call to stay at home.

President Joko "Jokowi" Widodo asserted on Monday that a lockdown was not yet an option for Indonesia. The President further emphasized that the decision to impose a lockdown, both at the national or regional level, was under the central government’s authority. “Such decisions cannot be made by regional administrations,” said Jokowi.

Jokowi said citizens should instead practice "social distancing" to contain the spread of the coronavirus disease 2019 (COVID -19). He added that while citizens were practicing social distancing by working, studying and worshiping from home, Jokowi had instructed all modes of public transportation, including buses and trains, to continue operating as usual to accommodate those who needed to venture out as well as to avoid passenger buildup.

Despite mounting calls from watchdogs and the House of Representatives, the General Elections Commission (KPU) said postponing the 2020 regional elections, slated for September, was not yet an option. According to KPU chairman Arief Budiman, all preparations for the elections were right on schedule.

The decision not to postpone the regional elections was made during the commission’s plenary meeting on Monday. The KPU, however, has decided to take precautionary measures to anticipate the spread of coronavirus disease 2019 (COVID -19), including by providing face masks and hand sanitizers for poll workers.

Indonesian Institute of Sciences (LIPI) Political Research Center head Firman Noor deemed the KPU’s decision too optimistic, considering the seriousness of the outbreak. “Let’s see whether the development of the virus outbreak could hinder the KPU from meeting its target,” said Firman.

Not all workers can work from home: Apindo
Koran Tempo, Berita Utama; The Jakarta Post, headline

Productively working from home, for those who can, is possible. That’s the message President Joko “Jokowi” Widodo and his Cabinet members are trying to project to reduce the rapid spread of the novel coronavirus disease 2019 (COVID-19).

For several employees, including those in sectors that require direct contact with customers, working from home may not be a luxury and this has created confusion among employers looking to catch up with the President’s instruction and deal with public transportation, which is packed during rush hour in Jakarta. Some others, however, have been quick enough to jump on the bandwagon and adopt the work-from-home policy.

Indonesian Employers Association (Apindo) deputy chairwoman Shinda Widjaja Kamdani said that not all companies could let their employees to work remotely to minimize the spread of COVID-19. Shinta said without their employees, several companies in a number of sectors, including service, could not operate well and would incur significant losses.

The handover of Democratic Party leadership from former party chairman and former president Susilo Bambang Yudhoyono to his eldest son Agus Hartimurti Yudhoyono is an opportunity for the party to consolidate and prepare for the 2024 election, observers have said.

“The regeneration [of leadership] is a good thing to do now because it will take a long time to manage the party under AHY’s leadership and to develop a strategy to gain public support in 2024,” said Indonesia Political Review executive director Ujang Komarudin. Ujang added that consolidating the party should be one of Agus’ first priorities as the new leader to improve the Dems’ standing in the upcoming legislative election.

Centre for International Strategic Studies (CSIS) researcher Arya Fernandes said Agus’ leadership came at a challenging time for the party as it had suffered a steady decline in votes. Such a position will make it difficult for Agus to run for the presidency in the 2024 election, Arya said, considering that the current presidential threshold — the minimum share of the legislative vote parties have to win to nominate a presidential candidate — was 20 percent, meaning that the Democratic Party had to form a coalition with other parties to nominate Agus to run for president.

After President Joko “Jokowi” Widodo called for the implementation of social distancing on Sunday, chaos ensued on Monday. There was a buildup of people waiting in line for public transportation after services were reduced in the hopes of encouraging people to stay at home. As a result, crowds became even more dense, the opposite of the social distancing that was intended.

Furthermore, Jokowi, who announced that regional government would have discretion to decide their own state of emergency, reneged on his decision when regional governments wanted to implement lockdowns in their areas. Jokowi emphasized that he had not considered lockdowns and that the government’s policy went as far as social distancing.

Sharing a similar sentiment, Indef researcher Abra Talattov advised the government to lockdown major areas because it had proven effective in curbing the COVID-19 spread in other countries. Several countries that have implemented lockdowns are China, South Korea and Malaysia.

Lockdowns in order to protect people from diseases or risks that could potentially cause a health emergency are regulated under Law No. 6/2018 on health quarantines. Per Monday afternoon, COVID-19 had been found to have infected 134 Indonesians with five fatalities recorded.

Analysts believe the novel coronavirus outbreak will continue to put pressure on the bourse amid the government’s slow response. The government’s inability to handle the outbreak has caused market players to predict that the virus will continue to spread throughout the country. Therefore, market players have been leaving the domestic stock market.

The Jakarta Composite Index (JCI) has fallen 25.54 percent year-to-date (ytd) to 4,690.66. In addition, the United States’ Federal Reserve’s decision to cut its benchmark interest rate to the lowest level since 2015 has caused the market to panic.

The rupiah exchange rate also weakened by 1.05 percent to Rp 14,933 per US dollar. Monex Investindo research head Ariston Tjendra predicts the rupiah will reach Rp 15,270 per US dollar as market players buy US dollars amid market instability as a safe haven and to stock cash.

MNC Sekuritas research head Edwin Sebayang said on Monday that at least Rp 100 trillion (US$6.58 billion) would be needed to stimulate the capital market that has seen a 25.5 percent plunge in the Jakarta Composite Index (JCI) and a more than Rp 1.5 quadrillion fall in market capitalization at the Indonesia Stock Exchange year-to-date.

OSO Sekuritas analyst Sukarno Alatas added that the novel coronavirus outbreak was currently in its initial stage and that the peak was predicted to come during the Idul Fitri exodus in May. However, with people complying with the government’s instructions, such as social distancing, the JCI would recover at the latest by the end of the second semester this year.

Furthermore, pension funds such as the Workers Social Security Agency (BPJS Ketenagakerjaan), the Indonesian Pension Fund Association and the Financial Institution Pension Fund (DPLK) said they were ready to buy stocks with good fundamentals in order to help stimulate the market. Many stocks are undervalued, and, therefore, it is also a good time for them to buy stocks.

President Joko “Jokowi” Widodo has instructed ministries and institutions to revise their budgets to handle the impacts of the COVID-19 pandemic. Transfers to regional governments are also to be adjusted for this purpose.

During a meeting at the Presidential Palace on Monday, the President requested ministries, institutions and regional governments to allocate budgets to social assistance that will be focused on strengthening the people’s purchasing power, especially those who have lost their jobs due to the pandemic.

The government will also provide a stimulus package to affected companies that have seen their production fall because of the pandemic and would have to lay off workers. Finance Minister Sri Mulyani and other ministries that manage state funds will provide follow ups to this stimulus.

“There is approximately Rp 40 trillion [US$2.63 billion] available for programs directly related to people’ spending, people’s purchasing power, for farmers fishermen, workers, labors as well as micro and small businesses,” said Jokowi in a press release.

Indonesia recorded a US$2.34 billion trade surplus in February thanks to higher manufacturing exports despite disrupted trade activities with China as a result of the COVID-19 pandemic, Statistics Indonesia (BPS) announced on Monday.

The country recorded a total of $13.94 billion in exports in February, an 11 percent increase year-on-year (yoy), while total imports fell 5.11 percent yoy to $11.6 billion due to falling imports from China.

“The significant factor is rising exports to Singapore, particularly of precious metals and jewelry,” BPS deputy for distribution and services statistics Yunita Rusanti said during an online press briefing.

“Exports to several other countries also surged significantly, such as palm oil exports to Ukraine and jewelry to Switzerland,” she added.

Meanwhile, drops in the country’s imports occurred among all types of products, namely consumer goods, raw materials and capital goods, amid a decline in shipments from China following the COVID-19 outbreak.