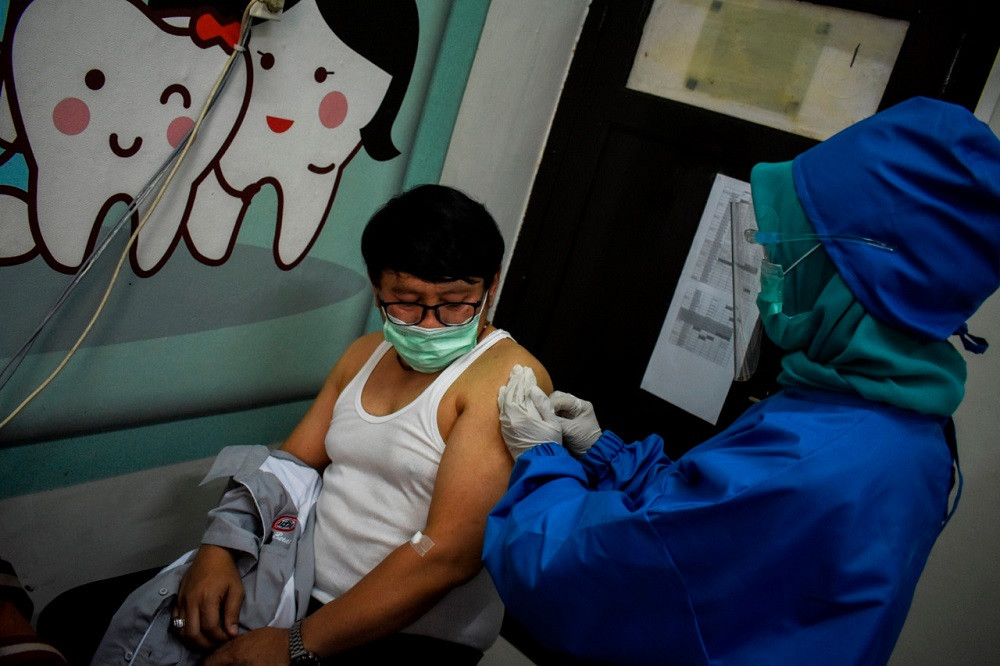 Human trial: A volunteer receives an injection of a COVID-19 vaccine candidate during a phase III trial in Bandung, West Java, on Aug. 14. The trial is being conducted on more than 1,600 healthy people in five areas across the West Java capital. (Antara/Prima Mulia)

According to Daeng, many people have avoided going to Puskemas and Posyandu to access health services for fear of contracting COVID-19. Thus, he said the government must address this issue because if it is not resolved, it may have a negative impact on Indonesia’s public health in the future.

“If we don’t solve this matter now, we are worried that COVID-19 cases will only continue to increase. Meanwhile, public service needs, SPM [minimum service standards] and stunting in Puskemas across all regions may only worsen.”

“God willing, the Ummat Party will be determined in working for and fighting together with the other nation’s children against injustice by upholding the 1945 Constitution and universal democratic rules,” said Amien.

Amien, who is the founder and former chairman of the National Mandate Party (PAN), claimed that the formation of this new political party would not be oriented toward power alone. According to him, the party was born out of concern that Indonesia was facing a dire situation in terms of its leadership.

The government will establish a joint team involving officials and members of the public to probe the recent killings in Papua’s Intan Jaya regency, Coordinating Political, Legal and Security Affairs Minister Mahfud MD said on Thursday.

Mahfud added that the team would include government officials, academics as well as members of the religious community and customary leaders. The team will report its findings to President Joko “Jokowi” Widodo through the coordinating minister.

“The government will form [this] joint investigation team that can be more objective in exploring [the killings], so as not to cause controversy,” Mahfud said during a press conference on Thursday.

Statistics Indonesia (BPS) has reported 0.05 percent month-on-month (mom) deflation in September, making it three consecutive months of deflation. As a result, Indonesia’s accumulative inflation from January to September dwindled to 0.89 percent. Compared to the same period last year, accumulated inflation was recorded higher at 1.42 percent. BPS head Suhariyanto explained that September’s deflation was due to falling prices in the food, beverages and tobacco category.

The government had disbursed Rp 304.62 trillion (US$20.5 billion) as of September, or 43.8 percent of the national economic recovery (PEN) program budget amounting to Rp 695.2 trillion. According to Finance Ministry data, the highest disbursement has occurred in the social assistance category at 73.84 percent out of a total Rp 203.9 trillion. Next is micro, small and medium enterprises (MSMEs) assistance programs at 64.03 percent out of total Rp 123.46 trillion. PEN’s assistance program for big corporations, amounting to Rp 53.57 trillion, has not been disbursed yet. Deputy Finance Minister Suahasil Nazara said the government was still preparing a government regulation before disbursing the assistance for big corporations.

The government is looking to raise around Rp 12.1 trillion (US$810 million) in revenue from stamp duty as the House of Representatives passed a law on Tuesday to increase the stamp duty to Rp 10,000 for business document deals starting next year. Tax Office chief Suryo Utomo said the new law was necessary to boost tax collection, as the country grappled with hefty tabs to boost the economy impacted by the COVID-19 crisis. The new policy will change the current law, specifically Law No. 3/1985, which adopts a two-tariff system, namely a Rp 3,000 stamp duty for documents with deals worth between Rp 250,000 and Rp 1 million and Rp 6,000 for documents with deals worth more than Rp 1 million. Although revenue from stamp duty has risen in the last 10 years, its contribution shrank to only 0.09 percent of tax revenue in 2019 as the tariff remained stagnant since 2000, Center for Indonesia Taxation Analysis (CITA) deputy director Ruben Hutabarat said. “We are hoping that revenue from stamp duty could return to 0.2 percent of all tax revenue,” Ruben told The Jakarta Post.