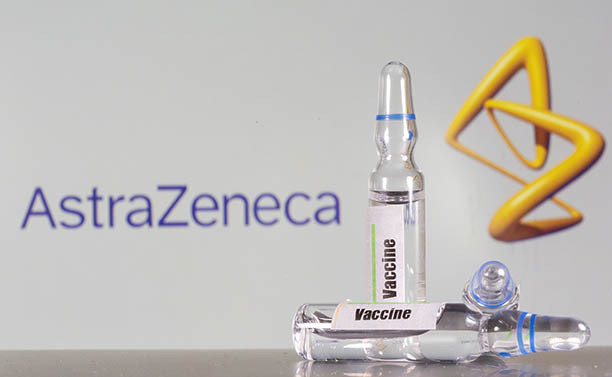 FILE PHOTO: A test tube labelled with the Vaccine is seen in front of AstraZeneca logo in this illustration taken, September 9, 2020. (REUTERS/Dado Ruvic/Illustration/File Photo)

SHARES Indonesia has secured a commitment of 100 million doses of COVID-19 vaccines from the United Kingdom’s pharmaceuticals company AstraZeneca for delivery next year, Foreign Minister Retno Marsudi said from London on Wednesday.

Retno and State-Owned Enterprises Minister Erick Thohir led a state delegation on a two-day trip to London this week to meet with various stakeholders, including executives from AstraZeneca, who signed a Letter of Intent (LOI) with the Indonesian Health Ministry on the procurement of their COVID-19 vaccine candidate.

Coordinating Economic Minister Airlangga Hartanto previously said the government was going to make a 50 percent down payment for a potential vaccine from AstraZeneca by the end of this month in a deal totaling US$500 million.

Retno said negotiating teams from Indonesia and AstraZeneca had struck a deal virtually for a vaccine candidate that used a non-replicating viral vector platform and was one of the world’s leading potential COVID-19 vaccines, currently in the final stage of human trials.

The vaccine, developed with the aid of Oxford University researchers, could provide early an analysis of data from their various large trials over the next two months, according to reports.

“Indonesia has submitted a request for a vaccine supply of 100 million [doses] for 2021. AstraZeneca has responded positively. The first delivery is expected to be made in the first half of 2021 and will be carried out gradually,” Retno said.

Leading expert at the Executive Office of the President, Donny Gahral Adian, said that the government had ruled out issuing a government in lieu of law (Perppu) to revoke the controversial job creation law.

“A Perppu won’t happen because the President has already said, some time ago, that anyone who objects [to the jobs law] can [submit a judicial review] at the Constitutional Court. There is no other option,” said Donny on Wednesday.

The State Palace officially received the draft job creation law from the House of Representatives on Wednesday afternoon. House secretary-general Indra Iskandar submitted the 812-page text to the State Secretary.

Donny said President Joko “Jokowi” Widodo would first read the text before signing it, ensuring that the President will not take too long. At the same time, the government is readying a narrative concerning the jobs law to ensure that the government’s perceptions are conveyed uniformly.

A survey conducted by Jakarta-based pollster KedaiKOPI showed that State-Owned Enterprises (SOEs) Minister Erick Thohir was the most appreciated minister in handling the COVID-19 pandemic, according to respondents. Erick was given a score of 5.9 out of 10.

KedaiKOPI executive director Kunto Adi Wibowo said that the survey was conducted to assess the performance of the Indonesia Onwards cabinet, by assigning a maximum score of 10 for highest satisfaction and a score of one for lowest satisfaction.

“According to urban Jakarta workers, the performance of the SOEs Minister, who also helms the COVID-19 handling task force, has been highly satisfactory. This suggests that the public still has confidence in Erick’s ability to handle and overcome the pandemic,” said Kunto Adi.

As diplomacy for the procurement of the COVID-19 vaccine with foreign parties has been strengthened, the development of the homegrown Merah Putih (Red and White) vaccine has also seen strides forward. However, COVID-19 transmission control must still prioritize adherence to health protocols and strengthening systems for tracking, tracing and isolating.

Eijkman Molecular Biology Institute head Amin Soebandrio said that Indonesia’s massive population required a broad coverage of COVID-19 vaccinations to effectively form herd immunity. If 70 percent of the population needs to be vaccinated – about 180 million people – then around 360 million doses of the vaccine will be needed.

“We cannot depend entirely on [importing vaccines from] foreign countries. For that, we must be able to produce our own vaccine. However, just because we will have the vaccine soon does not mean that the public can slack on discipline in following health protocols,” he said.

A high possibility of a low voter turnout, coupled with increased probability of money politics in the midst of the COVID-19 outbreak, will compromise the integrity of the December 2020 simultaneous regional elections and will likely result in local leaders having low electoral support from the public, experts have said.

Considering that possible scenario, election observers and political analysts speaking during a webinar organized by the Centre for Strategic and International Studies (CSIS) on Wednesday called for a delay in the implementation of the simultaneous regional elections in 270 regencies and municipalities until there are new rules and regulations that can guarantee the safety of both voters and political candidates.

Political analyst Hadar Nafis Gumay of the Network for Democracy and Electoral Integrity said there should be an assurance that all electoral processes could guarantee the safety of everyone involved and that under the current arrangement there were enough loopholes that could put everyone at risk of catching COVID-19.

"Elections and pandemics don't mix. Elections are loud, and pandemics should be quiet. We need to have new rules for having an election during a pandemic. The General Elections Commission [KPU] has inserted some new articles on social distancing measures, but they were very narrow. This goes beyond technical regulations. We need to change the law on regional elections," said Hadar, a former KPU commissioner himself.

Hadar said the proposed new elections law, which the government could write in six months, should guarantee the integrity of the elections and that all processes involved would be of high quality. "The benchmark of a good election is participation. With COVID-19, people will be reluctant to join the process and there will be not too many parties monitoring the process. The new law should address this," Hadar said, adding that the government should only delay the elections by up to six months.

Foreign investors have been closely watching the developments of the Job Creation Law. Previously, 23 US and Europe-based retail companies wrote a letter to House of Representatives speaker Puan Maharani and President Joko Widodo. They said they appreciated the government’s goal of simplifying the licensing process but would also like to ensure that workers were getting fair pay.

British Chamber of Commerce in Indonesia (Brit-Cham) executive director Chris Wren said the new law would make Indonesia more competitive than other regional players, such as Vietnam. Amid the issue of manufacturing relocating from China to other countries with lower production costs, Indonesia has become a possible candidate because of the omnibus law.

However, it might be too early to discuss potential new investments as foreign investors are still waiting to see and analyze the promised supporting regulations. PT Toyota Motor Manufacturing Indonesia administration, corporate and external affairs director Bob Azzam said, “The implementing regulations need to be finished first. Only then can the investment plan follow.”

Bank Indonesia (BI) spokesman Onny Widjanarko said that according to BI’s Business Activity Survey (SKDU), the weighted net balance (SBT) of business activities improved with a contraction of 5.97 percent, much better than the 35.75 percent contraction in the second quarter. The respondents to the survey also predicted that the SBT would go to positive in the next quarter, to 2.12 percent

In line with the improving SBT, the manufacturing sector has also shown an improvement with BI’s Prompt Manufacturing Index (PMI-BI) increasing to 44.91 percent in the third quarter from 28.55 percent in the second quarter, but still lower than the 52 percent recorded in the third quarter of last year. A PMI index of below 50 indicates contraction, while one above 50 denotes expansion.

Indonesian Chamber of Commerce and Industry (Kadin) deputy chairwoman Shinta W Kamdani said business showed recovery in the third quarter because the government had relaxed large-scale social restrictions (PSBB). She was also optimistic that business performance would get even better in the fourth quarter due to rising consumption.

Despite the improving index, the manufacturing sector is still in contraction as expansion is indicated by a score above 50 percent. The score projection for the fourth quarter is 47.16 percent.

Industry players acknowledged that there had been an increase in economic activity. Demand has increased, although it is still far from returning to pre-COVID-19 levels. Economists also note that household purchasing power has not truly recovered.

The government has started the process of merging three state-owned banks’ sharia subsidiaries, expecting to create the country’s biggest sharia bank and one of the 10 largest banks in the country by early next year.

BRI Syariah will be the surviving entity as its publicly listed status will simplify the merger. The company's stocks, traded on the Indonesia Stock Exchange (IDX) under the code BRIS, soared almost 25 percent as of 11:56 a.m. Jakarta time on Wednesday. The stocks have gained 616.84 percent so far this year.

“This CMA signing is the start of the merger. We will continue our preparations so that the merger could hopefully be completed by February of next year,” Bank Mandiri vice president director Hery Gunardi, who is also in charge of the merger, said during a virtual press briefing on Tuesday.

After the integration, he went on to say, the sharia bank planned to strengthen its wholesale business by becoming an adviser for global sukuk issuance for prospective Indonesian companies.

Erick also revealed that Contemporary Amperex Technology Co. Ltd. (CATL) of China and LG Chem Ltd of South Korea had expressed interest in joining the IBH in the US$20 billion project to develop and produce lithium batteries.

Erick said the project would use the abundant nickel in Indonesia as a raw material. Currently, Indonesia dominates the international nickel market, supplying 27 percent of global demand. In the future, most of the nickel will be processed in Indonesia.

Recently, MIND ID completed the acquisition of a 20 percent stake in Vale Indonesia (PTVI), making it the second-largest shareholder in the nickel company.