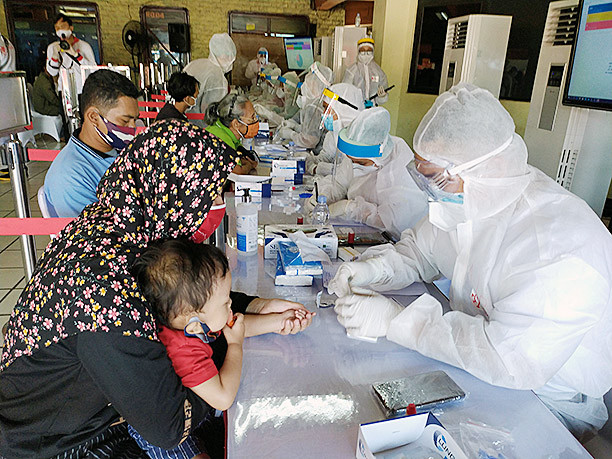 A mother helps her son get tested for COVID-19 at the Kampung Rambutan terminal in Jakarta on June 4. More than 200 newborns and children under 5 years of age are believed to have died from COVID-19 in Indonesia as the virus has devastated the country’s fragile health system. (JP/P.J. Leo)

Doni did not elaborate on which regions were identified as high-risk zones. However, he said the number was a decrease from 108 red zones reported three weeks ago.

Doni said that President Joko “Jokowi” Widodo had instructed the task force to prioritize the 57 COVID-19 red zones. The Army general added that Jokowi had also asked for the involvement of all stakeholders, including the Indonesian Military as well as the National Police in the country’s efforts at containing COVID-19.

Some 236 prisoners who were released early in an effort to curb the spread of COVID-19 behind bars, have reoffended, Law and Human Rights Minister Yasonna Laoly said earlier today.

“Most of the offenses committed by the ex-prisoners were theft,” Yasonna added. The minister said that the crimes also included drug abuse. Yasonna gave an assurance that his office would crack down on the prisoners who had reoffended.

The 236 cases were reported in 29 provinces across the country.

The Law and Human Rights Ministry has released 40,026 prisoners from 525 detention facilities under the COVID-19 assimilation and integration program. Official data show that Indonesia has a total of 270,386 prison inmates, more than twice the official capacity of its detention facilities.

Tangerang Mayor Arief Wismansyah lauded Wahidin’s decision to extend the PSBB in Greater Tangerang. Arief, however, said the extension would not greatly affect people’s activities given that restrictions for a number of sectors in the regions had been previously relaxed.

The Energy and Mineral Resources Ministry and House of Representatives Commission VII overseeing energy have agreed on the energy assumption for the draft 2021 state budget. The Indonesian crude price (ICP), for instance, is set within the range of US$42 to $45 per barrel. Moreover, the total oil and gas lifting target is determined at the range of 1.68 million to 1.72 million barrels of oil equivalent per day (boepd) with oil accounting for 690,000 to 710,000 barrels per day (bpd) and natural gas for 990,000 to 1.1 million boepd. The ministry and the Commission VII also agreed to set cost recovery at $7.5 billion to $8.5 billion.

The Finance Ministry and Bank Indonesia (BI) are mulling a burden-sharing scheme for the national economic recovery program (PEN) after disagreeing over the past month. Finance Minister Sri Mulyani Indrawati said the interest cost for public goods financing, estimated at Rp 397.6 trillion (US$28 billion), will be fully handled by BI. On the other hand, interest cost for non-public goods financing such as economic relief programs for micro, small and medium enterprises (MSMEs), as well as large corporations will be fully borne by the government or through a discounted interest rate. In total, BI is expected to bear 53.9 percent of the total interest cost.