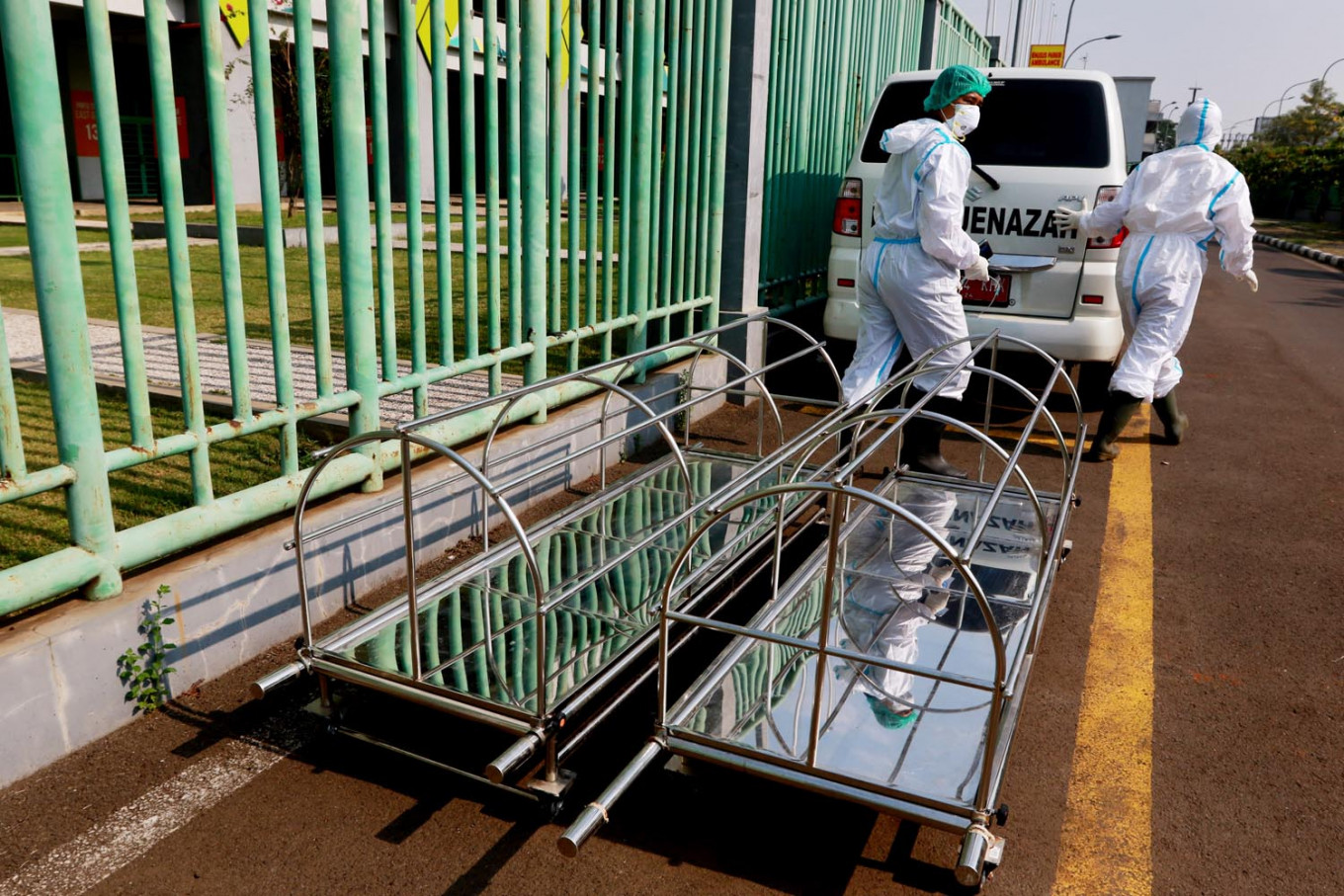 Medical personnel roll out biers from an ambulance in the Patriot Candrabhaga Stadium in Bekasi, West Java, on Oct. 2. The ambulance will be used to pick up asymptomatic COVID-19 patients who will undergo independent isolation at the stadium. JP/Dhoni Setiawan(JP/Dhoni Setiawan)

Indonesia’s low testing rate has persisted seven months into the COVID-19 pandemic, as laboratories throughout the archipelago face problems ranging from limited testing kits to delays in reported results.

The latest World Health Organization situation report on Indonesia highlighted the need for the country to increase its lab capacity to ensure all suspected cases were tested. WHO data showed a widening gap between suspected cases and the number of people tested. The country's COVID-19 positivity rate is also hovering in the teens.

Lab managers and doctors from eight regions in Indonesia told The Jakarta Post that government procurement of reagents, the chemicals used to detect the presence of the coronavirus in samples, had improved. But they said there was more to testing than reagents.

Almost all the doctors and health managers interviewed by the Post said that testing had to be improved but that it was not solely up to the labs. While some labs have more samples than they can handle, others are operating below capacity.

Regional administrations have announced their readiness to carry out the first stage of mass COVID-19 vaccination. However, uncertainties still linger as they have yet to receive any details on the vaccination plan, which has been scheduled to take place next month.

West Java Governor Ridwan Kamil said his administration had run a simulation of mass vaccination in Tapos Health Center, Depok on Thursday. The simulation was intended to check the adequacy of West Java’s health infrastructure as well as to calculate the required number of health workers to carry out the vaccination.

Regardless, West Java Health Agency head Berli Hamdani Gelung Sakti affirmed that the West Java administration had yet to receive any confirmation pertaining to vaccination schedule. According to Berli, the letter that he received from the Health Ministry only said that the mass vaccination would be carried out in November, without stipulating the exact date.

Previously, the Health Ministry’s disease control and prevention director general, Achmad Yurianto, sent an official letter to heads of provincial health agencies across the country. The letter reportedly announced the central government’s mass COVID-19 vaccination plan would be carried out gradually next month. Those who will receive the vaccination in the first stage include health workers, support staff working in health facilities, public service officers and members of the working age population.

Ahead of next week’s long weekend, the COVID-19 task force has urged regional administrations to double the number of rapid tests for mass testing, particularly targeting those who plan to travel during the long holiday. COVID-19 task force spokesperson Wiku Adisasmito said the rapid tests would help the government to screen and identify areas where COVID-19 transmissions proliferates.

“All provinces must carry out massive testing and tracing efforts so that COVID-19 transmission can be detected at an early stage and widespread infections can be prevented. The central government strongly encourages mass rapid tests, particularly during the long weekend next week,” said Wiku on Thursday.

Wiku highlighted how the last two long weekends in May and August had resulted in a sharp increase of new COVID-19 cases. “Long public holidays have been proven to have an adverse impact on the number of COVID-19 cases at the national level,” said Wiku.

President Joko “Jokowi” Widodo has conveyed his disappointment over the bad press surrounding the Job Creation Law, blaming his Cabinet members for poor public relations regarding the controversial legislation.

Presidential Chief of Staff Moeldoko said Jokowi considered lackluster public communication on the government’s part to be the major cause of widespread opposition to the jobs law in recent weeks. “We were all scolded by the President, our public communication was indeed very poor,” Moeldoko said at the Presidential Palace in Jakarta on Wednesday as quoted by kompas.com.

Every Cabinet member has committed to rectifying their approach to public communication, particularly in regard to the omnibus jobs law to minimize misunderstanding, according to him. “We will immediately reflect on [our errors] for future improvement,” Moeldoko said, adding that the government had been overwhelmed by the sheer amount of “disinformation” on social media regarding the jobs law.

Jokowi previously claimed that criticism of the law was merely based on “disinformation and hoaxes spread through social media”. The President’s statement drew the ire of jobs law critics and protesters as they maintained that the public had been denied access to the final draft of the legislation.

Budiman was named a suspect and arrested on Thursday. Budiman, who will be detained for the next 20 days for further investigation, is linked to the flow of illicit funds amounting to Rp 686,185,000 (approximately US$46,500) from the projects.

At least six indexes in the Indonesian Stock Exchange are currently rebalancing for the November 2020 – April 2021 trading period including the Bisnis-27 index, the MNC36 index and the SMInfra18 index. Bisnis27 and MNC36 indexes are replacing some stocks in the their lists while the SMIInfra18 index is increasing one of their members’ weight.

This is an opportunity for investors to rebalance their portfolios. Investment managers are ready to structure their index-oriented mutual funds and exchange traded fund (ETF) portfolio.

Although analysts believe that this restructuring will not have a significant impact on the indexes and its derivatives, newcomers on these indexes will still benefit from the positive sentiment. In the short-term, their stock prices might increase along with the rise in liquidity due to investors’ rebalancing act.

Furthermore, equity funds could be a good choice for investors amid the slump as they recorded 0.52 percent growth in September 2020. Equity funds are the only type of conventional mutual funds that booked an increase in that period.

The Bakrie Group has been accused of involvement in the Jiwasraya corruption case. PT Hanson International Tbk CEO Benny Tjokrosaputro, who has been sentenced to life in prison, said that Jiwasraya had sold all of Hanson’s shares in 2016, which brought around Rp 25 billion (US$ 1.7 million) in profit for Jiwasraya.

Furthermore, Benny also said the attorney had failed to prove his role in controlling the trade of 115 shares managed by 13 investment managers through 21 mutual funds.

In the same trial, another suspect in the Jiwasraya case, Heru Hidayat, also pleaded not guilty for his life sentence and opposed the confiscation of his assets. According to his lawyers, the calculation for the state losses was against the law as it was still based on unrealized losses. This means that the stocks in Jiwasraya’s portfolio can still be sold following the market price fluctuation.

Aside from a life sentence, Benny and Heru have been ordered to pay Rp 6.08 trillion and Rp 10.78 trillion in compensation, respectively.

President Joko “Jokowi” Widodo has directed his ministers and local government heads to accelerate the disbursement of the national economic recovery (PEN) program budget to offset the drop in people’s purchasing power.

The decline in purchasing power is indicated by deflation in June, July and August. Inflation started to pick up a bit by 1.42 percent year on year (yoy) in September. Year-to-date inflation (Jan. 2020 to Sep. 2020) grew only by 0.89 percent compared to the same period in 2019.

President Jokowi asserted that unlike in previous years, Indonesia now needed to maintain inflation rather than deflation. He hoped that the government’s various social assistance schemes would improve household consumption, which would lead to increasing demand that subsequently stimulated growth of supplies from producers.

A consortium led by CT Corp Infrastructure Indonesia is the only entity to pass the prequalification stage of a tender to manage the new Patimban port in West Java. Two other unsuccessful participants, however, plan to lodge a complaint and demand an explanation from the Transportation Ministry’s tender committee.

The ministry’s spokesperson Adita Irawati said that as the prequalification stage resulted only in one participant, the government could directly appoint the CT Corp-led consortium as the operator of Patimban port.

PT Samudera Indonesia CEO Bani Maulana Mulai and PT Temas Port Japie Ernest Tasijam said they would file a complaint letter and ask the tender committee for an explanation why they did not pass the prequalification stage.

The recently passed Job Creation Law enables foreigners to own apartments in certain areas, a relaxation of previous property ownership regulations that is expected to boost demand in the cooling property industry.

Article 144 paragraph 1 of the jobs law stipulates that ownership rights for apartments can be granted to foreigners, foreign legal entities and representatives of other countries or international organizations in Indonesia, in addition to Indonesians and Indonesian legal entities.

Other regulations, such as the Agrarian Law and Agrarian and Spatial Planning Ministerial Regulation No. 29/2016, allow only Indonesians to own apartments under full ownership rights, while foreigners can possess property under the right of use.

The omnibus law’s explanation of the article states that full ownership rights for foreigners and foreign entities only apply to apartments located in Special Economic Zones, Free Trade and Free Port Zones, Industrial Estates and other economic zones.

“If it gets implemented, the impact will be positive,” Arief Rahardjo, director of research and strategic consulting at real estate services firm Cushman & Wakefield, told The Jakarta Post via text message on Tuesday.

He added that the industry’s stakeholders should pay attention to whether there would be any further regulation that stipulated a minimum apartment price for ownership by foreigners. The law does not say if ownership rights will be further qualified in other regulations, nor does it set a minimum price.