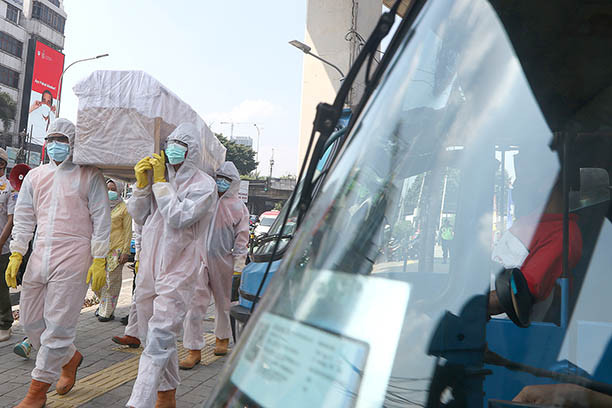 Ahead of the upcoming long weekend from Oct. 28 to Nov. 1, several regions have formulated strategies, including  limiting the number of tourists, strengthening health protocols monitoring and conducting rapid tests on tourists, to prevent a major increase in COVID-19 cases.

The National Police have named eight suspects in a fire incident that ravaged the main building of the Attorney General’s Office (AGO) complex in South Jakarta in August, concluding that worker negligence and careless use of flammable materials caused the blaze.

National Police spokesperson Insp. Gen. Argo Yuwono said the police had named the suspects after concluding its 63-day investigation, standing behind the previous conclusion that the fire was not caused by arson.

Five of the suspects were construction workers who were working on a project in the staffing bureau hall of the building’s sixth floor, where the fire allegedly started. Their foreman was also named a suspect.

The general crimes director of the National Police’s Criminal Investigation Department (Bareskrim), Brig. Gen. Ferdy Sambo, said the construction workers smoked cigarettes when working in the hall with flammable materials such as thinner and construction-grade adhesive. The foreman, Ferdy said, also failed to supervise the workers.

The State Secretariat has completed its review of the Job Creation Law handed over by the House of Representatives with the law now ready to be signed by President Joko “Jokowi” Widodo, presidential expert staff member Dini Shanti Purwono has said.

She said after the final review by State Secretary Pratikno, the version sent by the House, which initially consisted of 812 pages, had been extended to 1,187 pages. The additional pages came from corrections of errors, as well as text and page formatting. She further said that Pratikno had also scrapped one article from the law.

The 1,187-page version no longer contains changes to Article 46 of Law No. 22/2001 on oil and natural gas. The article in question in the 812-page version gave the Energy and Mineral Resources Ministry the authority to approve tariffs for transporting natural gas by pipeline or toll roads – a process that is currently under the jurisdiction of the Downstream Oil and Gas Regulatory Agency (BPH Migas).

Pratikno also argued that there were no substantive changes in the final version, saying that the change in the number of pages was caused by alterations in the text and format.

Constitutional law expert Feri Amsari of Andalas University questioned the moves, saying that the State Secretary had no authority to revise the jobs law after it was passed by the House.

No revision should occur after the controversial omnibus jobs bill had been passed into law, and doing so was a “blatant violation” of the prevailing law.

The Elections Supervisory Agency (Bawaslu) has discovered an increase in health protocol violations as the end of the campaign period for this year’s simultaneous regional elections nears. Regional head candidates have reportedly justified any means to reach voters.

Association for Elections and Democracy (Perludem) director Titi Anggraini said that campaign violations were mounting even before the COVID-19 pandemic. Titi said that the violations were previously dominated by money politics and politicization of civil servants. During the pandemic, Titi said that candidates were insisting on conducting face-to-face campaign, hosting campaign rallies and thus gathering people in large numbers.

The COVID-19 pandemic has exposed Indonesia’s uneven distribution of health care, as seen in the number of health facilities, doctors and labs that are concentrated on the country’s most populous island, Java.

Indonesia, with some 271 million people, has 0.13 specialist doctors per 1,000 people, less than half the government’s target of 0.28 per 1,000 people as part of its health reform program, according to the National Development Planning Agency.

The figure for general practitioners is 0.52 per 1,000 people, less than half the target of 1.12. And hundreds of them have been lost to the COVID-19 epidemic as of Oct. 24, when the country commemorated National Doctors Day.

Office of the Coordinating Economic Minister undersecretary for the macroeconomy and finance Iskandar Simorangkir said that the government remained optimistic that the PEN could be disbursed smoothly despite having only reached Rp 344.43 trillion (US$23.49 billion) or 49.54 percent disbursement from the total Rp 695.2 trillion.

The government plans to change the funds disbursement strategy from programs that have been experiencing sluggish progress to programs that smoothly disburse funds. The government will also rearrange the PEN programs by figuring out which areas need an additional budget.

Despite the relatively smooth state budget disbursement, Center of Reform on Economics (CORE) researcher Yusuf Rendy Manilet said that the biggest task currently was to boost disbursement from regional governments.

State-owned metal miner PT Aneka Tambang (Antam) is planning to take its gold-producing business wing to the stock market via an initial public offering (IPO). Antam has made a dedicated transformation unit for its gold processing and refinement business.

“Antam also sees high growth opportunity in gold sales in the future,” said Antam senior vice president corporate secretary Kunto Hendraprawoko. Gold business has significantly contributed to Antam’s revenue with total sales of Rp 6.41 trillion (US$ 437.5 million) or 69 percent of Antam’s total revenue in the first half of this year.

Gold has become increasingly sought after for investment and as a safe haven asset amid the looming recession. The gold price has increased 32 percent since the beginning of the year, reaching a price of Rp 1,008,000 per gram on Sunday. The rising gold price might attract gold producers who are interested in expanding their businesses.

However, gold prices tend to fluctuate after passing the Rp 1 million per gram psychological threshold. This fluctuation might hinder producers' interests in the IPO until the economy begins to stabilize.

Amid the price volatility in the Jakarta Composite Index (JCI), several stocks in the LQ45 index have been attracting investors’ attention due to their relatively solid financial performance and low valuation. Throughout 2020, the LQ45 performance has been corrected by 22.15 percent year to date, relatively underperforming compared to the JCI’s 18.85 percent decrease in the same period.

However, some LQ45 issuers are worthy of buying. Twelve issuers in the LQ45 index have a low valuation with a price to earnings ratio (PER) below 10 times, which makes them attractive choices for investors. These issuers are SRIL, MNCN, WIKA, PTBA, ITMG, BBNI, GGRM, UNTR, TKIM, ASII, ADRO, and PTPP. Although these stocks are not cheap, their financial performances have good growth potentials.

Nevertheless, investors are still waiting for the third quarter financial report to help them make investment decisions. As of Sunday, only two LQ45 issuers had released their financial reports, namely UNVR and BBTN.

Despite the challenging environment the COVID-19 pandemic has created for start-ups seeking to raise funds, investors have signaled there is still an appetite to invest in Indonesia, albeit with more calculations involved.

During a webinar hosted by The Jakarta Post in August, Sequoia Capital Singapore managing director Abheek Anand noted that Indonesia was one of the few large economies in the region that could support multiple stand-alone domestic businesses that made sense for large investors like Sequoia to invest in, suggesting that the country’s potential for start-up growth lay in its ever-expanding domestic market.

According to data from start-up information platform DealStreetAsia, out of the US$2.7 billion in fundraising deals booked in Southeast Asia in this year’s second quarter, 45.8 percent went to Indonesian start-ups. This made Indonesia the biggest absorber of investment funds during the period. Singapore came second by booking 33.2 percent of the deals, while Vietnam followed with 7.9 percent.

However, in the third quarter of this year, deal-making in Indonesia was “sluggish”, according to the DealStreetAsia review, with fundraising dropping more than 50 percent relative to the second quarter and year-on-year. Singapore replaced Indonesia as the region’s top investment destination in the third quarter, the report notes.

A job information provider site has recorded an increase in the number of job hunters during the COVID-19 pandemic. Jobstreet Indonesia country manager Faridah Lim said, “Usually, for one job position, there are 400 people applying for the job, now it can reach 800 people, even for some job positions it can be thousands.” Jobstreet site also saw increase in site hits, rising 11 percent to 300 million hits per month from April to June.

The significant increase in the number of job hunters was caused by the global economic slowdown that led to layoffs and other efficiency measures. It is estimated that the pandemic will raise unemployment to 4 million to 5 million people by the end of year, without a corresponding increase in job opportunities. Farida said there were only 8,000 job openings in April and May, while there used to be around 30,000 job opportunities every month.

However, the situation has slightly improved since the relaxation of large-scale social restrictions into the transition period. “Until the September period, job opportunities had reached 20,000 positions per month.” Jobstreet noted that the main occupations in demand were customer service, administration and human resources.