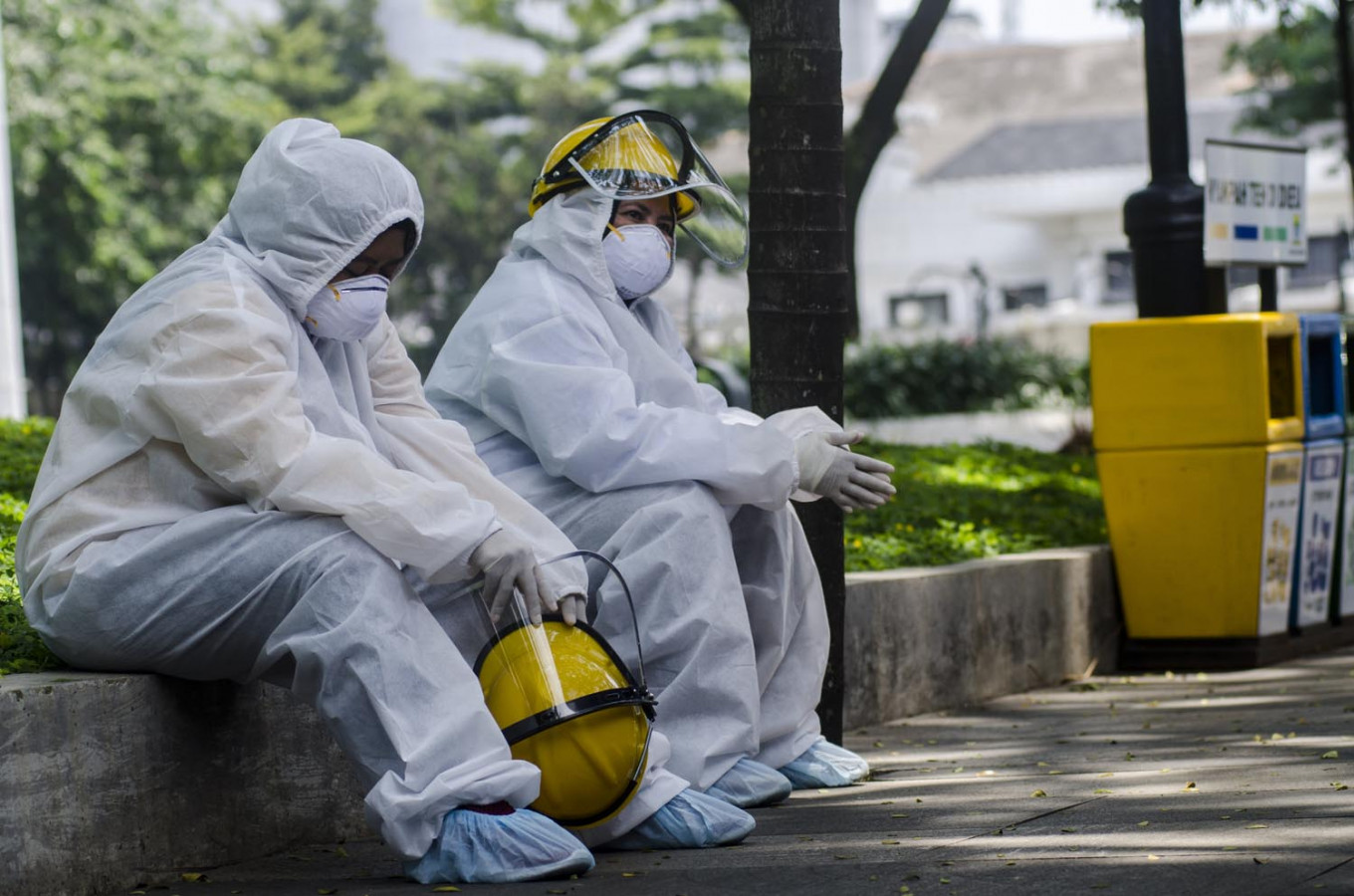 Passengers approach the rapid test area at Terminal 3 of Soekarno-Hatta International Airport in Tangerang, Banten, on July 29. Those who want to fly on domestic flights are required to show a rapid test results valid for 14 days. The airport provides a one-stop service for rapid tests that costs Rp 145,000 (US$9.90). JP/Dhoni Setiawan (JP/Dhoni Setiawan)

National COVID-19 Task Force spokesperson Wiku Adisasmito said Indonesia still had yet to meet the ideal testing capacity of 38,500 tests per day, according to World Health Organization (WHO) standards. Currently, he said, the country can only administer 20,000-22,000 tests per day.

The central government has been helping regional administrations increase their testing capacities by providing reagents for polymerase chain reaction (PCR) tests. According to Wiku, however, this assistance must be accompanied by an increase in testing facilities as they are still lacking in several regions. Therefore, the central government plans to evaluate the capacity of laboratories in these regions.

“We will focus on nine regions first and the results will later be announced to the public,” Wiku said on Tuesday.

Wiku has also asked local administrations to cooperate with private laboratories to overcome the disparity in resources, such as the availability of laboratories and the number of health experts.

The Jakarta administration forced eight companies to close temporarily during inspections on Monday over COVID-19 virus transmission and violations of health protocols. As many as 3,022 residents were also sanctioned for not wearing masks.

Jakarta Manpower, Transmigration and Energy Agency head Andri Yansyah said the authorities had found that several employees at five of the companies had tested positive for the coronavirus disease. Meanwhile, the three other companies were shut down for failure to implement strict health protocols.

“Of 64 companies inspected, eight were forced to temporarily shut down,” he said on Tuesday, as quoted by kompas.com.

The agency ordered the companies to stop operating for three days, as mandated by Gubernatorial Regulation No. 29/2020 on COVID-19 sanctions.

Meanwhile, as many as 3,022 residents were sanctioned for not wearing masks. According to Jakarta Public Order Agency (Satpol PP) head Arifin, of the total, 2,868 people were sanctioned with social work and the rest were fined.

The government has been unfazed by calls to postpone the 2020 regional elections amid concerns that the year-end poll could exacerbate COVID-19 transmission rates in the country.

Proposals to postpone the elections have emerged from the National Commission on Human Rights (Komnas HAM) and other civil society groups, especially when crowds of supporters accompanied candidates to register with their local General Elections Commission (KPU) offices.

However, the Home Ministry’s general politics and public administration director general, Bahtiar, said in a virtual discussion on Tuesday that the elections must go on and that it had been firmly decided by the government, the House of Representatives and the election organizers.

Bahtiar said prevention and control strategies for COVID-19 were in place and that the elections could be carried out safely if all parties adhered to health protocols. “It is only a matter of law enforcement,” he added.

The Prosperous Justice Party (PKS), the National Mandate Party (PAN), the National Awakening Party (PKB) and the United Development Party (PPP) factions at the House of Representatives are still waiting for the General Elections Commission (KPU) to enact stricter health protocols for the regional elections.

During a joint meeting with the KPU and the government, there have been no discussions on the postponement of the elections, only ways to tighten health protocols.

PPP House faction secretary Baidowi said that preventing the emergence of new COVID-19 clusters amid the elections would require the enforcement of the protocols.

House Commission II deputy chairman Arwani Thomafi, who is from the PPP, shared the sentiment and said that it was mandatory to enforce stricter protocols and sanction those who violated them.

The Corruption Eradication Commission (KPK) has come under fire for requesting an additional Rp 825 billion (US$55.48 million) for its 2021 budget amid the COVID-19 pandemic to certify more graft-prevention agents.

House of Representatives Commission III overseeing legal affairs on Monday approved the proposal, which according to the agency’s chief Firli Bahuri would be used to increase the number of anticorruption counselors and integrity experts. It will then pass the proposal on to the House budget committee (Banggar).

Kurnia Ramadhana of Indonesia Corruption Watch (ICW) questioned the urgency of the additional funds, saying the KPK's request was unacceptable as the country was now facing a difficult fiscal situation as a result of the pandemic.

The KPK, he said, also had not made any remarkable achievements under Firli's leadership.

“Having more agents is great, but the KPK doesn’t deserve a raise because it has not made any achievements, especially given this difficult situation. The KPK must evaluate itself and have a sense of crisis,” he told The Jakarta Post on Tuesday.

The KPK initially requested Rp 1.88 trillion for its 2021 budget. However, the government agreed to allocate only Rp 1.05 trillion.

The COVID-19 pandemic has greatly affected all aspects of the economy, including the stock market. According to Bisnis Indonesia data, only four out of 36 issuers affiliated with 12 of the richest Indonesians managed to record growth on a year-to-date basis per Sept. 14.

Overall, the total value of these 36 issuers has shrunk Rp 315.5 trillion from Rp 1.56 quadrillion by the end of last year to Rp 1.25 quadrillion  by the beginning of this week.

Hartono brothers, owners of the Djarum Group, saw a Rp 96.15 trillion loss in their shares in Bank Central Asia. However, they also managed to gain a slight increase in market capitalization through PT Sarana Menara Nusantara (TOWR), which booked Rp 10.67 trillion growth.

Despite being pressured, some of the stocks affiliated with these conglomerates are still deemed attractive for investors due to their liquidity and good fundamentals.

The government is silently preparing a draft of the omnibus bill on the financial sector amid the controversy surrounding the Bank Indonesia (BI) Law revision and the government regulation in lieu of law (Perppu), which are predicted to cut off the central bank’s independence.

This plan is predicted to bring some negative reactions from the market. Since these plans emerged to the public, foreign investors have started to exit from Indonesia, taking with them Rp 29.35 trillion.

Three main points underlie the creation of this new omnibus bill. First, the bill could become a solution and innovation to solve regulatory barriers in several laws related to financial services. Second, the bill aims to develop and strengthen the financial sector so it will be included in the national legislation program. Third, the drafting of the bill will be supported by an academic draft.

The bill is seen as a middle ground since releasing a Perppu might be seen as a desperate move. The substance of this omnibus bill is also similar to the circulated Perppu draft, said Kontan’s source.

The bill will harmonize some regulations and distribute the tasks in financial sectors through maximizing the roles of BI, OJK, Finance Ministry, and the Deposit Insurance Corporation (LPS). Sri Mulyani did not deny the rumor of this new omnibus bill. “We will announce it in due time,” she said.

The government and the Financial Services Authority (OJK) said financial literacy among Indonesians was very low, at only 38 percent, while the financial inclusion had reached 76 percent. As a result, many Indonesians had lost money in bogus investments.

The OJK's commissioner of consumer protection and education, Tirta Segara, explained that an OJK survey found that many people had invested in products they had little knowledge of.

Tirta explained that OJK would target to improve the financial literacy among millennials as they account for 30 percent of the total Indonesian population.

Budi noted that financial education among Indonesians is more important now as the number of wealthy people is still very small. The number of Indonesians with wealth of between $100,000 and $1 million is only 1.87 million people or 1.1 percent of its total population, compared to 10.7 percent average in the Asia Pacific region.

Indonesia failed to continue an upward trend in monthly exports in August as slow global economic recovery reduced demand for the country’s products. Southeast Asia’s largest economy recorded US$13.07 billion in exports in August, down 4.62 percent compared to July and down 8.34 percent annually, as the pandemic upended global demand, Statistics Indonesia (BPS) announced on Tuesday.

The country recorded month-on-month (mom) export growth in June and July after contractions in April and May, during which Indonesia implemented strict movement restrictions.

Exports of oil and gas products fell 27.4 percent year-on-year (yoy) to around $610 million in August, while exports of mining products decreased 24.7 percent yoy to $1.39 billion due to falling commodity prices.

At the same time, shipments of agriculture products rose 1.04 percent yoy to $340 million as manufactured goods exports dropped 4.5 percent to $10.37 billion in August.

The Transportation Ministry’s director general of air transportation, Novie Riyanto, said the government would build 10 new airports in the next five years. The 10 airports are to facilitate and boost economic growth of the regions around the new airports.

“The main consideration about building the new airports is about the needs of the people and to transport their produce to other regions using air transports,” Novie said.

The government is still looking for funding sources for the new airports. It could be totally funded by the state budget or in partnership with the private sector.