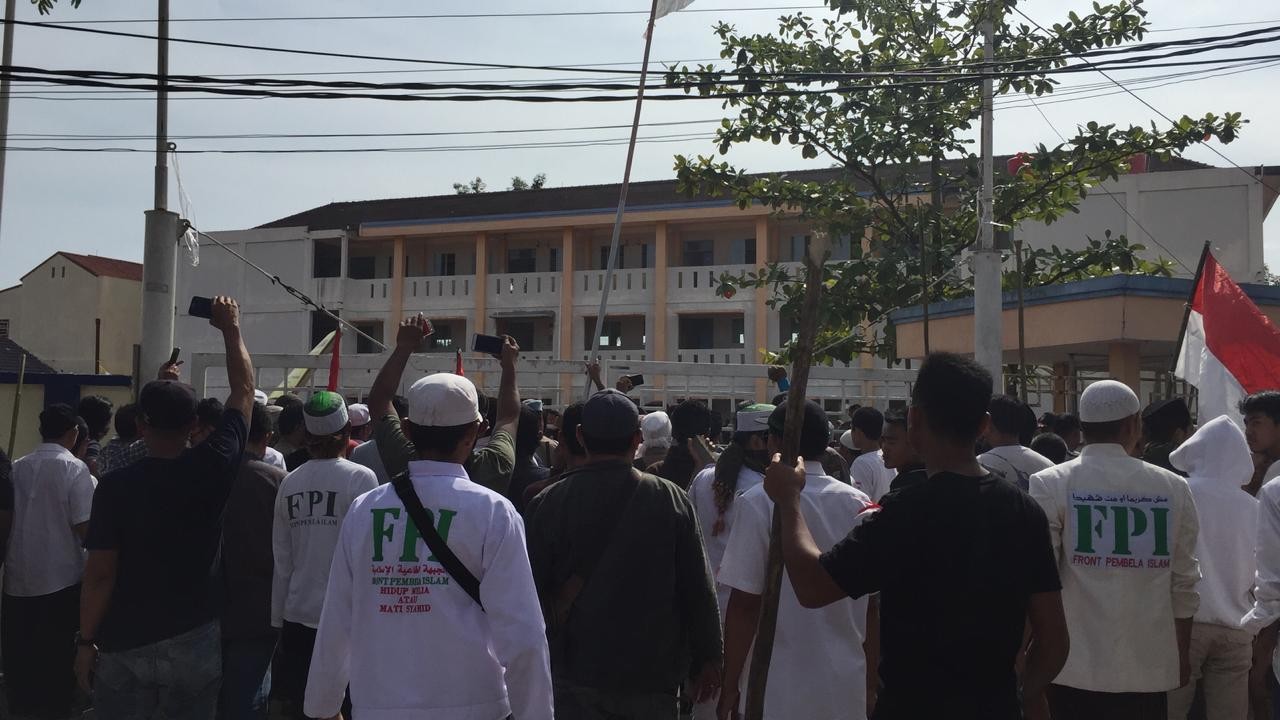 A group of people, including members of the Islam Defenders Front (FPI), protest against a vocational school in Batam, Riau Islands, on Nov. 16, 2018 because they believed it to be Christian. The FPI now claims to support Pancasila, which would require it to accept the rights of other religions and beliefs. (The Jakarta Post/Fadli)

Religious Affairs Minister Fachrul Razi has asserted that he will urge the government to extend the registration permit of the hard-line Islam Defenders Front (FPI) after the organization reportedly pledged its loyalty to the five principles of Indonesia’s state ideology Pancasila. In justifying his support, Fachrul claimed that Islamic mass organizations that took part in developing the country should be supported. Fachrul has reportedly discussed the matter with Home Minister Tito Karnavian and Coordinating Political, Legal and Security Affairs Minister Mahfud MD.

Fachrul’s statement, however, has drawn criticism, including of President Joko “Jokowi” Widodo, as it is assumed that Fachrul’s wishes reflect those of Jokowi, with some analysts urging Jokowi to remain unafraid to take measures against the hard-line organization.

The FPI's organizational permit expired on June 20 and it applied for an extension through the Home Ministry, which declined it since the organization still had to obtain a recommendation from the Religious Affairs Ministry, as well as fulfilling other administrative requirements.

The Constitutional Court (MK) has rejected a request for a judicial review of the controversial revision of the Corruption Eradication Commission (KPK) Law lodged by a group of university students. Chief Justice Anwar Usman said the court’s rejection was the result of an “error in objecto” in the judicial review request. More specifically, Justice Enny Nurbaningsih said the request wrongly cited Law No. 16/2019 on marriage as the object of the judicial review instead of the correct Law No. 19/2019 on the KPK.

Dozens of students from various universities lodged a request for a judicial review against the revised KPK Law in September. In their request, the students particularly scrutinized the law’s stipulation that required KPK leaders to have a good track record and linked the stipulation with the questionable track record of the KPK’s newly elected chairman Firli Bahuri. The students also challenged the legislative process of the law, stating that there were only 80 members of the House of Representatives present during the passing of the law.


House does not promise to follow up PBNU recommendation on presidential elections
Tempo, (https://tinyurl.com/thcaxe4)

House of Representatives speaker Puan Maharani has stated that House Commission II overseeing home affairs will not immediately follow up the recommendation proposed by the central board of the country’s largest Muslim organization Nahdlatul Ulama (PBNU) regarding the implementation of indirect presidential elections. According to Puan, the House will first evaluate the pros and cons of the indirect electoral mechanism.

President Joko "Jokowi" Widodo has laid out his economic strategy to resolve the country's current account deficit (CAD): resource-based industrialization. "Our CAD problem has not been resolved for a long time, but I am confident that we can solve it through economic transformation," the President said at the Kompas 100 CEO Forum today.

"Going forward, our main economic agenda will be increasing exports and reducing imports through substitution. In addition, [we should] obtain as much foreign exchange as possible through the development of tourism, as well as attracting more foreign direct investment, for which the Investment Coordinating Board (BKPM) has the main responsibility," Jokowi told the audience.

Indonesia's accumulative CAD from the first to the third quarter of 2019 reached US$ 7.7 billion or 2.7 percent of GDP.

The Jakarta Prosecutor's Office (Kejati) has found sufficient evidence to raise the investigation status of graft in state-owned insurance company Jiwasraya. Prosecutors revealed on Thursday that the evidence related to the sales process of Jiwasraya's controversial bancassurance product, JS Saving Plan, as well as irregularities in the revenue obtained from the bancassurance sales. The prosecutors have interviewed 66 witnesses and appointed auditors to calculate potential state losses from the alleged graft.

The Investment Coordinating Board (BKPM) is currently reviewing all licenses and permits across government institutions that have hindered the inflow of foreign investment to Indonesia. To identify the source of the problem, the BKPM classifies all licenses and permits into two categories: administrative and technical permits. The BKPM will take over the issuance of administrative permits, but the income generated from the permits issuance, which is classified as non-tax income (PNBP), will be given to the ministries and agencies that were responsible for issuing them.

To streamline all business licensing processes toward the BKPM, President Joko “Jokowi” Widodo has issued Presidential Instruction (Inpres) No. 7/2019. The Inpres also grants the BKPM the authority to review policies deemed unfavorable for foreign investors.

Property giant Lippo Karawaci and Japan’s Softbank announced on Thursday their strategic alliance to develop a smart city that utilizes artificial intelligence (AI) and the internet of things (IoT) technology. Lippo Village in Karawaci will become the pilot location for implementing this technology, specifically by using smart cluster management and smart traffic management.

Smart cluster management will use CCTV that can recognize the faces of Lippo Village residents, even when they are in a vehicle, as well as the license plates of their vehicles, separating residents from unknown visitors.

Smart traffic management is a technology that uses smart CCTV to count the number and identify the different types of vehicles that enter an area.
Download PDF