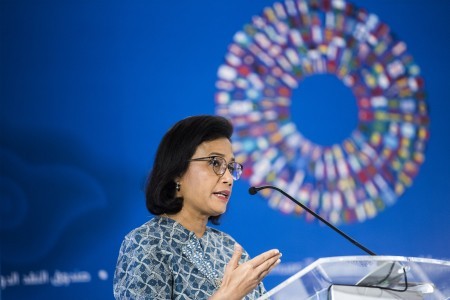 In a video screened during the 212 rally reunion at the National Monument (Monas), Central Jakarta, today, during which the anniversary of the 2016 street protests that called for the prosecution of then-Jakarta governor Basuki “Ahok” Tjahaja Purnama for blasphemy was commemorated, Islam Defenders Front (FPI) leader Rizieq Shihab claimed that he was banned from returning to Indonesia and, thus, could not attend the event. “I am still being prevented by the Saudi Arabian government from returning home due to security reasons. [The banning is] as requested by the Indonesian government,” Rizieq claimed.

2 Alumni Brotherhood (PA 212) chairman Slamet Ma’arif then compared Rizieq’s circumstance with that of Ahok’s, who was recently appointed the president commissioner of state-owned energy company Pertamina. “This is related to what happened in 2016. While Ahok’s blasphemy case has been closed, and Ahok himself is now Pertamina’s president commissioner, Rizieq’s exile still continues in contrast,” Slamet said.

Slamet then added that his party would take to the streets if Rizieq was barred from returning to Indonesia.

The House of Representatives Commission VIII overseeing religious and social affairs lamented the issuance of Religious Affairs Ministerial Regulation No. 29/2019 on majelis taklim (Quran study group), which requires that all Quran study groups be certified by the ministry.

“Such requirement is too excessive. They [Quran study groups] are not supposed to be regulated by the government,” said House Commission VIII deputy chairman Ace Hasan Syadzily.

Ace then said that the commission would summon Religious Affairs Minister Fachrul Razi to provide further clarifications regarding the subject. The lawmaker hoped that the regulation would be revised or even revoked.

A member of Airlangga Hartarto’s campaign team, Happy Bone Zulkarnain, claimed that President Joko “Jokowi” Widodo would not mind if Airlangga, who is also the coordinating economic minister, campaigned for his reelection as Golkar Party chairman. Happy said Airlangga did not have to formally ask for Jokowi’s permission to contest Golkar’s chairmanship race.

“The regulation does not require [Airlangga] to acquire the President’s permission. I think the President will not mind,” said Happy. However, according to Happy, as the President’s aide, Airlangga will still ask for Jokowi’s blessings.

Happy obtained a registration form on the Golkar Party’s chairmanship race on behalf of Airlangga earlier today at the office of the party’s central executive board in West Jakarta.
BUSINESS AND ECONOMICS NEWS AND HEADLINES
Erick Thohir to handle Jiwasraya
Bisnis Indonesia, (https://tinyurl.com/tfrsve6); CNBC Indonesia, (https://tinyurl.com/rb8ul9c)

President Joko Widodo has received a report from State-Owned Enterprises (SOEs) Minister Erick Thohir on PT Asuransi Jiwasraya’s financial problems. The SOEs minister informed him of the steps that would be taken to solve Jiwasraya’s liquidity issue, Jokowi said. The President has approved the plan. Nevertheless, Jokowi did not provide details of the steps proposed by Erick. Jiwasraya’s troubles first came to light in October 2018, when the state-owned insurance company was unable to pay its obligations to its customers. The company has Rp 802 billion (US$56.98 million) in overdue liabilities from its bancassurance products.

Finance Minister Sri Mulyani Indrawati plans to inject Rp 18.7 trillion (US$1.3 billion) in capital into state-owned enterprises (SOEs). Sri Mulyani said the planned state capital injection (PMN) in 2020 was expected to boost the role of SOEs in accelerating the country’s economic development. Moreover, the PMN will be divided among seven SOEs with one allocation specifically aimed at strengthening the current account balance. A state-owned electricity company received the largest PMN with Rp 5 trillion, followed by PT Hutama Karya, which received Rp 3.5 trillion.

PT PANN was the main topic of discussion at today’s House of Representatives meetings. One meeting was between the House’s Commission XI and Finance Minister Sri Mulyani Indrawati, while another was between the House’s Commission VI and the State-Owned Enterprises (SOEs) Minister Erick Thohir. Neither Sri Mulyani nor the House members have any knowledge regarding the state-owned company.

PANN began as a financial company in the maritime sector, specifically providing financing services for ship procurement, but its line of business has since expanded. "From the beginning, the company’s core business has lacked focus. It has two hotels and 22 drinking water companies as subsidiaries now," Erick said. He plans to reorganize SOEs to synchronize their existing businesses with their core lines of business.

PT Investree Radhika Jaya has recorded Rp 4 trillion (US$284.21 million) in lending year-to-date as of the end of November. Of this, Rp 2.97 trillion has been disbursed in loans. The average rate of return is 16.2 percent per annum. Investree’s success rate for obtaining loan repayments within 90 days after the due date (TKB-90) is 98.87 percent. The company also opened a booth at the Fintech Exhibition in Surabaya from Nov. 29 to Dec. 1, helping potential clients, specifically small and medium enterprises (SMEs), to get quick and easy access to funding.
Download PDF