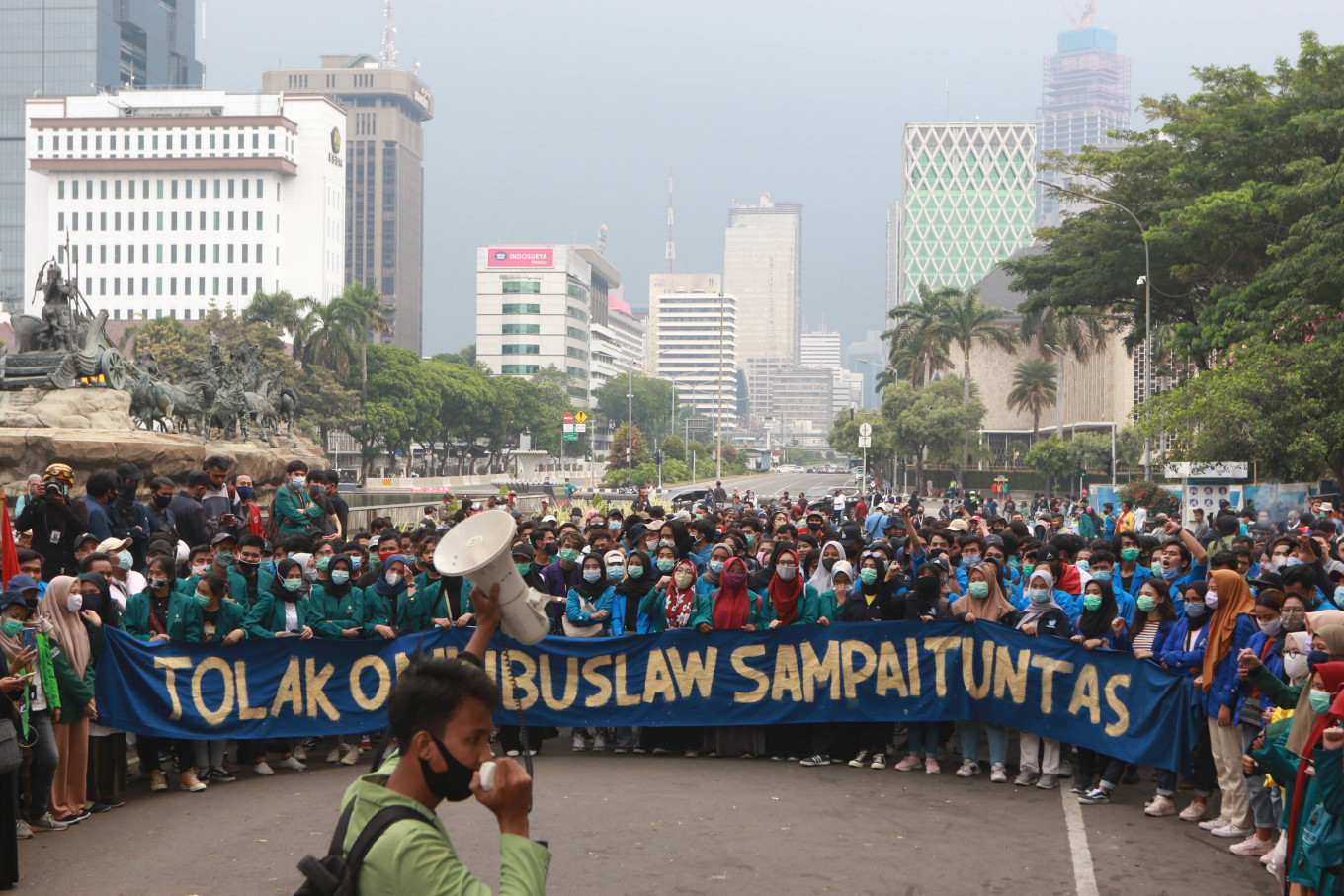 University students took to streets again today, continuing their protest against the controversial Job Creation Law. National Association of University Student Executive Bodies (BEM-SI) coordinator Remy Hastian said the students would also issue a vote of no confidence on the government and its representatives.

Remy added that the demonstrations would be conducted peacefully and free from any anarchist actions. “The rallies will serve as a reflection of the intellectual and moral movement of Indonesian university students,” asserted Remy.

Remy added that the demonstrations would be conducted peacefully and free from any anarchist actions. “The rallies will serve as a reflection of the intellectual and moral movement of Indonesian university students,” asserted Remy.

The Confederation of Indonesian Trade Unions (KSPI) has asserted that it will not participate in the deliberation of regulations to implement the Job Creation Law. “Workers reject the law; therefore, it’s impossible for us to accept or even to be involved in the discussion of the supporting regulations,” KSPI chairman Said Iqbal said in a statement on Thursday.

He conveyed his suspicion that the government only used the unions to legitimize the speedy deliberation of the law’s derivative regulations. Said went on to say that the workers felt betrayed, because the House of Representatives had not fulfilled its promise of involving unions in the omnibus law’s deliberation. “They didn’t listen to our opinions, even though we had submitted our feedback on a draft of the law.”

The KSPI stated workers’ protests against the Job Creation Law would grow bigger in the future. Apart from taking to the streets, the union would pursue legal measures against the recently passed law by requesting a judicial review by the Constitutional Court.

The majority of patients who were declared recovered on Oct. 15 resided in Central Java and Jakarta. On that day, 2,233 COVID-19 patients in Central Java recovered from the disease, bringing the total tally to 22,264 recoveries. Meanwhile, 1,050 patients in Jakarta, which has been Indonesia’s epicenter of COVID-19 transmissions, were declared recovered on the same day, bringing the total recoveries in the capital city to 75,881.

Inka to work on railway project in Congo next year
Kontan (https://tinyurl.com/yymxkyaz)

The Energy and Mineral Resources Ministry has prepared evaluations of eight geothermal fields for exploration activity, using data from the ministry’s Geological Agency. The ministry’s research and development head Dadan Kusdiana said the initial evaluation phase would be done at Cisolok field in Sukabumi regency, West Java, focusing on potential risks and their mitigation. The evaluation study will be conducted by a team consisting of expert staff for the energy and mineral resources minister, the Geological Agency and the Renewable Energy Directorate General.

Credit rating agency S&P Global Ratings downgraded publicly listed property developer PT Modernland’s bonds from SD to D following the company’s failure to make interest payments for its bonds amounting to US$240 million on Oct. 13. S&P concluded that Modernland would not be able to pay the interest, even after extending the payment for a 30-day grace period, due to the company’s poor cashflow. S&P also believes that Modernland needs to restructure its bond.